MANILA, Philippines – At roughly 4 am on November 5, Albuera Mayor Rolando Espinosa Sr breathed his last inside his cell at the Leyte sub-provincial jail in Baybay town.

For over 3 months, Espinosa had starred in an odd saga set in President Rodrigo Duterte’s war on drugs. On August 1, Duterte called on Espinosa and his son, alleged Eastern Visayas drug lord Kerwin, to surrender. He said a “shoot on sight” order had been issued to the police, should the two resist their warrantless arrest.

Even before the warning was issued, Espinosa was already inside Camp Crame, waiting for a chance to meet with PNP chief Director General Ronald dela Rosa.

What was supposed to be a chance to complain about death threats supposedly issued by the Albuera town police chief turned into a long wait for a surrender.

Espinosa was the first local chief executive to “surrender” to the police over his alleged ties to illegal drugs. Dela Rosa later confirmed that Espinosa was part of Duterte’s much-feared “list” of politicians, police, and judges with links to the contraband industry.

His death in the wee hours of the morning was a shock to many, including the policeman whom Espinosa had initially claimed threatened his life, Albuera chief of police Chief Inspector Jovie Espenido.

The supposed shootout inside the jail was triggered by the implementation of a search warrant against Espinosa and fellow inmate Raul Yap, for supposedly possessing firearms and selling drugs while inside jail. Criminal Investigation and Detection Group (CIDG) Region 8 personnel served the warrant.

Already, claims of “extrajudicial killing” in the incident have dominated news headlines. Senator Panfilo Lacson, who once headed the PNP, doubted the legitimacy of a “shootout.” Lacson now wants the Senate to reopen investigations.

Even as the Region 8 Internal Affairs Service (IAS) probes the incident, CIDG officials based in Camp Crame flew to Leyte to investigate. Dela Rosa, who was overseas and on leave when the shooting happened, promised there would be no cover-ups in the investigation.

Based on information made available to the public and conversations with sources privy to police operations and the investigation, Rappler pieces together at least 3 issues which investigators will have to answer:

Based on initial and progress reports from CIDG Region 8 police, a team composed of CIDG and Highway Patrol Group (PNP) personnel led by Chief Inspector Leo Lagara entered the Leyte sub-provincial jail at around 4:10 am on November 5.

They were there to serve two search warrants against Espinosa and Yap. It was Lagara who requested the warrant from the courts.

“A firefight ensued between the suspects (subject of the search warrant) and the CIDG8 operatives that resulted to the death of the said suspects,” reads an initial report on the operation. Police officials said they wanted to implement the warrant as soon as they got it. But since Espinosa and Yap were in jail anyway, it remains unclear why they decided to implement it at such an ungodly hour.

In interviews with media, Police Regional Office (PRO) 8 director Chief Superintendent Elmer Beltejar said neither the regional office nor the city police were informed about the warrants.

The CIDG team supposedly left only a document with a Baybay City station desk officer.

Neither was the CIDG headquarters in Camp Crame well informed about the operation. The CIDG director, Chief Superintendent Roel Obusan, was told only through a text message, according to a high-ranking police source.

Operational Support Units (OSUs) such as the CIDG typically operate autonomously from the top officials of Camp Crame, but when the target is a person as prominent as Espinosa, top police officials are expected to be privy to the conduct of any operation.

CIDG Region 8 chief Superintendent Marvin Marcos said that Lagara had asked for clearance to conduct the operation on Friday after the CIDG team got the necessary search warrants from the Samar Regional Trial Court Branch 30 in Basey, Samar.

The CIDG team is based in Tacloban City, which is roughly an hour’s drive away from Basey. Baybay City, where the jail is located, is more than 3 hours away by car from Basey.

Marcos, in turn, said he informed the PNP’s Tactical Operations Center based in Camp Crame through a text message. The same information was relayed to the CIDG headquarters which is also in Camp Crame – also through text message.

But CIDG Region 8 officials claimed they coordinated with the regional operations center.

The narration of events raises a few questions:

Speaking to reporters on Monday, November 7, PNP officer-in-charge and Deputy Chief for Administration Deputy Director General Francisco Uyami said that search warrants “normally can be served against a private property.”

But, he added, the law does not exempt government facilities from search warrants. The sub-provincial jail is run by the provincial government of Leyte.

Standard police operation procedure, said Uyami, is for a unit to coordinate with “territorial units.” That means the CIDG team was expected to at least coordinate or inform Baybay City police properly before the service of the warrant. The head of the jail, said Uyami, should have also been informed beforehand.

Dela Rosa, meanwhile, appeared to be not privy to the operation as he was on leave and in Las Vegas to watch the fight of senator-cum-boxer Manny Pacquiao.

The PNP chief told Rappler he learned of Espinosa’s death through a report forwarded to him while in the US.

According to the initial report on the operation, a “firefight” ensued between Espinosa and Yap, and the police as the warrant was being served.

The closed circuit television footage of the encounter, however, is missing. CIDG officials supposedly took it themselves.

Speaking to the Philippine Star, jail warden Homobono Bardillon said jail guards stopped the police from entering the compound because they could not produce a search warrant. 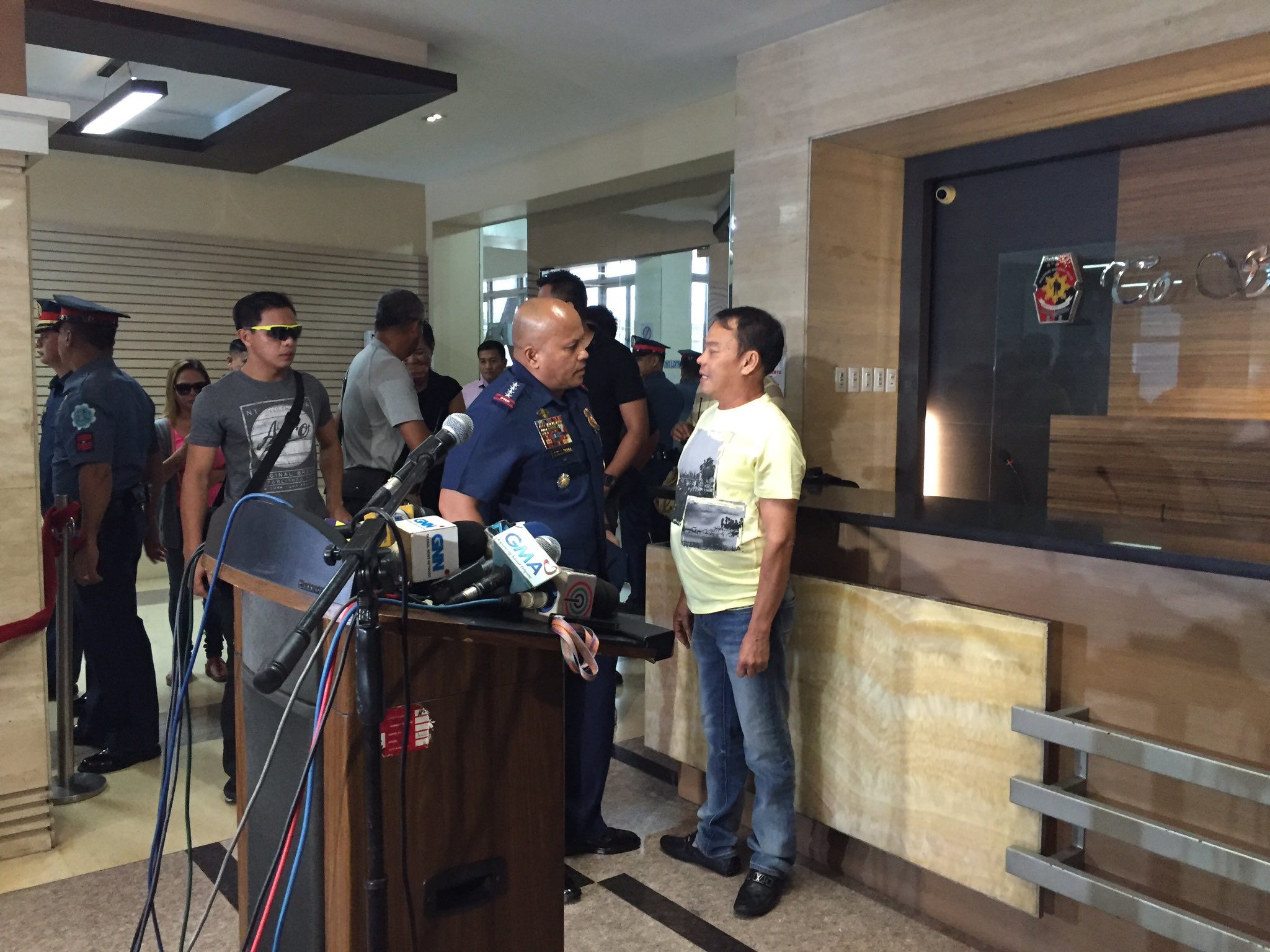 Citing information from guards on duty, Bardillon said Espinosa was heard “begging for his life.”

Investigators, however, cannot discount the possibility of distrust between police and jail guards. Given the Espinosas’ supposed wide web of contacts and payola benefactors, police have claimed that some jail officials were coddling the Albuera mayor – a possibility Bardillon denied.

An inmate who witnessed the supposed police operation claimed CIDG personnel cut off the CCTV just before they entered. Espinosa supposedly pleaded with the police for them not to plant evidence, said the inmate. He denied that Espinosa or Yap “fought back,” as the police claimed.

“They say Espinosa had a gun with him but he didn’t. We know that before the searching here is strict,” said the inmate in an interview with media on Monday, November 7.

The jail inmate said they were told by the police to stop and drop – and warned that they would come back to kill them if they squealed.

The CIDG insists their men were only defending themselves from the two, who had allegedly fired the first shots. All CIDG Region 8 operatives involved in the incident have since been “grounded” pending investigation.

Before he was killed, Espinosa executed several affidavits. Among the early affidavits was one done in Camp Crame, where he claimed that Espenido was threatening his life.

Ironically, a few weeks later, Espinosa returned to Albuera and vowed to cooperate with investigators in the town. He was eventually taken under the protective custody of the Albuera police led by Espenido himself.

Before the Albuera police, Espinosa executed two affidavits detailing what he knew about Kerwin’s illegal operations. In the document, the late mayor cited personal knowledge and records from Kerwin’s notebook of transactions, as proof of his claims.

In the first affidavit, which he executed some time in August, he named over 50 people – from politicians to police to barangay leaders – with supposed links to illegal drugs. These people either received “protection money” from Kerwin or had asked for a favor at one point or another.

In a second affidavit, signed only on October 3, 2016, Espinosa went into the details of the cash or gifts the supposed names in the payroll received. Majority of the cops on the list were posted in either Ormoc City or Albuera.

Throughout October, Albuera police filed cases before the Ombudsman and the PNP’s Internal Affairs service against several personalities named in Espinosa’s affidavit.

But Espinosa’s brother Ramon claims the affidavits were not done by Rolando Sr himself, but were “ready-made.” The Albuera mayor allegedly simply affixed his signature to it.

In an earlier interview, Dela Rosa said the investigation would also look into the possibility of the killing being related to Espinosa making public the contents of the log book, and his executing the subsequent affidavit about it. – Rappler.com