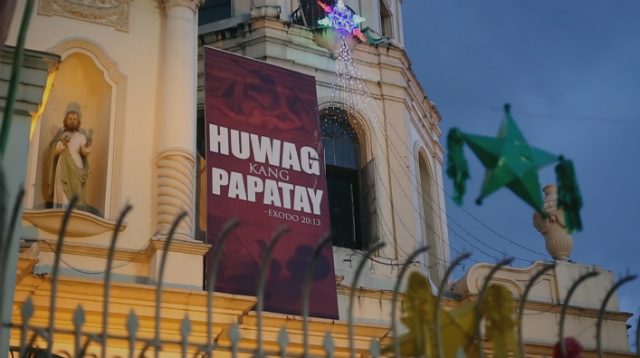 MANILA, Philippines – Sounds of gunfire roused 51-year-old Remedios Ocampo from her afternoon nap in one of the slums of Manila at around 6 pm on July 28, 2016.

Ocampo’s nephew, 24-year-old Gabriel Ocampo Garcia Jr, was reportedly killed by policemen for resisting arrest. Garcia had been accused of involvement in the illegal drug trade.

Garcia is among the over 6,200 people killed since July 1, 2016, when President Rodrigo Duterte launched his war on drugs.

Ocampo, on the other hand, is among millions of devotees of the Black Nazarene.

On Monday, January 9, Ocampo is set to join up to 8 million other devotees in the annual Black Nazarene procession in Manila, called the Traslacion.

For devotees like Ocampo, the Feast of the Black Nazarene is different this year, with the recent loss of relatives and friends in the war on drugs waged by the Philippine government.

Ocampo said she plans to pray for her nephew, as well as their other deceased relatives, during the Feast of the Black Nazarene.

(For my nephew who died, wherever he is right now, I wish his soul rests in peace even if such a thing happened to him.)

The recent killings in the Philippines pose an unprecedented challenge for the Catholic Church.

We asked Monsignor Hernando Coronel, rector and parish priest of Quiapo Church, which houses the 17th-century image of the Black Nazarene, about how Quiapo Church is caring for the victims’ families.

In an interview with Rappler, Coronel explained that the Archdiocese of Manila, which covers Quiapo Church, has a rehabilitation program for those involved in illegal drugs.

(On rehabilitation, this is not only for show before the media, but this is real. First of all, our response should be immediate, comprehensive, and without publicity.)

What about the spiritual needs of devotees who have had relatives who died in this spate of killings?

Quiapo Church, after all, is the spiritual refuge of millions of Filipinos.

For centuries, devotees have prayed before the miraculous image of the Black Nazarene.

Many of them coming from poor families, devotees pray for things that seem impossible. (READ: Making sense of the Nazarene devotion)

Coronel, for example, recalled a person who was blind but now can see, another who drowned already but survived, and a couple who remained barren for 8 years and now have a daughter named Olivia.

For devotees who lost their loved ones in the war on drugs, Coronel said faith in the Black Nazarene continues to matter.

(Sometimes it’s like that, for people who have painful wounds. If you already feel burdened, for instance if you’re sick and there’s stinging pain, it sometimes goes away if the Nazarene is there.)

(We really need to have faith because as they say, he will not give us trials that we cannot face.)

(For my fellow devotees who have relatives who died in the war on drugs, do not lose hope and continue to have faith in the Lord.)

Ocampo said she opposes the spate of killings in the war on drugs.

She added it is important to give a person due process. “Sabi nga, puwede naman ikulong, kung kailangan ikulong.” (As they say, we can always jail them if they need to be jailed.)

Other devotees of the Black Nazarene also gave their views on the war on drugs.

Nazarene devotee Michael Alexis Mino, 25, said he feels bad to hear about killings every day. “Lahat ng tao, nagkakamali rin, kaya kailangan mo talaga, ikulong na lang natin, huwag na nating patayin.” (All people make mistakes, so what we need to do is to jail them. Let us not kill them.)

Peter Bustamante, a 41-year-old Nazarene devotee, on the other hand said he favors the killing of drug suspects.

A devotee of the Nazarene for 5 decades, 70-year-old Lucila Lim said she does not believe that many drug suspects resist arrest – the common reason given by the police for killing them.

(You know, I say nothing else but that the Lord knows what to do – the one up there. I hope the Black Nazarene will perform a miracle, with all that these people are doing.)

In the face of all these killings, Quiapo Church, the home of the Black Nazarene, stands as a silent witness.

Hanging by the facade of this refuge for millions of Catholics, a red tarpaulin issues a stern warning: “Huwag kang papatay.” (Thou shall not kill.)   – Rappler.com