Koreans and crime in Angeles City 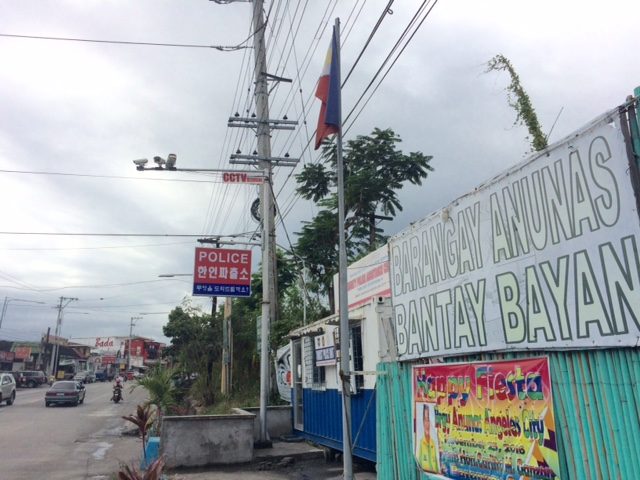 Facebook Twitter Copy URL
Copied
They have their own security desks, CCTVs and a specially-designated Korean police chief, but why are some Koreans in Angeles City still victimized or involved in crimes?

ANGELES CITY, Philippines – The atmosphere near Friendship Plaza in Barangay Anunas in Angeles City, Pampanga, was quiet, almost mysterious, weeks after news broke out that a resident was abducted inside the guarded subdivision, and later killed in Manila.

The victim was South Korean businessman Jee Ick Joo, a former executive of the Korean shipping firm Hanjin based in nearby Subic. His kidnapping-murder case is now the center of multiple investigations and has put in question the police-mandated anti-drug operations known as Oplan TokHang.

The cops suspected to be behind the murder allegedly arrested the Korean in the guise of legitimate TokHang operations. They would later ask Jee’s wife for ransom money even after they had killed the victim inside police headquarters in Camp Crame.

Friendship Road, where the subidvision is located, extends to the commercial center called Korea Town, the unofficial Gangnam district where Koreans in the city find almost everything they need. Unlike Americans, who have their own community in Angeles in the nearby Fields Avenue, Koreans are not keen to chat with strangers, especially reporters.

They do not respond when approached and asked how they feel for their safety following the incident. Locals explained that it does not necessarily mean they are afraid. They said that Koreans, at least in their city, usually just keep among themselves because many of them do not speak English fluently.

A businessman named Jong Pil Choi, after a moment of consideration, decided to share his sentiment. “I’m shocked to hear the news, especially that policemen were involved in the slay. But even though there is such a case, I feel safe,” Jong said, adding that he prefers to stay in the Philippines despite the urging of his friends in Korea to return home. There’s a reason for the more or less 20,000 Koreans in Angeles City to feel safe. For one, there are CCTVs installed around the Anunas district where most of them reside. The CCTV cameras were paid for by the Korean Community Association. The monitoring screens are inside police station 5.

They also have their own Korean Desk inside the Pampanga Criminal Investigation and Detection Group (CIDG) whose office is in Angeles. Heading the desk is Chief Inspector Lee Ji Hoon, a Korean police officer deployed to the Philippines since 2015.

According to Lee, there are 6 Korean desks nationwide. There is one inside Crame, the very first one to be established in 2012. The Angeles desk followed in 2015, and last year, they created desks in Malate, Cavite, Baguio, and Cebu.

Apart from the one in Crame, all Korean desks should be inside the regional offices of the CIDG. But in the case of Pampanga, instead of being in the Region 3 CIDG office in Camp Olivas in San Fernando, the Korean desk is inside the Pampanga CIDG in Angeles, indicating a specialized security system in the city.

This will be expanded further as Angeles City Mayor Ed Pamintuan, who had just come home from Rome to attend the peace talks, announced he will also set up a Korean desk inside city hall. Central Luzon is a favorite among Koreans, so much so that much of the investments of Koreans in the country are focused on the region, especially in Pampanga. Earlier this month, Korean-owned semiconductor company Phoenix announced it will expand manufacturing operations in Clark.

But business is not all that the province attracts. Over the years, authorities have found that Korean fugitives are in Pampanga hiding and operating a crime network.

“We find where they are then we request the Korean National Police Agency to put them on the red notice list, then we request the help of the Bureau of Immigration to catch them as undesirable aliens so they are deported and we follow up on the procedure,” Lee told Rappler.

In 2015, South Korea’s most wanted Lee Sang Te was arrested at a casino in Angeles. The fugitive Lee managed to live free in Pampanga for 6 years and even opened a hotel. Two years before that, in 2013, another top Korean fugitive Cho Yang-eun, said to be the founder of one of South Korea’s biggest gangs, was arrested also at a casino in Angeles. He entered the country as a tourist in 2011 and never renewed his visa.

“Living cost is very cheap here, it’s near Korea and in the Philippines, it’s very easy to hide,” Lee said.

He added: “The (Korean fugitives) think they can solve the problem with money. It means that they think they can buy officials from the BI or the PNP.”

Police sources in Angeles say crimes where Koreans are involved are mostly crimes they commit against each other. Some of these are petty crimes rooting from money, sources said.

In October 2016, 3 South Koreans were found dead in Bacolor City, Pampanga. Two of the suspects arrested were also Koreans. Investigation found that the case may be tied to a dispute with a South Korea-based businessman over money.

The case even prompted the South Korean government to send an investigative team to the country.

In 2016, 8 South Koreans were murdered in the country, including Jee. In 2015, there were 11 reported killings of South Koreans here. Police sources, however, claim that there is no trend that would be cause for alarm among the Korean community, saying that the murder-kidnapping case of Jee was an isolated case.

We asked the Angeles City Police for a data breakdown of crimes where Koreans are involved – how many crimes were committed against Koreans and how many were committed by Koreans – but City Director Senior Superintendent Sidney Villaflor never entertained our queries from January 21-24.

On January 25, Villaflor was sacked for “lack of supervision” over his men.

The dismissal stemmed from an incident on December 30, 2016, when 3 Korean tourists were arrested by 7 cops from Station 5 and detained for hours. The cops later asked the Koreans for P300,000. The 7 cops as well as their station commanders were earlier relieved of their duties.

The police officer who replaced the sacked Station 5 commander has also been accused of harrassing a Korean national. Senior Inspector Rolando Doroja faced a complaint in December 2015 for raiding without warrant an establishment owned by a Korean.

Doroja told Rappler that he was given permission by the Korean’s employee to inspect the premises, saying there was a legitimate tip that the establishment was being used for prostitution.

Lee said he believes Filipino criminals are targeting Koreans because “they think Koreans have a lot of money, and Koreans trust their Filipino friends very easily.”

“I don’t think Koreans are safe as long as many entertainments like casino, sex and golf still flourish in Angeles. I think (that these forms of entertainment expose) Koreans to extortion,” Lee said. Sources claimed there isn’t a clear-cut working relationship between the Korean desk officer and the local police, at least in Angeles.

Lee said he is merely a “liaison and observer regarding criminal cases involving Koreans.” But according to the source, the Korean police officer is doing more than just observe.

While admitting limited knowledge about the Korean police’s authority under the MOA, having been designated only in April 2016, Napolcom Vice Chairman Rogelio Casurao told Rappler it is still “basic principle that the Korean cops are still subject to the authority of their Philippine counterparts.”

“They’re still supposed to report to their (Filipino) bosses in the spirit of reciprocity,” Casurao told Rappler.

After the involvement of policemen in kidnapping, murder and extortion cases against Koreans, this working relationship is bound to get trickier.

For his part, asked if he still trusts the Philippine police, Lee said: “Half-half. Sometimes they do their jobs properly but sometimes they do bad things against Koreans. Very hard to say if I can trust them or not. We just cooperate with each other in some matters.”

Given the many dimensions of the matter of security for Koreans in Angeles,  Lee is asked if there’s reason to believe that another Korean may have had something to do with Jee’s murder.

He simply said: “As far as I know, there were no Koreans involved until now. But we are waiting for the result of investigation from the NBI and the PNP.” – Rappler.com