Tuguegarao mayor: How to face cases and stay in office Facebook Twitter Copy URL
Copied
Mayor Jefferson Soriano has faced 4 corruption charges and an electoral fraud case, but has been able to hold on to office for 4 years, with a re-election in between

He has, after all, faced 4 corruption charges and an electoral fraud case, yet he  had been able to hold on to his post for 4 years, with a re-election in between. This leave from the post, he clarified, would be temporary, just to “concentrate” on the legal battles. He had filed for a writ of injunction from the Court of Appeals, seeking to reverse the dismissal order.

How was he able to delay his dismissal? The answer lies in how our judicial system is set up.

Soriano was elected mayor of Tuguegarao City in May 2013, ending 25 years of rule of the Ting family by defeating re-electionist Delfin Ting. On July 31, 2013, the anti-graft court Sandiganbayan’s Fifth Division suspended Soriano over graft charges related to the anomalous purchase of helicopters by the Philippine National Police in 2009, when Soriano was the PNP’s deputy chief for operations. He was accused, among other things, of conspiring with former first gentleman Jose Miguel Arroyo to defraud the government.

This case is still on trial.

Curiously, the July 2013 suspension was served to the retired police general only the following year, in February 2014. The Department of the Interior and Local Government (DILG) said it was Cagayan Governor Alvaro Antonio who was tasked to implement the suspension order.

Antonio, who ran with the Tings in 2013, would eventually support Soriano in 2016, openly endorsing him during campaign rallies.

Antonio could not be reached for comment for this story, but Soriano had told Rappler that the delay in the implementation was due to the motions he filed.

In February 2014, Soriano received another suspension order from the anti-graft court, this time for graft charges over the PNP’s  anomalous purchase of rubber boats purchase in 2009. He is a co-accused in this case as the PNP’s former deputy director general.

This case is also still being heard.

On May 13, 2014, Soriano returned to office after serving his 90-day suspension over the PNP chopper deal case.

Three months later, on August 20, 2014, he was dismissed by the Office of the Ombudsman. He was found guilty of grave misconduct, an administrative offense, for closing streets during the local fiesta in 2013 and giving a special permit to a stalls operator without securing approval from the sangguniang bayan(city council). This case is known as the presyo agawid (flea market)case.

On September 11, 2014, Soriano vacated his office to serve his dismissal over the presyo agawid case.

However, a year later, on April 16, 2015, the Court of Appeals reinstated him when it reversed the Ombudsman’s decision, saying Soriano was only guilty of simple misconduct and not grave misconduct. The offense of simple misconduct requires only a 90-day suspension, not dismissal from office, court said.

At this point, Soriano still had not served his suspension over the PNP rubber boats case.

On July 30, 2015, Soriano filed a motion before the Sandiganbayan, appealing his suspension over the rubber boats case issued in 2014.

There was a 17-month gap from February 2014, when the suspension order was issued, and July 2015, when he filed the said motion. He was able to dodge the suspension order that long because court rules allow a defendant to file a motion for reconsideration within 15 days, a legal remedy that Soriano repeatedly availed of.

It took time for the anti-graft court to resolve these motions, but on November 2, 2015, the Sandiganbayan’s 3rd division affirmed its 90-day suspension order against Soriano. It said the rubber boats case is completely separate from the presyo agawid case.

However, because our judicial process allows him to appeal this, Soriano once again filed a motion, repeating his arguments.

On February 19, 2016 – two years since the Sandiganbayan first issued its suspension order – the court ruled that Soriano must serve the 90-day suspension over the rubber boats case.

Earlier in February 2017, he was again ordered dismissed by the Ombudsman for evicting bus, vans, and jeepney operators from a terminal space and giving a provisional permit to a terminal provider to use the same space, again without the required approval of the city council. This is known as the terminal case.

He complied with this dismissal order on Friday, February 10, but not without filing for a writ of injunction before the CA to reverse the order. He said he had also filed a motion for reconsideration before the Ombudsman, seeking to overturn the charges and be allowed to resume his term as mayor.

Soriano even said that the terminal case is “simpler” and easier to fight than the presyo agawid case. “I am more confident in this fight,” he told supporters when he said goodbye to them on the morning of February 10.

Soriano is also not ruling out a re-election bid in 2019. “That will be decided upon later on through the Almighty. I always take guidance from Him….Signs are given to us if we should continue. As of now, I would like to assure everybody that I will fight for our people,” he said, when asked about it. 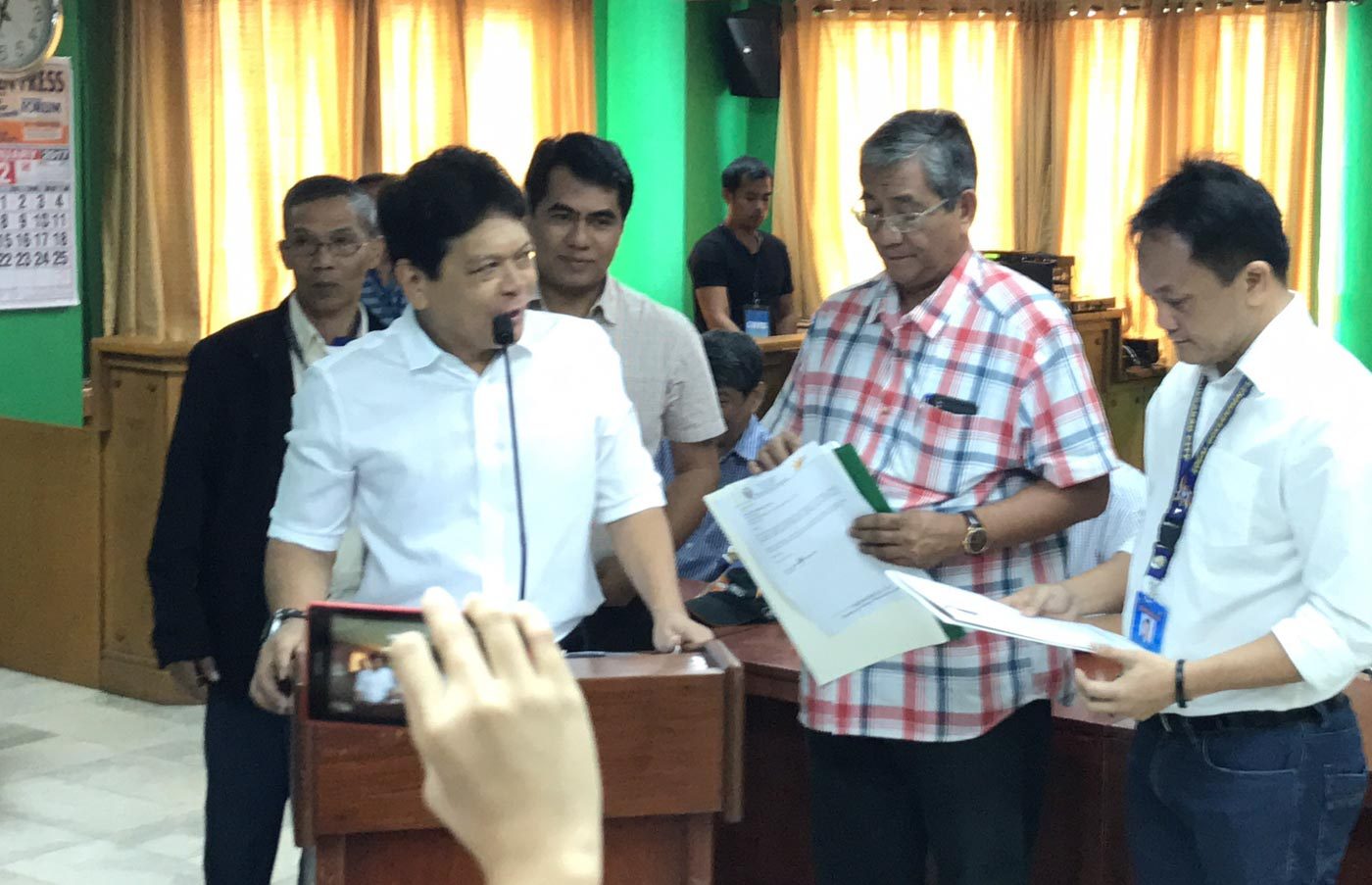 But Soriano is not just accused of corruption. Former mayor Delfin Ting, who lost to the retired cop in the 2013 elections, accused him of rigging the poll results that ended his family’s two-decade rule over the city.

Ting filed an electoral fraud case against Soriano before the Commission on Elections. On January 26, 2016, the Comelec ruled to nullify Soriano’s proclamation in 2013 due to irregularities. By then, Soriano was only 4 months away from the end of his contested term.

The Comelec found that there were signatures from the Election Day Computerized Voters’ List (EDCVL) that did not match those from the Voters’ Registration Record (VRR), and that the number of questionable signatures exceed the 1,205 lead of Soriano over Ting.

However, the Comelec said it could not recount the votes because key documents were missing. In July 2015, after the Comelec’s First Division ruled to proceed with the technical examination of the remaining ballots, the Comelec’s local office in Tuguegarao office was burglarized and the EDCVL of the 2013 elections went missing, and had not been recovered since.

Because of this, the Comelec said it could not proclaim Ting the winner, and just proceeded to appoint the elected vice mayor as the new local chief executive.

“To rule on either side at this point would prove futile in determining the true will of the electorate,” the Comelec said.

Soriano protested this, but the Comelec en banc ruled with finality last November 2016. Despite the 1st division’s ruling in January, Soriano was still able to run in May and defeated Delfin Ting again.

Why was his candidacy and eventual victory not affected by the electoral fraud case? First Division Commissioner Luie Guia explained that the electoral case was only principally concerned with determining who won. It means that the ruling just says there was cheating, but does not say who cheated.

In that case, Guia said, there is not “a final finding of election offense that will disqualify him from running.”

Election lawyer Emil Marañon III explained that the only way that Soriano could have been prevented from running in 2016 was if a disqualification case was filed against him. There was none.

Councilor Maila Ting-Que, Delfin Ting’s daughter and spokesperson, told Rappler: “I would like to think that during those times, we were just waiting for the en banc’s decision. Plus it just came out only a few weeks before the election, and we were busy already with the campaigns. And we did not want also to let them think that we’re just blocking him to run.” “Until he (Soriano) is proven guilty by the court, he cannot be stopped from running and holding office,” Marañon explained.

The Comelec has directed its law department to conduct a fact-finding investigation to determine “who might be responsible for the supposed irregularities.” A staff from the law department told Rappler their office only received the notice in the morning of February 10.

“I was told by the law department that they will process the case right away and order the conduct of fact-finding immediately,” Guia said.

System not set up to fight corruption?

Professor Roland Simbulan of the Center for People Empowerment in Governance said the slow judicial process has allowed public officials with corruption charges to still keep positions in the government.

“The slower it is, the more vulnerable it is to manipulation where the rich and powerful can get away with it,” Simbulan told Rappler.

He added that there should be reforms, whether in election law or local government law, which would prohibit officials with pending corruption charges from running for public office.

“Otherwise, if elected, he or she will just pull strings to influence the courts,” Simbulan said.

Soriano insists that the charges against him are all politically-motivated: the electoral case was filed by Delfin Ting; the presyo agawid case, by Maila Ting-Que, who is serving under Soriano as a councilor.

“I will fight them (political rivals) because I know they will not stop. I am fighting because we have our supporters and because I believe that there are still a lot people believing in our cause,” Soriano said.

“We are in politics. It will always be political. But people should look at the point of view; they should look at the legality of the case we are talking about. Go beyond that point,” Ting-Que said. “I hope the people will go beyond the personalities…families and biases and look at the issues being presented to them.” The fact that Soriano still enjoys significant support from his constituents is, according to Simbulan, a sign of Filipinos’ indifference to corruption.

“People have gotten used to to unexplained wealth of corrupt officials; they are more surprised with public officials with unexplained poverty who live simply,” he said.

He added: “Many officials think that if they are elected or re-elected by the people despite their misdeeds, it’s like being cleared and vindicated.”

As for Soriano, he sounds like he still has a lot of ammunition reserved in his battle to remain in power. “All legal battles must be taken at heart and must be fought very very properly,” he said. – Rappler.com