Feb 27, 2017 12:07 PM PHT
Camille Elemia
Facebook Twitter Copy URL
Copied
From June 30 to the days leading to her arrest, the senator personified both defiance and acceptance – defiance of the status quo and acceptance of her future 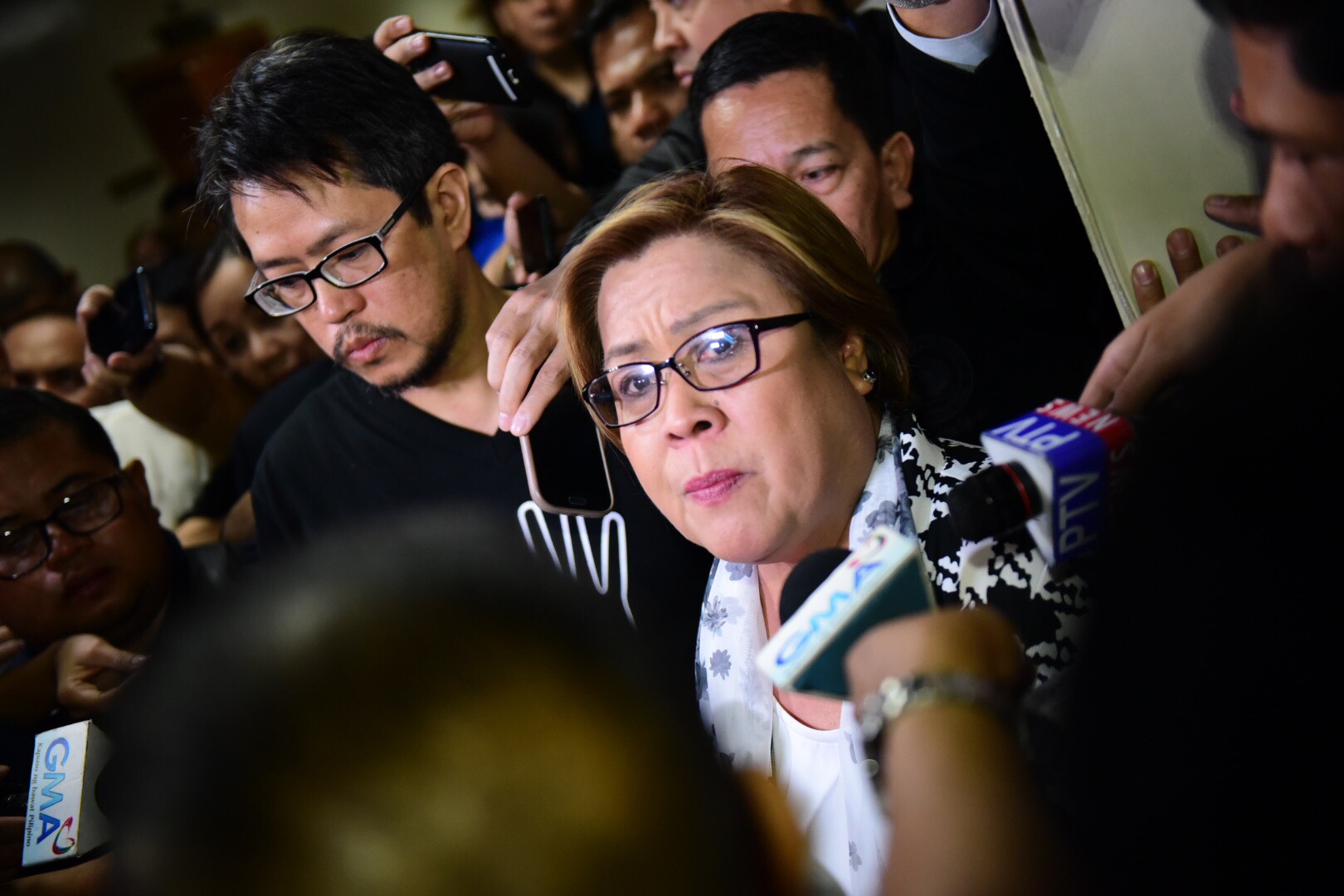 MANILA, Philippines – It was the day she had expected and the “vindication” her opponents had waited for.

With a marathon congressional hearing solely against her, the arrest order came as no surprise to De Lima and her allies. But when the day came, they were still caught flat-footed.

De Lima’s previous posts as Commission on Human Rights chair under the Arroyo administration and justice secretary under the Aquino government proved to be her vulnerability, as her actions at the time continued to haunt her all the way to the Senate.

For De Lima and her allies, it was clearly an act of political persecution against the senator, who first called out Duterte’s alleged involvement in the Davao Death Squad in 2009.

But it was a welcome development for those who call themselves “victims” of De Lima, the foot soldier of then president Benigno Aquino III.

De Lima maintained the Sandiganbayan, not the regular courts, have jurisdiction over the alleged violations she committed as a public official and as justice secretary.

It didn’t help De Lima that just weeks and months after Duterte’s victory, many politicians expectedly jumped ship and moved to the President’s side.

This included former president Gloria Macapagal-Arroyo, who was the first high-profile prisoner under the Aquino administration. De Lima stood out as the lone voice in a sea of silence. Her close association with Aquino and the then powerful Liberal Party hurt her as much as it helped propel her to power.

It was De Lima in November 2011 who blocked Arroyo’s departure from the Philippines despite a temporary restraining order from the Supreme Court (SC) then filled with Arroyo appointees. It pitted Aquino against the SC early in his term.

As with De Lima, despite being a public official at the time the alleged violation was committed, the case against Arroyo was filed at the Pasay Regional Trial Court Branch 112.

The court then immediately issued a warrant of arrest against Arroyo, who was detained at St Lukes Hospital due to a lingering back illness.

Back then, the justice secretary maintained there was nothing “unusual” and out of the ordinary when a court issues an arrest warrant immediately – a statement that would haunt her nearly 6 years after.

“Hindi po yan unusual in fact, well as I know it, as a previous practitioner, ang general rule is that nakakakuha talaga ng warrant of arrest kaagad din after the filing of information. Nothing unusual, extraordinary if on the same day that a criminal information is filed, ay nagi-issue rin agad ang judge ng warrant of arrest,” she said in a Malacañang press briefing in 2011.

With De Lima’s case, the 3 drug charges filed against her were raffled on February 20. Three days after, the court issued an arrest warrant.

As early as August 2016, when De Lima became the target of Duterte, former first gentleman Mike Arroyo insinuated that De Lima got a taste of her own medicine. (READ: Mike Arroyo to De Lima: How does karma feel?)

“Senator de Lima complained that what President Duterte did to her was ‘very foul.’ How about when you violated [Arroyo’s] human rights by not allowing her to leave? You willfully disobeyed the SC TRO. Wasn’t that ‘very foul’ also?” the former first gentleman wrote on Facebook. The post has since been deleted or made private.

If Janet Lim-Napoles is the alleged mastermind of the Priority Development Assistance Fund or pork barrel, De Lima could be considered the head hunter of politicians who supposedly misused their PDAF.

She led the filing of charges against senators, congressmen, and even local officials – an act that would not be forgotten by these politicians years later.

De Lima was pivotal in the imprisonment of former senators Juan Ponce Enrile, Jinggoy Estrada, and Bong Revilla. Enrile was released on bail for “humanitarian” reasons, while Estrada and Revilla are still jailed in the Philippine National Police Custodial Center, where De Lima is detained.

Ironic as it may be, De Lima was earlier told to choose between the former detention cells of Enrile or communist leaders Benito and Wilma Tiamzon. Both Enrile and the Tiamzons were arrested and imprisoned under Aquino, when De Lima was justice secretary.

Estrada and Revilla, in their Facebook accounts, turned the table against De Lima, saying she now knows what their family went through before. (READ: Pork barrel ‘queen’ parties with solons)

In August 2016, Enrile’s daughter Katrina Ponce-Enrile also hit back at the senator for “shaming” her father.

But unlike the convicts’ testimonies that were used as basis for the drug charges against the senator, the DOJ then was able to submit evidence such as bank documents, Statements of Assets, Liabilities and Networth (SALN), Commission on Audit reports, and endorsements of non-governmental organizations allegedly linked to Napoles.

The Aquino government, however, was accused of being selective and of railroading the plunder charges against the 3 senators not allied with the Liberal Party. The popular actors Revilla and Estrada, at the time, had expressed interest in running for higher office.

De Lima’s probe into politicians’ pork barrel also distanced her distant from some colleagues in the Senate. Some of the senators she implicated in the controversy are Senators Gregorio Honasan and Joel Villanueva. She also investigated Senator Nancy Binay’s father, former vice president Jejomar Binay, over corruption allegations.

Aside from LP members and Senator Antonio Trillanes IV, another strong critic of Duterte, De Lima has no other formidable ally in the 24-person chamber.

This was evident when she was ousted, with a vote of 16-4, as chairperson of the Senate justice committee at the height of investigations into allegations that Duterte ordered killings in Davao City. (READ: Personal grudge in De Lima ouster? Senators deny it)

But for De Lima, her arrest is not a case of “karma:” Why would it be called such when the Aquino administration “never engaged” in acts of persecution, she said.

“I really don’t know what they mean. If what they are saying is that well, I because I have sent to jail some high profile personalities in my capacity as Secretary of Justice, for example, the former president Gloria Macapagal Arroyo, but I was just doing my job and the cases we filed were on the basis of the findings that there are enough evidence,” De Lima said in an interview before her detention.

But for the 3 senators and other critics, this was farthest from the truth.

From defiance to acceptance

From June 30, when Duterte took office, to the days leading to her arrest, De Lima was the personification of both defiance and acceptance – defiance of the status quo and acceptance of her fate.

She has known for a fact that numerous people have an axe to grind against her, prompting her and her allies to fear for her safety in detention. (READ: De Lima to bring won food, water to Crame jail)

Duterte immediately hit back, publicizing the senator’s “immoral” love affair with her former driver and bodyguard. He also first floated the accusation that De Lima had a hand in the proliferation of illegal drugs in the national penitentiary.

It was the first time the feisty senator was teary-eyed in public, caught off-guard by the President’s scathing personal remarks.

But De Lima, a high-profile lawyer before entering politics, stopped at nothing to “unmask” and attack Duterte.

Despite continuous tirades, De Lima brought out the first witness against Duterte – self-confessed assassin Edgar Matobato – who claimed to be part of the so-called DDS.

What followed was a series of charges against her, seemingly covering all bases – numerous Senate ethics complaints, marathon House inquiries where her personal life was made public and where convicts were used to testify against her, Ombudsman complaints, and drug trafficking charges.

Midway through the ordeal, De Lima would show passion and anger in press conferences now and then – which her critics used against her. At one point, following criticisms on social media, she apologized for her “outburst” prompted by a Senate probe.

But a few weeks before her arrest, De Lima appeared to have psychologically prepared not just herself, but her staff and family too.

She said she did not want to leave her family clueless and unprepared for the resulting situation.

De Lima told her staff not to cry or, if and when they did, to hide it from her, and proceeded to give other instructions.

At one time, when women supporters visited her office on February 14 and told her they would join her in prison, De Lima even joked: “‘Wag ‘nyo naman akong samahan sa loob ng kulungan, sa presinto na lang po.” (Don’t accompany me inside jail, just inside the precinct.)

The senator has also been active in Senate hearings and debates – even until the last hours before the arrest warrant against her was issued.

Perhaps a sign of her impending arrest, two of her former and present critics were kind to her on her last working day, Thursday, February 23, during the Senate hearing on the death of Korean businessman Jee Ick Joo.

Senator Panfilo Lacson, whom De Lima hunted down in 2011, lauded De Lima’s questions and said in jest: “Don’t get jailed. We will miss you,” prompting laughter from the lady senator.

In an unusual break from their word war, Justice Secretary Vitaliano Aguirre II, who led the filing of charges against her, agreed with De Lima’s views at least twice that day.

In De Lima’s words, she was “ready” for her fate, citing the President’s words that he would make sure De Lima is jailed. The senator even had a pre-recorded video statement on her arrest.

Even in her last interview with the media before she went out of the Senate to go to Camp Crame, De Lima stood defiant against Duterte, insisting her fight is not yet over.

She made sure this was known during her first 24 hours in jail, as she released a strongly worded statement on the 31st anniversary of the 1986 EDSA People Power revolution.

De Lima also granted an interview to TIME magazine – consistent with her previous actions seeking to drum up international support for her and propel scrutiny of the administration.

On Monday, February 27, she sought the Supreme Court’s help to immediately stop her “illegal” arrest, citing the judge’s lack of jurisdication and grave abuse of discretion. The feisty senator, it appears, is not giving up. – Rappler.com