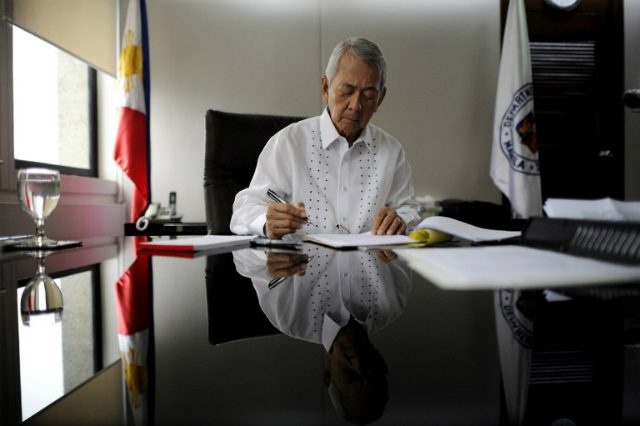 Facebook Twitter Copy URL
Copied
'I am so sad that he could lie under oath before the members of the Commission on Appointments,' Representative Josephine Ramirez Sato tells Rappler

MANILA, Philippines – Foreign Secretary Perfecto Yasay Jr could be liable for perjury after he told the Commission on Appointments (CA), under oath in a public hearing, that he never became a US citizen despite evidence showing otherwise.

“That could be a cause for a complaint for perjury,” CA foreign affairs committee chairman Senator Panfilo Lacson said on Monday, February 27.

Yasay, a lawyer, could be held accountable for the same crime after he stated before the Commission on Elections (Comelec), also under oath in November 2009, that he was not a foreigner. He was then running for vice president in the May 2010 polls.

His possible liability comes after evidence surfaced that Yasay became a US citizen on November 26, 1986, and renounced it only June 28, 2016, almost 3 decades later. (READ: TIMELINE: When Foreign Secretary Yasay was a foreigner)

Rappler learned that Yasay himself provided a CA member with a Certificate of Loss of Nationality of the United States, showing that he renounced his US citizenship June last year.

This was contrary to his repeated claim in a CA hearing on February 22, 2017 which he made under pain of perjury, that he “never legally acquired US citizenship.”

The CA member who received the document, Occidental Mindoro Representative Josephine Ramirez Sato, added that Yasay gave her an affidavit which said that he “was granted United States citizenship” on November 26, 1986.

In the same affidavit, however, Yasay said that he was “ineligible and disqualified for such citizenship” because he “did not intend to reside in the US.” He also said he abandoned his US residency a year after he became a US citizen.

He executed this affidavit on February 23, 1993, a month before he became associate commissioner of the Securities and Exchange Commission. Philippine law bars foreigners from taking government posts.

The 1993 affidavit came after nearly 7 years of enjoying US citizenship.

Oath of allegiance to the US

Sato pointed out that the February 1993 affidavit “came after he [was] granted American citizenship, and so this affidavit is evidence that he was, as early as November 26, 1986, a citizen of the United States of America.”

During the CA hearing last February 22, Yasay also claimed that he “did not abandon” his Philippine citizenship, but admitted upon questioning, that he took an oath of allegiance to the US.

The oath of allegiance to the US states: “I absolutely and entirely renounce and abjure all allegiance and fidelity to any foreign prince, potentate, state, or sovereignty, of whom or which I have heretofore been a subject or citizen.”

This means he had to first abandon his Philippine citizenship before becoming a US citizen.

Sato said she was “so surprised” after opening the envelope of documents that Yasay gave her on February 22, “right after the suspension of the hearing on his confirmation.”

“I am so sad that he could lie under oath before the members of the Commission on Appointments,” Sato told Rappler on Monday.

Lacson said that possible rejection as foreign secretary “should be the least” of Yasay’s worries, as he could be liable for perjury.

(If there is perjury, there is a criminal offense. So he shouldn’t worry too much if he isn’t confirmed. His bigger problem is the case he will possibly face.)

The Revised Penal Code penalizes any person “who, knowingly making untruthful statements…shall testify under oath, or make an affidavit, upon any material matter before a competent person authorized to administer an oath in cases in which the law so requires.”

The penalty for perjury is imprisonment of up to two years.

No ‘personal knowledge’ about passport

Referring to Yasay, Senator Francis Pangilinan also said in a text message, “He will have a lot of explaining to do to convince the CA, and if he fails to satisfy the CA with convincing proof that he did not lie, then I am afraid his appointment will face rejection.”

The other question is if Yasay reacquired his Philippine citizenship after he renounced his being American. “Did he reacquire it? I do not know because nothing is in the record,” Senator Franklin Drilon said.

The CA grilled Yasay about his citizenship after Rappler, on January 10 and February 10, published stories about Yasay’s US citizenship.

Rappler learned from 4 independent sources, including two from the US government, that Yasay was a former US citizen. He was also found to have owned a US passport with No. 121190223, which he supposedly used in travels from 2007 to 2009.

Later, the US government itself listed Yasay among American citizens “who lost citizenship.”

Still, an irate Yasay told Rappler on November 29, 2016, “I am a Filipino, I have always been a Filipino, and I have never been a US citizen. I continue to be a Filipino, so that’s the end of the story.”

On his passport number, Yasay did not flatly deny Rappler’s report as a lie when he appeared before the CA.

“All I’m say–, what I’m saying is that I do not have any information about that passport at all,” Yasay said. He later clarified that he “never held any American passport” based on his “personal knowledge”.

This is not the first time Yasay claimed to be a non-American.

In November 2009, Yasay swore he was not a foreigner when he filed a certificate of candidacy (COC) for vice president, as running mate of then presidential bet Brother Eduardo “Eddie” Villanueva.

Yasay stated in his COC, among other things, “I am not a permanent resident of, or immigrant to, a foreign country.”

He then signed a certification “that the facts stated herein are true and correct of my personal knowledge,” and took an oath before notary public Sherwin Tugna on November 24, 2009.

Yasay also ran for senator in the May 2001 elections, where one of the requirements, as in all elections, was to be a Filipino.

Comelec Chairman Andres Bautista told Rappler that if Yasay was a US citizen back then, and he made his COC declaration under oath, the Philippines’ top diplomat may be liable for perjury.

“Under oath ‘yang COC e (The COC is under oath),” Brillantes said.

Brillantes, however, said Yasay can get off the hook if he proves that he made the wrong statement in good faith.

“Para maipakulong mo, dapat sinadya niya,” the former Comelec chairman said. (To have him jailed, he should have done it deliberately.)

In any case, if Yasay lied about his citizenship, this is a point against him before the CA, which is tasked to examine not only the competence of Cabinet members, but also their integrity. – Rappler.com

Editor’s Note: An earlier version of this story said Rappler asked Yasay about his citizenship on November 28, 2016. We regret this error. We have corrected this to say we interviewed him on November 29, 2016.