Is it time for a national minimum wage? MANILA, Philippines – Setting a standardized minimum wage for the entire country has been the clamor of labor unions for years.

They found a champion in President Rodrigo Duterte as he appeared keen on having a national minimum wage, instead of the current regional setup, to spread wealth and development in the Philippines.

Based on Republic Act (RA) 6727 or the Wage Rationalization Act, each region in the Philippines has a unique minimum wage set by the Regional Tripartite Wages and Productivity Boards (RTWPBs) based on the poverty threshold, employment rate, and cost of living specific to the region.

Department of Labor and Employment (DOLE) Secretary Silvestre Bello III said in September last year that the President wants equal pay for workers in Metro Manila and in the provinces.

He noted then that this could help decongest the country’s overpopulated capital, which is often the top choice of workers due to higher wages.

Labor groups strongly support this pronouncement, arguing that there is a significant disparity in wages across regions while the difference in the cost of living is minimal.

How has the government acted on the promise of instituting a national minimum wage? Would it be feasible for a country still eyeing job generation through investments?

Union leaders have criticized RTWPBs for being unresponsive to the increasing needs of their sector. They stressed that the current minimum wage is not sufficient for both food and non-food needs of families.

The Philippine Statistics Authority said a family of 5 needs at least P9,064 monthly or around P390 daily to meet their needs. Independent think tank IBON Foundation, meanwhile, pegged the living wage at P1,019 per day. 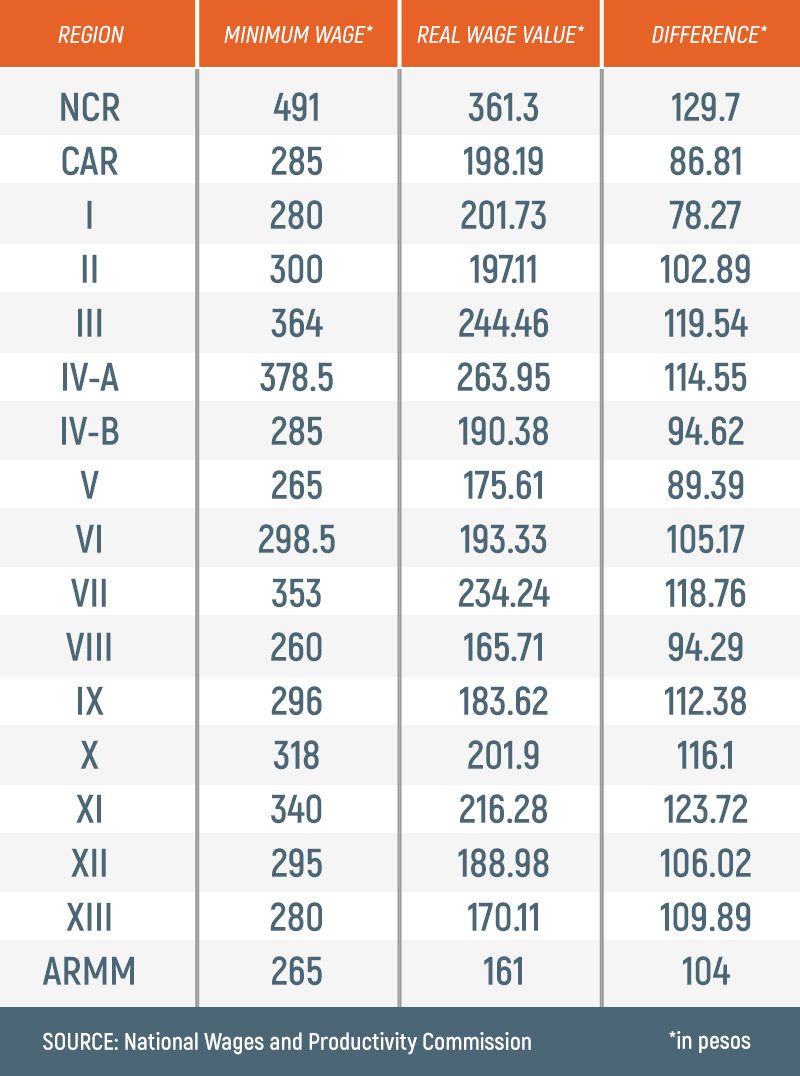 Nagkaisa labor coalition spokesperson Allan Tanjusay said RTWPBs have not been very proactive in adjusting the wage levels to inflation, or the increase in the price of goods and services.

“It should be an automatic response from the [RTWPBs] to adjust the salaries, whether or not there is a petition from the laborers. Even though it has just been a year since the last wage increase, they should be quick to implement the adjustment. But what is happening now is that we still need to file a petition and talk to the President himself to effect changes,” said Tanjusay in Filipino.

Nagkaisa is currently seeking a P157 wage hike in Metro Manila and a P500 government subsidy for minimum wage earners, along with the campaign for a national minimum wage.

KMU chairperson Roger Solita said the regional setup prevents workers from establishing a strong front on wage setting, given not all regions have labor unions to petition for higher wages.

(Because of the Wage Rationalization Act, workers aren’t united because they have different levels of wages. There is no unified position.)

Minimum wage for provinces with costs of living close to Metro Manila also have a lower wage rate because the factors are considered regionally.

For instance, the P454-P491 minimum wage in Metro Manila is much higher compared to the P285-P378 minimum wage in Southern Tagalog, where provinces such as Cavite and Laguna – considered part of the Greater Manila Area – are located.

Because these urbanized provinces are clustered with more rural provinces like Quezon and Batangas, their wages are dependent on the average labor conditions in the region.

Amending the structure of wage setting in the country is within the powers of Congress, since it involves a review of RA 6727.

To date, no bill has been filed in the Senate or in the House of Representatives proposing a national minimum wage.

But during the labor sector’s dialogue with Duterte last February 27, the President committed to start reviewing an alternative wage-setting mechanism.

Undersecretary Bernard Olalia of the DOLE Human Capital Development and Regional Operations cluster said the department has yet to create a proposal following Duterte’s pronouncement.

“I think the President will address that particular issue. The recommendation of our department is to create a committee composed of all social stakeholders and government agencies to review the existing law and study a proposal for a national minimum wage,” he told Rappler in an interview. But Olalia said this proposal, which effectively raises the minimum wage in the provinces, may hurt the entry of investors there.

“Industries tend to go where there is cheaper labor. If there is a standard minimum wage in the entire Philippines [investors] won’t be able to choose where to go. But if the minimum wage is less in, for example, [Southern Tagalog], and down south in Mindanao, industries would go there,” he explained in Filipino.

“In a way, if you distribute it in the entire Philippines, there will be job generation in every region. That’s the main advantage of the regional wage setting,” he added.

This scheme also protects micro, small, and medium enterprises (MSMEs), which comprise 99.5% of business enterprises. Data from the Department of Trade and Industry show that 896,839 of 900,914 registered businesses are MSMEs.

“If they cannot afford it, they will first hide so they will not be inspected. Then they become informal. Once they are informal, we cannot protect [the workers],” explained Lagunzad, who is now serving as Bello’s undersecretary for social protection.

“The labor market is composed of the demanders and suppliers of labor. Demanders will pay those wages. If they cannot create value more than the wage, then there’s no business to talk about,” he added.

For Olalia, the middle ground would involve strengthening profit-sharing schemes in order to provide additional pay to workers based on their performance, something the NWPC is also implementing.

The proposal for a national minimum wage is among the topics expected in Duterte’s second dialogue with the sector in Davao City on May 1, International Labor Day.

While DOLE said it will be difficult to implement proposals related to wages, Duterte supposedly has a “surprise” in store that would provide additional benefits.