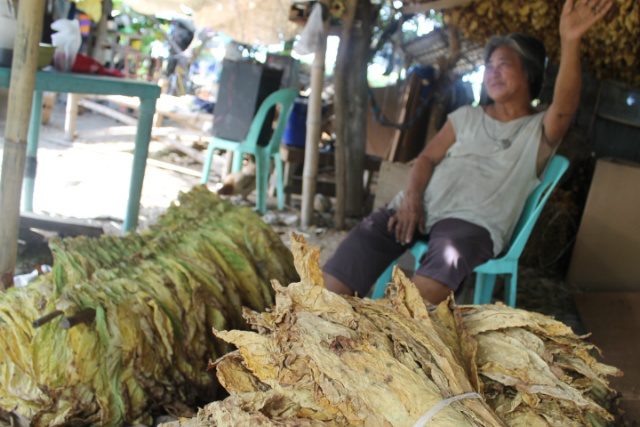 Her routine begins every October, the start of the tobacco planting season: Constancia wakes up at 5 am to cook the day’s meals. As soon as the sun illuminates the provincial roads of Barangay Gabor Norte in Sta Cruz, Ilocos Sur, she heads out to their rented farmland to begin the day’s work.

With a water pump in tow, Constancia spends the rest of the day watering tobacco plants, only taking a quick break in between to eat. She ends work before the sun sets, ready to repeat everything again the next day and every day until it’s harvest time.

Like many tobacco farmers, Constancia and Romeo have a production contract with a tobacco firm – in their case, Philip Morris Philippines Manufacturing Incorporated and Fortune Tobacco Corporation (PMFTC) – that finances their livelihood.

For the current planting season alone, the couple had to borrow P50,000 to rent an almost one-hectare farmland and to purchase tobacco farming inputs. Constancia said they also borrowed more or less the same amount in the previous year.

Asked about the financial return from tobacco farming, she could not give an exact amount of how much they earned in 2016. But she said they earned enough to pay their debt and still have about P10,000 left, which they then used to buy farming inputs needed to plant rice in July.

Romeo admitted that what they earn from tobacco farming is “pantawid buhay lang (enough just to get by).” Still, they stay as tobacco farmers because, according to them, they don’t know any other way to earn a living.

(With tobacco, even if you don’t have money, someone will finance you – for example, Philip [Morris]. They’ll give you everything, your daily needs, until you harvest. They even pay you after harvest.)

Assistance from their local government unit (LGU), meanwhile, still leaves much to be desired.

The couple knows Sta Cruz is getting millions from tobacco funds, but they say the LGU has yet to provide them with their most basic needs: farming equipment.

Ilocos Sur, which according to the National Tobacco Administration is the province where a huge percentage of Virginia tobacco is grown, received in 2016 a total of P6.08 billion from Republic Act (RA) 7171.

This 1992 law ensures that Virginia tobacco-producing provinces such as Ilocos Sur will benefit from 15% of collections from excise taxes on locally manufactured Virginia type of cigarettes.

Under the same 2016 release by the Department of Budget and Management (DBM), the municipality of Sta Cruz which ranked 4th in the province in terms of volume of production received a total of P264 million.

The 2016 releases to Ilocos Sur and Sta Cruz come from the collection of excise taxes in 2013, but the funds were charged against the 2015 General Appropriations Act.

What the municipality received in 2016 is much bigger than the P65 million it received in 2015, but the significant increase can be attributed to the Supreme Court’s 2013 decision declaring the Priority Development Assistance Fund as unconstitutional.

The release of the share for congressional districts required legislative consultation, but the SC decision no longer allows “any form of post-enactment intervention by legislators.” (Everything now goes to municipal share, but of course in the implementation and selection of projects, we have to get the opinion of our congressmen, because they have helped us in one way or another.)

Rappler obtained a copy of a March 31 report detailing Sta Cruz’s fund utilization of its share from RA 7171, as well as the status of the implementation of projects covered by the law.

Listed in the report are completed or ongoing infrastructure projects that ranged from the construction of multi-purpose buildings, bridges, flue curing barns, and river and flood controls, to the improvement of several farm-to-market roads.

Many of these projects, while they support tobacco farmers, also support farmers of other crops in the municipality.

Josue said it is the municipal development council that determines what projects to fund using RA 7171, since it includes representatives from farmer groups, professionals, and other sectors in the community.

Aside from infrastructure projects, Sta Cruz also uses RA 7171 to provide farmers with necessary equipment, such as kuligligs – a motor vehicle pulled by a two-wheel tractor – water pumps, and hoses.

Josue said some tobacco farmers like Constancia and Romeo have yet to receive the free farming equipment because the municipal government had just started giving them out last year.

(That’s just the first tranche. Since we have 49 barangays and we have more than 4,000 registered farmers, the mayor wants to make sure all of them will be given water pumps and hose)

In Pidpid, another barangay in Sta Cruz, farmers complain about deep wells provided by the municipal government that are not yet functional.

(The deep wells are not yet being used because they have not yet installed the pump there. The deep wells have been there since last year, we have 5 here in the barangay, but only two are functional while the 3 are not. We already reported that the deep well is not providing water.)

Another tobacco farmer in Pidpid, 54-year-old Rogelio Suyom, suggested it would be good if farmers can also get cash from RA 7171.

(We all know that there won’t be 7171 without the farmers. That would be good, if something goes directly to the farmers…. I prefer that they provide us cash, even if they have to base it on the percentage of the kilos I’ve produced, so that we have incentives both from the company and from RA 7171.)

But the problem with this suggestion, according to Josue, is that some farmers would use the money elsewhere instead of using it on tobacco farming.

What the municipal government did instead is give the cash to farmer cooperatives.

“Lahat ng tulong na p’wedeng maibigay sa kanila, ibibigay. Ngayon, through the cooperatives, doon sila ngayon manghihiram ng puhunan nila (All the support we can give will be given to them. Now, they can borrow their investment from the cooperatives),” she added. The country now has a unitary tax rate of P30 on all cigarette packs regardless of price, thanks to the sin tax law.

But before 2016 ended, the House of Representatives passed a bill seeking to impose a two-tier excise tax structure on cigarettes.

But as far as Josue knows, tobacco farmers on the ground are not worried about the current sin tax law, or any increase on tobacco taxes.

If anything, she sees higher taxes on cigarette to mean Sta Cruz will get a bigger allocation from RA 7171.

Since the LGU share from RA 7171 is based on the volume of Virginia tobacco production, Sta Cruz is closely monitoring its tobacco production to make sure every kilo of tobacco leaf grown by their farmers is accounted for.

(The mayor really wants us to monitor the production. Some middlemen here don’t come from Sta Cruz. They buy leaves here and bring them to La Union, that’s why we have to monitor, so that it can be put on the record that the tobacco they bought is from Sta Cruz, not La Union.)

(If not, if you’re not alert, and if you don’t monitor, you will lose. Because almost every province now really wants to have a share from RA 7171.)

(To be concluded.) – Rappler.com

This story was produced under the “Mga Nagbababang Kuwento: Reporting on Tobacco and Sin Tax Media Training and Fellowship Program” of the Probe Media Foundation with the support of the Campaign for Tobacco Free Kids.