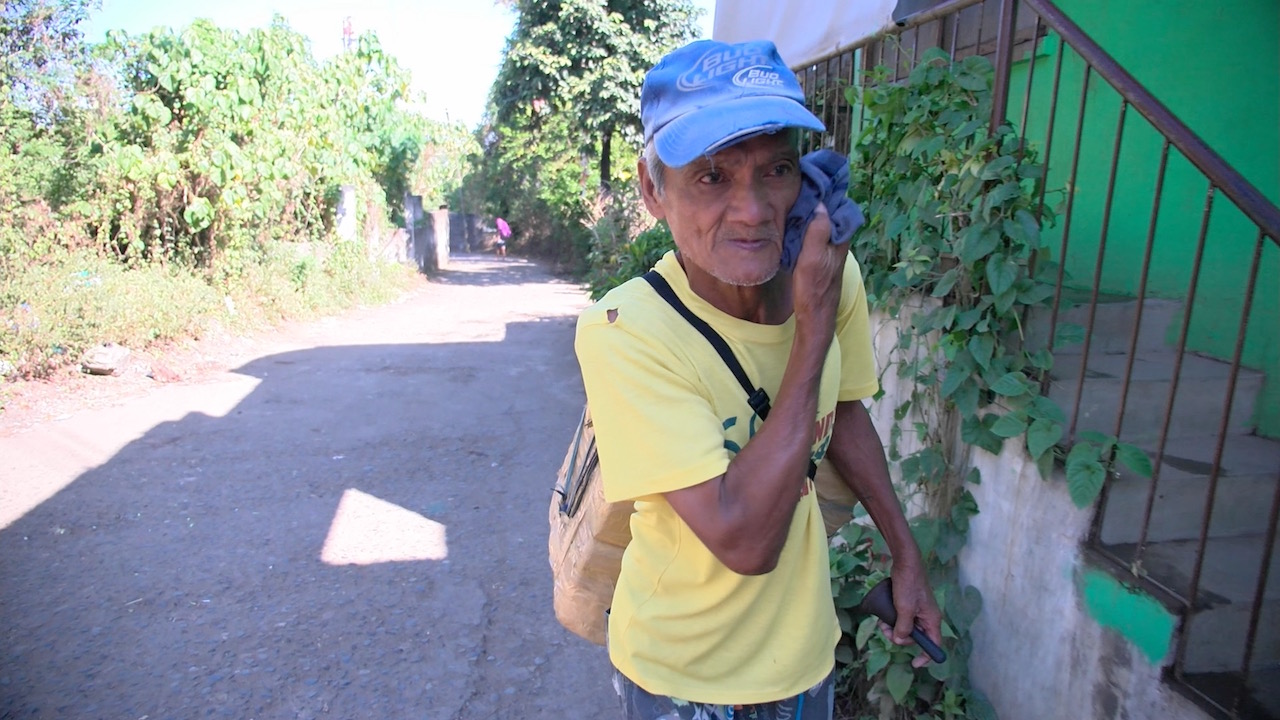 MANILA, Philippines – At age 72, Arturo Fabular, walks the stretch of Caloocan City to the nearby city of Meycauayan in Bulacan but not as exercise for his personal well-being.

Every day, he carries with him a box containing around 100 pieces of ice drop candy, as he spends hours traversing the streets of the cities, under the heat of the sun, to sell these cold treats.

It’s already a 12-kilometer stretch to and from his home in Caloocan but Arturo spends the whole day walking just to earn money.

He gets the ice drops for P7 apiece and sells each for P10. On a good day, he brings home P300 after around 10 hours of work and after paying his supplier. When the ice drops start to melt, he chooses to give them away to kids for a free afternoon treat.

Like anyone his age, Arturo would prefer spending the rest of his life in the comforts of their home.

But he knows he’s not privileged to do so because he still needs to earn money for his and his wife’s needs. Both of them are aging and will need care with the passage of time.

Working as an ambulant vendor remains his only choice. Since he resigned from a factory back in the 1970s, Arturo has been in between jobs mostly in construction and selling ice cream on the streets.

He failed to sustain payments for his monthly premium as a member of the Social Security System (SSS) after leaving the factory. He had to prioritize food and other household needs, he said. (READ: Duterte approves P1,000-SSS pension hike this year)

(For me, I’m getting tired. But I can’t do anything about it. I’m obliged to work for my family. My daughter and her husband have work but I don’t want to depend on that because it’s not enough for them too.)

Pension for the indigents

The Department of Social Welfare and Development (DSWD) has a Social Pension Program for Indigent Senior Citizens (SPISC) that gives P1,500 to poor senior citizens every quarter (P500 monthly).

Indigent senior citizens are those who are frail, sickly or with disability; do not receive pension from state-run pension agencies; and do not have a permanent source of income or financial support from family or relatives.

There are currently more than 1.3 million elderlies who are enrolled in the program. For 2017, the government has targeted to double the coverage to 2.8 million with a funding of P17.94 billion from last year’s P8.711 billion.

DSWD Undersecretary Hope Hervilla explained that funding increased from P1 billion since it started in 2011 to P17.9 billion this year because the number of senior citizens increases each year.

Out of the 8 million senior population based on DSWD’s estimates, only 35% are covered by the program. “The 35% are those we identified already as the poorest of the poor,” she said.

The program has definitely bridged a gap in the social protection system in the country but it too has its lapses. A number one concern would be the pension amount amid the increasing prices of goods. 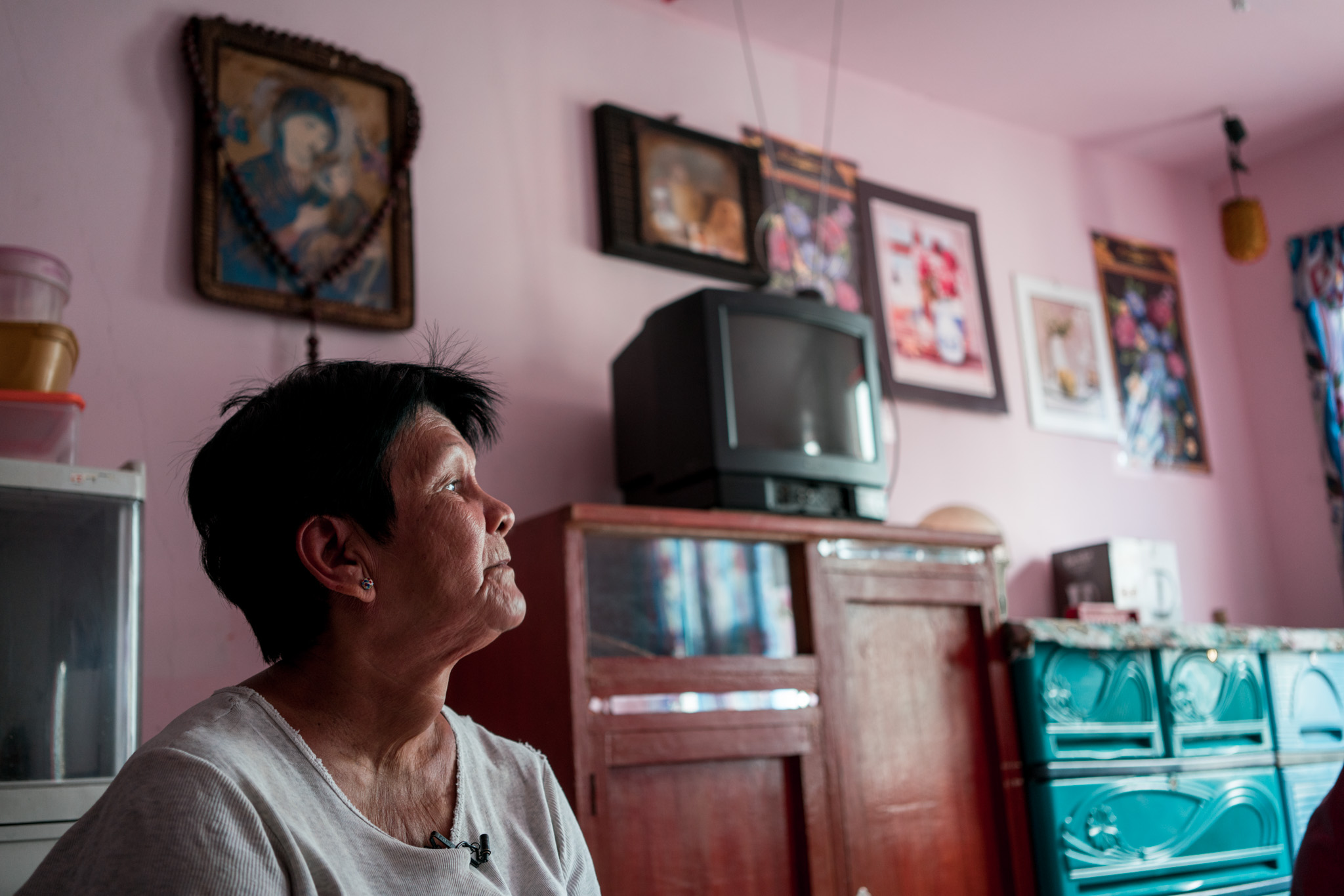 The Fabular couple is receiving pension from the program, but only Adelina is enlisted because according to the local government, only one of them can avail of it – despite it being available for each senior citizen.

Although helpful, for Adelina, the P500 monthly government pension hardly suffices for the things they really need, such as proper medication and nutrition. Adelina has had goiter for decades but it has never been treated. Arturo is having major body pains that prevent him from moving and working.

Hervilla said they are proposing an increase in pension for next year’s budget but it will all depend on the approval by the budget department and the House of Representatives.

For the Coalition for the Services of the Elderly (COSE), the classification of beneficiaries is so subjective it might exclude others in need.

“The definition for indigent is very subjective like frail, sickly, no source of income or no support from relatives or families. If we based solely on that, there will be different interpretations in each local government unit so there is a problem with the implementation,” explained COSE Executive Director Emily Beridico.

COSE, the Confederation of Older Persons Associations of the Philippines (COPAP), and other civil society organizations are pushing for the establishment of a universal social pension in the Philippines. The proposal is supported by House Bill 5038 which seeks to grant universal social pension to senior citizens. It was filed by Ako Bicol Representative Rodel Batocabe.

Its end goal is to cover those who are not part of the SSS and the Government Service Insurance System and the SPISC, particularly those working in the informal sector. The Philippine Statistics Authority estimates that 38% of the labor force are in the informal economy with odd and irregular jobs. (FAST FACTS: What you need to know about PH’s informal sector workers)

“There is a huge incidence of work informality in the Philippines so workers really can’t save for their pension. Another problem is the employers trying to evade the responsibility of paying for the premiums. There is also poverty that the Filipino workers will prioritize over pension,” said Beridico in a mix of Filipino and English. 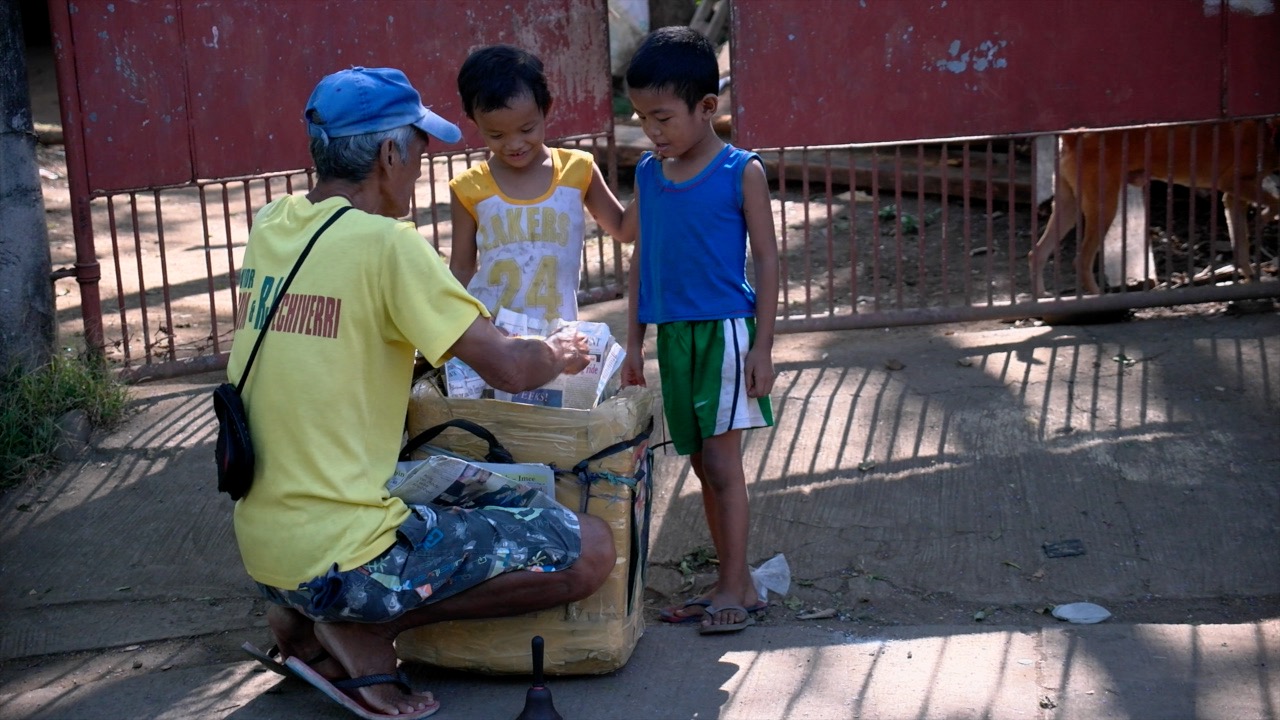 A study conducted by COSE with HelpAge International found that providing pension for all could uplift around 3 million Filipinos from poverty.

It did a simulation using the Annual Poverty Indicators Survey released in 2013 and showed that poverty rates would drop from 25.4% to 22.3% if a P2,000 social pension is provided to all Filipinos.

“Pension reduces the need for children and other family members to provide financial support to older family members. This helps families reallocate expenditure toward other priorities such as children’s education or initiatives to improve livelihoods,” the study said.

Countries that have implemented a pension-for-all policy have also seen improvements in poverty statistics. The study cited another research noting the 69% decrease in child poverty in Georgia due to a universal pension established in 2006.

Another case the study cited was in South Africa where girls in households with a senior benefiting from social pension were found to be 3 to 5 cm taller than in other households because of better nutrition. Child labor in Bolivia also went down by half in houses where elders receive pension from government.

Fellow member-countries of the Philippines in the Association of Southeast Asian Nations – Thailand, Vietnam and Brunei Darussalam – have their own versions of the universal social pension system.

The study emphasized that other poor countries are reaching close to 100%-coverage for elderly pension. 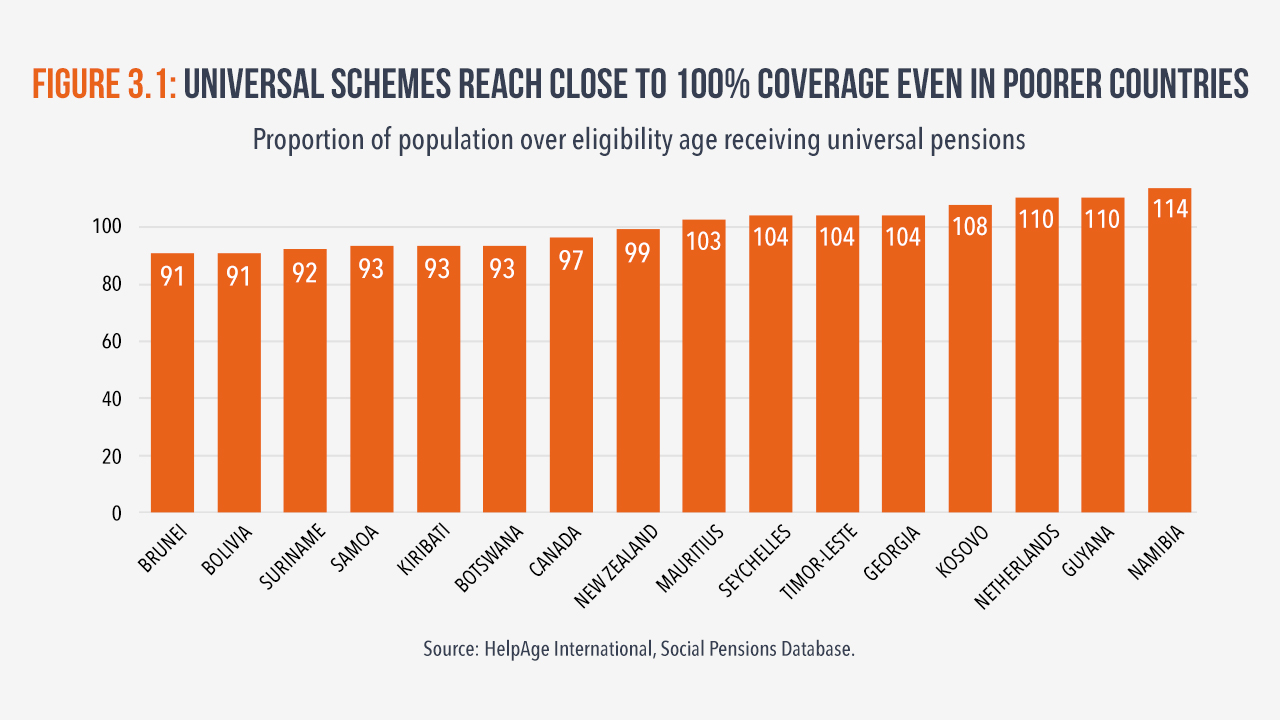 Kiribati and Timor-Leste, whose GDP per capita rates are just half of the Philippines’, have already provided a social pension for all their seniors.

GDP per capita or a country’s total output divided by the number of people is a measure of economic performance and a poverty indicator. 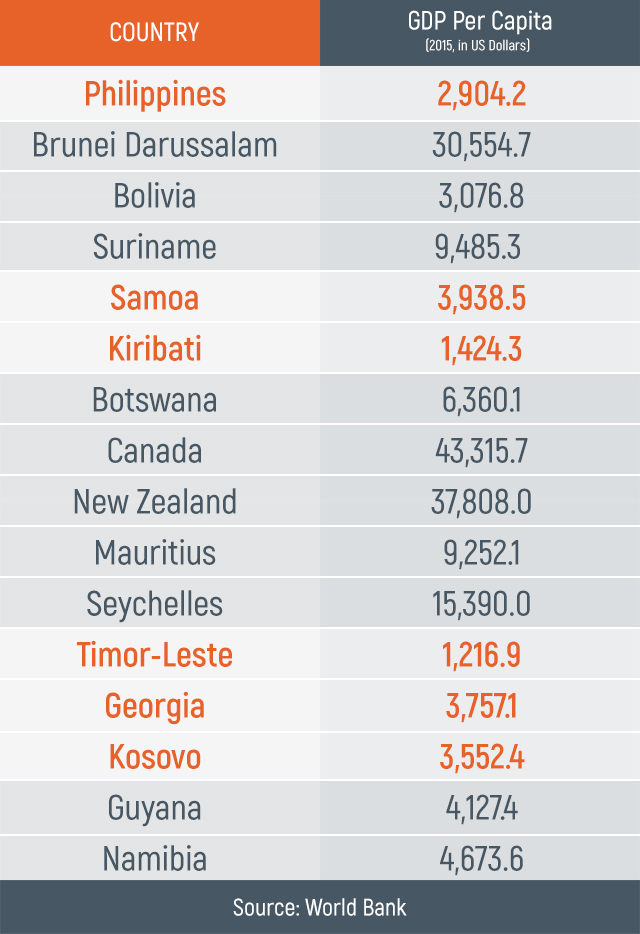 The Philippines’ 2017 budget is spending a huge portion for social services (40.14%) but pension and universal health care are among what government still needs to work on.

Based on estimates by the COSE study, government will need P143 billion or 5% of government expenditure and 1% of the GDP to be able to provide a P1,500-pension for all senior citizens.  This amount is almost equal to the P142 billion pension gratuity fund for the retired members of the military, police and courts that only benefits 3% of the aged population.

A survey conducted by the United Nations Economic and Social Commission for Asia and the Pacific (Unescap) found that expanding coverage for social protection is among the schemes that could distribute economic growth and limit inequality.

COSE emphasized that aside from generating revenue for this proposal, it is still ultimately a matter of political will.

“Whether or not there is fiscal space for a universal social pension will also depend on how much of a political priority it is compared to other expenditures,” said  their study. – Rappler.com