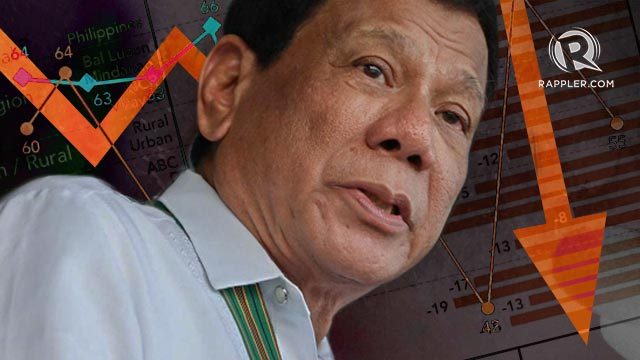 But the latest releases of the country’s two major polling firms agree on this: Duterte’s numbers show significant 6-point to 9-point year-on-year declines even as he keeps majority approval ratings.

This analysis uses Duterte’s gross satisfaction ratings in September 2016 and September 2017 and strictly takes into account the error margins of the surveys, which show the range and limitation of the surveys given the small samples.

Don’t make the mistake of comparing SWS net ratings (48% in latest survey) with Pulse Asia’s gross ratings (80%). They are apples and oranges.

The SWS September 2017 survey shows 67% of Filipinos remain satisfied with Duterte while 19% were dissatisfied. That’s a net of 48%. The undecided accounts for a significant percentage of 14%.

Pulse Asia’s media release presented only the gross satisfaction ratings of Duterte. We cannot compute for the net ratings.

The difference in the gross satisfaction ratings of the two surveys – 67% in SWS and 80% in Pulse – may still appear quite wide. But input the error margins and the survey possibility includes 70% for SWS and 77% for Pulse. There is still some discrepancy but it’s not as dramatc. I suspect it has something to do with the sample in the Visayas, as explained below. Using the gross ratings as basis for comparison, the September 2017 SWS survey reflects a 9-point decline in Duterte’s satisfaction ratings compared to last year. It’s down to 67% of the population saying they are satisfied with his performance compared to 76% who said the same thing in September 2016. It’s quite a significant decline given the survey’s ±2.5 error margin for national percentages. Based on the country’s population, it statistically means Duterte lost the support of at least 4 million Filipinos, the most conservative number, to a high of 14 million people.

The equivalent Pulse Asia survey shows a 6-point decline from 86% in the same period last year to 80% this year. It published a ±3 error margin for its national numbers, meaning the 6-point decline should be insignificant, given the small sample of the survey (1,200).

When asked about this, Pulse Asia chief research fellow Ana Tabunda told Rappler the error margin was rounded off from a smaller number. Given this smaller number, the decline in Pulse Asia then becomes significant. Duterte should look at his decline among the poor or Class D. They make up the bulk of the population and typically get to elect presidents during elections. They are not as active online as the more affluent ABC because only 38% of them have access to the internet and have Facebook accounts, according to Tabunda.

Duterte also lost support significantly in Balance Luzon, where opposition traditionally comes from. It is down 11 points in SWS (59% to 70%) and 12 points in Pulse Asia (72% from 84%).

SWS shows his numbers also fell significantly in the Visayas (11 points from 75% to 64%). But this is not reflected in the Pulse survey, which showed insignificant movement of 2 points (86% from 88%)). It is in the Visayas sample that the discrepancy between the two survey results appears to be problematic.

SWS also shows that his support among rural respondents dropped 13 points to 65% from 78% last year. This was not measured by Pulse.

Duterte continues to enjoy high support from Mindanao – 82% in SWS and 92% in Pulse. The 1-point to 6-point drops should be ignored given the error margins of 6 points.

Any movements in socio-economic classes ABC and E must also be ignored. The sample is too small to expect results that are representative of the groups.

SWS had a sample of 1,500 respondents while Pulse had 1,200. The error margins are 2.5 and 3 points nationwide, respectively, and 6 points regionally. The exception is Balance Luzon where SWS published a 4-point error margin.

The declines are expected but they should serve as reminder to the close to 1.5-year-old administration that President Duterte is not an exception to the rule. His numbers will continue to fall if he fails to address the concerns.

His predecessor President Benigno Aquino III recorded about the same satisfaction rating in SWS (70%) after his first year in office. Duterte registered higher numbers than Aquino (72%) in Pulse Asia.

Duterte’s survey decline was captured during a busy news cycle that covered the aftermath of September 21 protests to remind Filipinos of the dangers of martial law as Duterte himself had teased the public about expanding martial law in Mindanao to cover the entire country.

The survey was also conducted as protests intensified against the killings of minors accused of involvement in illegal drugs. It was conducted after the death of Kian delos Santos, a police operation that Duterte admitted was questionable based on the CCTV footage of the incident. It was followed by the deaths of Karl Arnaiz and Reynaldo de Guzman and the investigation that came after. (READ: CBCP: ‘In the name of God, stop the killings!)

The survey period was also conducted after the police announced it was going to replace all the police in Caloocan City where many of the killings have been reported and after the death of a UST law student due to hazing.

Other national conversations before the survey period include the continuing probe on the P6.4-billion shabu shipment, the court decision to allow former Senator Jinggoy Estrada to post bail, and the death of a “drug lord” from Iloilo. – Rappler.com