The deafening silence of ASEAN on human rights violations 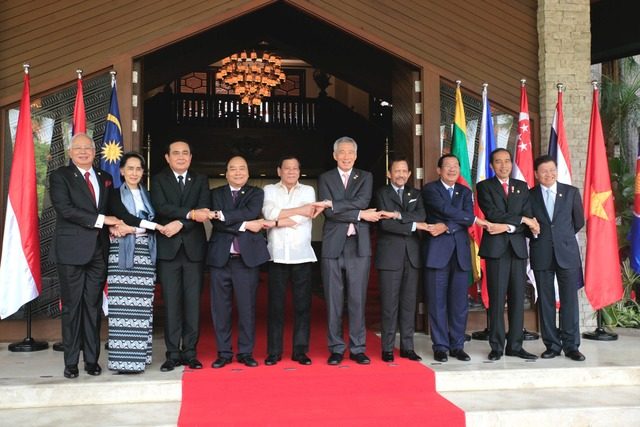 MANILA, Philippines – There is a deafening silence on the part of the Association of Southeast Asian Nations (ASEAN) when it comes to human rights violations.

This comes at a time when some citizens of most, if not all, of ASEAN member-states are experiencing some form of oppression by their own governments. Rising authoritarianism cripples various freedoms that should be universally enjoyed.

To name a few, there has been a slaughter of suspected drug personalities in the Philippines, Rohingya Muslims are subjected to systematic attacks in Myanmar that have forced more than 600,000 to the borders, and a government crackdown has suppressed opposition and a free press in Cambodia.

In Vietnam, there is an escalating crackdown on dissidents and human rights defenders while military rule continues in Thailand. (READ: Press freedom: What challenges do ASEAN journalists face?)

ASEAN – founded in 1967 to promote peace, stability, security, and prosperity, and which has grown from 5 to 10 members across the region – could have been the perfect influence on human rights standards among its member-states. (READ: What you need to know about the ASEAN)

But Phelim Kine, Human Rights Watch (HRW) deputy director for Asia, said that the association has consistently failed to harness its influence. It always falls short in ensuring that the countries follow benchmarks when it comes to protecting the rights of their citizens.

“Human rights have been the orphan child of ASEAN’s policy portfolio,” he told Rappler.

Perhaps the “biggest” step it has taken is the adoption of the ASEAN Human Rights Declaration (AHRD) in 2012. It sought to reaffirm the countries’ obligation to the Universal Declaration of Human Rights, among other United Nations treaties.

But according to Kine, everything that ASEAN has done in the field of human rights is all “very cheap lip service.” This is evident in the lack of “meaningful and substantive” human rights policy or actions in its 50-year history.

The ‘non-interference’ that binds ASEAN

The inaction of ASEAN is evident mostly in the way it has been handling the ongoing violence against the Rohingya Muslims in Myanmar. The association has been heavily criticized for not doing enough to hold accountable government forces and other internal groups responsible for the slaughter of thousands of Muslim minority.

In September 2017, the ASEAN Chairman’s Statement released on the humanitarian situation in Myanmar’s Rakhine State failed to even mention the Rohingyas. But Malaysia said it was a “misinterpretation of reality of the situation.”

“The Rohingya crisis is among the worst human rights catastrophes in Asia in years and demands concerted global action,” Brad Adams, HRW Asia director, said. “World leaders shouldn’t return home from these summits without agreeing to targeted sanctions to pressure Burma to end its abuses and allow in independent observers and aid groups.”

So why does it seem as if ASEAN member-states are turning a blind eye to the allegations of abuse?

According to Kine, the “silence” is mainly rooted in the so-called “non-interference” principle. It is one of the 6 fundamental principles adopted via the Treaty of Amity and Cooperation (TAC) of 1976:

On the surface, it may look like this is a way to improve the independence of one country, considering how ASEAN member-countries share a history of being colonized.

But for Kine, the “non-interference” can serve as a de facto code of silence, particularly on the issue of human rights. While this leads to the cohesion of countries into a unit, it does so at the expense of human rights and democratic freedoms of many of their people. (READ: Rohingya: The people ASEAN refuses to name)

“ASEAN, at this particular time in history, has profoundly serious human rights issues that desperately need regional action and regional coordination,” Kine said. “But the fact is that the ASEAN is hobbled by this non-interference clause and so there is no meaningful action towards human rights.”

Meanwhile, in April 2017, Duterte even stressed the non-interference principle that governs the association.

“Dialogue relations can be made more productive, constructive if the valued principle of non-interference in the internal affairs of the ASEAN member states is observed,” he said then.

Many have called for the removal of the non-interference policy, particularly to give way to an effective handling of human rights in the region. Its necessity is questioned amid the need to address various issues plaguing ASEAN – the Rohingyas in Myanmar and the South China Sea dispute, among others. Even the existence of the ASEAN Intergovernmental Commission on Human Rights (AICHR), which was established only in 2009, is “purely eyewash.”

“It serves no substantive function,” Kine said. “It is used essentially to deflect international criticism about ASEAN’s human rights record.”

AICHR has been heavily criticized for having no power and being toothless for almost 8 years since it was created. It mainly operates through consultation and consensus among 10 representatives from member-countries who also enjoy veto powers. This makes it hard for the commission to release reports about a member-state’s alleged violations.

It also does not help that there are no existing penalties that can be imposed on countries found to have tolerated human rights violations. This is true even if violations go directly against ASEAN’s declaration of human rights.

Unlike the European Union (EU) and the United Nations which investigate and eventually sanction those who fail to act on their bad human rights records, ASEAN member-countries are basically left unchecked.

This is basically why many of them have serious human rights issues, according to Kine.

“There is essentially a de facto policy of complicit silence against such abuses,” Kine said. “[There is no] attempt to address those issues and prod government to improve their behavior.

The silence of ASEAN when it comes to human rights is disheartening, considering its power in the region. It could have been the perfect advocate, the central voice, in the protection of human rights of all its representative population. (READ: ASEAN at 50: Golden year or mid-life crisis?)

For it to be more effective and have more teeth against human rights abuses, Kine said that the member-states themselves need to have the political will to be more responsive and less abusive.

For starters, ASEAN members should not allow the death penalty. They should not curtail freedom of expression and association, among others. There should also be a serious movement toward appreciation and respect for universal human rights.

These benchmarks, just like what the EU and UN have, should be a requirement for countries if they want to maintain their membership with ASEAN. Being kicked out of the association might mean losing “meaningful and subtantive” economic and financial benefits, among others. As it currently stands, the goal of human rights advocacy and protection as a central point in ASEAN may not be achievable in the near future.

The lack of a more aggressive stance against human rights violations in the association unfortunately serves the interest of member-countries who have bad human rights records.

It can be expected that any discussions may not prosper or that change may happen anytime soon as these countries “favor ASEAN as it is because it provides a perfect impunity for abuses in the past and present.”

“For the forceable future, it will be a non-starter because the authoritarian and abusive governments that make up much of ASEAN see no gain to advocate for and be subjected to human rights benchmark,” he said.

But it is best to recognize that it is a dark time, not just in Southeast Asia, but also across the world. The fight is challenging and while it is not a winning cause, the public should be reminded that calling out abuses is also not a lost cause.

According to Kine, advocating for rights to be protected in these trying times has its “peaks and valleys.”

While ASEAN and other regional organizations may have the influence to at least get the ball rolling when it comes to discussions on human rights, inaction should not stop citizens from moving forward on their own fight.  (READ: Human rights in Duterte’s first year: Where do we go from here?)

“It requires marshalling the forces within a country where these abuses are taking place to push back,” Kine said.

“We are the resistance. Civil society, activists, and the media that are pursuing a really fact-based effort to document what is going on in their countries are resistance. Facts are resistance,” he added. – Rappler.com