ASEAN 2017: A wasted opportunity for the West Philippine Sea 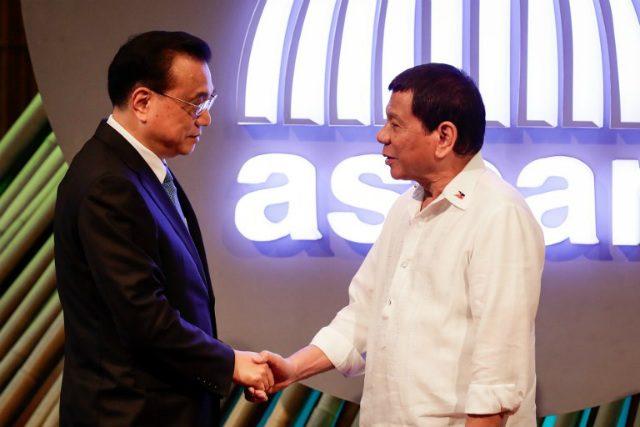 MANILA, Philippines – When the Philippines won a case against China over the West Philippine Sea (South China Sea), experts hoped the Association of Southeast Asian Nations (ASEAN) would rally around the ruling to tame an aggressive Beijing.

The perfect time for this would have been the Philippines’ ASEAN chairmanship this year.

The Philippines as ASEAN chair, at least, could have pushed for a mention of the Hague ruling in an ASEAN statement. The Southeast Asian country could have led ASEAN, too, in standing more strongly against China’s militarization of the South China Sea.

The Philippines under President Rodrigo Duterte wasted this opportunity.

For one, ASEAN never cited the Hague ruling in its statements during the Philippine chairmanship.

The Philippines’ last ASEAN Chairman’s Statement this year, for example, avoided criticizing China for militarizing the South China Sea. The statement, released on November 16, was also softer than previous ASEAN statements that tackled the disputed waters.

On August 8, Philippine Foreign Secretary Alan Peter Cayetano even admitted that the Philippines didn’t want to include China’s island building activities in a joint communiqué issued by ASEAN foreign ministers.

But what do we expect from a country that has downplayed its legal victory in exchange for economic benefits and to avoid an imagined war with Beijing? (READ: Duterte’s ASEAN chairmanship was a win for him and China)

Poling is the director of the Asia Maritime Transparency Initiative (AMTI) of the Center for Strategic and International Studies (CSIS), the independent US-based think tank that tracks China’s island-building activities in the South China Sea.

Poling was recently in Manila for an ASEAN conference organized by the Stratbase Albert del Rosario Institute, an independent think tank, on November 8. We interviewed Poling on the sidelines of the Stratbase forum, and later emailed him follow-up questions about ASEAN and the South China Sea.

In an email to Rappler on Friday, November 17, Poling explained: “Nobody should expect that ASEAN is equipped to resolve something like the South China Sea disputes. That is up to the claimants (multilaterally, not bilaterally).”

“But to have the grouping unwilling to even speak up for its members when they are bullied by an outside power, as Vietnam was over its oil and gas drilling this summer, is a real shame,” Poling said.

Roberto Romulo, former Philippine foreign secretary, began his assessment by saying it is “unfair” to blame the Philippines alone for ASEAN’s performance this year.

“The fact remains that ASEAN is not united, thanks to about two or three countries that are highly influenced by the Chinese. So for us to blame just the Philippines in this chairmanship is unfair,” Romulo said on the sidelines of the Stratbase forum on ASEAN.

Romulo, however, said he was “disappointed” that during the Philippines’ chairmanship of ASEAN, “certain issues have not been brought up, at least in terms of following the rule of law,” for example in the South China Sea.

“That, to me, is extremely disappointing,” the retired diplomat said.

Asked to provide specific examples, Romulo said, “The fact that the issue of the Hague tribunal decision has been set aside, to be brought up on another day.”

He explained: “At the end of the day, everyone, even a superpower like China, has to understand that if they have to be respected, they must follow the rule of law. And until they do that, they will not get the entire respect of the world.”

The problem is that the way the Philippines asserted its claim over the South China Sea, according to Romulo, was “a little bit weak.”

Framework COC ‘has no value’ – expert

A bright spot in the Philippines’ ASEAN chairmanship should have been progress in crafting a Code of Conduct (COC) in the South China Sea.

The COC was earlier envisioned as a legally binding document to preserve peace and stability in the South China Sea.

It is supposed to build on the non-binding 2002 Declaration on the Conduct of Parties in the South China Sea (DOC).

ASEAN and China have failed in crafting a COC for the past 15 years.

During the Philippine chairmanship, ASEAN and China produced a framework COC, and announced the start of COC negotiations.

Experts, however, criticized the framework COC for simply reiterating the DOC.

“The framework has no value,” Poling told Rappler on the sidelines of the Stratbase forum.

“The framework is more vague than the DOC was 15 years ago, and it doesn’t say anything new. It is a one-page outline that reiterates general principles that were in the DOC or in the 2011 Guidelines on the Implementation of the DOC. There is nothing new in it,” Poling said.

“If there’s value in this, it is that the Philippines proved that even given every opportunity, China will not negotiate a binding COC,” he said.

Poling also said he doesn’t see a legally binding COC coming, at least in the next 10 years.

Poling pointed out that China “continues to build facilities” on disputed islands, while “it’s only the Philippines and the Southeast Asian claimants that are restraining themselves.”

“This is what the Chinese want. Without significant pressure, why would they ever come to the table and say, okay, let’s talk about a legally binding COC?” he said.

Poling said what China wants “is a vague document of principles that doesn’t really restrain their activities in any way.”

Why COC should be legally binding

The AMTI director also emphasized that the COC should be legally binding.

This is in contrast to the statements of Cayetano, who is entertaining thoughts of a non-legally binding “gentleman’s agreement” for a COC.

Jay Batongbacal, director of the University of the Philippines Institute for Maritime Affairs and Law of the Sea, also criticized the recent developments in crafting a COC.

Asked for his views on the start of COC negotiations, Batongbacal said it was a “mountain out of a molehill.” For one, ASEAN and China did not specify the date or venue for the start of COC talks.

“For me personally it’s nothing. It’s not substantial at all,” he said, calling it “some kind of procedural agreement.”

“It would have been slightly better if they had the actual date and venue,” he said in a phone interview with Rappler.

In a separate interview on the sidelines of the Stratbase forum on ASEAN, Batongbacal said the regional bloc has been “accommodating too much.”

He also stressed the need for ASEAN to discuss the implications of the Hague ruling won by the Philippines concerning the South China Sea.

“If you’re talking about the South China Sea, the concrete output really should be a signal that ASEAN should seriously start discussing the implications of the ruling on them. Even if they don’t want to talk with China, then at least have a discussion among themselves,” Batongbacal said.

Hague ruling not only for the Philippines

ASEAN, after all, is key in enforcing the Hague ruling.

Enforcement, Reichler said, “will depend on the conduct of other affected states and the international community in general.”

“It will depend to a great extent on how vigorously all of the affected states, all of the states which have been prejudiced by the 9-dash line, assert their rights against China,” Reichler said.

“If these other states stand up for their rights in the way that the Philippines has done, you’ll get the situation where all of the neighboring states are insisting that China withdraw its illegal claims and respect their legal rights which have been defined and recognized and acknowledged today, because those states have the same rights as the Philippines,” the international lawyer said.

He added that “although the award is legally binding only on the two parties, China and the Philippines, it has very strong implications for other coastal states in the South China Sea.”

The ball was in the court of ASEAN, which the Philippines chaired a year after the Hague ruling.

Now what did Duterte do? – Rappler.com