Eyewitness to the Marawi siege

Nov 30, 2017 10:00 AM PHT
Bobby Lagsa
Facebook Twitter Copy URL
Copied
May 23, 2017 starts as a normal day for residents living on Abu Musa al-Ashari Street in Marawi City. Little do they know their street will be the site of the city's biggest crisis.

MARAWI CITY, Philippines – On May 23, 2017, at around 2:30 pm, residents of Barangay Basak Malutlut were going about their ordinary routine. But that day, the lives of more than 200,000 Marawi residents, would forever change.

Along Abu Musa al-Ashari Street is the apartment unit rented by Abu Sayyaf leader Isnilon Hapilon. It is on the left end of a 4-door apartment compound. On the 3rd floor of the building are single-room units, and 3 more units in a separate building at the back of the main building.

Each apartment unit has two stories, each with its own gate.

The unit where Hapilon was hiding was rented under the fictitious name “Samira.” None of their neighbors suspected it was the hideout of the country’s most wanted terrorist.

At the back of the building is a swamp; across it is a street where another house was rented by the terrorists.

Another apartment was rented by the terrorists, about 50 meters away to the left from Hapilon’s unit. 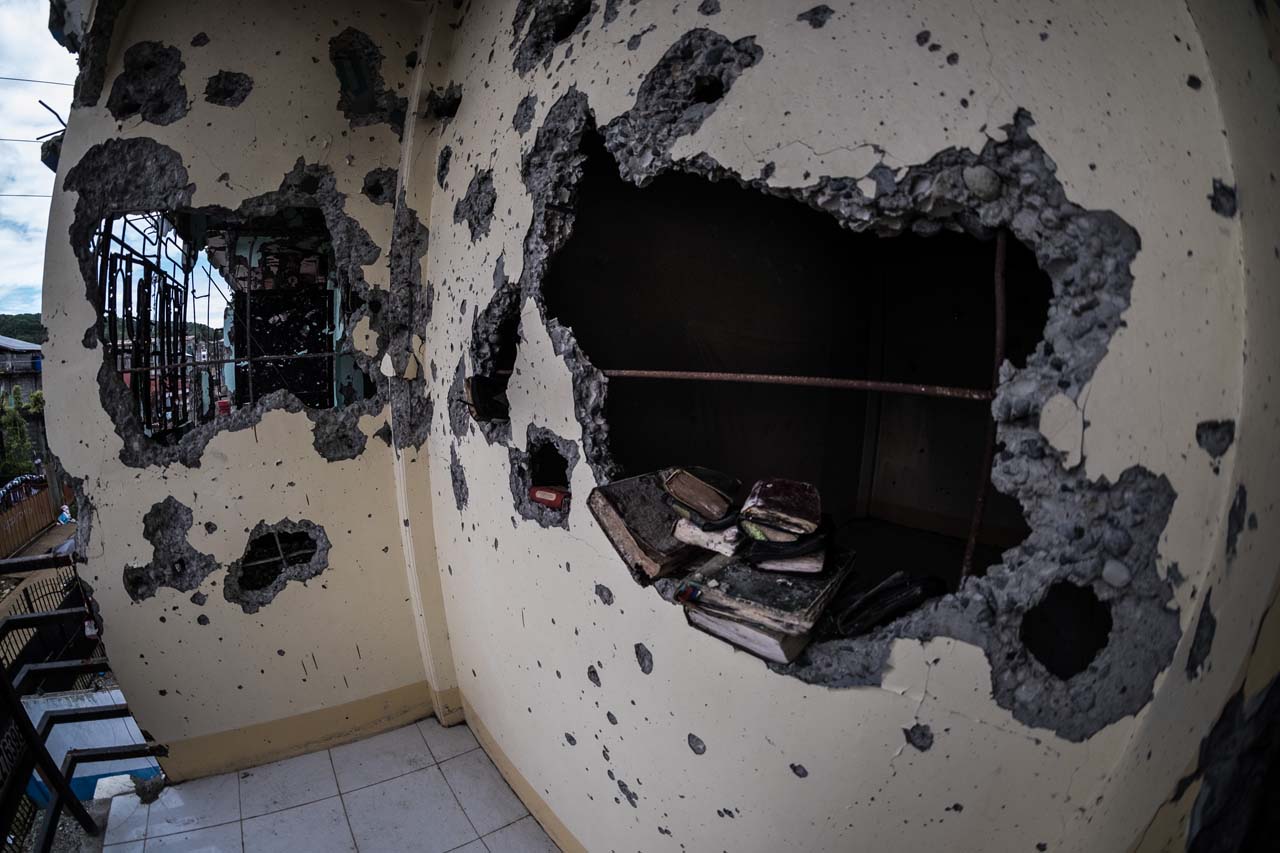 The houses are just a block away from Masjid Abu Bak’r where thousands of Muslims joined a Tabligh convention.

Nasseer (not his real name), who lives two houses away from the apartment, said that it was difficult to know who were going in and out of the terror leader’s house because there were thousands of people attending the week-long convention.

Neighbors sensed that at night, people were coming in and out of the apartment. They were wearing the burqah, an outer garment worn by women in some Islamic areas to cover themselves in public.

“You don’t wear burqah at night,” said Ayna, who lives 4 houses away.

The teenagers also noticed that every morning, there were lots of garbage inside sacks outside the gate of the apartment.

A baker on the main road also said that every day following the end of the convention, someone would buy bread by the hundreds, even after those who joined the convention had left.

The convention was the perfect cover for the terrorists to penetrate the city. 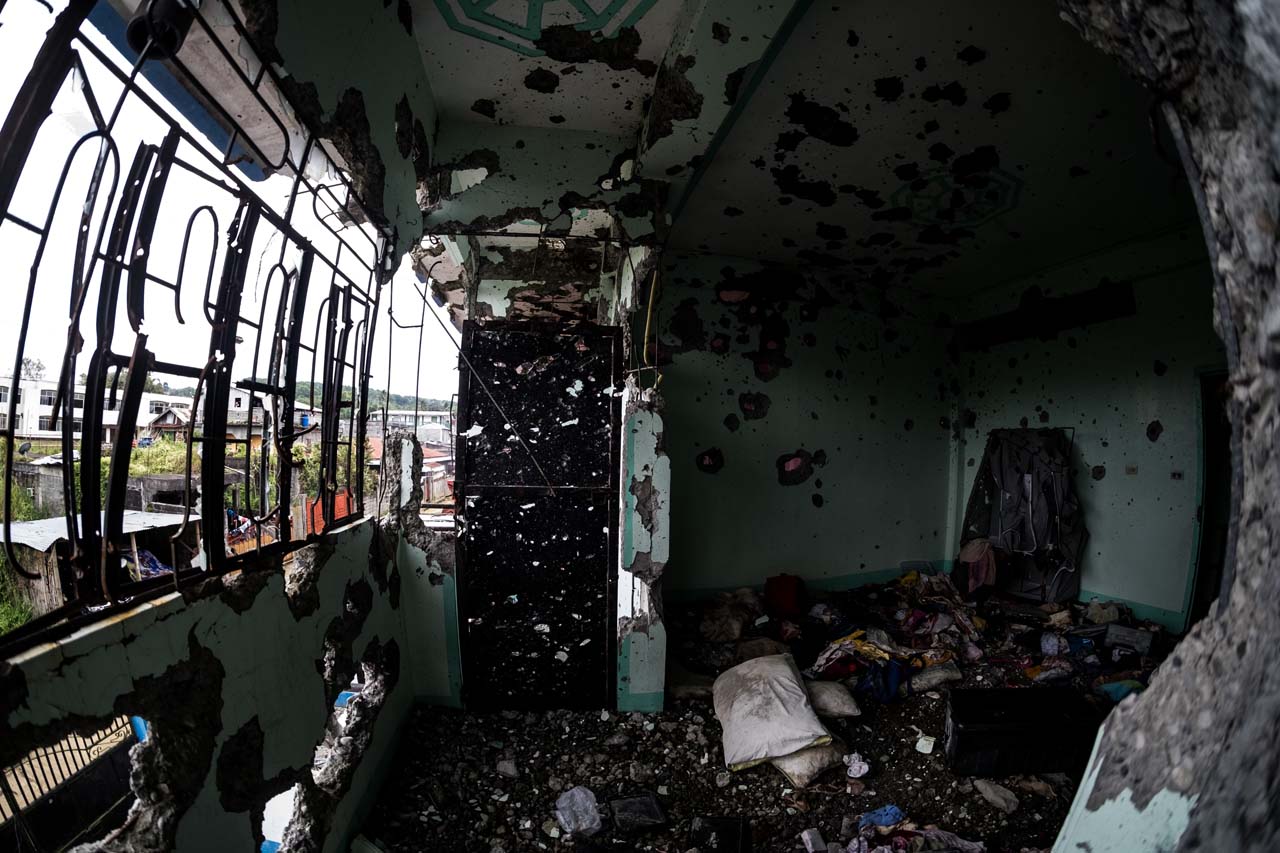 Ayna said that she was in their house when the operation to arrest the Maute brothers took place. The military instead found Hapilon – a “target of oppurtunity”, said Lt Colonel Jo-ar Hererra, then spokesperson fo the army’s 1st Infantry Division.

Ayna said that her brothers and cousins were on the street when they heard the first blast.

“My brother told me that a white van, loaded with men in uniform, stopped at the gate of the apartment,” she said.

Behind the van were two armored personnel carriers and several other vehicles.

As the operatives came out of the van, they put explosives on the gate to breach it. After the explosion, Ayna went out to check what was happening.

She saw 8 men going inside the gate. Then gunfire started.

Nasser, sitting in his store, ran to his house and hid along with his family. “The firefight was so intense; I cannot see it, but we can hear it,” Nasser said.

Ayna said that her grandmother then called them back inside the house. Before going inside, she saw 4 operatives come out of the gate; the last one was burning.

Barry Bandrang, a social worker based in Cotabato City, was renting one of the apartment units in the compound. His wife is a public school teacher. Their 4 children, aged 11, 9, 7, and 4, were left inside their unit on that day.

Bandrang said that their children were home alone when the gunfight started.

He hurriedly drove back to Marawi when he heard the news an hour after the fight started.

Bandrang said that he contacted his wife but there was no way they could get to their children.

“We almost gave up on the fate of our children as the fighting continued into the night,” he said.

Bandrang said that the terrorists took the children and 13 boarders to a room at the back, and were trapped in the firefight that lasted for 21 hours. They were rescued before dusk of May 24. 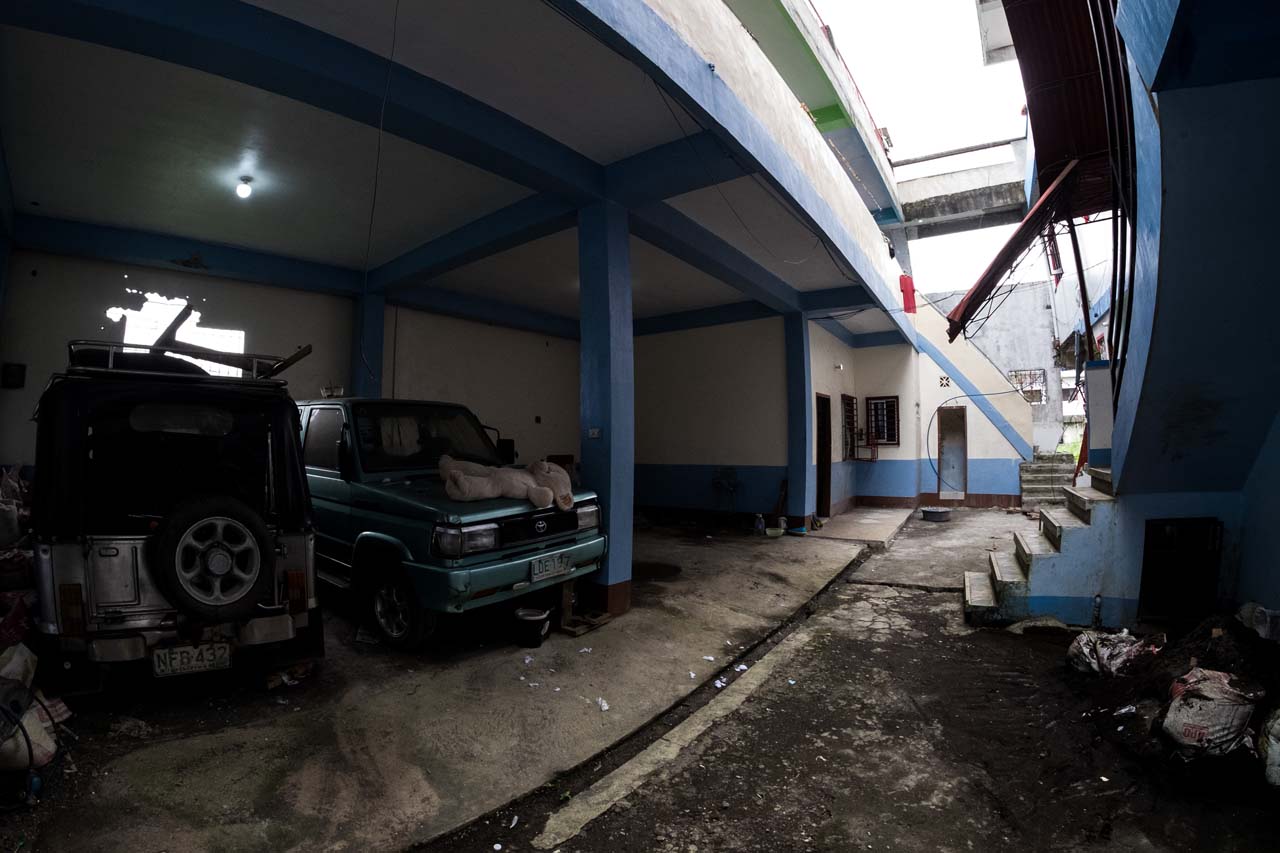 Residents said there were fatalities inside the unit of Hapilon – a woman and a child.

He was also told that some terrorists were trying to use the trapped residents as human shields while others argued that hostages can slow their escape. In the end, they were left behind, padlocked inside the room.

As the gunfights were getting intense across the city, residents in Buadi Sacayo and Sumndad Streets in Barangay Bangon saw Hapilon and Omar Maute around 4 pm on May 23.

They came to Buadi Sacayo street through Luksadato street, the street right across the swamp, after escaping the apartment early on.

Omar was onboard a commandeered black pick-up truck while Hapilon was seen inside a Toyota Innova.

Fully armed terrorists wearing black were converging at the corner, where a waiting shed stood in the middle of the triangle road.

“Paulo,” one of the residents in the area, took a video from the window on the second floor of their house. 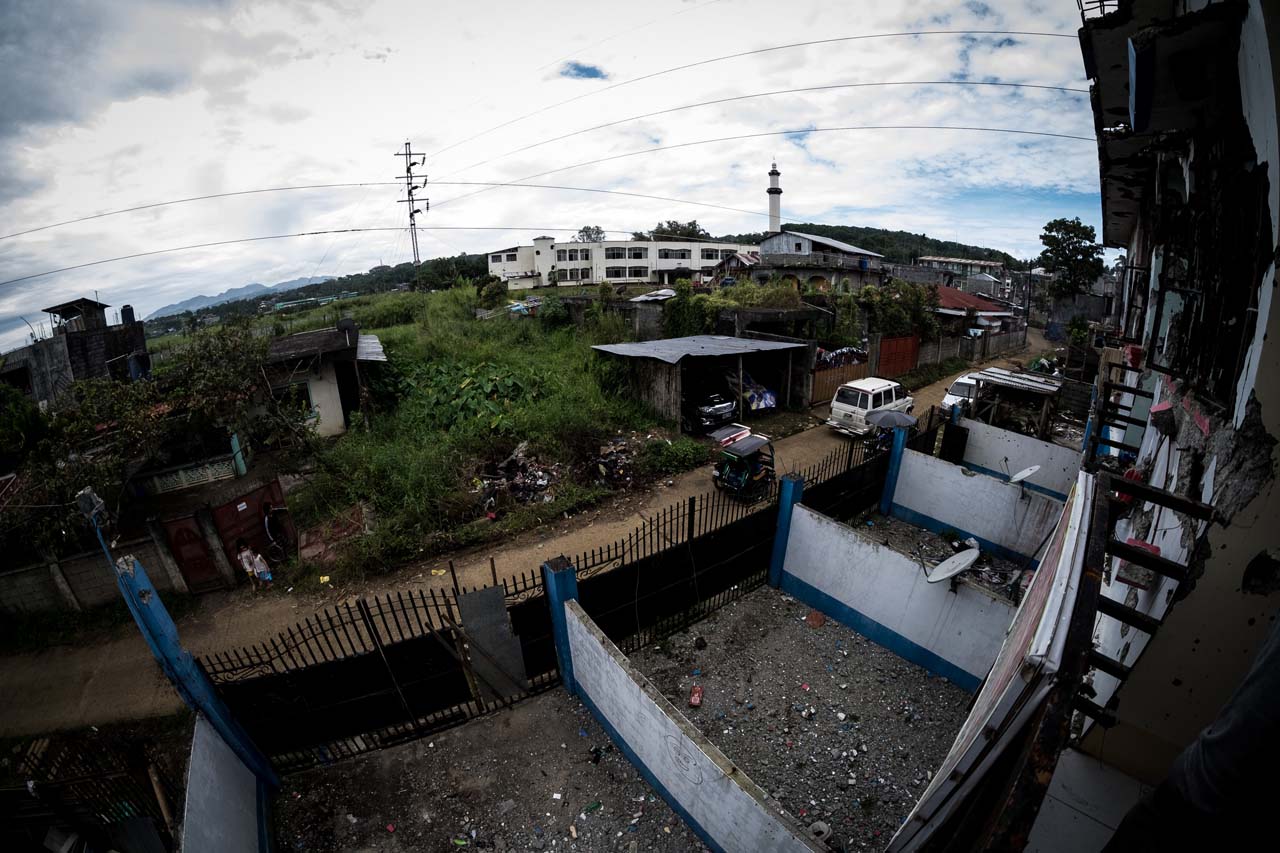 Just down the corner, about 150 meters away, is an army detachment.

The terrorists then started fortifying the corner of the road with sand bags they got from a nearby construction supply store. They also put an ISIS flag at the waiting shed.

Another resident, who was manning his store on the corner, saw Hapilon. He said that one former city councilor came towards Omar and tried to tell them not to stay in the area because there were residents afraid of them.

“Omar then got angry and fired his weapon in the air,” the resident said.

Before sunset on May 23, Hapilon and Omar had gathered at least a hundred fighters at the waiting shed.

On May 24, video shared by the residents showed that the terrorists were marching down the street.

Residents of Barangay Bangon saw the terrorists manning every corner, while firefights were ongoing in other areas. 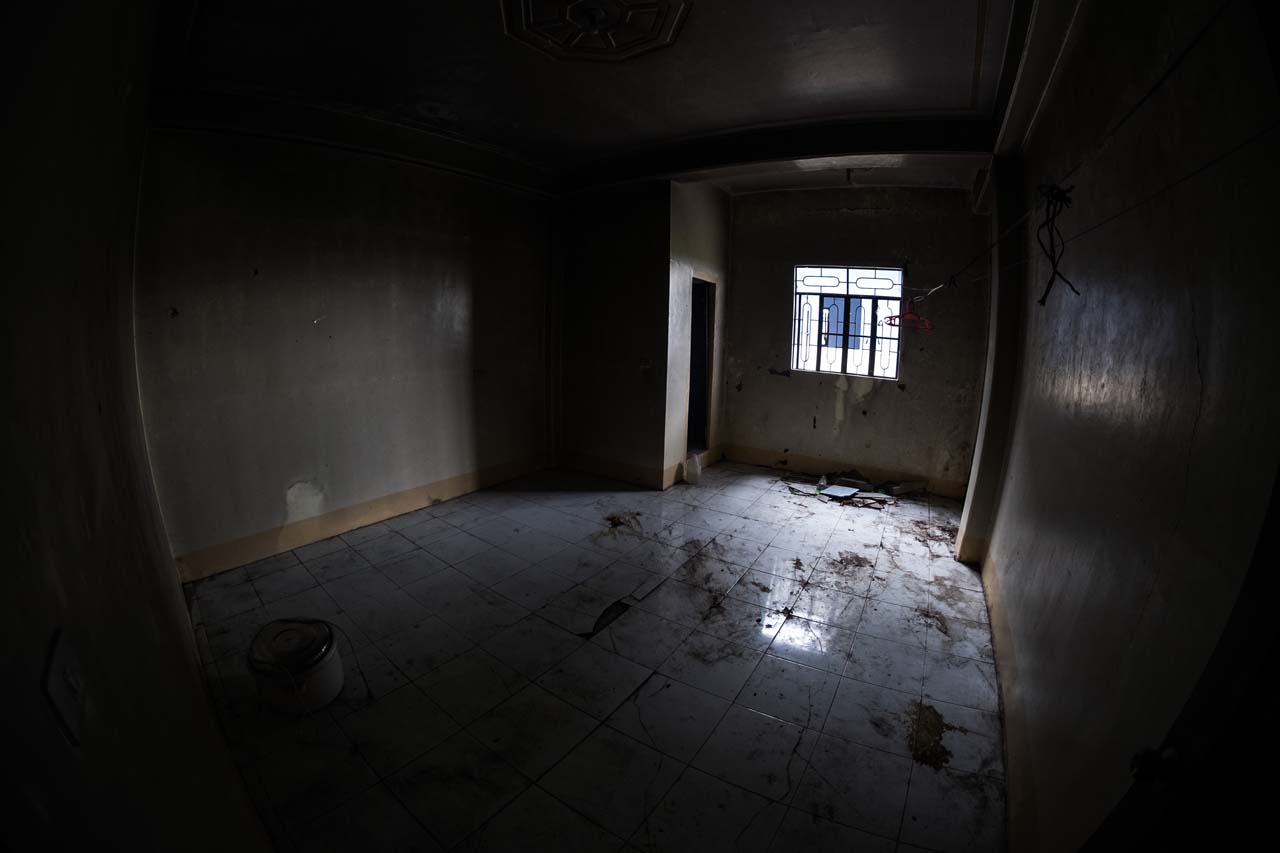 Inside the rented unit of Hapilon, signs of dried blood remain.

The unit was already cleaned; the debris from the 2nd floor had been dumped on the garage.

A large rice cooker is inside one of the rooms. A burnt LPG tank sits in a corner in what was once the kitchen of the unit.

On the wall on the top of the stairs, two papers are posted. Each has names written on it.

In one paper, the word “Ribat” was written. Below it are numbers with corresponding names. Ribat could mean guard duty. On another paper is the word “Qumat”; below it are more names. 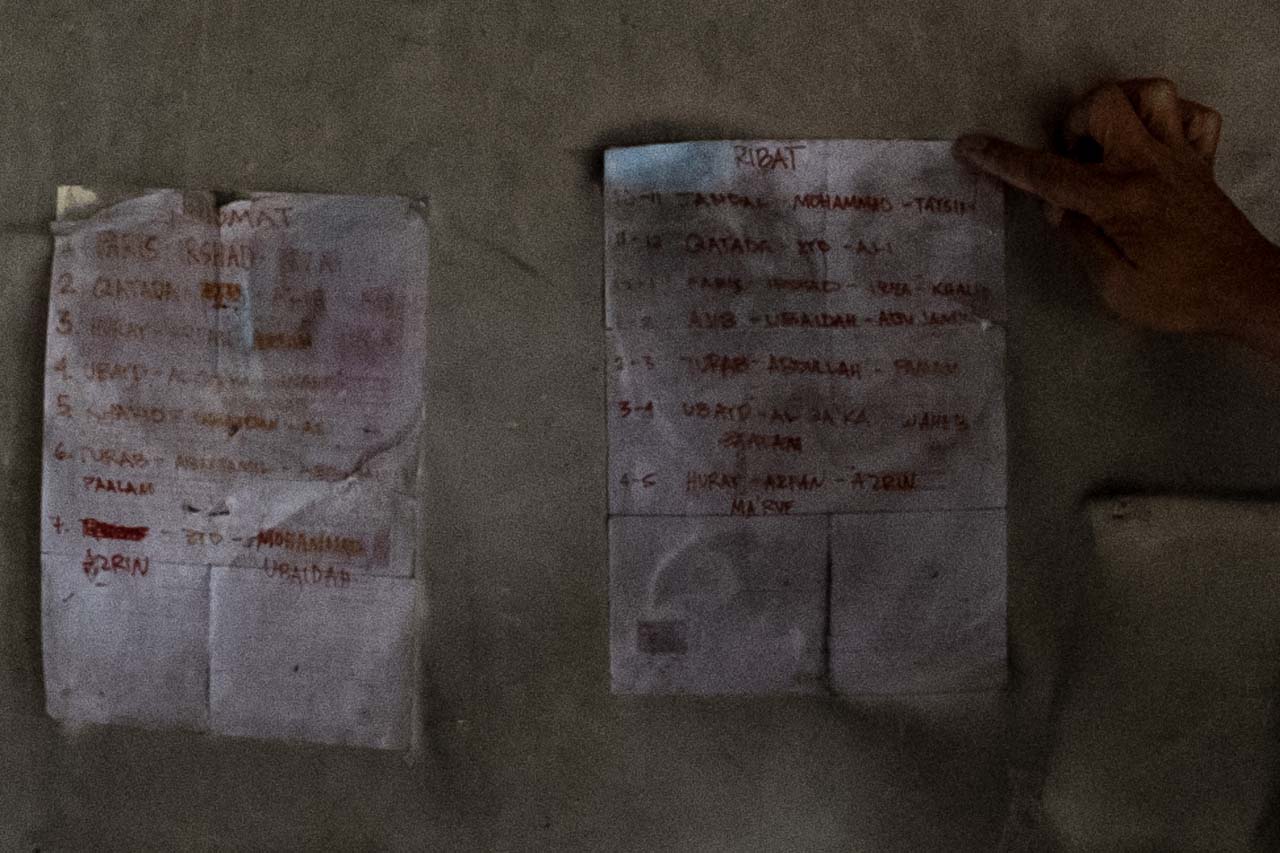 There are signs on the wall that there were other sheets of paper posted on it.

Inside the room overlooking the gate and the street is a prominent square mark; something covered the wall for some time that it left an indentation. It could have been an ISIS flag once put over it.

Several Quran of different sizes were left on the window.

For residents who live on Abu Musa Al-ashari Street, the bullet-riddled building will serve as a grim reminder of what happened on May 23, 2017, when their city became a battleground between government security forces and terrorists who pledged allegiance to ISIS.

Omar Maute and Isnilon Hapilon were killed by government soldiers on October 15, 2017. Close to a thousand died in the 5-month combat operation that laid to waste almost a quarter of Marawi City.

The residents have now returned to safe areas in the city, while across Lake Lanao and Agus River, the ruins serve as witness to the grim reality of war. – Rappler.com