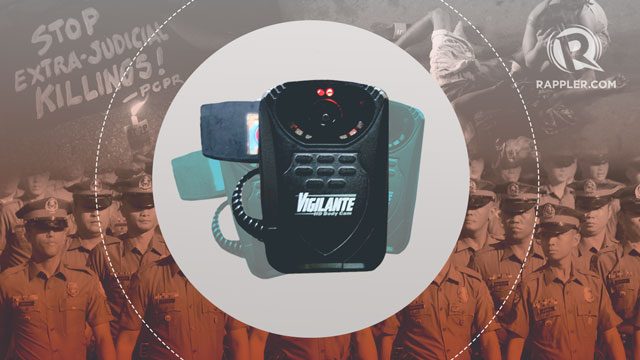 Facebook Twitter Copy URL
Copied
The PNP's latest initiative, which it prepares to roll out in 2018, involves more than just strapping another gadget to cops who conduct raids and arrests

MANILA, Philippines – When 17-year-old Kian delos Santos was killed defenseless by Caloocan cops, his family could point to only one credible witness to recount what happened: a CCTV camera. It was installed by barangay officials near the community basketball court, where cops in civilian clothes dragged the boy across, thus capturing the incident.

With the irregularity of Delos Santos’ case being the first to be unearthed through film out of almost 4,000 drug-related deaths recorded by the police, questions have been raised: Could there have been others before him? What if cameras recorded all the operations? Even better, why not strap those cameras to cops themselves?

These questions made their way to the halls of Congress, with lawmakers in both the House and the Senate demanding that the PNP clip on the gadgets on the cops to prevent another Filipino getting killed kneeling and pleading. Top cop Dela Rosa, dismissive at first, gave in.

Body cameras were exalted as the solution to the controversially bloody war on drugs. The PNP aims to release them by 2018.

There’s still a long way to go, however, before they are rolled out to the field to prevent abuse and crime. The PNP still has not procured body cameras, and they have yet to craft operating guidelines for using the gadgets.

The cops – the camera’s carriers – also still have scalawags among them.

All this while their anti-drug campaign continues. SWAT officer SPO2 Andrew Mendres sat idly at his desk, waiting for a call from a crime scene. He wore his full gear, an operative’s black overall, the rim of his baseball cap casting a shadow on his eyes . On his right chest hung a body camera that blinked red and green. On his left, a crucifix.

Even before the PNP’s promise of requiring body cameras in police operations, the Pasig City Police Station had already received 48 body cameras from their local government in September 2017.

It was during the build-up to the time the PNP was to be excluded from the war on drugs a second time.

Since policies from Camp Crame had not been set up, Pasig City Police chief Senior Superintendent Orlando Yebra took it upon himself to impose verbal orders first. They have prepared detailed guidelines, he said, but they have yet to be approved by district higher-ups.

While he appreciated the local government’s donation, SWAT officer Mendres said he has spotted crucial blind spots with the camera he carries.

First, he said, the cameras do not have night vision. This is a problem for them since most anti-drug and crime operations happen when the sun has set.

“And even if it’s not night time, there are dark areas during the day, because there are buildings that are enclosed. We really need night vision,” Mendres shared to Rappler in Filipino.

Officers can hold a flashlight to where they want to record, the SWAT man said, but that would make them visible targets to dangerous suspects. It’s bad enough that the cameras blink red when they press record. The cameras can record 4 hours before shutting down and its memory getting full. Mendres found these features too low for 12-hour shifts of cops.

“It hangs. Sometimes you need to delete, sometimes it goes full without you noticing),” Mendres said.

“Sometimes, there might be an unexpected shootout. What if you used it the whole day then there’s suddenly a shootout or an accident? It’s better that it works for 24 hours),” Mendres added.

With the scarcity of body camera units, Mendres said there are officers who want the cameras more, and there are those who prefer not to use them. He said he does not know their reasons for not wanting to wear them.

Ideally, Yebra told Rappler, there should be at least one cop wearing the body camera in every operation. A standard police operating team usually has 7 team members.

Security expert Kathline Tolosa warned that these mishaps and shortcomings are precisely what the PNP needs to address with detailed rules and policies.

“At first glance, it would make sense to have the body camera because, as used in other countries, it could be an insurance for both the cop and the citizen. Yeah, sure. But, of course, if you purchase an equipment, then how about the maintenance? How are you gonna make sure that it’s going to be used properly?” said Tolosa, the executive director of independent think tank Security Reform Initiative.

To prevent these possible excuses of camera glitches, the PNP and the National Police Commission (Napolcom) internally agreed on a minimum requirement of specifications for cameras cops will use, Rappler learned.

According to Napolcom Resolution Number 2017-369, the PNP itself initiated the move to standardize the body cameras in March 2017, fresh into their first return to the drug war.

The body cameras, the resolution reads, “can be worn in the body or installed in the dashboard of a police patrol vehicle of the frontline law enforcers to increase its transparency during legitimate police operation and other activities by recording the event which can be reviewed, studied, and used as evidence.” The PNP plans to get 37,000 cameras with these specifications. According to the latest announcement of PNP spokesperson Chief Superintendent Dionardo Carlos, the PNP is still looking for a body camera provider.

When the units arrive, Carlos said in a September 2017 press briefing, the PNP will prioritize distribution to operatives.

Until the PNP finds a supplier and procure the cameras, local police stations are encouraged to cooperate with local government units (LGUs) in getting body cameras, as what is being done by PNP chief Dela Rosa.

Dela Rosa has called on “well-meaning Filipinos” to give them cameras as they wait for the procurement of the gadgets. Without internal rules that guide LGUs or private donors, cameras below the PNP-Napolcom standard might continue coming in.

Pasig’s Yebra said the cameras, despite being below ideal quality, remain useful in operation. However, he admitted he has asked the local government for new ones with high-tier features. The handling of body cameras does not end with the operation.

SRI’s Tolosa pointed to the importance of storage and safekeeping that come after a day in the field. People and computers needed to process footage taken by the operatives.

Without directives from Camp Crame or Napolcom, Pasig police chief Yebra ordered desk officers from their operations departments to save and guard the recordings. His rule is that the footage be saved on a single computer per station.

As for access, Yebra said, “We have not talked about that.” His procedure so far, he said, is only himself as the city’s chief of police can weigh and approve requests for footage.

Napolcom Vice Chairman Rogelio Casurao told Rappler that the PNP and the Napolcom are still looking for companies that can supply computers that not only save footage but can also stream the cameras live from a command center.

As for the access, he said as long as requested clips will not compromise investigations, requests should generally be granted.

“It depends on the stage of the investigation. If there is a question as to the authenticity or the propriety of the activity of the PNP, that becomes very essential [in deciding to release them],” Casurao said.

“You must remember that we have freedom of information. It’s an executive order signed by the President requiring all government offices to be transparent, and I think that (body camera) is included there,” he added. But even if in time the PNP has enough cameras and rules to govern their use, Tolosa said they can only go so far if the cops who wear them do not have the right values and discipline.

“Let’s not be content with just having the body cameras. It goes way beyond having an additional equipment added to their uniform. It is really about looking at the indoctrination and the training,” Tolosa said.

“They should not only think about law enforcement but they should also be imbued with righteousness, uprightness, decency, and basic core values of honesty and integrity and competence in the police service. With or without cameras, they have to be good citizens of the country,” Casurao said.

Yebra, for his part, likened the cameras to guns: “It’s like a gun. You can have good, sophisticated, top-of-the-line, or new one, but what if the person who holds it doesn’t know how to use it or use it for the good? It’s just a tool for our police work.”

By indoctrination and training, Tolosa meant the combination of the intensive training of police “bagitos (newbies)” before admission into the service, and the continuous teaching and training as they go up the ranks and cross the different units of the PNP.

She said the training can heavily dictate what a cop does when deployed.

“Your indoctrination, and even sometimes your upbringing, comes in. It will be alright that you memorized about human rights, but what if it you haven’t internalized it?” Tolosa said.

Currently, the PNP provides human rights training seminars through its Human Rights Affairs Office, which links up with human rights groups in reminding cops of their boundaries as law enforcers.

“Maybe there is another way we can teach [about human rights] that it might leave a better mark,” Tolosa said. – Rappler.com