Proponents of state surveillance argue it’s events like these that justify it, especially where “national security” and the protection of citizens’ lives against serious security threats are at stake.

After receiving tips from foreign intelligence agencies, military operatives, along with the police, arrested Fehmi Lassqued – an Egyptian believed to be an ISIS recruiter in Manila.

Citing declassified reports, national police chief Ronald dela Rosa said Lassqued was previously a “government negotiator” and “commander” for ISIS in Syria. Tips also indicated he had been staying in Manila since July 2016 as a “recruiter” for the terrorist group.

An arrest was again made in early March, when authorities nabbed alleged Maute group subleader, Nasser Lomondot, and member Rizasalam Lomondot in Manila.

Nasser Lomondot was “one of the key planners [of] the attack” on Marantao, Lanao del Sur during the Marawi siege in 2017, according to the National Capital Region Police Office (NCRPO). (READ: The war in Marawi: 153 days and more)

When all 3 were arrested, authorities found the suspected terrorists in possession of firearms and explosives, which could have been used for other crimes.

Although it is not defined under Philippine law, state surveillance is commonly understood as the close monitoring of activity, behavior, information, and communications of an individual by the state. In some instances, it can also be conducted on groups or populations. (READ: What you need to know about state surveillance)

Surveillance can be carried out in several ways, some of which include wiretapping, bugging, or physical monitoring. Developments in communications have also allowed actors to access technology at more sophisticated levels.

As part of its purpose to protect the country from acts of terrorism, the Human Security Act allows law enforcement officials to intercept and record “any communication, message, conversation, discussion, or spoken or written words,” with the use of any type of surveillance equipment or any means suitable.

But while there may be little room to argue that Fehmi Lassqued, Nasser Lomondot, and Rizasalam Lomondot were suspected terrorists, the same cannot be said for people the Philippine government seeks to tag as “terrorists” under Republic Act 9372 or the Human Security Act. 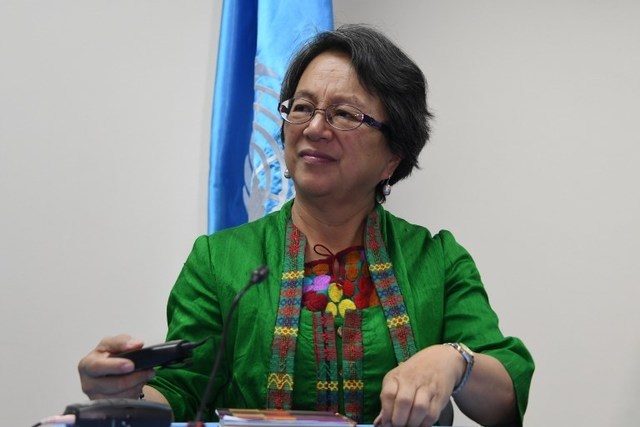 Among the more than 600 individuals listed in the Department of Justice’s (DOJ) petition are human rights defenders, a United Nations (UN) special rapporteur, deceased persons, and alleged communist guerrillas.

According to Karapatan, 8 names of individuals already deceased and two desaparecidos were also included in the petition.

“The scriptwriters of these lists could care less about whether these persons are already dead or reported missing, just so long as they can cover a wide range of activists and rights defenders to implicate. From the very start, these lists have no integrity,” Cristina Palabay, Secretary General of human rights group Karapatan, said in a statement.

Should the petition be granted, those on the list will become persons of interest in the government’s mandate “to make terrorism a crime against the Filipino people, against humanity, and against the law of nations.”

It’s a move that coincides with recent news of a 2016 purchase of spyware by the Philippine government from the British government, causing alarm among human rights groups who believe it could be used to conduct state surveillance on those included in the DOJ’s list.

“There is significant possibility that the said British spyware sold by the UK to the Duterte government will be used, if not being already used illegally, against activists and human rights defenders, whether or not their names are in the said proscription list,” said Palabay.

So while state surveillance may be necessary to keep a country safe, to what extent is it legal?

Aside from the Human Security Act, Philippine law indicates several other instances where it is lawful for the state to conduct surveillance activities.

For instance, the Anti-Wiretapping law and Cybercrime Prevention Act allow authorities with a written court order to record conversation and collect in real-time, traffic data such as the communication device’s location – except its content or identity.

The Bill of Rights itself also says that the privacy of communication is inviolable, unless a court lawfully orders it. According to Arlene Ven of the Commission on Human Rights’ (CHR) legal department, for the court to issue a written order “there must be reasonable grounds or probable cause to conduct surveillance.”

“How do you define security? All of these things are done in secret. Who makes those decisions?”

For many privacy advocates, because “justified” actions are not specified and because the extent to which they are justified isn’t spelled out, state surveillance can be problematic and prone to abuse.

Data privacy lawyer Cecilia Soria asked, “How do you define security? There’s a constitutional provision saying that the privacy of communication is invaluable. When it’s posed like that, the hurdle you have to overcome is great to be able to limit or impair that right.”

She added, “The problem is, all of these things are done in secret. Who makes those decisions?”

Moreover, while state surveillance may be used in the interest of “national security”, JJ Disini, data privacy and information and communications technology (ICT) lawyer, said there is no provision in the law that explicitly justifies its use.

Disini also emphasized that without a written court order, surveillance by authorities would be unlawful. “The government must go to a judge, a court, and ask for permission to engage in surveillance and collect information from individuals. To the extent that this is not done or is rife, or the state actors sidestep this requirement, then the collection is unconstitutional and there must be consequences on those individuals.”

Lack of transparency and clear agenda

Due to its secretive nature, the lack of transparency and checks in intelligence-gathering can also make it difficult to monitor state surveillance.

“It’s very difficult to keep track of even our own government. It’s difficult also to know what exactly our intelligence-gathering agencies are supposed to do. The delineations are not clear,” Jacob said.

Unlike the United States, Jacob said security and intelligence agencies in the Philippines are not “centralized” and their agenda not clearly defined.

“In the US, it’s clear that they have the CIA [Central Intelligence Agency] for foreign intelligence; if local, the FBI [Federal Bureau of Investigation]; and if communication or signal intelligence, the NSA [National Security Agency]. Here we even have plenty of small intelligence offices or agencies in different government offices [whose agenda are unclear].”

Aside from unclear delineations among agencies, intelligence funding also leaves a gap in terms of transparency.

For 2018, the Office of the President is also expected to get a P2.5-billion allocation, which will be equally divided between confidential and intelligence funds. The sum is 5 times more than the combined funds the office received (a total of P500 million) in 2016.

In effect, President Rodrigo Duterte is allowed to spend 84% of the entire amount his predecessor was allowed to spend (P2.98 billion) for his entire 6-year term – an amount that is unprecedented. (READ: Are Duterte’s multi-million-peso intel funds achieving their purpose?)

Critics say this may leave individuals more vulnerable to state monitoring because with more money, the President has more power to spend for surveillance. There is also a lack of checks and balances in spending because of the lack of congressional oversight. (READ: Why intelligence funds require scrutiny)

In addition to this, these confidential and intelligence funds are also difficult to audit because their specific use may not be disclosed to the public.

Meanwhile, the Commission on Audit relies only on what government agencies submit to them. (READ: Confidential, intel funds difficult to audit – ex-COA chair)

Besides the 2016 purchase of spyware to the Philippines government, privacy rights organization Privacy International lists in its Surveillance Industry Index – which monitors transactions and surveillance companies worldwide – at least 7 other purchases of surveillance equipment and software by the government recorded since 2013. Lack of understanding by legal sector

While our rights exist, the lack of understanding by the legal sector of state surveillance and the tools needed to lawfully carry it out translate to a failure in detecting when surveillance is unlawful.

“We have rights but the mechanism to enforce those rights may not be so effective. All this translates to the common lament of many people that we have so many laws but we don’t know how to implement them. Implementing them – part of that means that you have to know what happened first before knowing what penalty to impose or what measure to avail of,” Disini said.

This lack of practice in implementing some of our rights may also, in turn, embolden actors.

He added, “If you can’t prove it, then what good is the law?” – Rappler.com

PART 2: State surveillance as a tool to silence critics