Should we be worried about Con-Com’s draft transitory provisions? 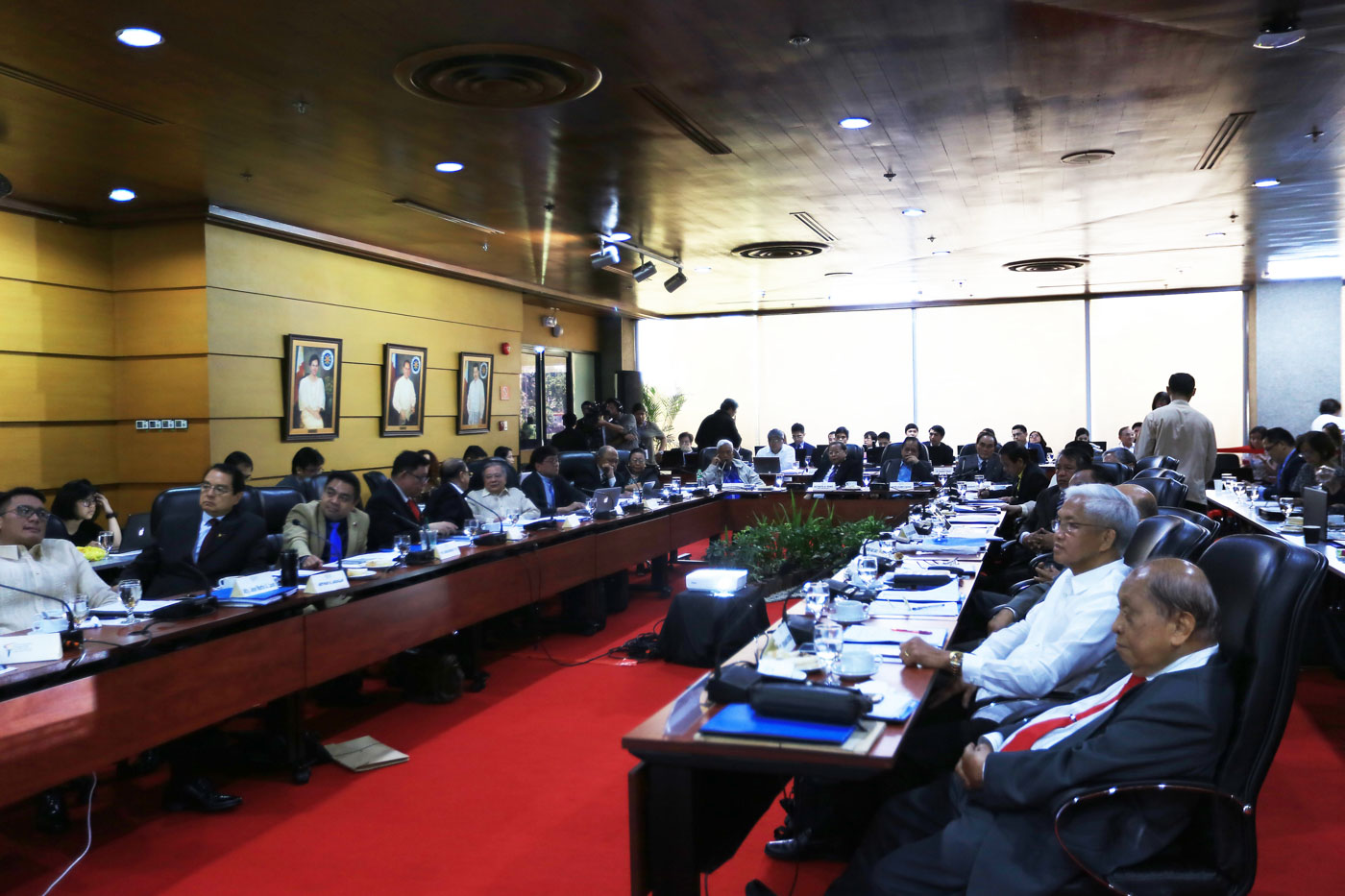 MANILA, Philippines – No less than a member of the Consultative Committee (Con-Com) voiced apprehensions about the transitory provisions in the draft federal constitution to be submitted to President Rodrigo Duterte.

Lawyer Roan Libarios, explaining his vote to approve the draft but with reservations, said on Tuesday, July 3, that the powers given to the proposed Federal Transitory Commission could be “abused” if there are no additional “safeguards.”

“The Transitory Commission is too powerful. I wanted more restrictions to guide its actions. It’s too absolute. I’m worried they will abuse their authority,” Libarios explained to Rappler on Friday, July 6.

The transitory provisions, Article 22 in the draft charter, creates a powerful Federal Transition Commission that crafts the transition plan and sets up all government bodies under the new federal government.

The president, in this case Duterte, will head the commission and pick its 10 members.

Below are the transitory provisions based on the copy of the Con-Com’s June 30 draft federal constitution:

Section 1. (a) For an orderly transition to the new system of government as provided for in the Constitution, there shall be created a Federal Transition Commission which shall convene within five (5) days from the ratification of the Constitution, composed of the following members:

1) The President, who shall be the Federal Transition Commission Chairman;

2) Ten (10) members who are natural-born citizens of the Philippines, at least forty (40) years of age, and with proven probity, integrity, independence, and expertise in the fields of economy, law, fiscal management, governance or development.

The President shall appoint the members of the Federal Transition Commission from the list submitted by the search committee.

(c) The Federal Transition Commission shall promulgate its own rules of procedure within fifteen (15) days from the date it is convened.

(d) The Federal Transition Commission shall have the power to establish its office, appoint and hire its own officials and employees as it may be necessary.

(f) All the living past Presidents may be consulted by the Transition Commission.

(g) The Federal Transition Commission shall complete its mandate by June 30, 2022.

Section 2. The Federal Transition Commission shall have the following powers and duties:

(a) To formulate and adopt a transition plan for the orderly shift to the new system of government as provided for in the Constitution. The transition plan shall be published in the Official Gazette and in at least two (2) newspapers of general circulation, and any digital platform chosen by the Transition Commission;

(b) For the proper execution of the transition plan, it shall promulgate the necessary rules, regulations, orders, decrees, proclamations, and other issuances, do all acts to implement the same, and resolve all issues and disputes that may arise therefrom;

(c) To organize, reorganize and fully establish the Federal Government and the governments of the Federated Regions, in accordance with the Constitution;

(d) To exercise all powers necessary and proper to ensure a smooth, speedy and successful transition.

Section 3. The transition plan shall include the following:

a) The respective transition plans for the different branches of the Federal Government, the independent Constitutional Bodies, the Federated Regions and other component units;

b) The fiscal management and administration plan including, but not limited to, generation of revenue and resources and their appropriation, allocation, and expenditure;

c) The establishment of mechanisms for people’s participation in the transition.

Section 4. The Federal Transition Commission shall ensure people’s participation by involving faith-based, civil society, indigenous peoples, sectoral, non-government and other community based organizations in the transition, especially in the selection and screening of appointees to the new government.

Section 6. The term of the President and Vice President, which shall end on June 30, 2022, shall not be extended.

Section 7. All laws, decrees, executive orders, proclamations, niles, regulations, letters of instructions, and other executive and judicial issuances not inconsistent with this Federal Constitution shall remain valid until amended or repealed.

Section 8. All officials of the government under the 1987 Constitution shall continue to hold their office and exercise their respective powers and duties under such terms and conditions as may be provided in the transition plan.

Section 9. Permanent employees of the government separated from service as a result of the reorganization of government shall be entitled to separation pay, early retirement pay or retirement pay, or other appropriate benefits according to them under existing laws. In lieu thereof, at the option of the employees, they may be considered for employment in the Federal Government, the Regional Government or in any of its subdivisions, instrumentalities, or agencies, including government-owned or controlled corporations and their subsidiaries in accordance with the existing civil service laws, the corporate charters of these corporations, and other relevant statutes.

Section 10. All properties, records, equipment, buildings, facilities, and other assets of any office or body abolished or reorganized under the Constitution shall be transferred to the office or body to which its powers, functions, and responsibilities substantially pertain.

The proposed provisions will put Duterte at the helm of a powerful body tasked with overhauling, or in the words of another Con-Com member Julio Teehankee, “rebooting” the government.

The transition commission has the power to “organize, reorganize, and fully establish” all branches of the Federal Government and governments of the Federated Regions, plus the independent constitutional bodies.

It can “promulgate the necessary rules, regulations, orders, decrees, proclamations, and other issuances” to implement its transition plan. It has the power to resolve all issues and disputes that arise.

To ensure a successful transition, the commission is mandated to “exercise all powers necessary and proper.”

But Libarios is particularly worried about Section 8 which states that while government officials would retain their positions and powers during the transition, these will be subject to “terms and conditions as may be provided in the transition plan.”

This phrase could have the effect of empowering the commission to declare all positions in government vacant, including those in the judiciary, legislature, and constitutional commissions, said Libarios.

As a check on the powers of the Transitory Commission, Libarios wants a provision guaranteeing that the security of tenure and terms of government officials will be respected and that only positions “incompatible with a federal government” will be affected.

“The only officials who will be affected are those with positions incompatible in a federal shift; otherwise, they should continue holding their office,” said Libarios.

There are other interesting details in the transitory provisions worth looking at.

The Con-Com sought to ensure the involvement of civil society groups, faith-based groups, and other sectors in the transition plan but left the creation of a mechanism for their participation to the Transition Commission.

Another provision intended to be a safeguard is the deadline set for the commission.

“The Federal Transition Commission shall complete its mandate by June 30, 2022,” reads item G under Section 1.

But what happens if the commission is unable to finish implementing its transition plan by then? Who will compel them to wrap things up on time?

The Con-Com’s proposed constitution is still a long way away from being ratified. Duterte still needs to decide if he’ll endorse it to Congress in its current form, or order revisions.

Even if Duterte endorses it to the legislature, lawmakers can ignore the draft in its entirety, because it is merely recommendatory in nature.

However, Congress, especially the House of Representatives, is dominated by Duterte’s allies for whom a Duterte-approved draft constitution would hold some weight. – Rappler.com