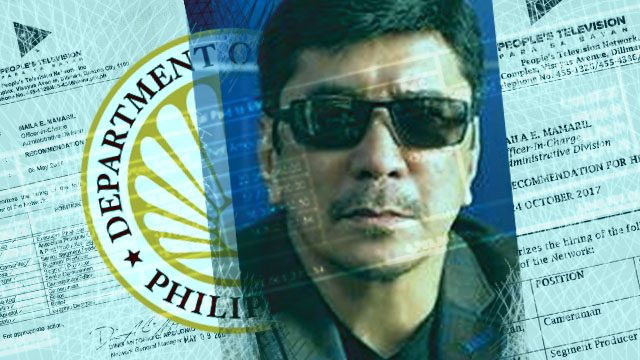 MANILA, Philippines – The Commission on Audit (COA) said the crime of graft may have been committed in a contract that gives Ben Tulfo’s Bitag Media P89.878 million or a 75% cut of the total airing cost that the Department of Tourism (DOT) would pay the People’s Television Network (PTV) for airing tourism segments.

“There is a possible conflict of interest which may be a violation of Section 3(e) of the Anti-Graft and Corrupt Practices Act,” said COA in its 2017 audit report of the DOT.

State auditors explained that the offense may fall within the prohibition of “causing any undue injury to any party, including the Government, or giving any private party any unwarranted benefits, advantage or preference in the discharge of his official administrative or judicial functions through manifest partiality, evident bad faith or gross inexcusable negligence.”

The conflict of interest is that the DOT secretary at the time, Wanda Teo, is Tulfo’s sister.

This is the first time that a government body is explicitly citing conflict of interest in the advertisement deal, although Ombudsman Conchita Carpio Morales has launched a motu propio investigation, or an investigation initiated without a need for a complaint.

Just how much was Tulfo paid for the deal?

COA’s 2017 audit report on the DOT said the total contract cost to air tourism segments on PTV programs was P120 million, but that 75% or P89.878 million would be paid to Kilos Pronto, a show owned by Tulfo’s Bitag.

A summary obtained by Rappler from PTV through Freedom of Information (FOI) request shows that as of May 24, 2018, a total net amount of P71.061 million has been paid to Bitag in 4 tranches. State auditors said they couldn’t verify whether the contract was fulfilled because of the lack of documents submitted to them by the DOT.

“We noted several inconsistencies on the number of times the DOT TVC, segment and programs aired, indicating the PTV’s non-compliance with the Memorandum of Agreement,” COA said.

COA said the number of segments aired were lesser than what was agreed upon.

There is also the question of whether the project was bidded out to Bitag, and one of the recommendations of COA to DOT is make sure that all their procurements undergo the usual bidding process in compliance with procurement law.

Rappler earlier reported that Bitag also produces the DOT show I Travel Pinas, which is a standalone show that airs Sundays on PTV.

We sent inquiries to PTV whether I Travel Pinas is the same as the tourism segments which have been earlier flagged by COA in its PTV audit.

We did not receive any direct response from PTV.

However, the DOT audit reveals that I Travel Pinas is indeed the name of the standalone show, and the segments and placements detailed in the DOT-PTV-Bitag deal.

The question now is, if Bitag was paid for airing costs of the segment, how much was it paid for production costs?

COA’s analysis shows that the remaining 25% of the airing cost not paid to Bitag are:

Who produced the program and the spot placements? Letters previously shown to ABS-CBN by Teo’s lawyer Ferdinand Topacio suggest that one outfit would produce everything.

PTV would produce the tourism program, segments, and spot placements, and they all would air on PTV Network. How much was the deal? P120 million, according to Topacio – same as the total cost audited by COA.

The letter reveals that the PTV offered the production services of its “production outfit who is capable and ready to produce weekly tourism programs.”

Although the PTV has an in-house production, hiring memoranda obtained through FOI requests show that PTV hired 14 production staff for I Travel Pinas. Bitag’s own social media postings indicate that they produce I Travel Pinas. In the heat of the issue over the Bitag deal, PTV anchor Jules Guiang wrote on Twitter: “It will always be frustrating that some people made our network their milking cow for their blocktimers while our in-house shows struggle to get funding so we can somehow be at par with the mainstream shows.”

It will always be frustrating that some people made our network their milking cow for their blocktimers while our in-house shows struggle to get funding so we can somehow be at par with the mainstream shows.

Bitag is a blocktimer.

Questions remain on how much Tulfo’s Bitag earned from the entire thing, but, officially, the production company has received P71 million.

They had promised to return the initial P60 million, but has not done so. – Rappler.com