The Philippine economy’s health under Duterte Facebook Twitter Copy URL
Copied
President Rodrigo Duterte spits curses and blasphemes, yet the economy remains rosy. The question is, how much noise can businesses take?

MANILA, Philippines – We have never seen or heard of a president like Rodrigo Duterte. One may think that we have seen his worst, yet he continues to surprise and raise it a notch higher each time.

We thought that cursing priests was the worst. He went on to call God stupid. We thought we’ve gotten used to his sexist remarks. He went on to seal that with a kiss. The list goes on and journalists have even more to write about and the public to spectate at the sidelines.

Yet despite all his ramblings, it seems that the economy can shrug these off.

“The economy is in the doldrums,” he said. Most of the trends and numbers say otherwise.

Is life better because of his crass leadership style? The jury’s still out on the economy.

How much political noise can businesses and investors take? Signs of distress are definitely on the horizon.

The Philippine economy is far from being sick.

As of the first quarter of 2018, the country’s gross domestic product (GDP) stood at 6.8%. This is one of the fastest growth rates in the Asia-Pacific.

But UP economics professor Emmanuel de Dios said that economic managers should not rejoice so quickly, as this is still short of the government’s target range of 7% to 8%.

Moreover, other countries like Laos and Cambodia had already breached 7% years ago. During the first quarter of 2018, the public sector’s construction activities grew by 25%. Private sector construction also grew at 7%.

According to the National Economic and Development Authority (NEDA), the government has maintained its spending targets for infrastructure development.

Economic managers committed to accelerate public infrastructure spending from 5.1% of the country’s GDP in 2016 to 5.4% in 2017, with an increase in funding allocation of P101.76 billion based on the General Appropriations Act (GAA).

The government has slightly raised the country’s deficit ceiling to sustain the BBB’s momentum.

However, securing the rest of the funds for the P8-trillion infrastructure push continues to be a challenge. Duterte has also revamped the country’s tax reform plan for the infrastructure push.

The Tax Reform for Acceleration and Inclusion (TRAIN) law boosted government revenues by 19% in the first 5 months of 2018.

The government also ran after tax evaders like Mighty Corporation. Duterte was able to rake in over P40 billion from the cigarette maker. 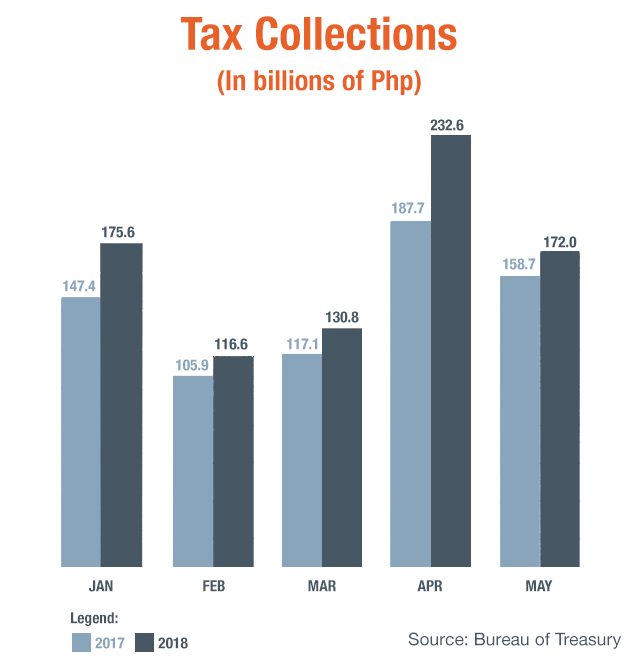 The amount of foreign direct investments (FDIs) flowing into the country also surged to $8.7 billion during the first 11 months of 2017, surpassing the full-year target of $8 billion set by the Bangko Sentral ng Pilipinas (BSP). The highest recorded so far under the Duterte administration was seen in October 2017, where FDIs soared to $1.92 billion. While the economy is clearly not in the doldrums, it does not mean that it will never be.

Other indicators show that the poor is taking a whipping from the elevated prices of goods. Inflation started to rise in 2018 due to the implementation of the TRAIN law, higher oil prices in the global market, and the shortage of cheap rice in the market.

Inflation in June soared to 5.2%, blowing market expectations and the government’s estimates.

Despite inflation accelerating, economic managers remain firm that the TRAIN law should not be stopped. Budget Secretary Benjamin Diokno even said that “we should be less of a crybaby“.

Meanwhile, analysts seem to be unanimous in saying that the BSP was indeed behind the curve in raising interest rates. Some even called the central bank’s move to cut the Reserve Requirement Ratio (RRR) of banks to 19% from 20% as “confusing”. So far, FDI figures remain strong, but the pledges for more have clearly slumped.

Total foreign investment pledges during the 1st quarter of 2018 fell sharply by 37.9% compared to the same period last year.

Looking at the pledges figures is important, as it provides a snapshot of just about how much FDIs the government will expect in the coming years. The peso also took a hard hit in 2018 and fell to a 12-year low. Some firms have even forecasted it to sink further to P54 to a dollar.

“We do not want a strong peso, we want a competitive peso,” Diokno said.

While economic managers and some analysts insisted that this is a win for an economy supported by Overseas Filipino Workers (OFWs), the elevated prices of goods here seem to cancel out the perks.

Moreover, the weakness of the peso has led overseas investors to pull out $1.22 billion of equities so far this year, exceeding the combined inflows in 2016 and 2017.

Foreign investors have withdrawn over $613 million since Duterte ascended to the presidency in 2016. The Philippines’ ranking in the ease of doing business slipped to 113th in 2018 from 99th last year across the 190 countries, according to a study by the World Bank.

The figures are worse when we look at some of the sub-indicators. The Philippines ranked 173rd in starting a business, 101st in dealing with construction permits, 114th in registering property, 142nd in getting credit, 146th in protecting minority investors, and 149th in enforcing contracts.

Economic managers insisted that despite the dip, the country actually improved its processes and has provided a better environment for businesses. Indeed, but most of our Asian neighbors have climbed up the ladder. It is competition after all.

In competitiveness, the Philippines continues its streak in failing to dazzle.

The Philippines plummeted 9 notches to 50th spot out of 63 economies in this year’s World Competitiveness Yearbook (WCY) rankings of the International Institute of Management Development (IMD).

This is the country’s largest year-on-year decline over the last decade and the sharpest drop among peers in the Asia Pacific. From 2014 until last year, the Philippines’ ranking fluctuated to the low 40s.

The Department of Finance (DOF) has already slammed the criteria for judging of IMD in an economic bulletin.

The DOF called the IMD study “the worst study ever made on competitiveness,” yet the the best minds in economics and governance in the world continue to anticipate its results. The business community has kept its earphones on and has distanced itself from all the political noise and Duterte’s foul mouth.

But until when can the economic realm shield itself from the political?

If Philippine society were a game of chess, politicians could be horses. Trojan horses, to be more precise.

Duterte and his allies are now pushing for charter change and federalism, despite majority of Filipinos opposing the move. Politicians seem to be turning a blind eye and even insist that there is public clamor for the radical reorganization of government structure.

Filipinos may need to cash out as much as P74 billion for a move they never asked for.

At least two economic managers have already expressed their concerns about it. Socioeconomic Planning Secretary Ernesto Pernia warned federalism would “wreak havoc” on the economy. Finance Chief Carlos Dominguez feared that it “has the potential to become a nightmare.”

Should the business community continue to shrug off the tough talk? Or is it time for them to come out from their timid shells and finally treat talk as action? – Rappler.com