Anarchy of billboards in Metro Manila

MANILA, Philippines – It’s a billboard war on EDSA, with images and messages competing daily for the attention of commuters on the busy highway.

Name it, it’s there – fashionable clothes, men and women with sleek hairstyles and the brightest smiles, even Instagram-worthy food. And there’s beer to boot. But the LED billboards are the flashiest of all, threatening to outshine the competition with literally the brightest of lights.

The dazzling lights could be blinding and hazardous to drivers on EDSA, but regulators appear oblivious. It’s not even clear who has the power to enforce laws, or worse, if there are laws that regulate such hazards.

Johnson Domingo, Department of Public Works and Highways (DPWH) National Capital Region (NCR) unified project management office director, admitted that the department has yet to come out with guidelines for electronic billboards.

He attributed the lack of detailed guidelines to the messy management history of billboards. 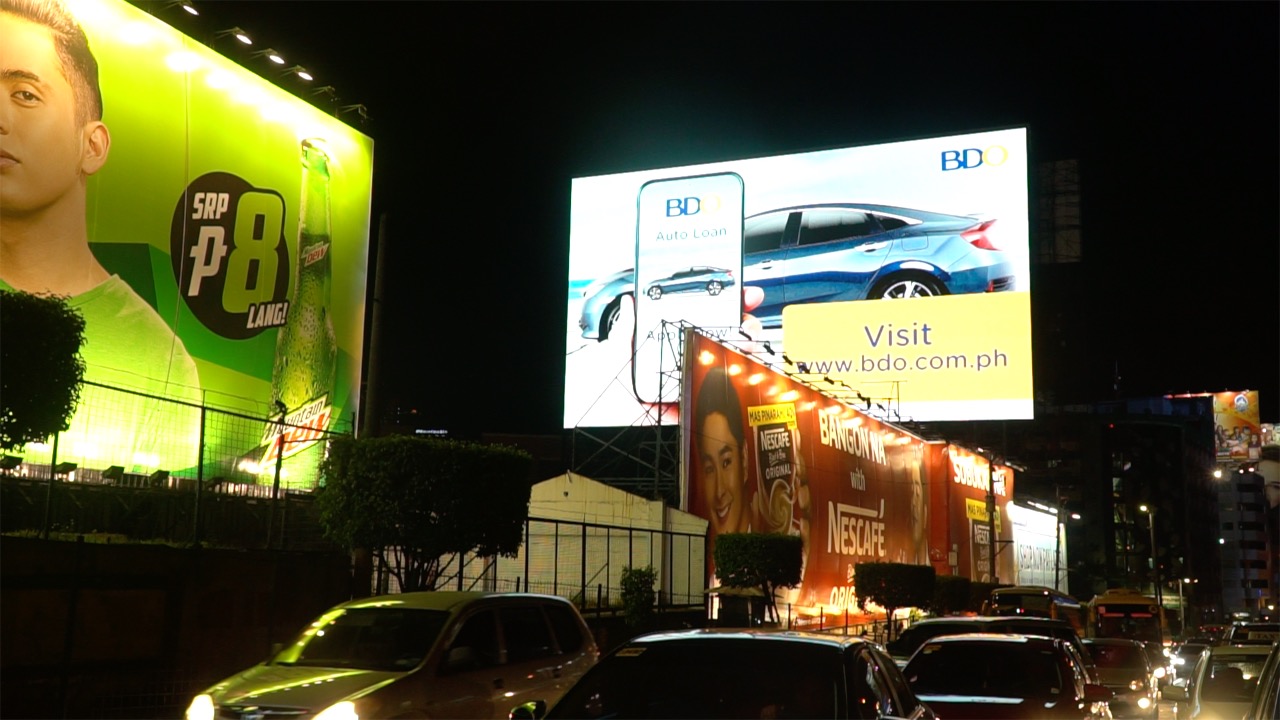 Regulating billboards – both regular and electronic – used to be the domain of the Metropolitan Manila Development Authority (MMDA) but in 2017, the shift to DPWH happened.

The DPWH’s jurisdiction is, however, limited only to the structural integrity of billboards, with content regulation left to advertisers themselves. For Domingo, this could be an issue since he wants to restrict certain colors and reduce the brightness of billboards.

For instance, he said in Filipino: “The brightness of the LED billboards should be considered. it has to be controlled because it is dangerous.”

The other consideration, Domingo said, is durability of LED billboards. He said the screens must be able to withstand strong wind and rain. Just recently, a LED billboard inside Camp Crame was blown over by strong wind whipped up by a landing military helicopter.

Domingo said the DPWH has yet to convene stakeholders and experts to draw up rules. But common sense can already dictate on some of the regulatory safety standards. 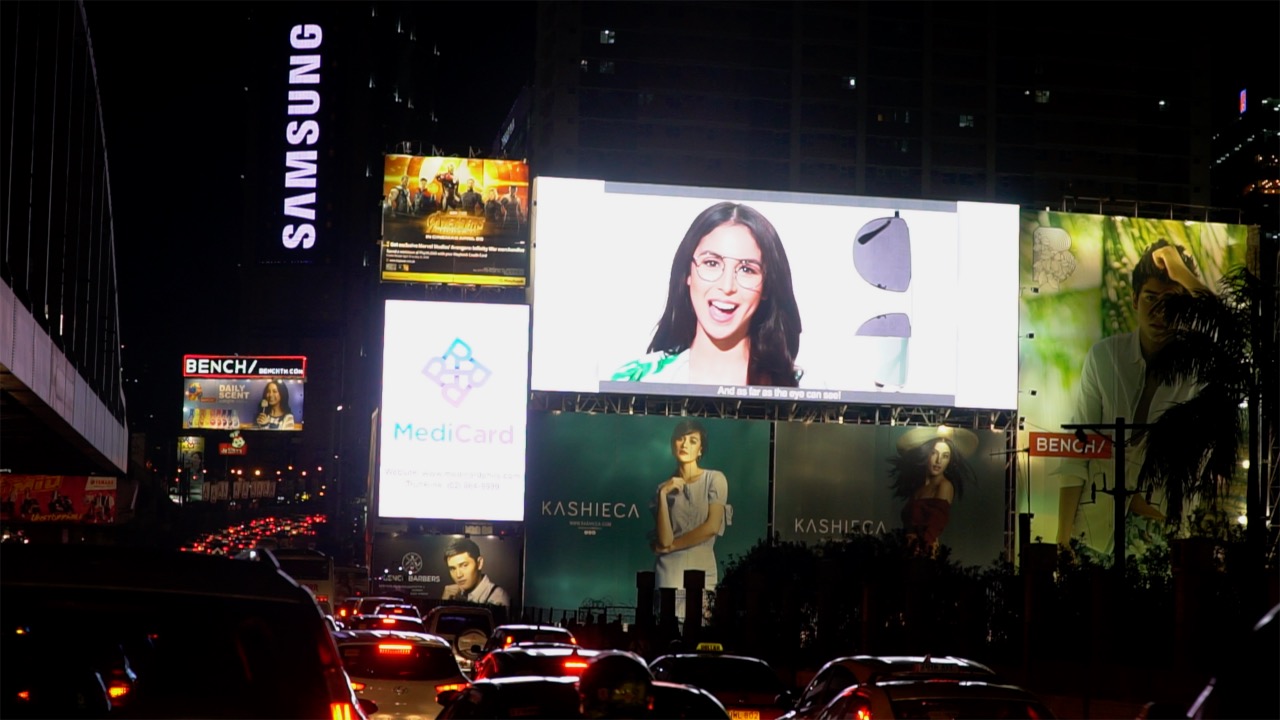 Accident data from the MMDA, which used to have jurisdiction over billboards, contained no information on whether accidents did occur because of the glaring lights of electronic billboards. Data only indicated generic tabs such as driver negligence, faulty car parts, or distracted driving as causes of accidents.

However, anecdotal evidence suggest that some drivers have indeed gotten into minor accidents due to the glaring lights.

An MMDA traffic enforcer who requested anonymity said that he encountered several drivers blaming the lights from electronic billboards as among the reasons for minor accidents.

While there is no solid data that directly links the flashing lights of electronic billboards to road crashes, some groups and legislators in the past have called for more regulation.

A study published in the journal of the UP College of Architecture focused on a portion of EDSA along Guadalupe from the Pasig River to Estrella street.

It concluded that advertisers tend to erect billboards in this part of EDSA since vehicles tended to move slowly in that area. Moreover, this portion of EDSA curves so that drivers coming from a straight path had a better view of the billboards while driving.

The same area where the study was conducted was, however, also the portion where a cab driver was crushed and killed by a billboard in 2006 at the height of typhoon Milenyo.

Another incident happened in 2008 where 4 people were injured because of a toppled billboard in the same area.

The incidents prompted the late senator Miriam Defensor-Santiago to file an anti-billboard bill, but the proposal did not even make it to the plenary in Congress.

In an interview with GMA News in 2008, Santiago suspected that “lobby money” was involved in blocking the bill.

“These illegal billboards have killed innocent people over several years. Under the police power of the state, they could even be banned outright. Corporate greed is driving these billboards, because the law is too liberal. Radical problems need radical solutions,” Santiago said.

Former MMDA chairman Francis Tolentino even went on to propose the complete eradication of billboards on EDSA. In an interview with ABS-CBN in 2011, Tolentino said EDSA, which is a historical venue of political upheavals, should be billboard-free.

He cited the National Building Code which states that heritage sites should be free from billboards. He said EDSA as a venue of political upheavals and billboards “should not be there in the first place.” 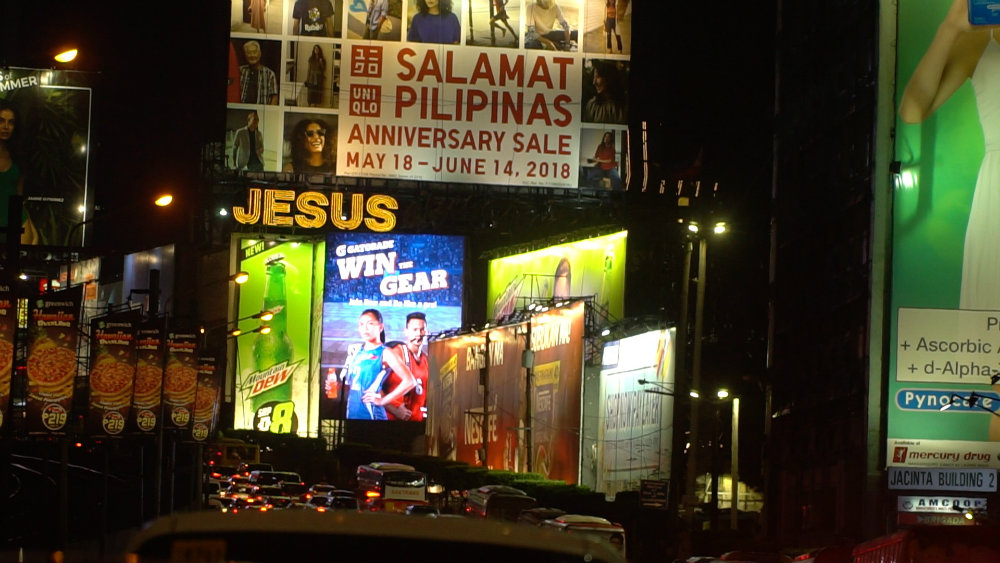 Adding to the complications are the different rules and standards applied by the 16 cities and one municipality of Metro Manila. Every city in Metro Manila has its own building official who sets the rules based on the standards set by the national building code.

For instance, Quezon City limits the size of billboards to only 100 square meters while Mandaluyong City adheres to the national building code’s size limit of 225 square meters.

As for spacing, both Quezon City and Mandaluyong City specify that billboards should at least be 100 meters away from each other.

Makati City, for its part, limits sizes according to the width of the road where the billboard will be put up. Billboards are only allowed to be as big as 162 square meters if placed along roads more than 45 meters wide.

Makati City is also more specific about distance between billboards. They must be 150 meters apart if located in roads 45 meters wide. For roads that are between 20 to 45 meters in width, spacing must be at least 100 meters. Billboards must maintain a 50-meter distance if they are located along roads that expand to only 20 meters.

Makati is also so far, the only city that has specified the maximum size of electronic billboards at 162.5 square meters. Yet a source in the city government admitted that there are billboards that surpass this limit.

Makati City is perhaps the most peculiar because it has the most number of billboards, according to Lloyd Tronco, executive director of the Philippines Center for Out-of-Home Media Research and Science. Officials are, however, unable to cite specific numbers. 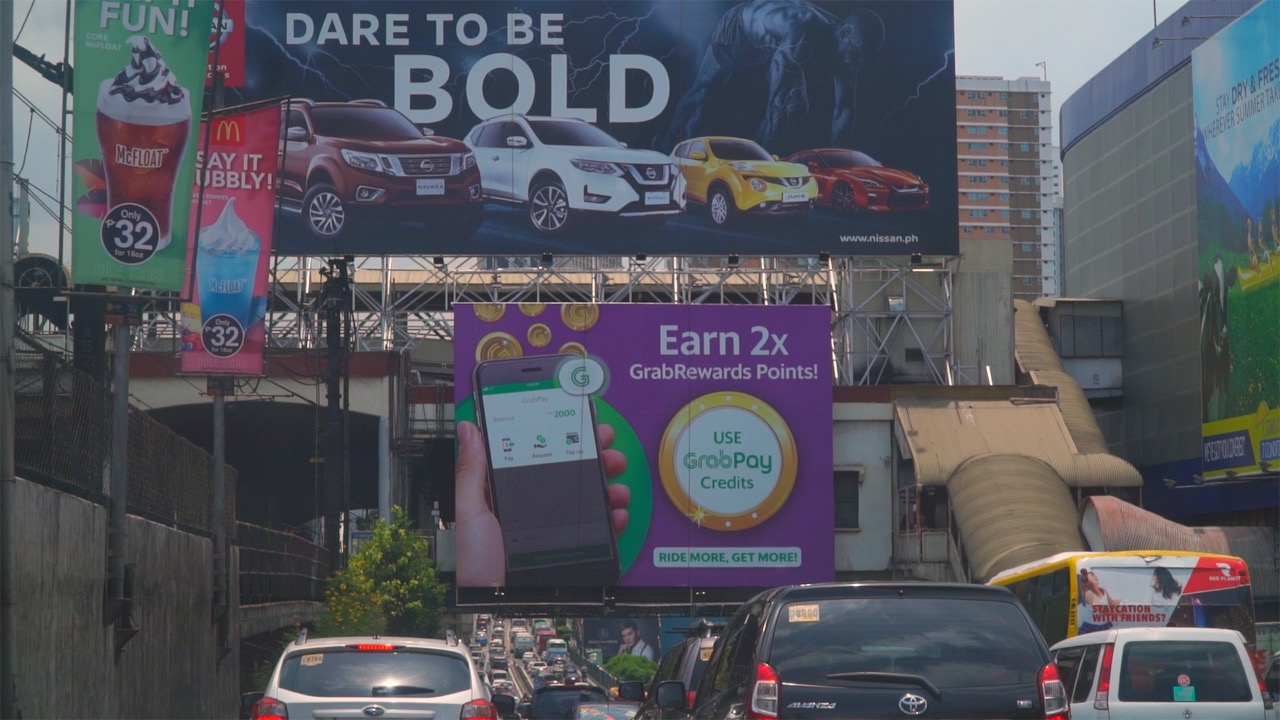 Because of this, Makati has declared a moratorium on new billboards since 2004.

Maribert Pagente, head of the city’s billboards and signages task force, said: “No billboards have been issued a permit since 2004. Any new one is illegal.”

He admitted that “he does not know” why there are new billboards sprouting like mushrooms in the city. Pagente added they “try to be lenient” to billboard owners whenever they exceed the billboard size limits and allow them to take down their billboards on their own once they are called out.

The tricky problem begins when new billboards are erected.

(We do not know who owns the billboards. Who will we write to? What we do is we look at the billboard if there is a company name on it or find who the land owner is and ask who is leasing the property.)

Pagente maintained that all prominent electronic billboards in Makati had been approved before 2004. He also said the task force checks them if they are still sturdy.

He urged the DPWH to come out with a clear set of guidelines. He admitted that some electronic billboards are just “too glaring.” 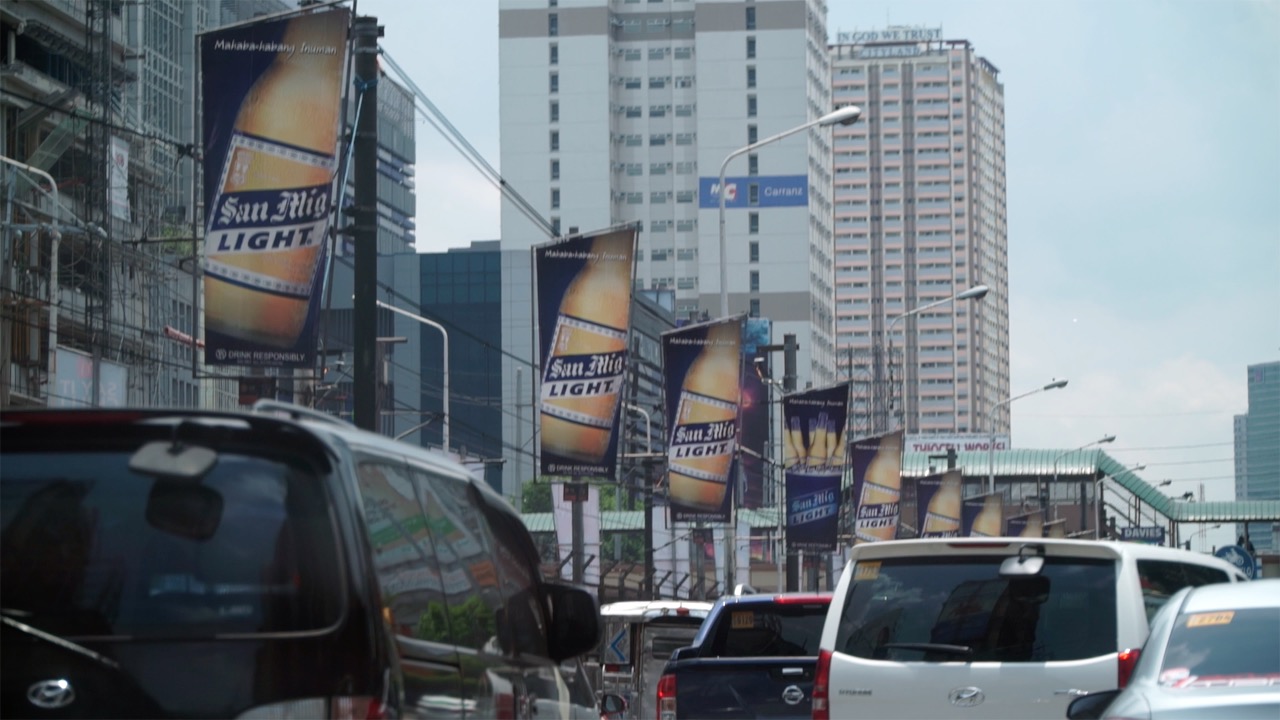 While electronic billboards are loosely regulated, regular billboards have clear guidelines. The DPWH made sure to avoid the recurrence of accidents and messy management of the past.

The department has strengthened rules and regulations set by the national building code.

For instance, the DPWH has specified that all billboards must have necessary support and have pulleys for them to be easily lowered once the Philippine Atmospheric, Geophysical, and Astronomical Administration (PAGASA) raises storm signal No. 2 in the area.

The DPWH also requires a setback of 5 meters at the front and two meters at the sides and rear of billboards. Size must not exceed 225 square meters and billboards must be at least 100 meters apart.

Moreover, billboard owners and advertisers are required to submit an annual insurance coverage policy of P100,000.

Domingo said that all these and several other requirements must be submitted to the city’s building official to secure a go-signal from the DPWH.

Why have billboards continued to proliferate? Simple. They rake in millions.

Tronco explained that billboards have long been in business and are the oldest form of advertising.

Tronco and Domingo both agreed that the total eradication of billboards will cost thousands of jobs.

Creating one billboard alone needs a whole creative team to conceptualize content – graphic artists to execute the concept, models, make-up artists, producers, lightsmen, assistants, drivers, printers, and so on and so forth.

Tronco said content of billboards are governed by the Ad Standards Council (ASC). The council has a long list of rules which are based on existing laws like the consumer protection act, the ASEAN handbook for cosmetic products, and even the milk code.

Tronco added that history has taught advertisers to be very mindful of how much skin is exposed on billboards.

“Back then there were really provocative billboards, but there was also a backlash and that’s bad publicity…. Nothing too distracting now,” Tronco said.

Controversy is the least that advertisers want to be associated with. 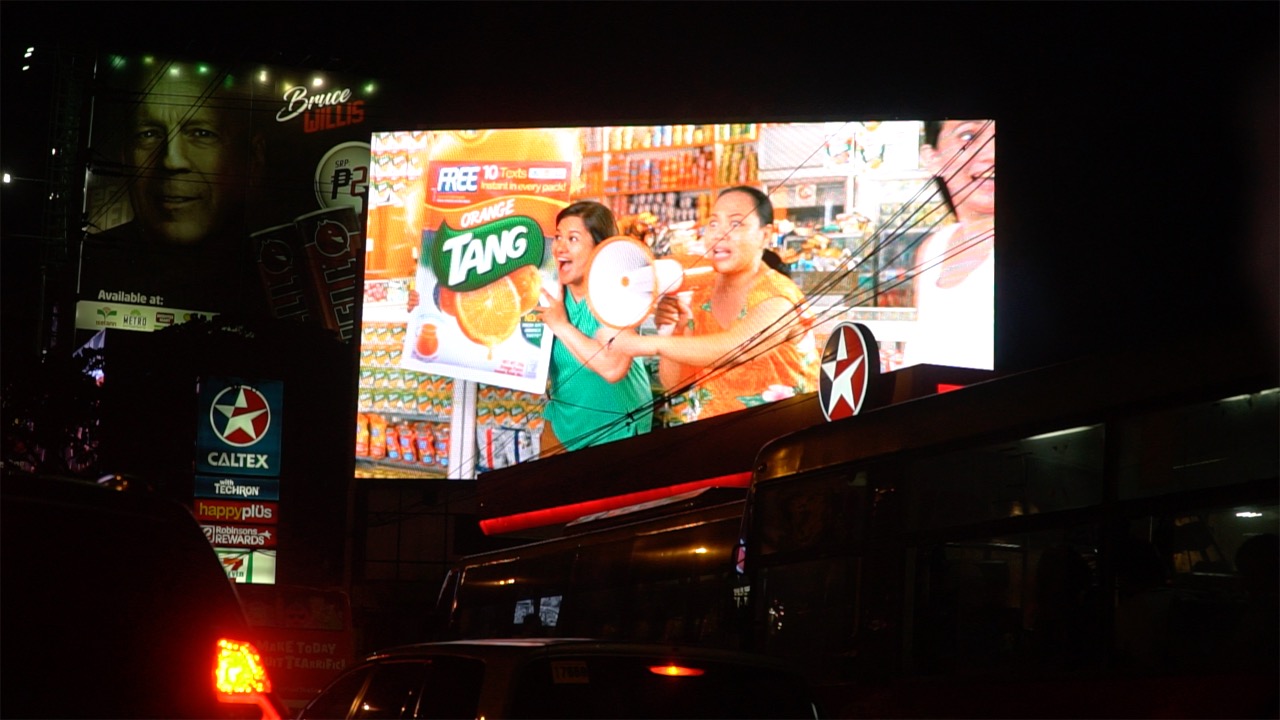 So are electronic billboards worth it?

Tronco said: “There are a lot of LEDs right now that’s coming out but it doesn’t necessarily mean that LED is the best. Some brands, just because it’s a LED, it looks like a TV. So they stick in a TV commercial. [But] it’s not necessarily that way.”

He also said that billboards are an effective way to kick off product campaigns.

Moreover, he advised companies to think very carefully about using electronic billboards since they are more expensive than regular billboards.

“Bigger is not necessarily better. Some products or executions are better with smaller billboards like what we see on some train stations; others are better inside establishments or in malls,” he said. 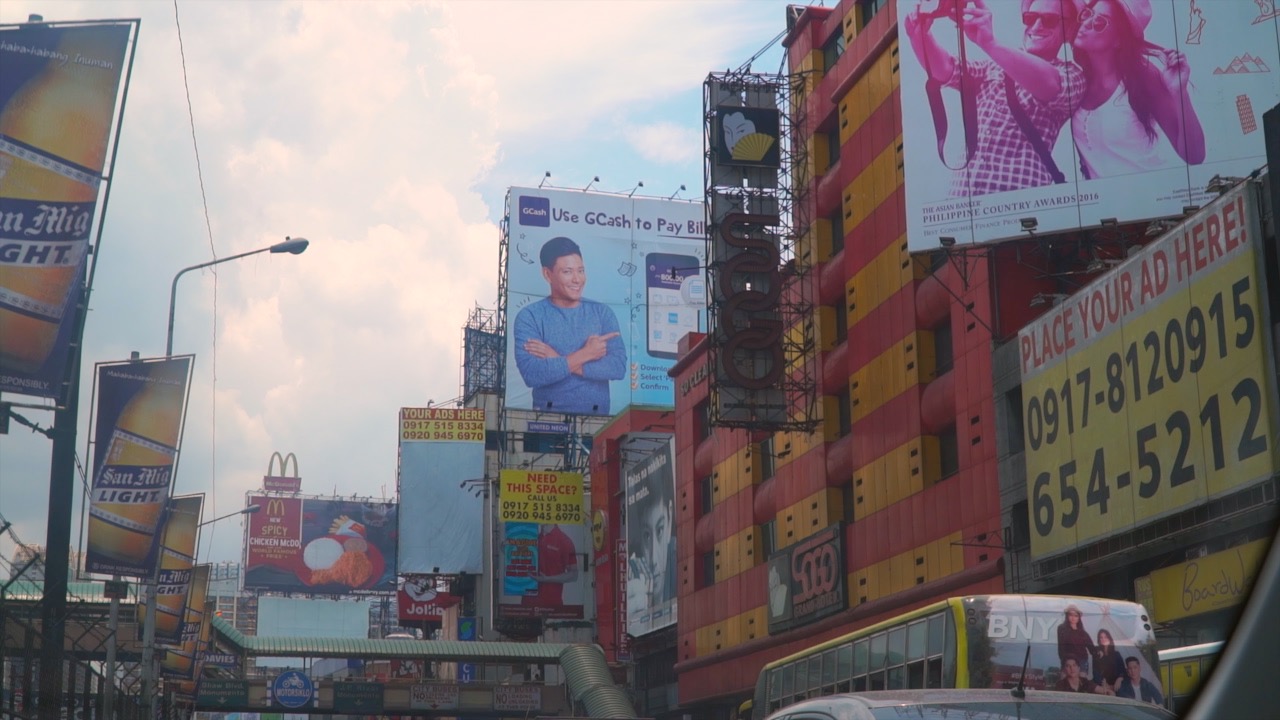 “Instead of total elimination of billboards, perhaps we can instead identify specific places where they are allowed, where content is better curated… and they’re designed and built with consideration of the streets, the buildings and the people using them. Perhaps if we had more beautiful buildings and more greenery in our cities, those involved wouldn’t feel the need to cover them up,” Palafox added.

Billboards are definitely not going away, but Palafox said local governments must not crowd cities with “symbols of consumerism.”

“In London, for several decades outdoor signages have not been allowed along the Thames River to maintain the character and cityscape. While there are commercial signages in trains and train stations, the content, size and materials are well-curated and regulated,” Palafox said.

The architect is also pushing for cities to have designated areas for billboards like Times Square in New York or Picadilly Circus in London.

In the savage world of business, one must be able to pitch to customers within seconds or at a glance. Billboards have proven to be such a strong force, that even government can’t put a leash on this advertising beast.

The DPWH indeed has a very daunting task ahead: finding the right balance between business, visual pollution, and public safety. – Rappler.com