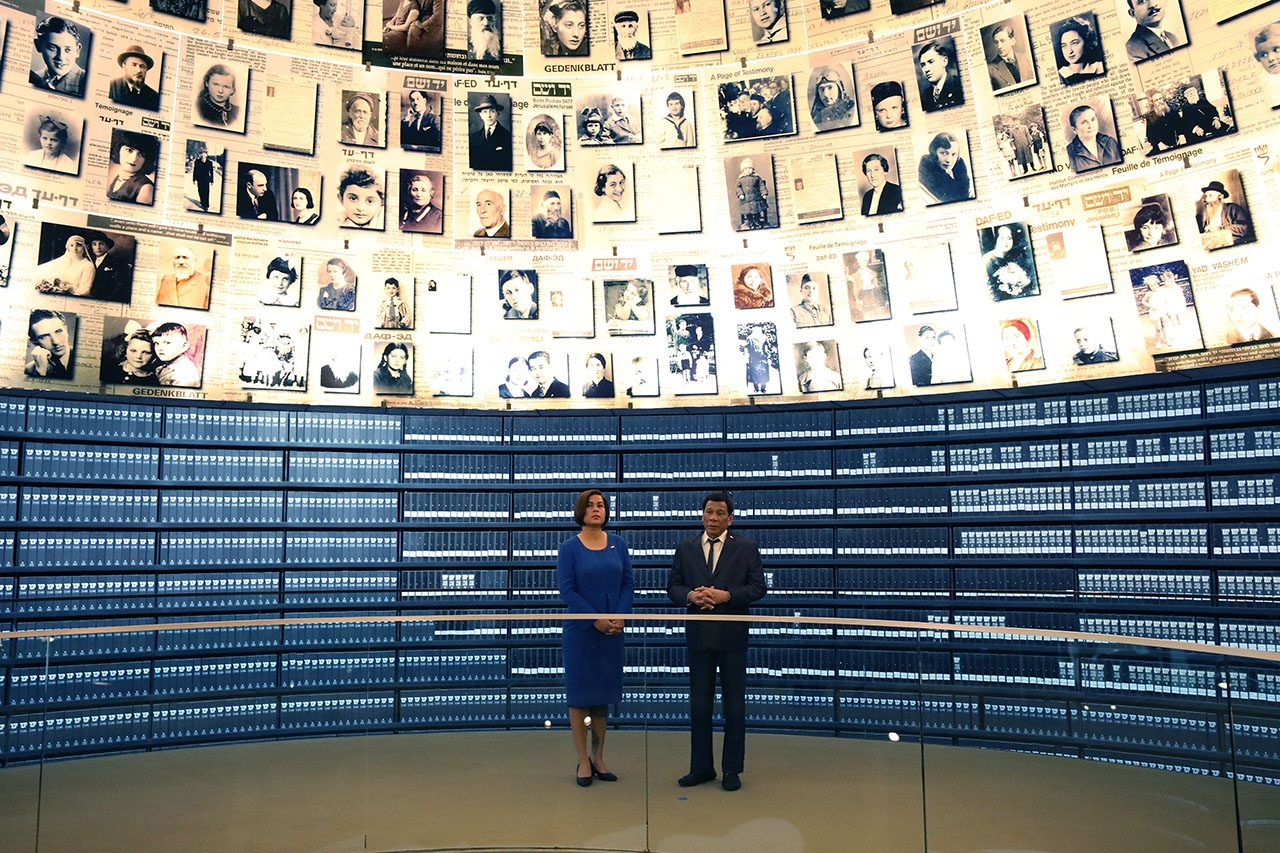 MANILA, Philippines – A self-proclaimed mass murderer laying a wreath at a Holocaust memorial. A man who called God “stupid” setting foot on the Holy Land.

These were just some of the ironies not lost on Israeli media reporting on President Rodrigo Duterte’s Israel visit.

Such media coverage indicate that the ghost of Duterte’s past controversial remarks haunted his historic trip, proving their real diplomatic consequences.

Even before the Israeli government rolled out the red carpet for his arrival at the Ben Gurion International Airport, local media already roasted the Philippine president for comparing himself to Nazi leader Adolf Hitler in 2016.

Branded a “Hitler admirer” who dared show his face in a predominantly Jewish country, Duterte was dismissed as an “unwanted guest” who deserved “no place” in Israel. This, despite a public apology in 2016 for his remarks that appeared well-received by the Jewish community in Manila.

Sure, Duterte had ruffled foreign feathers on other trips abroad – in China, where he chewed gum during a ceremony with Chinese President Xi Jinping; in Cambodia where his rolled-up sleeves and open collar in the presence of their King miffed locals; in Japan where he kept top officials waiting.

But Israel was something else, and no wonder. Whereas the other gaffes were merely protocol-related, Duterte’s very presence in Israel touched a deep reservoir of memories and sensitivities of the people there.

Aside from his Hitler remark, Israelis had heard of his intention to buy weapons from their government. But Duterte’s bloody drug war makes this a gruesome prospect for Israelis already concerned with how their government is providing arms to controversial regimes.

Coupled with Duterte’s penchant for sexist jokes and statements against God and the Bible, it’s no surprise that a lawmaker admitted Israelis may need “a pill against nausea” to stomach Duterte’s presence.

Hours after his arrival, Duterte did not disappoint. In a speech in front of Israel-based Filipinos, Duterte defended his recent rape joke and apologized to former American president Barack Obama for calling him a “son of a bitch.” The next day, this was all the Israeli newspapers could talk about.

Knowing the kind of news Duterte’s presence generated, was Malacañang prepared for a possible diplomatic disaster?

They took pains. Duterte was reminded – twice – in his first speech in Israel not to curse or make any untoward statements.

Then there was the decision to bring his daughter Sara Duterte Carpio along. The Davao City mayor is not only the President’s favorite child, but the child of a descendant of a Jewish American – Duterte’s first wife Elizabeth Zimmerman.

Duterte took every opportunity to mention this detail during his official events.

“I have my daughter here who is a Zimmerman,” he told Prime Minister Benjamin Netanyahu on Monday, September 3.

“Actually she is a descendant of the Jews, who went to the Philippines and who settled down there many, many years ago during the time of the Holocaust,” he continued.

Duterte kept Sara by his side as he was given a tour of Yad Vashem, the solemn memorial to victims of the Holocaust.

Surrounded by the names of the 6 million Jews killed in Hitler’s purge, Duterte gestured to Sara: “She is a descendant of a Jew in the Philippines, probably came there to seek the sanctuary.”

In that situation, it was impossible for Duterte not to refer to the Holocaust or Hitler. Surrounded by Israeli officials and media, Duterte called the Nazi leader “insane” and the genocide he perpetrated “unfathomable.”

Father and daughter laid wreaths at the Hall of Remembrance.

Everything from the itinerary to the speeches was designed to highlight other bright lights in Philippines-Israel relations.

Duterte, Netanyahu, and Rivlin mentioned the late Philippine president Manuel Quezon’s “open door” policy when he allowed 1,300 Jews sanctuary in the Philippines at a time when other countries shut their doors.

For Duterte’s last day in Israel, he was set to visit a monument to Quezon’s good will, accompanied by two Holocaust survivors who sought refuge in the Philippines.

Duterte even brought along Bert Romulo, a descendant of Carlos Romulo, the late Philippine representative to the United Nations who voted in favor of recognizing Israel’s independence.

Malacañang and the foreign affairs department likely wanted to draw attention to these positive aspects, and away from Duterte’s past controversial statements.

But he could not escape his 2016 Hitler remark. Israeli and Philippine media zoned in on his written message of “never again” to Hitler and the Holocaust, and Rivlin’s “reminder” to Duterte that the Nazi leader was “the devil on earth.” An Israeli businessman boycotted a forum with Duterte.

In response to such strong sentiments from some Israelis, Presidential Spokesman Harry Roque could only say these were “truly regrettable” but that Malacañang respects the right to free speech.

But asked by Rappler on their last day in Israel about the negative sentiment from some quarters in Israel society, Roque denied feeling any anger.

“No such anger was visible or felt…Was a survey conducted? Where did you base your conclusion that citizenry did not like him?” he said, adding that drivers, store owners, hotel bell boys, and Filipinos there “had nothing but admiration” for Duterte.

But arms purchases were the other elephant in the room.

The warm welcome, the red carpet reception make sense in the light of Duterte’s plans to buy defense equipment from Israel, among the world’s top arms dealers.

There was no mention of any arms-related event in Duterte’s schedule sent to media but a defense official in the delegation confirmed to Rappler that there were many quietly-held meetings related to the purchase of Israeli military equipment. The two countries, however, did not sign any arms deal.

However, security and weapons-related agreements were made by the private sector.

Before the trip was over, 6 such business-to-business agreements were signed, out of a total of 21 private sector deals.

A separate itinerary was prepared by the Philippine embassy for soldiers and security officials. Duterte had earlier said he brought along some retiring military and police personnel as a reward for fighting Muslim extremists during the Marawi siege.

It’s hard to determine exactly how many tagged along. Presidential Spokesman Harry Roque put the size of the delegation – including officials, security, close-in staff, and media – at 229. “At least” 150 businessmen were also part of the visit, but they all supposedly traveled “on their own accounts,” said Roque.

The arms industry – and which countries benefit from it – is a big deal for Israelis. A Haaretz newspaper article pointed out that Israel has already drawn criticism for selling “advanced weapons” to Myanmar in 2017, amid the ethnic cleansing there of the Rohingya, a Muslim minority.

That same year, the Philippines’ purchases of Israeli equipment soared to $21 million, a big improvement from only $6 million in sales two years ago, before Duterte assumed the presidency. During the visit, Duterte stoked the fire when he said he wanted the military to buy equipment from one country “only” – Israel, because its government could be trusted not to spy on the Philippines.

“My orders to my military is that in terms of military equipment, particularly intelligence gathering, we only have one country to buy it from them. That is my order specifically, Israel…America is a good friend but you know, if he would sell you something, he would also be listening,” Duterte told Israeli President Reuven Rivlin on Tuesday, September 4.

Outside Rivlin’s official residence where the two presidents met, Israelis gathered in protest, holding up pictures of Duterte wielding a rifle, emblazoned with the words, “Stop the killings!”

But amid the controversial headlines, Duterte managed to bring home government deals likely to make real impact among Filipinos.

Chief among this is the Memorandum of Agreement that will drastically reduce the fees paid by Filipinos to work as caregivers in Israel. Netanyahu, during the signing of the deal, said it would slash as much as $12,000 from expenses incurred by Filipinos seeking such work.

Netanyahu added a personal touch to his speech, saying his own late father benefited from the care of a Filipina caregiver.

“I, like many, many Israeli families, [are] deeply moved by this show of humanity,” said Netanyahu. Presidential Spokesman Harry Roque also revealed the signing of an agreement with Israel’s Ratio Petroleum for oil exploration east of Palawan. According to a Haaretz  report, Ratio Petroleum had already won a license for this 3 years ago, or during the Aquino administration.

But the concession had been waiting for Duterte’s signature for the past 6 months, according to the report. Executives of the Israeli company asked the Israeli foreign ministry to negotiate for a signing during Duterte’s trip.

Roque had said the signing was set to take place on Tuesday.

The Israel visit is a lesson on the real consequences of Duterte’s remarks. While governments eager to make lucrative deals might be willing to ignore his unsavory words, the same cannot be said of their constituents.

The Israeli media and concerned citizens managed to put a stain on a trip that should have otherwise been merely historic.

On Wednesday, Duterte leaves Israel for Jordan, another country that has also fallen prey to the fiery President’s verbal assaults.