INSIDE STORY: How Duterte handled Trillanes fiasco from Israel, Jordan 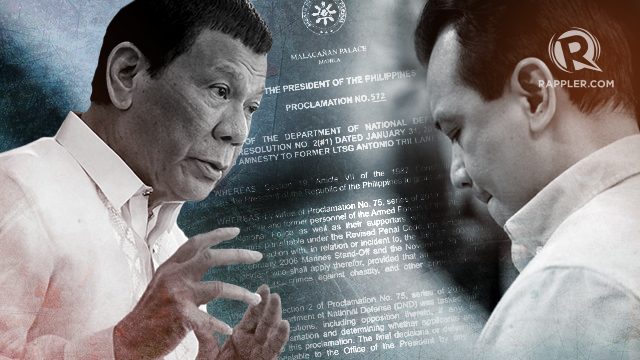 Facebook Twitter Copy URL
Copied
Who was the most surprised at President Duterte's order revoking Senator Trillanes' amnesty? His own Cabinet.

MANILA, Philippines – As President Rodrigo Duterte took off for official visits to Israel and Jordan on September 2, he left behind a big surprise for Senator Antonio Trillanes IV and the public. But it turned out that the most surprised was the President’s own Cabinet.

Duterte’s order against Trillanes bypassed two key Cabinet officials mandated to deal with the legal and security implications of an amnesty revocation.

The fiasco that followed also showed that the President did not anticipate the consequences of his proclamation, nor did he ask his Cabinet to prepare for them.

Thus, on the basis of what was stated in the President’s proclamation, defense and military officials left behind in Manila proceeded to implement the order to “apprehend” the senator so that “he can be recommitted” to a military jail. They announced to the public that soldiers were ready to arrest the senator even without any warrant.

Ironically, it was the 3 ex-military men in Duterte’s Cabinet who were with him in Israel and Jordan who eventually preferred to wait for a court warrant.

Based on accounts of 6 government officials privy to the President’s actions before and after he revoked the amnesty of Trillanes, Rappler learned the following:

Less than two days after his departure for Israel, Duterte’s explosive Proclamation No 572 appeared in the Manila Times on September 4. The document, signed by Duterte on August 31, seeks to void the amnesty granted to Trillanes and fellow former rebel soldiers in 2011.

It directed the Department of Justice (DOJ) and Armed Forces of the Philippines (AFP) “to pursue all criminal and administrative cases filed” against Trillanes. Police and soldiers were ordered to “employ all lawful means to apprehend” him.

Government lawyers scrambled for arguments on how Trillanes’ cases for coup d’etat and rebellion in civilian courts, dismissed 7 years ago, could be resurrected merely by a presidential order. Meanwhile, the Department of National Defense (DND) spokesman announced a court martial was being convened and Trillanes’ detention cell was being prepared. 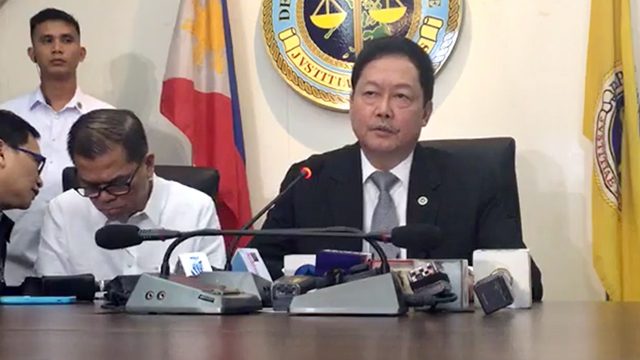 As for Trillanes, he found himself at the center of a media frenzy and quickly basked in it. He is ready for an arrest, he declared. He is not afraid of the President.

While this drama was unfolding back home, Duterte, several Cabinet members, and practically the entire military and defense hierarchy were in Israel.

How did Duterte handle the Trillanes controversy from thousands of miles away?

Here’s a timeline of events, pieced from accounts of 6 sources and some on-the-record pronouncements by officials.

Lieutenant Colonel Thea Joan Andrade, chief of the Discipline, Law and Order Division of the Office of the Deputy Chief of Staff for Personnel, issued a certification stating “there is no available copy of his (Trillanes’) application for amnesty in the records.”

Duterte left for his Israel and Jordan trips. At the airport, before their departure, Executive Secretary Medialdea informed Justice Secretary Guevarra that Proclamation No 572 will be released on Tuesday. Guevarra would receive a hard copy of the document the next day, Monday.

While the clock read 2 am on Tuesday, September 4, in Manila, Duterte and his Cabinet members held a meeting in Jerusalem to discuss the official visit and security concerns back home. It was then around 9 pm and everyone was tired.

In the middle of a two-hour discussion that dealt with recent bombings in Sultan Kudarat, Nur Misuari and the Tripoli Agreement, communist rebels, and corruption in the AFP Medical Center, was an agenda item on the “revocation” of Trillanes’ amnesty.

It was then that Duterte informed them that his Proclamation No 572 would be coming out in a few hours in Manila. Duterte explained briefly that Calida had done the “research” and had found flaws in Trillanes’ amnesty. The document that would catalyze a national frenzy back home was discussed in all of 5 minutes.

According to a source present at the meeting, Duterte issued no orders on how the proclamation would be implemented.

There was supposedly no order from Duterte in that meeting for the military to arrest Trillanes right away.

The next day, 3 hours after breaking news on the proclamation in the Philippines, Presidential Spokesman Harry Roque held a press conference in Israel where he said civilian courts needed to issue an arrest warrant before Trillanes could be apprehended.

Responding to a reporter asking whether the government would already arrest the senator, Roque said, “In due course, because the case will have to be revived…. There has to be a determination na tuloy na naman ang kaso (the case will be pursued) and a warrant of arrest will have to be issued again by a court.”

Yet that same day, defense department spokesman Arsenio Andolong and military spokesman Edgardo Arevalo told the media that Trillanes could be arrested by the military without a warrant and tried by court martial because Proclamation No 572 reverted him to active service. National Security Adviser Hermogenes Esperon Jr, who was with Duterte, later contradicted the department’s stand, saying Trillanes was no longer a soldier.

Arevalo said soldiers were already at the Senate, waiting to apprehend Trillanes. Some active and retired military personnel apparently did not approve of the spokesmen’s statements. Arevalo was later asked not to speak to media, according to a military source.

A senior government official in Duterte’s delegation told Rappler it was AFP chief Lieutenant General Carlito Galvez who ordered the formation of a court martial for Trillanes’ offenses of conduct unbecoming of an officer and gentleman and “general article offense.”

He did so supposedly based on Duterte’s proclamation alone. He was at the time with Duterte in Israel. Galvez chose not to respond to Rappler’s request to confirm his court martial order. (READ: Little-known fact: AFP chief Galvez got amnesty for 1989 coup)

Guevarra, meanwhile, also ordered the filing of requests for a warrant based on the proclamation. We asked the justice secretary if he did so because of a verbal order from Duterte or Medialdea.

“No, DOJ did so pursuant to Proclamation No 572 which directed the DOJ and the AFP to proceed with the criminal and court martial proceedings,” Guevarra told Rappler.

At some point from Wednesday to Thursday, Lorenzana and Medialdea spoke with one another about the next steps on implementing Proclamation No 572. By this time, media had already reported about lawyer groups, lawmakers, and critics assailing  Duterte’s order.

According to a source, Medialdea told Lorenzana that it would be best to wait for the courts to issue a warrant.

On Thursday night in Jordan, Duterte called a meeting, partly because at least 3 Cabinet members wanted to speak with him regarding the Trillanes issue. One of them was Roque, who had by that time gotten a sense of the immense public reaction to the proclamation and noticed all the air time Trillanes was getting out of it.

This Jordan meeting was much longer than the Israel meeting, stretching until 1 am. There were other topics aside from Trillanes.

One of the first things Duterte supposedly said during that gathering was, “I signed the proclamation because Calida said there is an error in the amnesty.” He appeared to be explaining himself. What followed was a discussion on what the administration’s stance would be given the largely negative coverage of the proclamation and public confusion.

Roque was at least one Cabinet member who argued that the provost marshal could already issue an arrest order, allowing the military to apprehend Trillanes without a warrant.

Medialdea, the 3 ex-military men in the Cabinet – Esperon, Lorenzana, and Department of Interior and Local Government officer-in-charge Eduardo Año – preferred to wait for the civilian courts. Esperon and Año are former AFP chiefs. (READ: Don’t mess with the military)

In the end, Duterte went with the latter option “maski mas matagal (even if it would take longer).” All the sources Rappler spoke to for this story said it was Duterte who ultimately made the decision to wait for an arrest warrant.

“PRRD is a former public prosecutor who knew his procedure. He doesn’t have to be advised,” Medialdea told Rappler.

That Jordan meeting was also when Duterte first floated his theory that Trillanes’ amnesty is void because his certificate of amnesty was signed by then-defense secretary Voltaire Gazmin and not President Benigno Aquino III. Nowhere is this argument found in Proclamation No 572.

It was on this day when Duterte decided to fly home a day earlier. Roque had said there was no particular reason for this, except that there were no more engagements on Saturday and so leaving on Friday would be acceptable and cost-efficient.

The next morning in Jordan (afternoon in Manila), Roque announced  Duterte’s decision in a press conference with Filipino reporters.

At around the same time, the defense department and the armed forces issued separate statements saying they would wait for a court-issued warrant and put off any plans to send military police for Trillanes. That day, the senator filed an urgent motion with the Supreme Court to speed up hearing his petition to stop Duterte’s proclamation.

Later that day, Duterte and his delegation departed for Davao City.

Duterte held a press conference upon his arrival in Davao City and spoke publicly for the first time about his proclamation. He acknowledged it was the “bright” Calida who had recommended the revocation to him.

That was also when Duterte talked about his Gazmin theory, adding another dimension to the controversy. Roque would later on say that while this theory was not mentioned in the proclamation, it could be brought up in the arguments before the Makati Regional Trial Courts.

From Sunday to Monday, Duterte got some rest. His schedule was cleared of public engagements.

Then on Monday, Roque announced that Duterte wished to “address the nation.” He couldn’t say if the President will be making any specific announcement, but presidential aide Bong Go told Rappler that Chief Presidential Counsel Salvador Panelo would “co-anchor” what he described as a “showbiz-type” of interview. That day, Go was not certain if Duterte would take questions from the media. However, Malacañang had informed reporters that the “address” would be a “press conference.”

An hour before the “press conference,” Malacañang said it would no longer push through and in its stead would be a “tete-a-tete” between Duterte and Panelo. The one-on-one interview was aired live.

Roque later on explained that the “obvious” reason for the “address to the nation” was to give the President a chance to explain his take on pressing issues like the proclamation and nflation.

In the long interview, Duterte mentioned Trillanes 20 times, usually in connection with what he perceived to be some groups in the military taking the senators’ side. He kept reminding the military of how he doubled their salaries and his assistance to military hospitals.

From slighted benefactor, Duterte careened to angry father, challenging the military to overthrow him if they were unhappy with his leadership.

The sequence of events reveals one thing – Duterte did not expect and prepare for the public reaction to his proclamation.

In Israel and Jordan, sources said he was preoccupied with the many meetings and official functions. His mind was on canvassing for armaments, sealing agreements for Filipino migrant workers, and the Marawi soldiers he had brought along.

All that time – when there were no new instructions from Duterte – there was confusion back home on how the police or the military would “apprehend” Trillanes, as the presidential proclamation spelled out.

By the time Duterte’s plane landed in Davao City on September 8, Trillanes had been transformed into what he once was when he mounted the Oakwood mutiny with fellow junior officers in 2003: a voice of dissent. – with reports from Carmela Fonbuena/Rappler.com