Sep 22, 2018 7:22 PM PHT
Rambo Talabong
Facebook Twitter Copy URL
Copied
(UPDATED) In the days leading up to Typhoon Ompong, what could have been done to prevent the tragedy in Itogon, Benguet?

BAGUIO CITY, Philippines (UPDATED) – At the foot of a mountain in Benguet stood a battalion of men at work. Shoulder to shoulder, they passed one skull-sized stone from a pair of hands to another, until it went to higher ground.

From the pit where the rocks were picked tilted the remnants of a building – the skeleton of a cement-wrapped steel foundation barely hanging on to the earth.

Stacks of soil, wood, and metal were scattered further down. Beneath all the wreckage, the rescuers were looking for someone – anyone, dead or alive – to carry home to mourning families.

Just days before, the ruins formed the busy mining “bunkhouse” of Level 070, Barangay Ucab in Itogon. It consisted of two linked concrete houses where dozens of miners stayed with their families. 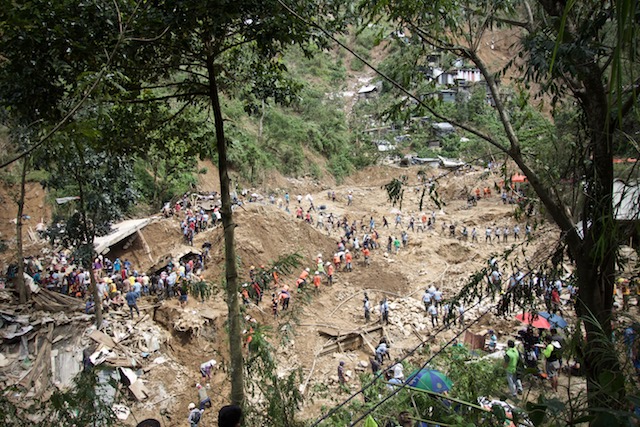 The miners had come from other towns in the Cordillera Administrative Region, praying to find gold in Itogon. But all was taken away from them after Typhoon Ompong (Mangkhut) came – the strongest storm so far in 2018.

As of September 21, or 6 days after the landslide, 31 bodies have been pulled out of the soil lifeless. At least 40 remain missing.

“It was force majeure,” Benguet Governor Crescencio Pacalso said in a press briefing on Wednesday, September 19, inside the centralized command center in Itogon.

As the crisis evolved, however, it had become apparent that nature was not solely to blame for the losses. Choices of people, from officials to locals themselves, have also led to the tragedy of Itogon. 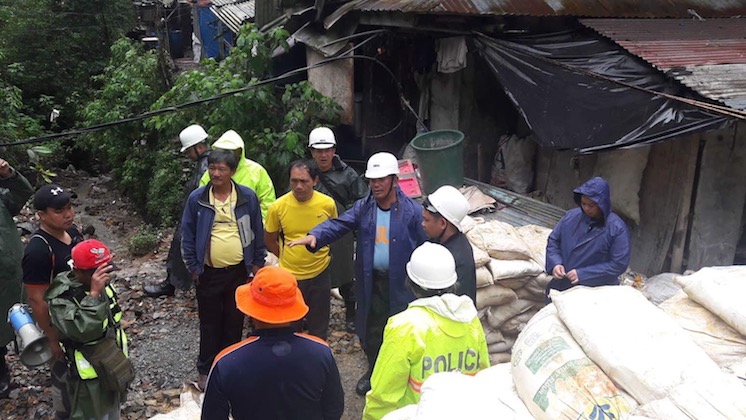 Neither the local officials nor the miners in the area were completely clueless about the risk of the earth from collapsing.

In saying that uncontrollable circumstances were to blame, Governor Pacalso disclosed that they had already observed that the top crust of the mountain had already been soaked before Ompong’s landfall.

“It was heavy rains that occurred for almost two months that caused the soil to be heavily saturated and caused it also to collapse,” Pacalso said during the same press briefing.

As early as the day before Ompong hit land, the Itogon local government – headed by Mayor Victorio Palangdan – already decided to enforce preemptive evacuation in Level 070. 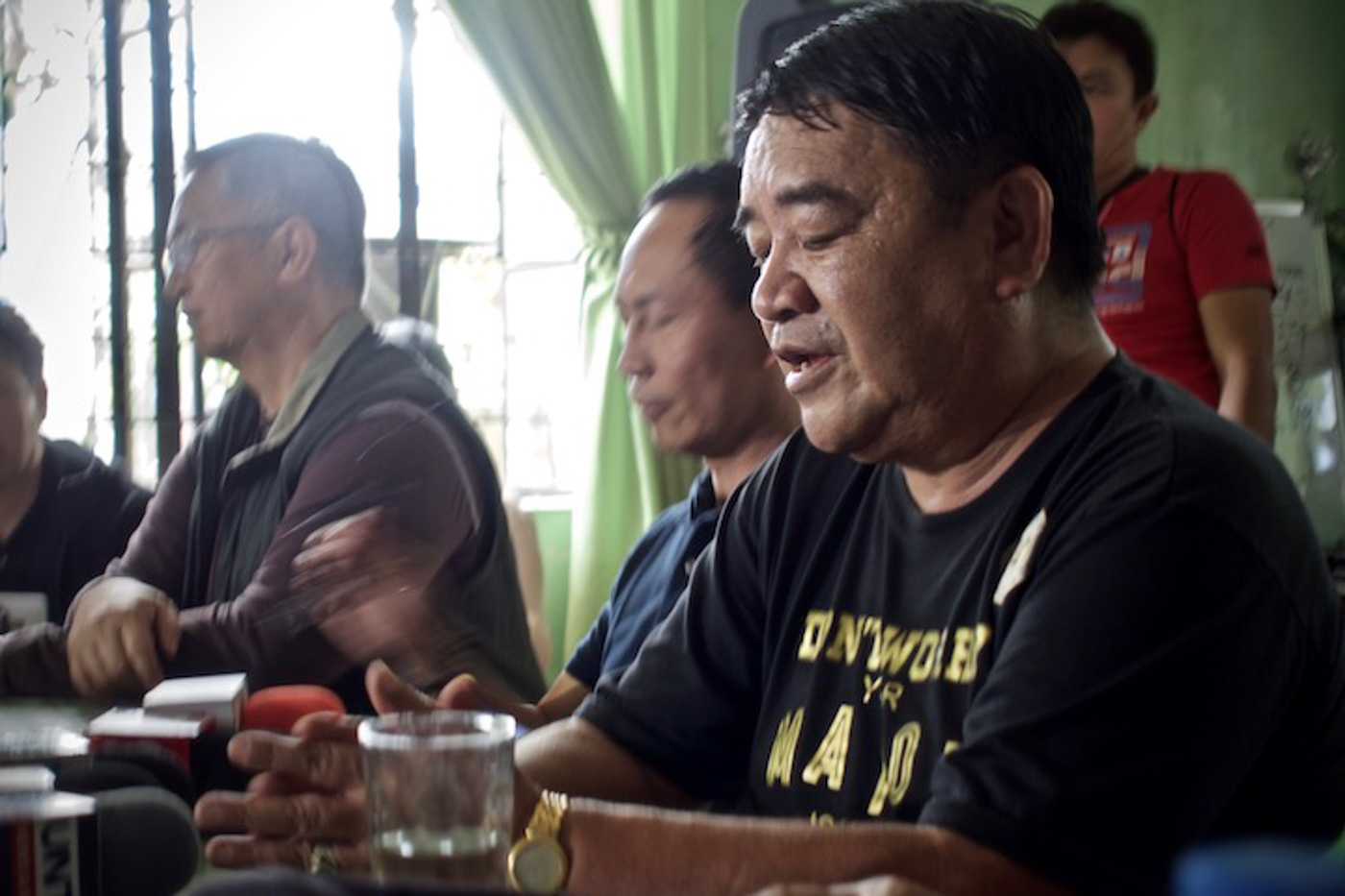 Cops expected that the miners would be more receptive, as news from days before were replete with warnings that the storm would be akin to Typhoon Yolanda (Haiyan), which left thousands dead in 2013.

“Ayaw nila sumama. Maayos na raw sila doon. Tinawanan pa nga kami (They didn’t want to go. They were all right there, they said. They even laughed at us),” said Itogon police chief Senior Inspector Heherson Zambale, who himself led the team in the visit.

Zambale added that some of his men even tried to pull some residents to leave, but they did not budge. Cops could not insist on carrying people away, Zambale said, as they were only given orders to enforce a preemptive evacuation.

The community was not being completely careless. They were counting on experience, Zambale said.

The taller building of their bunkhouse had been used as an evacuation center by miners and their families during past storms. They would stay there until the sky calms down.

“Kung saan sila sumisimba sa second floor noong isang building, doon sila pumupunta kung may bagyo (Where they attended Mass, at the second floor in the other building, that is also where they go when there’s a typhoon),” Zambale told Rappler in a phone interview on Wednesday, September 19. 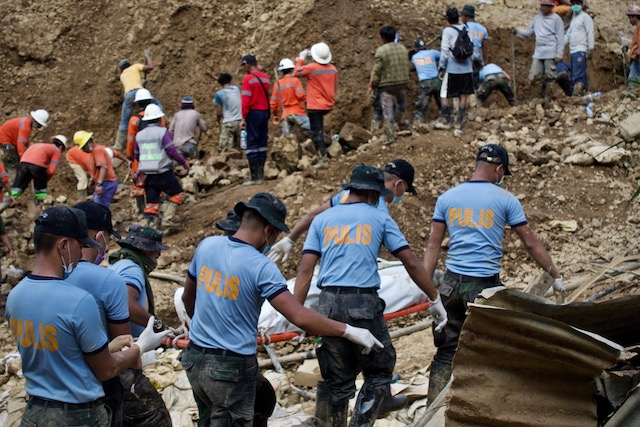 If they already knew about the soil being soaked, why didn’t the local government implement forced evacuation and coerce civilians to go to safer ground?

“Forced evacuation is part of the response mechanism of the LGU [local government unit] under its own rules and regulations,” veteran disaster response officer Johnny Yu told Rappler in a text message.

Yu was referring to Republic Act Nos. 10121 and 6975, which together mandate each local government to have its own disaster response plan given the frequent calamities that visit the country each year.

This means that local officials must know the terrain of their people like the back of their hand to accurately assess the vulnerability of specific areas before making life-deciding judgments.

Itogon Mayor Palangdan explained that while they saw a possible landslide, there were no clear signs of threat that gave them reason to force people out of their homes.

Disasters, he said, are trickier to read in the mountains.

“The situation in Cordillera is not the same as in the lowlands. In floods, you can see the water level rising. That’s forced evacuation, where you carry the people to safer ground,” Palangdan said in a mix of English and Filipino during a command center press briefing. 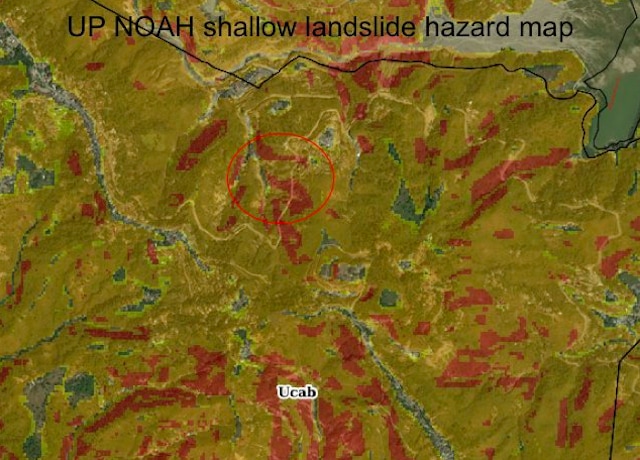 For busy officials who don’t have the time to go around to know where their constituents live, there is online forecasting application Project NOAH, which could show through its detailed maps which areas across the Philippines are vulnerable to disasters.

Using the map, disaster scientist Mahar Lagmay pointed out that torrential rain had been repeatedly announced in the news, and the online map showed where landslides could happen.

Evidently, the area where the packed bunkhouse was located lit up red.

“We had knowledge of Ompong. We knew its track, we knew the rainfall, we expected hazards and consequences, and it did happen. The warning was good, but the response was not appropriate,” Lagmay told Rappler in a phone interview.

Lagmay said that while the miners and their families had valuable practical and historical experience, this knowledge is always proven wrong when a bigger disaster – a storm like Ompong, for one – hits them.

“Disaster victims will always say that this has never happened before, this is the first time, we never expected this. What is the lesson here? That means that we need to prepare for bigger hazards than our communities have experienced. Local knowledge is good, it’s necessary, but it is not sufficient, it should be complemented by scientific information,” Lagmay explained.

The disaster scientist lamented that based on the NOAH map, safe evacuation areas were just 200 to 600 meters away from where the bunkhouse stood.

“We are doing something wrong,” he added.

Many what-ifs could have been changed, both for locals and officials, but the Itogon tragedy is not limited to the days that preceded it. There are policies and laws that could’ve prevented the tragedy if only their enforcement had not been neglected. – Rappler.com

READ the conclusion: Itogon tragedy: When the land of promise buried its people