The Unravelling of Harry Roque 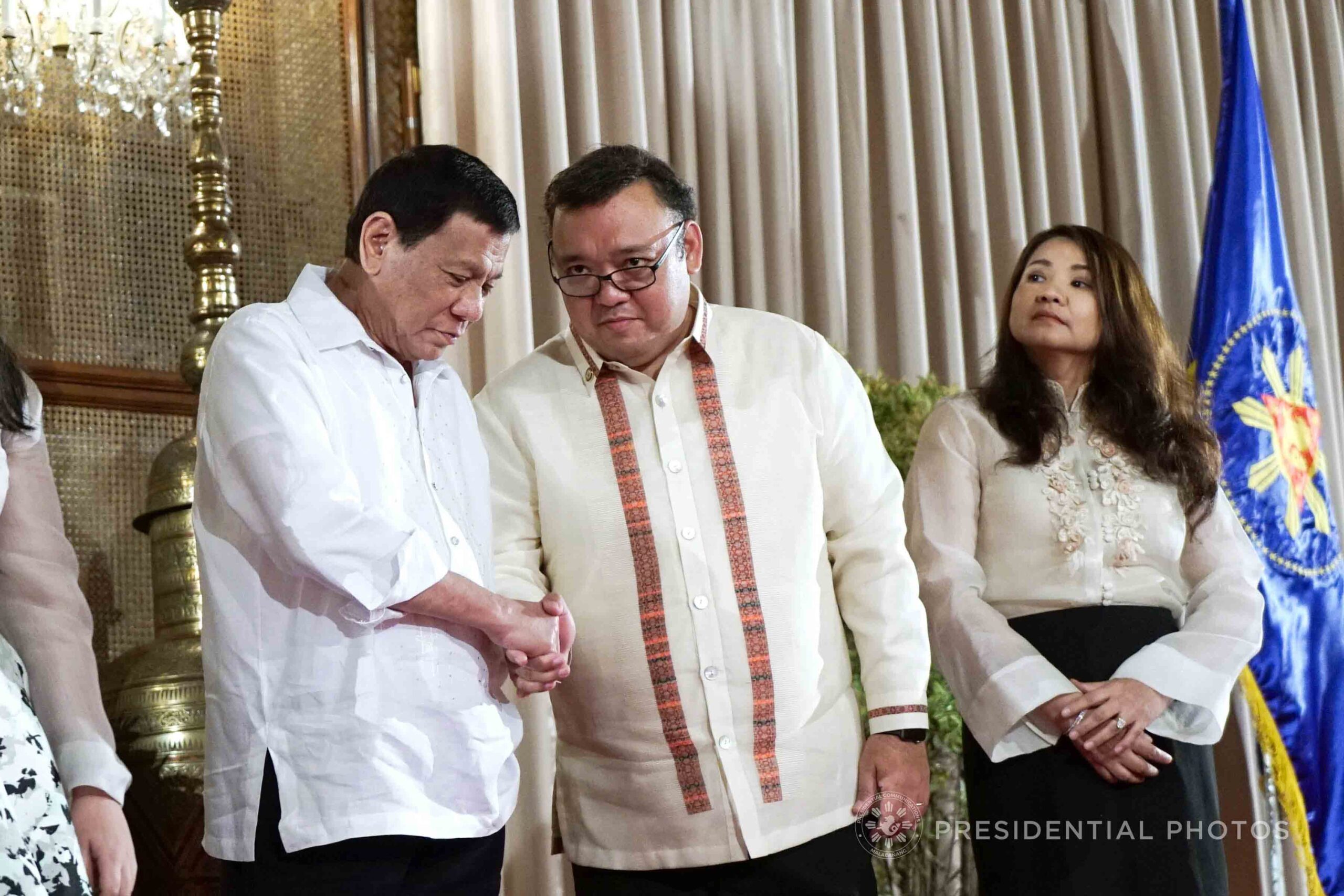 Facebook Twitter Copy URL
Copied
It's been a crazy week for the presidential spokesman. But will a few days define the course of his 2019?

MANILA, Philippines – A “deviation” from the plan.

This was how Harry Roque described a series of events that threaten to derail a plan one year in the making – his 2019 senatorial bid.

Ironically, it was the man for whom he had put at stake his name, reputation, and principles, who had catalyzed the dizzying chain of events.

“Whatever has happened in the last few days were really major deviation from plans that even the President knew about,” said a beleaguered Roque on Tuesday, October 9.

Roque had reason to be concerned. Mere days away from filing his certificate of candidacy for senator, President Rodrigo Duterte had done 4 things that looked bad for Roque:

All this happened in a little over a week – from October 4, when Duterte gave a speech before Philippine Military Academy (PMA) alumni, to October 11, when presidential aide Bong Go announced Panelo would start his work as spokesman while Roque was on leave.

Duterte’s comments about Roque in front of PMA alumni might have partly been uttered to elicit laughter, but they did damage.

Here was Roque counting on the endorsement of a popular president and the same president saying there’s no way he’ll win, even with that endorsement.

So close to the finish line, Roque did not expect any surprises. But surprised he was.

“Come on, for the past 5 or 6 months, he’s been calling me senator, for all intents and purposes, endorsing my bid for the Senate. So I was taken aback with his statement also with the PMA alumni. So it was a game changer so to speak. It was a change in tone,” he told reporters.

He said his agreement with Duterte was he would serve as his spokesman for only a year. This confirmed speculations that Roque was using the Malacañang post as a platform to prime the public for his senatorial bid.

The speculations became knowing smirks when Roque began holding press conferences in different parts of the country, including one in Cebu where fans bearing his face were distributed.

“When I came on board it was clear it was to be for a year. And the general context was, it was to prepare me for what will happen a year later,” Roque said on Friday, October 5.

Aside from voicing his doubts about Roque’s chances in 2019, Duterte disclosed his Cardinal Santos Medical Center visit, which struck many – including the spokesman – as a blow to his credibility.

“It’s difficult to continue unless people believe me and now I think people will not believe me because of the incident on his health,” Roque said during an October 5 press briefing.

Not knowing about the hospital trip made Roque look like he had been lying to the public or that he had been kept out of the loop on purpose. Both are unflattering perceptions.

To be fair to Roque, he never outrightly claimed Duterte had not visited the hospital. In response to a reporter asking if Duterte had been “hospitalized,” he uttered the now infamous statement that had been turned into memes: “Absolutely no truth to it. He just took his day-off.”

Thus, Roque’s remark was truthful in that Duterte merely visited Cardinal Santos Medical Center and was not admitted as an in-house patient.

But most people didn’t see it that way.

The day after Duterte’s speech, Roque spoke like a hurt lover.

In front of Palace reporters, he complained that he had been “kept in the dark.”

“I do concede that his going to the diagnostic exam was something that I did not know and therefore I am inclined to believe that perhaps I am not in a position to continue with this kind of function,” he said before almost walking out.

Reporters persuaded him to stay and continue with the press conference where one television correspondent asked if his words, along with his attempt at a quick exit, meant he was resigning.

“Let’s just say I will think twice about my options. I need a weekend now to decide,” he said.

Roque also took the opportunity to gripe about a longstanding concern he had aired about before – almost a year as spokesman, his proposed executive order creating a separate Office of the Presidential Spokesperson had yet to be signed by Duterte.

Since there was no EO, Roque was dissuaded from hiring more personnel of his own.

Then, he again alarmed reporters when he said he might not be holding press conferences the following week but eventually assured them he would announce his final decision – whether to run or stay – on Monday, October 8.

But come Monday, Roque was nowhere to be found.

Media, some of whom already left their homes to be present at his highly-anticipated press briefing, were told he had taken a leave.

The surprises weren’t over. Reporters were soon told Roque would be joining the Cabinet meeting that evening. He said he was on leave from holding press conferences, but not from his other functions. Presidential aide Bong Go even shared a photo of Roque with him and other Cabinet members – former foreign secretary Alan Peter Cayetano and outgoing political adviser Francis Tolentino. The 3 were making childish poses, as if trying to grab Roque, while the spokesman smiled on.

Roque did not resign during the Cabinet meeting, as some thought he would.

The next day, and again to the shock of reporters, Roque held a press conference. This time, he said, he had to hold a briefing to make major announcements.

Still, no decision had been made between Duterte and himself, he said.

He denied taking a leave just to file his candidacy at the Commission on Elections.

That leave, he said, was requested a long time ago and was for him to attend a conference in China. He’d be back the following week.

The confusing turn of events reflected Roque’s indecision which was eventually bared by Duterte himself the next day, Wednesday, October 10, when reporters had a chance to question him on his spokesman’s status.

It seemed the President himself was confused and even a bit frustrated by Roque’s indecision.

‘I think the manner by which he mentioned it was typical Duterte, ‘cariño brutal’ if you need to put it. But I think he’s sent the message that he prefers me to stay.’

(He said he’s running. Not running. Running. Then I said – I had to choose quickly so there is no paralysis in the flow of functions. Now, he isn’t running but I don’t know where to put him. He’s always changing his mind.)

In that press conference, Duterte announced he would replace Roque with Chief Legal Counsel Salvador Panelo. The official Malacañang order on Panelo’s new designation would be signed two days after.

What drove Duterte to deal what some would call a death blow to his spokesman’s own senatorial aspirations?

The President had no intention of abandoning Roque to the wolves. He had wanted Roque to stay on as his spokesman. In fact, Duterte was prepared to expand Roque’s portfolio by offering him the post of Press Secretary which would give Roque the powers of Presidential Communication Secretary Martin Andanar.

Duterte made Roque the offer moments before his PMA alumni speech where he thumbed down his spokesman’s senatorial bid.

To some extent, Roque recognized this.

“I think the manner by which he mentioned it was typical Duterte, ‘cariño brutal (tough love)’ if you need to put it. But I think he’s sent the message that he prefers me to stay,” the spokesman said.

But whether intended to harm or not, Duterte’s move struck most as a thousand times more damaging because of how Roque had gone out on a limb just for the President.

Say what you want about Roque, but he’s given defending Duterte his best shot.

It was Roque who consistently took the punches, not just for Duterte but for the entire administration, for rising inflation, rice shortage, West Philippine Sea incidents, murders of mayors and teenagers, and the President’s own alarming statements. (READ: Duterte Dictionary: How Harry Roque interprets what the President says)

He’s had to mouth positions shockingly contrary to his own not a few years ago on issues said to be close to his heart – the International Criminal Court, international ruling on the West Philippine Sea, and press freedom. (READ: Harry Roque pirouettes for Duterte)

Several times, his old self came back to haunt him. Netizens unearthed his blog entry where he heaped praises on opposition Senator Antonio Trillanes IV and a video where he urged his audience not to vote “self-professed murderer” Duterte for president.

‘He said he’s running. Not running. Running. Then I said – I had to choose quickly so there is no paralysis in the flow of functions. Now, he isn’t running but I don’t know where to put him. He’s always changing his mind.’

But Roque bit the bullet and forged on, eyes on the prize.

But will the prize elude him? What has he got to show for his tumultuous one-year stint as Duterte’s mouthpiece?

In March 2018, 5 months into being spokesman, Roque garnered a 70% awareness rating in Pulse Asia’ Research, Incorporated’s senatorial survey. Based on the poll, 8.7% of respondents said they would vote for him, giving him a rank of 27th to 36th.

Come September, or a month before candidacy filing, that awareness rating increased only slightly to 76% but the percentage of respondents who said they would vote for him dipped to 7.7%. He slid in ranking to 29th to 36th.

In short, the year spent bending over backwards for Duterte did not take him even in the vicinity of the vaunted Magic 12, the circle of probable winners that promises electoral victory.

Duterte chose not to wait for Roque to announce his resignation before naming Panelo as his new spokesman, though possibly only temporarily.

Because Roque has not yet resigned and was not fired, as confirmed by Go, the President has two spokesmen at the moment.

Far away in China as headlines teased the tenuousness of his status, Roque adamantly told reporters that he would answer all queries on Monday, October 15.

If this week was a week full of uncertainty for Roque, the next will be make or break. Will he forge on with his 2019 plans or stay with Duterte?

Will what his critics see as a deal with the devil bring 2019 victory or will Harry Roque lose his gamble on Duterte? – Rappler.com