Part 3 of a series

PANGLAO, Bohol – With the tourism boom around the bend, the municipality of Panglao is banking on its 3-year-old system to solve the tourism-waste nexus.

Celerina Mijos, a regular employee hired by the municipality, is a waste segregator, a key job in Panglao’s waste management system.

Stationed at the Lourdes Ecological Facility, the central Mineral Recovery Facility (MRF) of Panglao, she clusters garbage collected by the barangay MRFs and prepares the trash for two destinations: the piles of recyclables are sold to a private recycling plant in Cebu while the heaps of residuals are sent twice a week to the landfill.

“We were hired because we are familiar with this job. We’ve been garbage segregators for 5 years now,” she said. “The heaviest bag that we carry is 10 kilos… around 5 to 10 kilos. It’s heavy but we endure.”

Panglao’s solid waste management system follows the provisions of Republic Act 9003 or the Ecological Waste Management Act, which identified the minimum requirement: the construction of one MRF per barangay.

All of Panglao’s 10 barangays have MRFs that are directly under the supervision of the barangay captains.

Starting 2015, the local government implemented the system in its 10-year solid waste management plan. It did so through the following:

But aside from segregating the waste generated by the municipalities, Celerina and 9 other segregators are also handling the existing garbage in the facility, a feat since the unsegregated trash covers the entire 1.5 hectares. In 3 years, Celerina and 9 other waste segregators were able to control the existing waste in the 1.5-hectare Lourdes facility. They were even able to “push back” the mountains of garbage that filled the facility when it was an open dumpsite in 2007.

A history of neglect

The half-hectare entrance to the facility has been cleared and is now a site of thriving plants and flowers, and a spacious parking lot for Panglao’s two dump trucks.

The garbage problem is not new in Panglao.

The whole province of Bohol has a history of “poor” waste collection and management. In 2003, Bohol’s garbage collection services reached only 14% of households in 48 municipalities.

With only one dump truck in 2003, Panglao’s waste collection could accommodate 15 households only, leaving 4,320 households to their own practices of disposing their trash: dumping in land or water, burying, or composting.

The Executive Legislative Agenda (ELA) for 2011-2013 acknowledges the “laxity on the strict imposition of existing regulations regarding solid waste management and non-compliance of the zoning ordinance” that is prevalent among all local units in Bohol.

It was only when Fudolin was appointed officer of the solid waste management office that a firmer system was put in place.

But when the construction of the airport materialized, working groups were created to solve the garbage problem. Now Panglao has a 46% collection rate among households and non-households. This is how it managed its soid waste. But having a system is not enough. Panglao’s house cleaning is overwhelmed by the volume of trash from tourism establishments that are brought on a daily basis to the MRFs.

“In barangays with a lot of tourism establishments, we assist the barangays in collecting garbage with the dump truck,” Fudolin said. “But one trip is not enough – they have to go back to collect the segregated waste.”

This was especially the case in Barangay Tawala, the center of tourism in Panglao.

“The MRF in Tawala is a mess because of the volume of recyclables and residuals the barangay collects every day. Tawala is a big problem because segregators cannot finish the collected garbage in one day.” 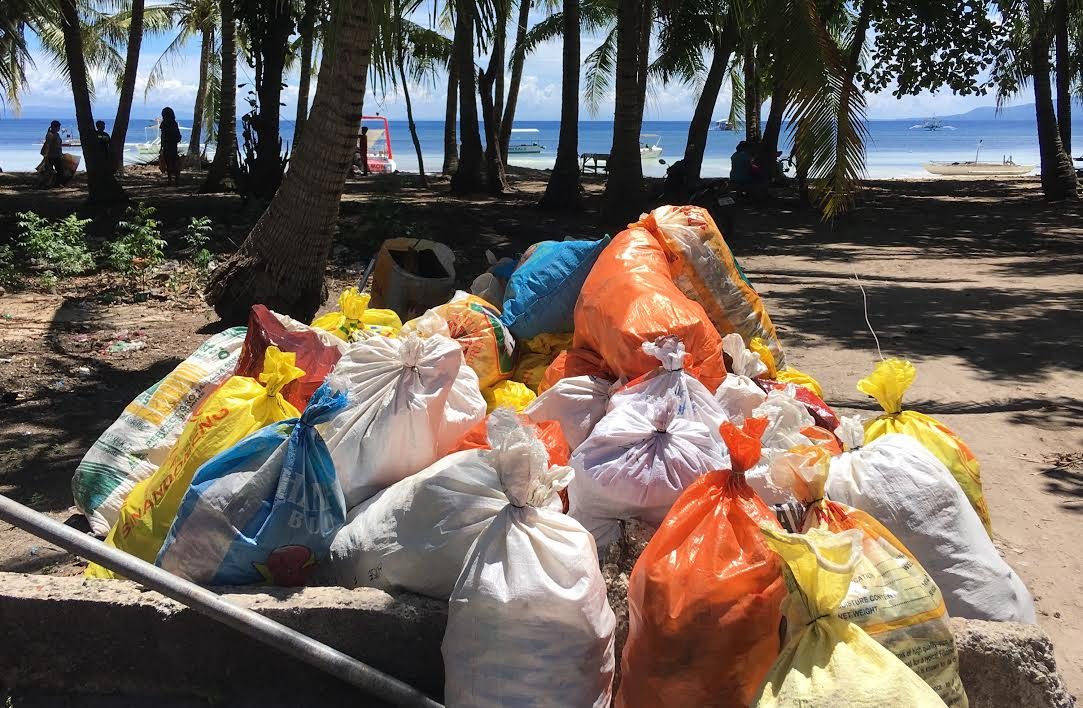 Because of the strict implementation of the “No Segregation at Source, No Collection” policy and the collection only of residuals and recyclables, establishments have resorted to disposing their trash by the roadside, on beaches, and vacant lots when nobody is looking.

He also admitted that the municipality is overwhelmed by the rise in tourism visits and activities, especially after the temporary closure of Boracay. The opening of the new Panglao International Airport is expected to exacerbate the garbage problem and it is feared that the municipality will not have enough resources and capability to address it.

“Right now we are still solving the garbage problem at the Lourdes dump site while managing the daily waste outputs of existing businesses,” Fudolin said. “Once the airport opens… garbage will be a much bigger problem,” he lamented. – Rappler.com

To be continued: Part 4 | In Panglao: Tourism funds waste management and conservation