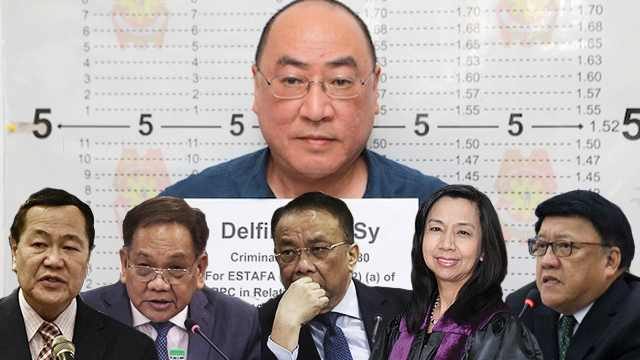 MANILA, Philippines – It was a scam that allegedly defrauded housing loan agency Pag-IBIG of P7 billion worth of contributors’ money, but in July 2018, the Supreme Court said in a majority decision that there was no syndicated estafa and granted bail to the supposed mastermind – Delfin Lee.

The case of Lee and Globe Asiatique was one of the high-profile cases that the Supreme Court decided in favor of powerful interests in 2018. It followed the flip-flop of the Court that resulted in a big win being handed to Philippine Airlines (PAL) in its 20-year-old labor dispute.

Lee is now free, and has even visited his Xevera village in Pampanga, the center of the scam.

A whole arsenal of government lawyers is trying to send him back to jail, with the Department of Justice (DOJ) filing an appeal aided by the Office of the Solicitor General (OSG).

In his dissent, Associate Justice Marvic Leonen said the ruling “ignores this devious agency” of Lee and “places a primacy on technicality at the expense of the essence of Presidential Decree (PD) No. 1689.”

The 7-5-2 ruling was written by Bersamin, relying mainly on the number of people involved in the estafa, and where the money came from.

Looking back, Delfin Lee’s Globe Asiatique (GA) engaged Pag-IBIG in 2008 for a mechanism that allowed the developer to process directly with Pag-IBIG the loan applications of buyers of the Xevera housing project in Pampanga.

According to Pag-IBIG, an aggregate amount of P7 billion was released to GA in a span of two years from 2008 to September 24, 2010, representing a total of 9,951 accounts. (READ: Pag-IBIG sets safeguards vs another Globe Asiatique scam)

But when Pag-IBIG started to independently validate the information of the loan takers, they “discovered some fraudulent transactions and false representations purportedly committed by Globe Asiatique, its owners, officers, directors, employees, and agents/representatives, in conspiracy with Pag-IBIG employees.”

Even Lee’s own employees confessed that they were instructed to recruit “special buyers” to pose as buyers of the housing units to be able to take out a loan from Pag-IBIG. Lee devised a plan where later on, real buyers could take over the housing unit built with the aid of contributors’ funds from Pag-IBIG.

So why is this not syndicated estafa but the bailable simple estafa?

One of the reasons was the defrauded money did not come from the general public, as interpreted by Bersamin’s ponencia, which Bernabe agreed to.

The bailable simple estafa is defined by Article 315 of the Revised Penal Code.

PD No 1689 defined and increased penalties for syndicated estafa. According to PD No 1689, syndicated estafa occurs when the fraud “resulted in the misappropriation of moneys contributed by stockholders, or members of rural banks, cooperatives, ‘samahang nayons’ or farmers associations or of funds solicited by corporations/associations from the general public.”

Focusing on the element that the defrauding must be done against the “general public,” Bernabe said “it is undoubted that the private complainant is HDMF (Home Development Mutual Fund or Pag-IBIG); not the general public who claim to have been defrauded through the use of any juridical entity.”

The dissent of Carpio disputes that view for the simple reason that Pag-IBIG is the “provident” fund of the general public.

Carpio added: “The Pag-IBIG fund is the fund that was defrauded by Delfin Lee and his four co-accused through the use, and submission to HDMF, of loan applications and mortgage documents of fictitious loan applicants,” Carpio said.

Carpio even said that part of the loan proceeds given to GA came from “the mandatory contributions of the approximately 28,000 employees of the Judiciary.”

Bersamin’s appreciation of PD No 1689

PD No 1689 says that simple estafa becomes the non-bailable syndicated estafa “if the swindling is committed by a syndicate consisting of five or more persons formed with the intention of carrying out the unlawful or illegal act, transaction, enterprise or scheme, and the defraudation results in the misappropriation of money contributed by stockholders, or members of rural banks, cooperative, “samahang nayon(s)”, or farmers association, or of funds solicited by corporations/associations from the general public.”

The scheme went this way: Pag-IBIG gave loans to its members – through the GA – which were supposedly also its buyers, but who turned out to be either fake or some sort of a middleman.

Bersamin made a distinction, noting that “the funds solicited by Pag-IBIG from the public were in the nature of their contributions as members of Pag-IBIG and had nothing to do with their being a stockholder or member of Globe Asiatique.”

Basically, Bersamin said that the general public was not defrauded because their contributions were not the same money that went to GA.

Carpio disputed him, saying there is no distinction, that “the law merely requires that the defraudation results in the misappropriation of money or of funds solicited by corporations/associations from the general public.”

Bersamin also said that to be syndicated estafa under the law, the sole purpose of creating the organization should be to defraud.

“Given the rationale and purpose behind the enactment of P.D. No. 1689, it becomes inevitable to conclude that the crime of syndicated estafa can only be committed by the enumerated groups created for the sole purpose of defrauding its members through misappropriating the funds solicited from and contributed by them,” said Bersamin.

“Evidently, the evil sought to be prevented by P.D. No. 1689 does not exist in this case,” Bersamin added.

But at least for Carpio, it was clear that “Globe Asiatique tried to cover-up or conceal the defaulting questionable buyers by paying on their behalf, thus keeping their accounts current.”

Bersamin also focused on the number of participants specified by PD No 1689 for syndicated estafa, which is 5.

Apart from Delfin Lee, 3 others were charged: GA’s executive vice president, head of the documentation department, and head of the finance department, making them only 4.

Lawyer Alex Alvarez, who was manager of Pag-IBIG’s Foreclosure Department, was dropped because as Bersamin said: “If he was not related to Globe Asiatique either by employment or by ownership, he could not be considered as part of the syndicate supposedly formed or managed to defraud its stockholders, members, depositors or the public.”

“In view of their number being under five, the original charge brought against them was only for simple estafa,” Bersamin said.

But even Bernabe, who concurred with the result, disagreed with Bersamin on that part, simply saying that she believes that Alvarez and the 4 GA officials “conspired and confederated with one another in order to commit the fraudulent acts against Pag-IBIG.”

Carpio was more categorical, saying Alvarez had “indispensable participation in the crime of syndicated estafa.”

“Insisting on such an affiliation can also conveniently frustrate the ends of justice. A cabal of scammers can then nominally exclude one of their ilk from their organized vehicle and already be beyond Presidential Decree No. 1689’s reach, regardless of the excluded collaborator’s actual participation in their fraudulent designs,” said Leonen.

A highly-political case such as this would have made for a good discussion at the Judicial and Bar Council (JBC), except that the council did away with the public interviews saying the qualifications of the applicants can be gauged by the decisions and opinions they had written.

The narrow 7-5-2 win of Delfin Lee, a prominent businessman, is a good basis for the public, and more importantly, the JBC and President Rodrigo Duterte, to assess the judicial values of the applicants and judge if they are qualified to be the country’s next top magistrate.

When the JBC meets on Friday, November 16, they are expected to go over the applications. – Rappler.com