MANILA, Philippines – The divisive political dispute over the country’s West Philippine Sea strategy was aptly illustrated by former ambassador Wilfrido Villacorta when he stood up to speak his mind in a maritime forum held in Makati.

“Our country is so polarized now. If you disagree with [Supreme Court Senior Associate Justice  Antonio] Carpio, then you’re pro-China and [pro]-Duterte supposedly. And if you’re pro-enforcing the arbitral tribunal, then you are pro-US or pro-opposition,” said an exasperated Villacorta.

Camps are often divided between President Rodrigo Duterte and his predecessor, former president Benigno Aquino III. The ex-president had relied heavily on the US, while Duterte is swinging hard towards China.

Is there a middle ground?

But some said Duterte is going too far to the point of becoming submissive toward China. They welcome cooperation with China on various areas but caution against surrendering sovereign rights over the West Philippine Sea. They want Duterte to put back the arbitral ruling on the table and make it the foundation for navigating future engagements with the military superpower.

‘Devil is in the details’

Aileen Baviera of the University of the Philippines Asian Center said good relations with the world’s second largest economy will benefit the country, especially in the areas of energy security, regional peace and stability, and rule of law, among others.

“If sovereignty and constitutional issues will be successfully hurdled, China’s help with Philippine energy security should be welcomed,” said Baviera, referring to a planned gas deal between Manila and Beijing.

But “the devil is in the details,” Baviera warned. “There will need to be constant cost-benefit analysis for everything we do.”

Experts welcomed the apparent delay in the government’s plan to cooperate with China on oil and gas development, following an uproar over a supposed Chinese draft agreement that critics claimed was disadvantageous to the country. (READ: Xi’s Manila visit ‘more optics than substance’)

“[On] the larger relationship, there’s nothing wrong with trying to stabilize the relationship with Beijing,” said Washington-based analyst Gregory Poling of the Asia Maritime Transparency Initiative, a keen watcher of Philippine policy in the South China Sea.

“But it shouldn’t have to come at the expense of Manila asserting its rights in the South China Sea or calling out continued bad behavior from China,” Poling said.

“I think the inconsistency belongs to the nature of hedging. He does not trust the US while he thinks he can live with China. He also probably believes that the future is China,” said Vuving.

Vuving said all small countries in the region had been hedging in the face of the uncertainties of the “new normal,” where artificial islands allow China to dominate the skies and waters in the South China Sea.

Nations push and pull engagement with China depending on the situation.

Jay Batongbacal of the University of the Philippines College of Law Institute for Maritime Affairs and Law of the Sea said the Duterte administration may even claim that it is trying to balance the powers. The problem is that Duterte is “giving away too much too soon,” failing to inspire confidence that he is competent to do the delicate balancing act, he said.

“You might have the right idea. Improve relations and demonstrate that you’re independent from your treaty ally. But the execution has serious shortcomings,” said Batongbacal.

Batongbacal criticized the government’s “submissiveness, fatalism and defeatism with respect to Philippine claims.” He cited Duterte’s failure to protest incidents where the Chinese Coast Guard took the catch of Filipino fishermen or drove away a team of Filipino journalists in Scarborough Shoal off the coast of Zambales.

Duterte’s hedging may have defused tension in the South China Sea for now, but Vuving said the strategy is a “bad gamble” in the long term especially for the Philippines, because it preserves the “new normal” in the disputed waters.

“If you’re a small country that has no territorial dispute with China and you don’t need to fear Chinese encroachment in your territory, then maybe you can allow yourself to cooperate with China to a larger extent. But the Philippines is, as a matter of fact, China’s adversary in the South China Sea,” said Vuving. (READ: Q&A: How can PH get Mischief Reef back from China?)

Vuving also warned of “the big risks of debt traps and corruption that go with Chinese investment,” citing the experience of the Arroyo administration’s pivot to China and the more recent experiences in Sri Lanka, Pakistan, and Malaysia.

Vuving said the Philippines, as one of the “swing states that hold a key in the great power competition between the US and China,” should play a role in balancing China in the region.

“I’m not advocating excluding China from a future in international order. The question is how can we get China to accept the liberal order, right?” said Vuving.

How? Vuving has hawkish ideas. In the Philippines, critics of Duterte point to the international ruling that Duterte set aside in the name of friendship with China.

Aquino’s risky gamble, which also had its critics then, was to file a case before the international court. It paid off, and he won a landmark ruling that dismissed China’s sweeping 9-dash-line claim, affirmed Exclusive Economic Zones, and significantly reduced the areas in contest. 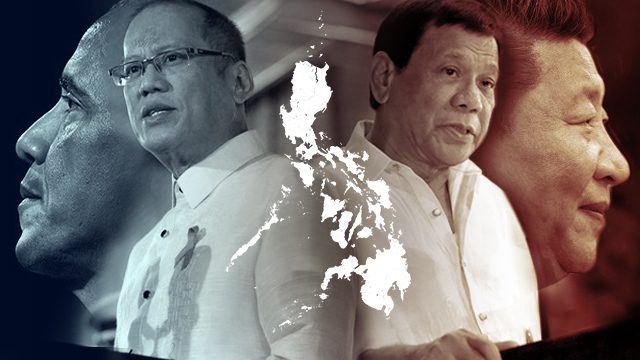 Duterte decided to set aside the ruling, however. To Duterte’s critics, this is his biggest sin.

Batongbacal said the arbitral ruling should be the centerpiece of relations with China. “He is giving China everything that it wants. It will reach a point where we have nothing to offer them. He’s squandering opportunities and leverage,” said Batongbacal.

Carpio dismissed government’s arguments that the victory is “useless” because China doesn’t recognize it. He cited how naval powers are enforcing the ruling by sending ships to conduct freedom of navigation patrols and overflights despite Chinese protests.

Carpio said the Philippines can use the ruling to leverage with China to set rules in the disputed waters.

If China continues to refuse to honor the ruling, he said the Philippines can go back to court to seek damages and do the following:

Carpio showed rare defeatism with regard to Mischief Reef, which the ruling also affirmed to be a part of the Philippine EEZ. “China spent billions of dollars putting up those structures and we cannot expect China to just abandon those very expensive reclamations,” said Carpio.

Instead, Carpio said the Philippines should work to enter into a convention with southeast Asian neighbors to affirm freedom of navigation beyond 12 nautical miles of disputed maritime features and then open the convention for the naval powers of the world to adopt. The ruling said no maritime feature in the South China Sea is entitled to 250-nautical mile EEZ.

Carpio went further to propose that all claimant states suspend territorial claims in the Spratlys and declare the area a marine sanctuary to allow it to rehabilitate after years of overfishing.

The region has pinned its hope on a Code of Conduct that China agreed to discuss with the Association of Southeast Asian Nations (ASEAN), seen by many as the holy grail for stability in the region. It defines how ships and planes can pass through disputed seas without provoking protests.

But delays continue to hamper the code nearly two decades since they agreed to set it up in 2002.

There are doubts about the ASEAN’s ability to assert itself against China. Carpio finds the limited coverage of the code to the Spratlys problematic, saying it should include Scarborough and the Paracels.

Batongbacal said the code will only likely deal with crisis prevention, not the root cause of conflict. “What is needed is a code of conduct that is consistent with the ruling. China has to moderate its behavior and pull back…in accordance with the parameters laid down in the ruling,” said Batongbacal.

However it is done, the talks need to show results – and soon. The alternative could be war, lest the new normal is accepted.

“They say great powers don’t fight over small rocks. But now the small rocks have become big fortresses. War is a possibility in the South China Sea. The question is, how big?” said Vuving, who outlined a strategy on restoring equilibrium in the region.

The South China Sea is a high-stakes game. But does Duterte inspire confidence that he knows how to play and where he’s going? – Rappler.com