How Duterte’s political style is hurting PDP-Laban in 2019

MANILA, Philippines – Parties of sitting presidents have traditionally enjoyed an edge over political rivals during elections. But such is not the case for ruling party PDP-Laban in the 2019 elections, owing to the style of its chairman, President Rodrigo Duterte.

With Duterte, a longtime mayor, bringing in his local political habits to the national scene, it came as no surprise that his support is not exclusive to PDP-Laban. Duterte is supporting and endorsing candidates outside the ruling party.

An insider agreed with this observation and told Rappler that they indeed lost their leverage under the current setup.

Political analyst Herman Kraft from the University of the Philippines said that while the President identifies as a PDP-Laban member, “party politics never really factored in the politics of Duterte.”

“It rarely (if it ever) does in local politics. It is a matter of the coalition built around the contenders for the mayoralty,” Kraft told Rappler.

In the past, candidates and politicians would want to join the parties of the sitting president. But now there seems to be no compelling need to join or coalesce with PDP-Laban because candidates could get Duterte’s attention and endorsement without going to such lengths.

Instead of going to PDP-Laban, politicians are now associating themselves with presidential daughter and Davao City Mayor Sara Duterte Carpio, whose regional party Hugpong ng Pagbabago is being swarmed by national politicians and candidates.

Politicians jumped ship to PDP-Laban after Duterte’s win, as was expected. At the time, Duterte’s party mates Senator Aquilino Pimentel III and Davao del Norte 1st District Representive Pantaleon Alvarez led the Senate and the House of Representatives, respectively. Their leadership of the chambers, however, was short-lived. Not even halfway through Duterte’s term, they were ousted and replaced by other Duterte allies, with Alvarez’s ouster led by Sara herself.

The two ousters took a toll on the party, leading to the departure of some congressional allies. At the same time, HNP was consolidating its forces even outside Davao, entering into coalitions with national parties for the 2019 elections.

Parties were coalescing with Sara’s HNP, even if PDP-Laban is the ruling party. In short, HNP was the group to beat in the eyes of politicians. Now, HNP has formal coalitions with at least 3 national parties and various regional groups. The President has also declared support for HNP, while doing the same for PDP-Laban.

Pimentel had downplayed HNP’s alliances, saying it had no implications on the ruling party.

On top of this issue, the PDP-Laban faced an internal conflict, with the emergence of a so-called rogue group. The Commission on Elections eventually decided against the other faction and declared Pimentel’s group as the legitimate PDP-Laban, but not without causing confusion among PDP-Laban members themselves, especially in the local scene. (READ: PDP-Laban struggles for unity, survival ahead of 2019 polls)

As if it’s not confusing enough to have two administration slates, Duterte is supposedly set to endorse his own, which sources said would be called Du It Pilipinas. The groups have more or less the same names, just with different permutations. 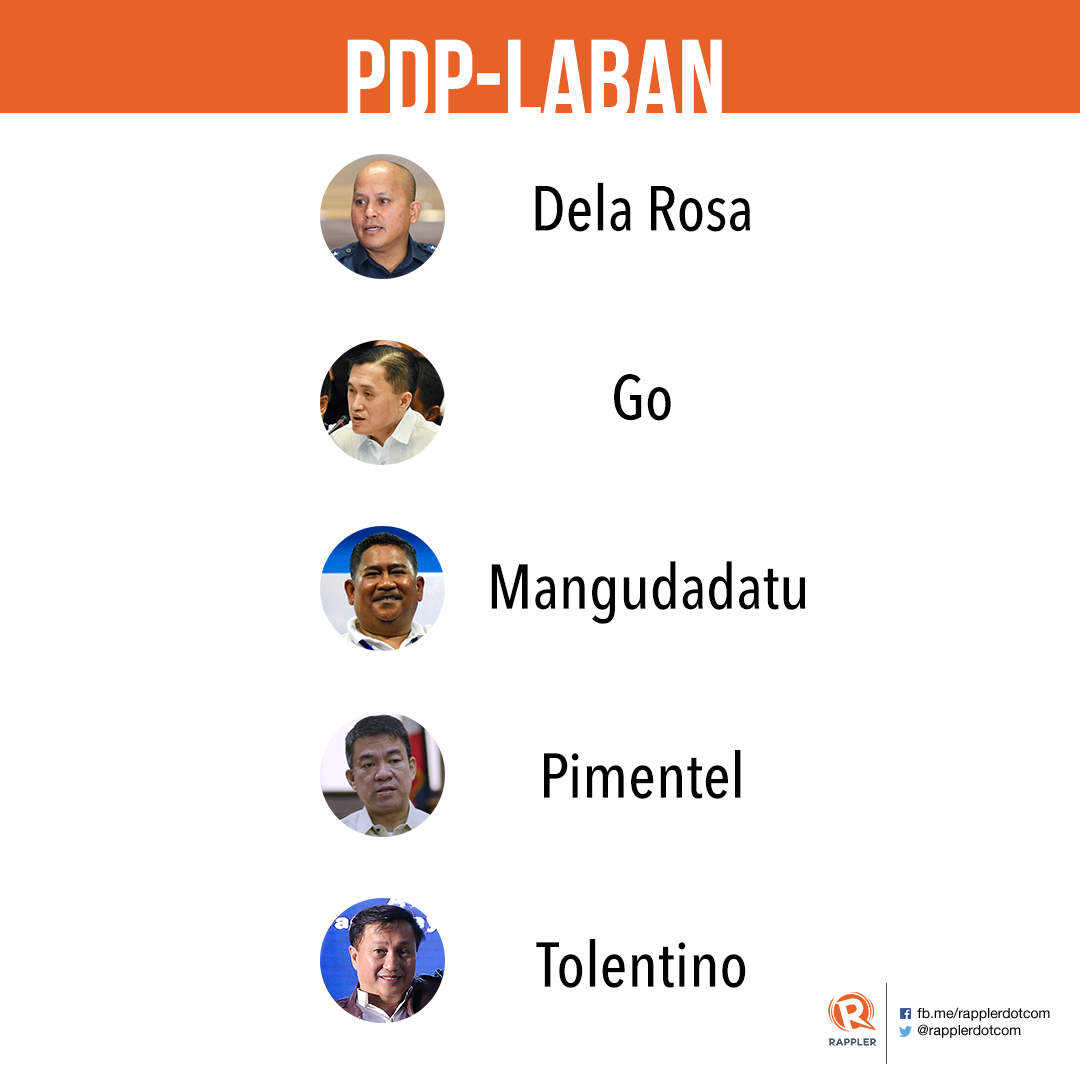 The HNP list, meanwhile includes a total of 13 candidates (originally 14 but former presidential spokesman Harry Roque withdrew from the race), which includes all 5 PDP-Laban bets. HNP is endorsing more than the number of senatorial seats up for grabs. 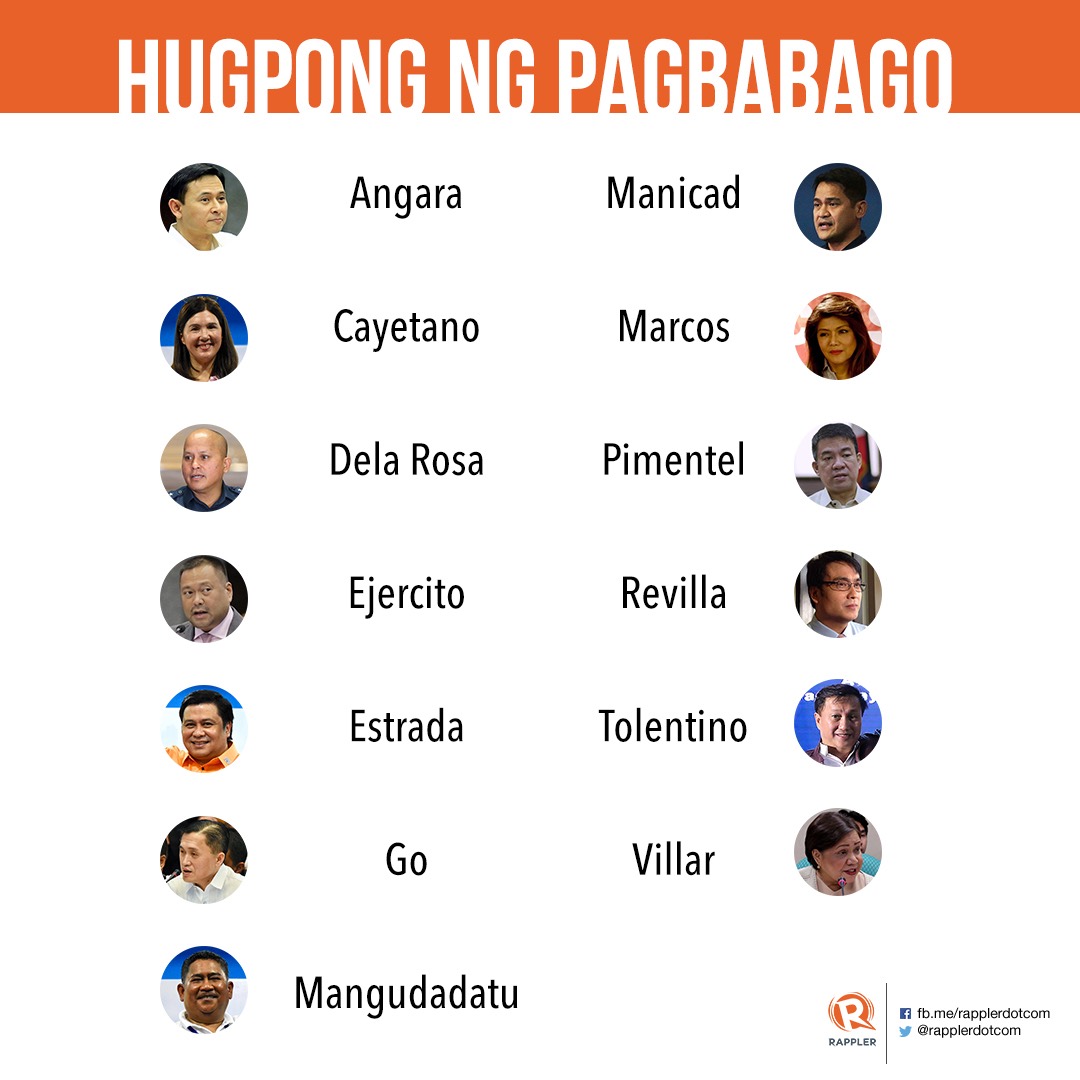 According to at least two sources, Du It Pilipinas has so far 10 names – 5 PDP-Laban bets and 5 HNP candidates – and possibly one senatorial aspirant, Freddie Aguilar, who ironically is part of the rogue PDP-Laban group. (READ: Duterte endorses Freddie Aguilar as senator: ‘He’s exemplary’)

It remains unclear if former senator Jinggoy Estrada would be included, too, considering Duterte publicly endorsed him on Saturday, February 9.

Asked how the supposed Du It Pilipinas slate would affect PDP-Laban, Pimentel told Rappler that he “has no idea about (the lineup).” 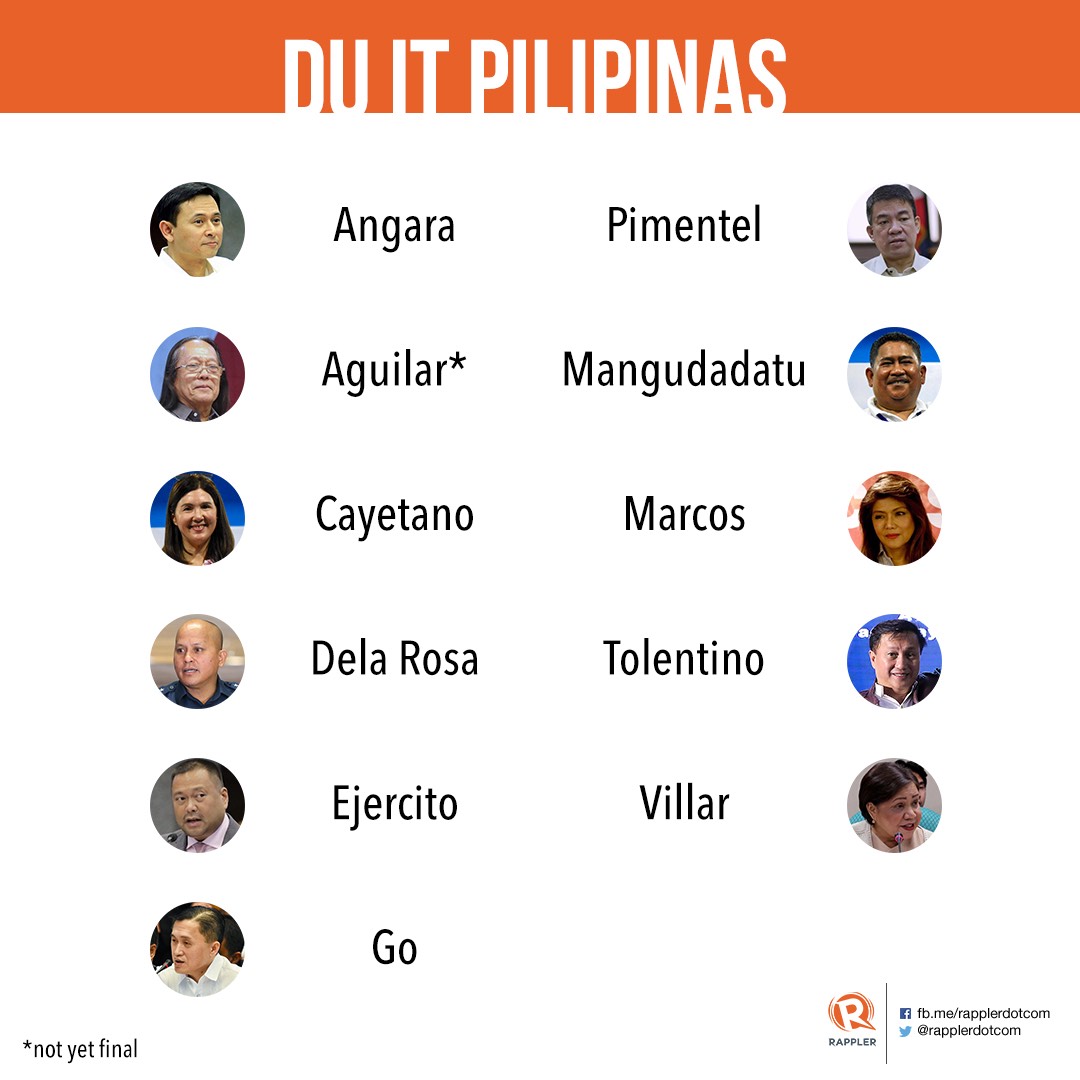 This, Kraft said, is “consistent” with Duterte’s “personalistic style.”

“I guess you could say that it is consistent with his personalistic style, endorsing individuals and more honest as far as not pretending to endorse based on party affiliations. It reflects on what he is familiar (and perhaps most comfortable) with,” Kraft said.

It is also symptomatic of the weak political party system in the Philippines, he added.

“It is actually more consistent with how Philippine politics is actually conducted. Political parties are little more than platforms for political coalitions for elections. That parties closely identified with President Duterte are presenting contending slates reflects how local political norms and structures in the Philippines, which are fundamentally personalistic in nature, have been superimposed on a feeble political party system which are also largely, if not wholly, driven by personalities at the national level,” Kraft said.

“The fact that it is about personalities is actually shown by the fact that the HNP is endorsing (13) candidates, not a “party” or even “political coalition” slate of 12. What is curious is how the Comelec spins this situation – or whether it will even be recognized as an electoral issue,” he added.

With all this, PDP-Laban took a hit in terms of leverage, influence, and control. While it is Duterte’s official party on paper, in reality it comprises only less than half of his own slate, Du It Pilipinas. It is also only a small part of the slate of the President’s daughter.

Pimentel denied that failing to field a complete lineup is a sign of weakness. He said it was the party’s deliberate choice to support only 5 bets to ensure efficiency and winnability. This is contrary to the dozens of names the ruling party earlier floated as possible candidates.

PDP-Laban’s situation and opinion are in stark contrast to how the Liberal Party conducted the midterm elections, considered the referendum of any administration, in 2013. (READ: How Team PNoy ran its 2013 campaign)

With then-president Benigno Aquino III, LP chairman at the time, enjoying high ratings, the party and its coalition were able to complete the slate. For a time, there was a fight between the administration and the opposition over the 3 guest candidates raking in numbers – Loren Legarda, Grace Poe, and Francis Escudero. In the end, the 3 chose to stay with Aquino’s slate. Pimentel was also part of the administration coalition in 2013 and ran under Team PNoy.

A high-ranking source who was privy to campaign affairs then, told Rappler: “Anong reason namin para di makabuo, lalo noong 2013? Wala (What would be our reason for not completing our slate especially in 2013? None).”

“If you don’t complete the slate, parang sinabi na ring di namin kaya at sumuko na kami na hindi iboboto ang kaalyado ng Presidente (it’s like you’re admitting that we could not do it and that allies of the President would not be chosen by the public),” added the source, who asked not to be named.

With Duterte enjoying continued popularity, the current setup certainly hurts the PDP-Laban slate and, even more, PDP-Laban as a party.

“President Duterte remains very popular and this would usually translate into his endorsement of a candidate for the mid-term elections being an additional factor that would favor the endorsee…. More importantly for PDP-Laban, it is hardly a ringing endorsement for the party…. Hardly anybody talks about the PDP-Laban slate as the slate to beat, the advantage of the incumbent,” Kraft said.

Pimentel, for his part, said the party “understands the President’s situation,” even as it has placed PDP-Laban in a difficult situation.

“We understand the President’s situation. He is the father of the nation. Hence he wants to be accessible to as many as possible. And people seek him out and he is a person who doesn’t want to disappoint or embarrass people who ask for help/support,” Pimentel said in a message to Rappler.

The ruling party has seemingly accepted its tough reality. Its members are fine as long as they have Duterte’s support, Pimentel said.

“That is his personality. Alam namin ‘yan. (We know that). What is important is that we have the President’s support, too. Happy na kami lahat doon (We are all happy with that),” the senator said.

With at least 3 administration slates and with Duterte endorsing his own, what then has become of the financial capacity of PDP-Laban?

Pimentel declined to comment. “There are topics which should be off limits,” he told Rappler.

However, in an interview with ABS-CBN’s Bottomline, Pimentel mentioned the lack of funds but did not elaborate.

A source admitted that unlike previous ruling parties, PDP-Laban is “not awash with money.” The same person added that the party stands by its belief that there should be no oligarch behind them.

On February 12, PDP-Laban will join the HNP stage in Pampanga in launching the campaign, sources said. It would then hold its own rally the following day in Bulacan.

Whether or not such setup is sustainable remains to be seen. At the end of the day, these parties, including PDP-Laban, would all depend on the President. – Rappler.com