MAP: Where P2.8-B cocaine ended up in PH over past decade Facebook Twitter Copy URL
Copied
In the past 10 years, at least 481 cocaine bricks have ended up in Philippine shores. We map where they were found.

Just on Tuesday, April 30, a fisherman found another 20 kilograms of cocaine off the shore of Lingig town, Surigao del Sur.

It’s a drug believed to be unpopular in the Philippines, a poverty-stricken country with shabu (methamphetamine) as its best-selling narcotic.

But the incident in Surigao del Sur is only one among the 32 or so coastal cocaine finds in the Philippines since 2009, according to police and news reports data compiled by Rappler.

Finding cocaine along Philippine coasts has become recurrent, especially between 2018 and 2019, that cops have started offering sacks of rice in exchange for surrendering cocaine bricks.

Rappler maps the discoveries below. We will update the diagram when more cocaine packs are found along the country’s shores.

The cocaine bricks did not just randomly float to shore.

All but one package was found in the eastern seaboard of the Philippines.

Eastern Samar and Camarines Norte are the provinces with the most incidents of cocaine finds along their shores, each recording 4.

Looking at the numbers per region, Caraga stands out with the most finds, accounting for 10 incidents. All of the region’s finds occurred only in the year 2019.

The biggest retrieval so far has been in Balangkayan, San Policarpio, and Llorente in Eastern Samar, where in December 2009, cops and locals found a total of 80 bricks of cocaine worth P400 million.

Smallest finds weighed only one kilo, which numbered 11, or a third of all the discoveries since 2009. Philippine authorities expect to pick up more as the global drug trade continues.

Where did they come from?

Even authorities are still trying to figure the origin of these cocaine bricks. But they have floated a few theories.

Based on information he has gathered, Aquino said that the drugs could have come only from either the Golden Triangle in Southeast Asia or the Sinaloa drug cartel based in Mexico.

The Golden Triangle is the area where the borders of Thailand, Laos, and Myanmar intersect, a place believed by authorities to be a lawless patch of land where drug syndicates thrive, manufacturing narcotics. Syndicates could have used the Philippines as a transshipment point by dropping off cocaine near its shores for later recovery.

The other theory is that the discovered cocaine came from drug cartels in Latin America – either in Mexico or Colombia.

Both ideas, Aquino said, are hinged on the belief that the Philippines is a transshipment point for cocaine – which means that the drug is not actually sold in the Philippines, but is merely passing through and headed towards other countries where the drug could fetch higher prices.

Caraga police have a clue 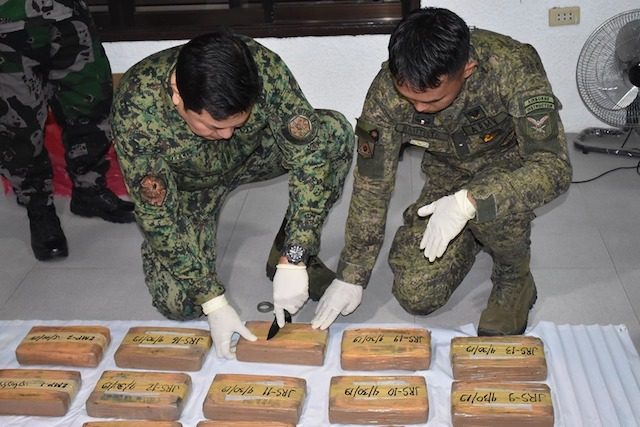 In a phone interview with Rappler on Wednesday, May 1, Caraga police chief Brigadier General Gilbert Cruz said the cocaine packs hauled in their region are most likely from Colombia.

“Colombia [cartels] are the suppliers for Europe, Australia, and Japan. That’s where cocaine is shipped, our east, which is the east,” Cruz told Rappler in a mix of English and Filipino.

Citing information supposedly from the Australian Federal Police and the Australian Coast Guard, Cruz said there were cocaine traffickers chased at sea in 2018 in Australia.

The smugglers apparently had to speed up their vessel and get rid of evidence so they dumped hundreds of kilograms of cocaine into the ocean.

The cocaine that cops have retrieved, Cruz said, had been floating in the ocean for around a year, which is why the discovered bricks are thickly covered in moss. This has also led Cruz to join Aquino in declaring that the Philippines remains, at most, a transshipment point for cocaine.