Bong Go: President Duterte’s ‘eyes and ears’ in the Senate 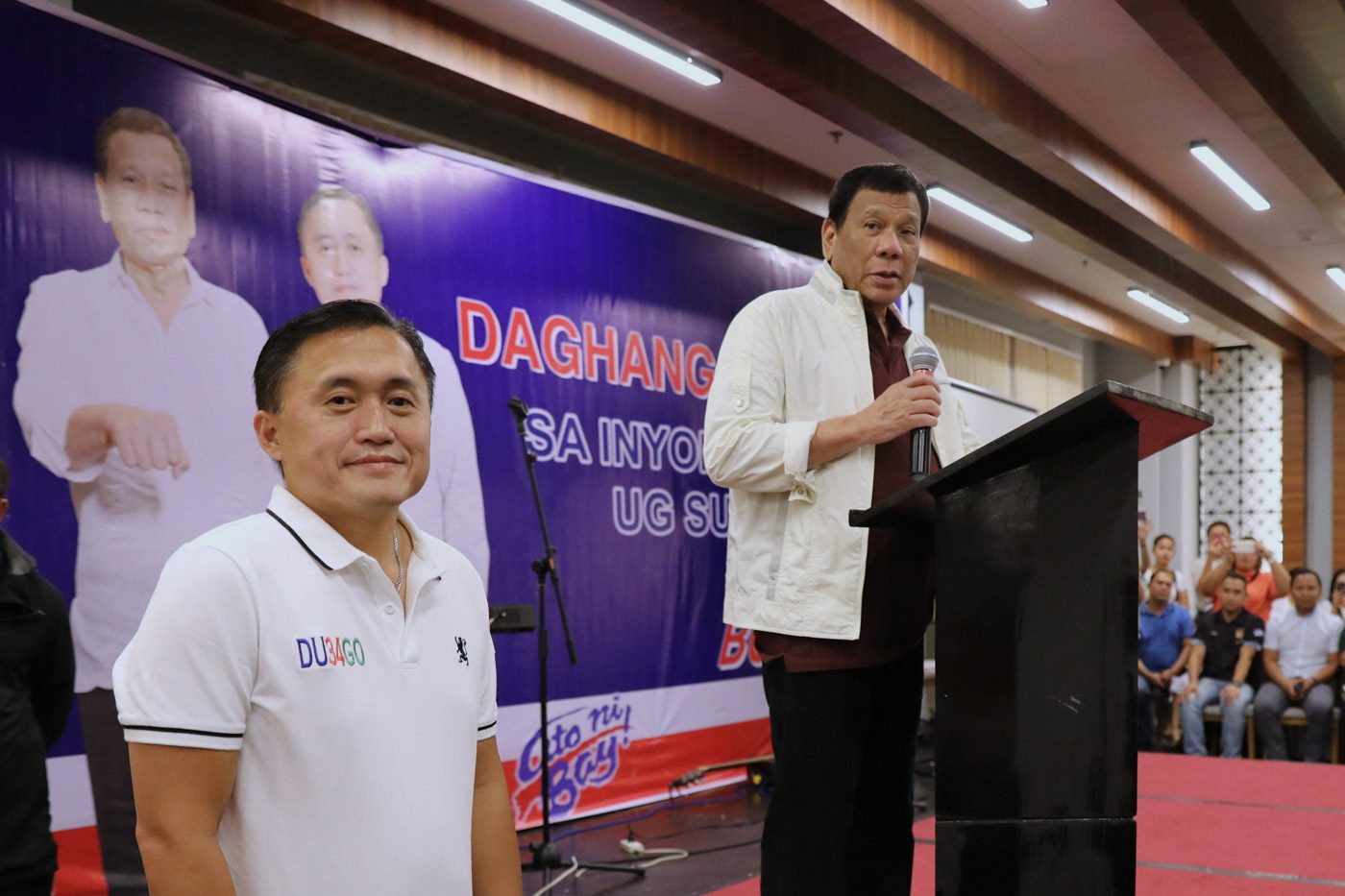 MANILA, Philippines – Christopher “Bong” Go has come a long way from being President Rodrigo Duterte’s longtime aide to a senator of the republic. But one thing remains: Duterte could rely on Go wherever he may be.

From working behind the scenes, Go was thrust into national prominence in 2016 following Duterte’s victory.

Just 3 years later, Go’s rise has been unstoppable. He is now expected to become the Senate’s “direct line” to Duterte and the latter’s eyes and ears in the chamber. Indeed, Go is the undisputed gateway to the President and Duterte’s most trusted man.

This, however, is not purely beneficial for the Senate, analysts pointed out. In an ideal world where the 1987 Constitution is strictly followed, institutions must be greater than personalities.

His entry to the Senate is sure to affect the internal dynamics, as well as the relationship between Malacañang and the chamber.

Just how exactly will Go, a fiercely loyal presidential assistant, navigate the waters of the legislature?

Pimentel recalled that when he was Senate president, he would coordinate with Go, then the Special Adviser to the President.

“Actually, smoother na ang relationship ng Senate and Malacañang, we have a direct line. When I was Senate president, I would call Bong Go to coordinate. We now have Bong Go here with us, so smooth na,” Pimentel told Rappler in an interview.

Political analysts Jean Franco and Gene Pilapil from the University of the Philippines said there would be easier communication between the two branches.

In his campaign speeches, Go vowed to be the public’s “bridge” to Duterte, as he also promised to “continue” what the President started.

But in the context of the Senate, this is “not so good,” Franco said, as everything Go does or says will be linked to the President. There is little to no problem for now, as Duterte enjoys high ratings. However, it would be a different story if and when the Chief Executive’s ratings plummet.

“Sa legislation, it’s positive because they have a very personal relationship. Ang mahirap d’yan (What is difficult there is) how can he dissociate himself from the President. I’ve seen it happen in previous senators [who are closely tied to another politician],” Franco said.

To dissociate from the President is something that is hard to imagine for Go, who even said he would go to jail with Duterte.

Go owes his political life to Duterte. Pilapil said the senator-elect is ”not only deeply beholden to the President, but is a creation of Duterte.”

The ties between Go and Duterte have led to expectations that he would be a blind follower in the Senate.

Go practically denied this in separate interviews, as he said he would be an “independent” senator. At the same time, however, he said he would support Duterte’s policies because he believes the President only wants the best for the nation.

He found an ally in Senate President Vicente Sotto III, who endorsed him during the campaign. (READ: Tito Sotto: Bong Go won’t be Duterte’s blind follower in the Senate)

Under Duterte, lawmakers have lamented the repeated vetoes of approved bills. In just 3 years, Duterte rejected 7 measures. Many senators blamed the inefficiency of the Presidential Legislative Liaison Office, headed by Secretary Adelino Sitoy.

But with the impending entry of Go, some senators are hoping for change.

Majority Leader Juan Miguel Zubiri said they had complained to Go about the vetoes. Go supposedly promised his soon-to-be colleagues that it won’t happen again.

(We complained to him about the veto of certain bills. He told us it will not happen again because of course he can assure the senators that they will know immediately if the President is okay with that bill or if the Cabinet supports it.)

“I think it’s a welcome development. You cannot discount the fact that he’s very close to the President so malaking bagay po ‘yan sa amin (so it’s a big thing for us) in terms of measures that might be vetoed in the future,” he added.

Problems with the PLLO are not unique to the Duterte administration. During the time of former president Benigno Aquino III, senators also had an issue with then PLLO chief Manuel Mamba. Mamba and former Senate president Juan Ponce Enrile were not in good terms, owing to local politics in Cagayan province.

But during Mamba’s term, it was also a PLLO official – Undersecretary Antonio Gallardo – not a sitting senator who coordinated with the chamber.

The PLLO was created in 1987 and is mandated to promote “legislative initiatives and other administration-sponsored priority policy reforms” through collaboration with Congress.

With the senator-elect’s loyalty to Duterte, it would come as no surprise if he would become Duterte’s eyes and ears in the Senate.

“You have an incoming senator who is the eyes and ears of the President. Certainly information would flow faster….But I’m not sure if it’s a clear package of benefits. The drawback is having the President’s eyes and ears in caucuses, in private meetings. It’s like having a CCTV there for senators,” Pilapil said.

Franco shared the same sentiment and said senators might “calibrate” what they are going to say. This is especially true as the 2022 presidential elections draw near.

“In caucuses, I am not sure if there is an executive privilege. But they’d probably calibrate what they are going to say….especially on 2022 matters. They will calibrate responses to Bong Go, because parang anak na ni Presidente si Bong Go,” Franco said.

Senate President Pro-Tempore Ralph Recto said it is indeed possible but said he “would rather focus on the positive” effect of Go’s entry.

Asked about it, Pimentel said senators should just “watch [their] words.”

“Eh ‘di ingat sila kung ayaw nila umabot, ganun lang ‘yon. You can speak your mind sa caucus, ‘pag medyo takot takot ka na ayaw mo umabot, watch your words,” Pimentel told Rappler. (Then they should be careful if they don’t want it to reach the President, that’s just it. You can speak your mind in the caucuses. But if you’re afraid and you do not want it to reach him, watch your words.)

The Duterte administration has been the subject of several Senate investigations in the 17th Congress from 2016 to 2019.

Now that Go is set to join the chamber, will he be out for revenge? In a radio interview, Go warned Trillanes that he would go after the opposition senator, who is set to end his term in June. The threat came after Peter Joemel Advincula or “Bikoy” recanted his drug allegations against Go and Duterte, and accused the opposition of heading a destabilization plot.

“Pasalamat rin ako kay Trillanes, kung hindi n’ya ako tinawag d’yan baka hindi ako naging senador ngayon (I also thank Trillanes. If he did not include me there, I may not be a senator now),” he added.

The Senate conducted a probe into Go’s intervention in a multibillion frigates deal for the Philippine Navy. Go denied it but Duterte later on admitted having a role. (READ: DOCUMENTS: How Bong Go is linked thrice to frigates deal)

In the 18th Congress, Go is set to head the health committee – a panel he specifically requested, owing to his campaign platform of “Malasakit Centers.”

Whether or not Go would use his newfound position of power to run after his critics remains to be seen.

But with Go enjoying the full backing of popular Duterte, the senator-elect has a lot of political capital to his advantage. – Rappler.com