How the business community copes with Duterte’s politics

MANILA, Philippines – One of the Philippines’ richest businessmen was recently asked what he wants to hear from President Rodrigo Duterte during his 4th State of the Nation Address (SONA).

He simply gave reporters a smile, then an awkward silence followed. Another reporter went on to ask if he had a wish list of reforms the President needs to accomplish in the coming years that would benefit the business community.

The businessman, who packs one of the most diverse business portfolios in the Philippines, was visibly uneasy with the question. He was ready to leave the reporters circling him and simply said, “Mahirap magsalita (It’s hard to speak).”

Reporters quickly shifted the topic and asked about the future of his many companies, to which he happily updated journalists about the latest business deals.

In another event held a couple of months ago, a member of one of the wealthiest families in Asia was also asked about Duterte’s crass rhetoric and whether it has affected foreign investor sentiment.

The businessman, who heads one of the oldest and largest conglomerates in the Philippines, said that investors were happy with the peace and order situation in the country. This is despite the  thousands killed in the bloody drug war, which has registered an extremely low prosecution rate. (READ: PH drug war killings reach ‘threshold of crimes against humanity’ – report)

Reporters brave enough to push a little more asked whether Duterte’s sexist remarks and cursing have turned off businessmen. He smiled for around 3 seconds before saying, “Well, (long pause) don’t quote me on this!” The room burst into loud laughter, which also signaled the end of the press conference.

Meanwhile, a businesswoman who comes from another wealthy family was also asked about Duterte’s rhetoric. She said that Duterte was simply a man of many contradictions but “gets the job done.”

“Let’s leave it at that,” she said, before ending the interview.

Tycoons have always been averse to answering politically-charged questions. At the same time, this evasiveness, to an extent, has made journalists hesitate asking these questions for fear that these people would ignore their text messages and interview requests.

Such questions are often answered by interest groups and civil society organizations instead, but are seldom asked in business briefings.

“Iba talaga ang mundo ‘nyo ‘no  (You really live in a different world, don’t you)?” a justice reporter commented.

It’s clear: the wealthy would rather keep business and politics separate.

But how long can they tune out from all the political noise? And can business and politics truly be separate?

Business chambers and associations have generally been upbeat and supportive of Duterte. Organizations have long hailed his economic team and their efforts to improve the business environment.

However, surveys that grant anonymity paint a different story.

In the Business Expectations Survey (BES) by the Bangko Sentral ng Pilipinas, firms are generally optimistic about the economy and doing business, but not as much as under the previous administration.

The BES, which has respondents from the top 7,000 corporations, showed that under Duterte, companies were the most optimistic when he first came into power in 2016. Since then, business confidence has slipped, even going as low as 27.2% during the 4th quarter of 2018 amid high inflation. That figure was not seen since 2009’s 22% under the Arroyo administration.

This is not to say that the survey is all about Duterte’s leadership style, as it also factors in external forces, domestic developments, and even the season. But it is quite telling how companies are viewing the business environment under his watch.

While some push through with doing business in the Philippines, some have shelved their plans indefinitely.

A consultant who does due diligence and research for a Japanese logistics company told Rappler that her client decided not to invest in the country, not only because of Duterte’s rhetoric, but also because his uncertain policies.

“The client was initially attracted to the country’s consumption-driven economy, which is good for a logistics firm. But the company felt that other countries like Vietnam are better locations,” the consultant said.

Meanwhile, Jun Calaycay, assistant vice president and head of research and engagement of brokerage firm Philstocks, told Rappler that while it is good to do business in the country, there have been uncertainties that the business community can no longer ignore.

“So far, most issues have been on the political, on the governance side, less of business. But whenever the President speaks, there is a disjoint,” Calaycay said.

“The threat coming from the President is that you never know what the next move is. When he speaks, it seems that it is not policy but just testing the waters and see the reaction [of people],” he added.

While prominent business figures avoid politically-charged questions, business chambers, to an extent, have spoken out against social injustices during Duterte’s term.

The Makati Business Club (MBC) had the most strongly-worded statements among all business groups. The MBC spoke out against the bloody drug war, the hero’s burial of dictator Ferdinand Marcos, the impeachment of former chief justice Maria Lourdes Sereno, and the arrest of Rappler chief executive officer Maria Ressa.

“A brave and free press is an ally in the fight against corruption that we and the government espouse in order to encourage investment badly needed to generate employment and wealth creation that is truly inclusive,” the MBC said.

The American Chamber of Commerce (AmCham) in the Philippines said in 2016 that the drug war was a cause of concern for businesses.

“The increased number of killings during the heightened anti-drug campaign is harming the country’s image, as portrayed by international media, and some investors are now asking whether this campaign reduces the rule of law,” AmCham said.

Tara Joseph, president of AmCham Hong Kong, said that businesses generally do not want to meddle in politics. But once the political cracks into the business sphere, groups start to speak out.

Joseph said that chambers aim to foster trade and ensure the free flow of data, and make sure that the rule of law is followed. If something impinges on those values, Tara said that AmCham would likely speak out.

“It [speaking out] does make a difference beceause the people hear it, the government hears it,” Joseph said.

“I can respect chambers who don’t want to mix business and politics, it can get scary…but I guess we’re the biggest international chamber – we have lots of businesses in Hong Kong, we have the ability to make our voices heard,” she added.

While business groups carefully craft statements on political matters, issues pertaining to the economy and policies that affect business get them all fired up.

The Philippine economy has been performing well, but not at the same level as the previous quarters.

In the 1st quarter of 2019, the country’s gross domestic product (GDP) broke the 6% streak as it slowed down to a 4-year low of 5.6%. Politics in the budget caused the delay.

While the growth was still respectable, former socioeconomic planning secretary Gerardo Sicat noted that there is much more to do to improve the “quality” of growth. He recommended that the country open up more to foreign investors.

“It is now time to embrace greater openness toward more foreign direct investments in our economy. In part, many of our businessmen are much more capable now to deal with more competition,” Sicat said.

Unfortunately, investment figures and competitiveness, so far, have been lackluster.

The government’s economic team had projected $10.4 billion in FDIs for 2018, which means it missed its target by $600 million.

The picture looks even more disappointing compared to regional peers.

In the competition for foreign investments, the Philippines is outshone by the likes of Indonesia and Vietnam. Thailand has even overtaken it in 2018. (READ: [ANALYSIS] The real score on foreign direct investments)

So why are investors not flocking to the Philippines? Businessmen point to 3 things: taxes, wages, and red tape.

Trabaho bill. Businesses claim that the economic team’s push for the Tax Reform for Attracting Better and High-Quality Opportunities, or Trabaho bill, will hurt businesses and ironically lead to job losses.

The Trabaho bill aims to reduce corporate income tax, while at the same time removing some of the preferential or lower corporate tax rates. The Department of Finance said that the measure won’t take away incentives, but ecozone groups are not buying it.

“To remove or even dilute tax incentives granted to locators now would risk the loss over time of millions of jobs and investments that would otherwise have been committed to the Philippines,” economic zone business groups said.

Endo and 14th month pay. Foreign investors are also reportedly spooked by Duterte’s signing of the security of tenure act and a bill that seeks to require businesses to dole out a 14th month pay for employees.

George Barcelon, chairman of the Philippine Chamber of Commerce and Industry, said that these two measures are more alarming than the Trabaho bill.

“In Singapore, they don’t have [those laws]. The economy is good now, but if these proposals push through, it would be very bad,” Barcelon said.

Red tape. It is awfully hard to set up shop in the Philippines. Tons of paperwork, legal limitations, as well as corruption, are just some of the boulders that investors have to move to do business.

The Philippines is 124th out of 190 economies in the World Bank’s 2019 Ease of Doing Business report, largely due to higher business registration costs and the lag in inspecting imported goods.

Meanwhile, the 2019 World Competitiveness Ranking of Swiss business school International Institute for Management Development (IMD) ranked the country as 46th out of 63 countries. 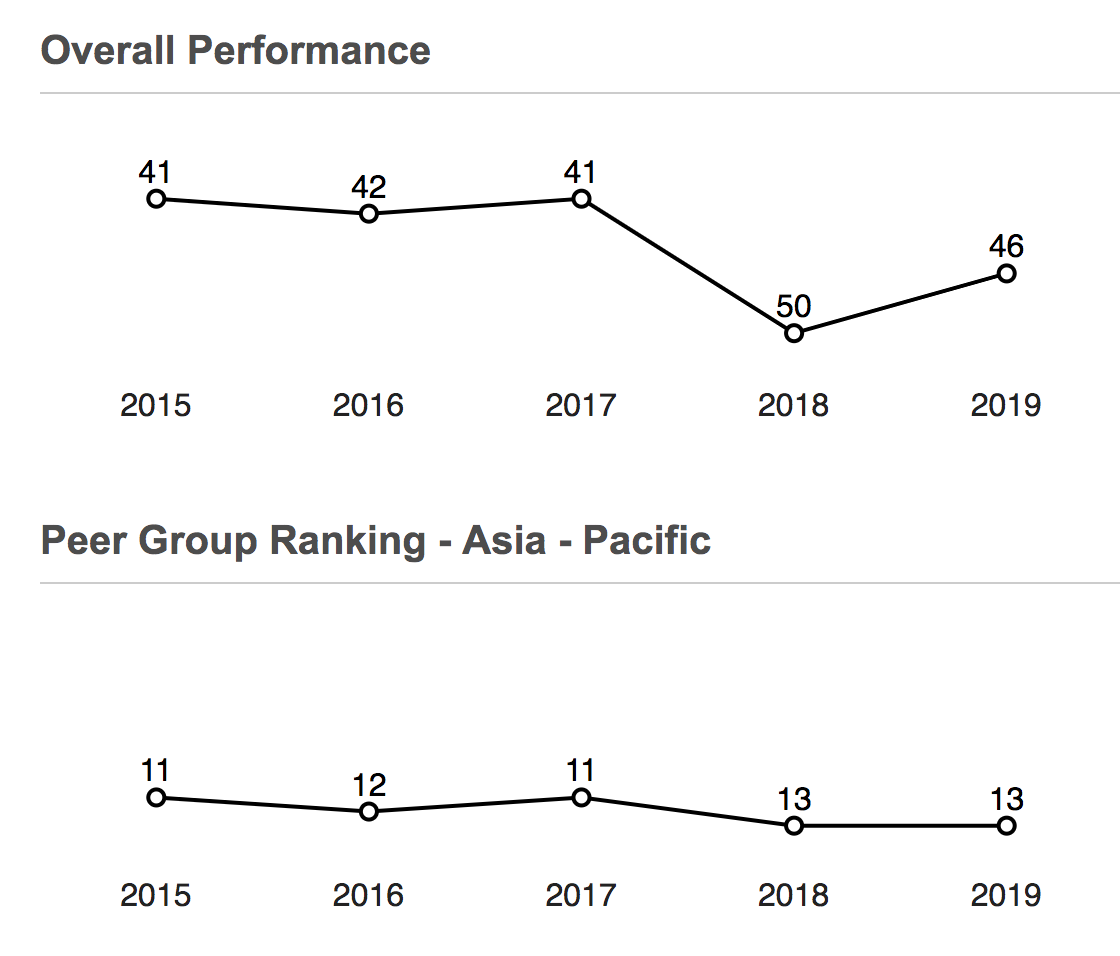 The government signed on Wednesday, July 17, the implementing rules and regulations of the Ease of Doing Business law, over a year after its enactment.

Business groups welcomed the development, as it would greatly reduce the number of steps in setting up a business and help spur economic growth.

Despite these concerns, business groups openly support Duterte and most have not issued statements critical of his leadership.

Perhaps they are keeping a closer eye on his economic team. After all, Duterte once admitted that he knew very little about economic affairs and just hired people from the business sector to do it for him.

What about the cursing and the killing? So long as it’s business as usual, it seems that we won’t hear much from them anytime soon. – Rappler.com