MANILA, Philippines – With the Duterte government backing him, Peter Joemel Advincula has become one of the country's most powerful storytellers.

So potent is his tale that it has given flesh to a complaint of inciting to sedition against the country’s Vice President Leni Robredo, along with other recognizable figures of the opposition Liberal Party (LP).

The Department of Justice (DOJ) started on Friday, August 9, its preliminary investigation into the inciting to sedition complaint against Robredo, two incumbent senators, two former senators, one former congressman, a former Cabinet secretary, 6 senatorial candidates, and the former head of the Catholic Bishops Conference of the Philippines, among others.

The police Criminal Investigation and Detection Group (CIDG) seeks to jail Robredo and the key opposition members for up to 6 years over what they call “Project Sodoma,” a supposed destabilization plot against the Duterte administration with Advincula as one of its pillars.

Lawyer Larry Gadon, himself a former senatorial candidate, also floated the idea of impeaching Robredo on the basis of a possible indictment from the DOJ, and not even a conviction.

Much of it will depend on the story of the man who came to be known as "Bikoy."

Since 2016, Bikoy’s story has altered and morphed, its characters changing circumstances and motivations.

Before taking him in as their star witness, police chief Oscar Albayalde described Bikoy as an “information peddler.”

We track his story beginning December 2016 and list the most glaring holes in his accounts. It begins with a sensational tale set in an underground room in a Bicol resort and a made-for-movies account of CCTV footage catching no other than the Philippine president supposedly taking an envelope and flying off in a private plane.

Under CIDG custody, Advincula has now discarded the entire underground story, and has pivoted completely to Project Sodoma against the opposition.

To see the changing testimonies of Advincula, press, hold, drag to the left or to the right, and release the sliders in the middle of the illustrations. 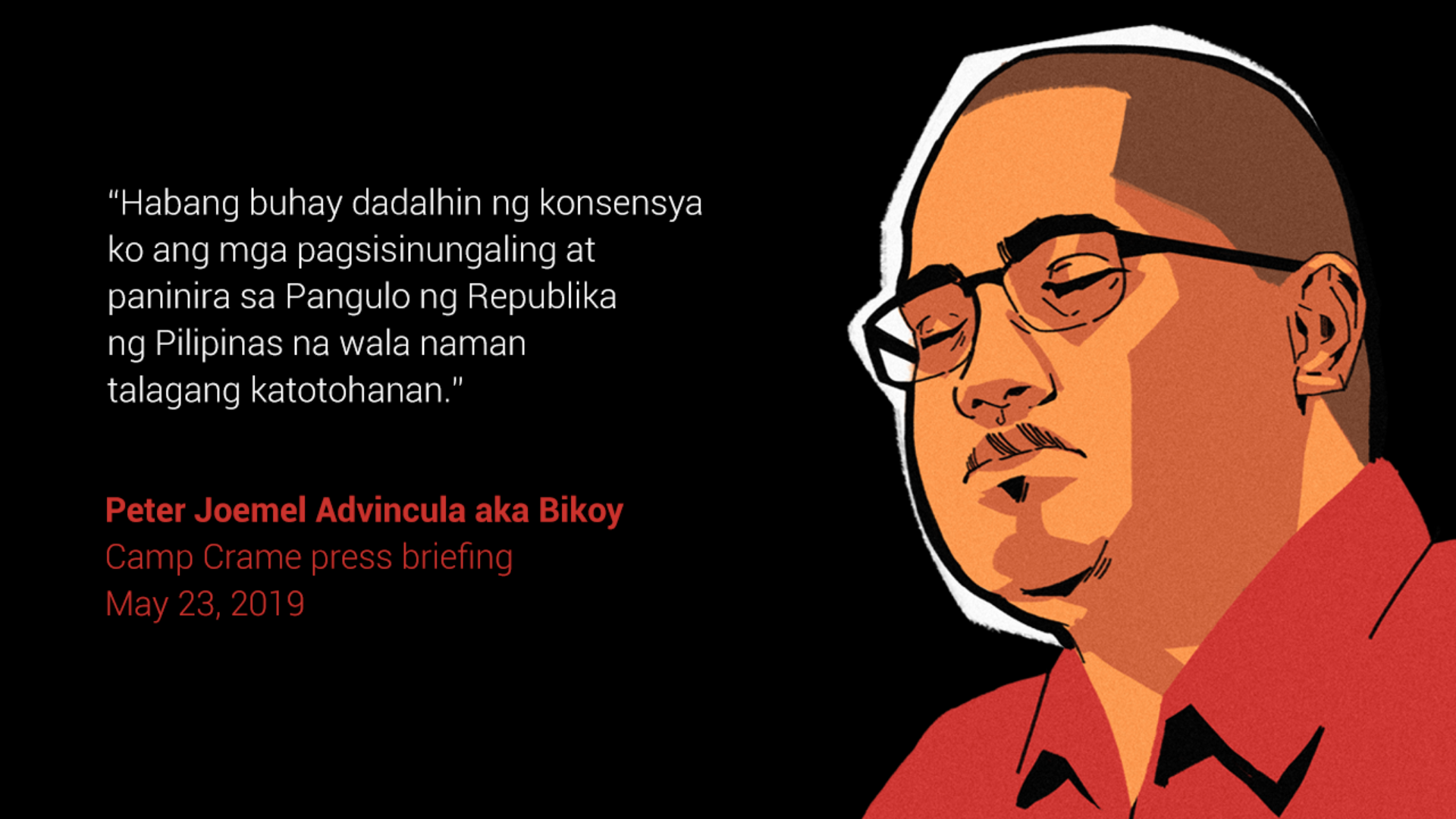 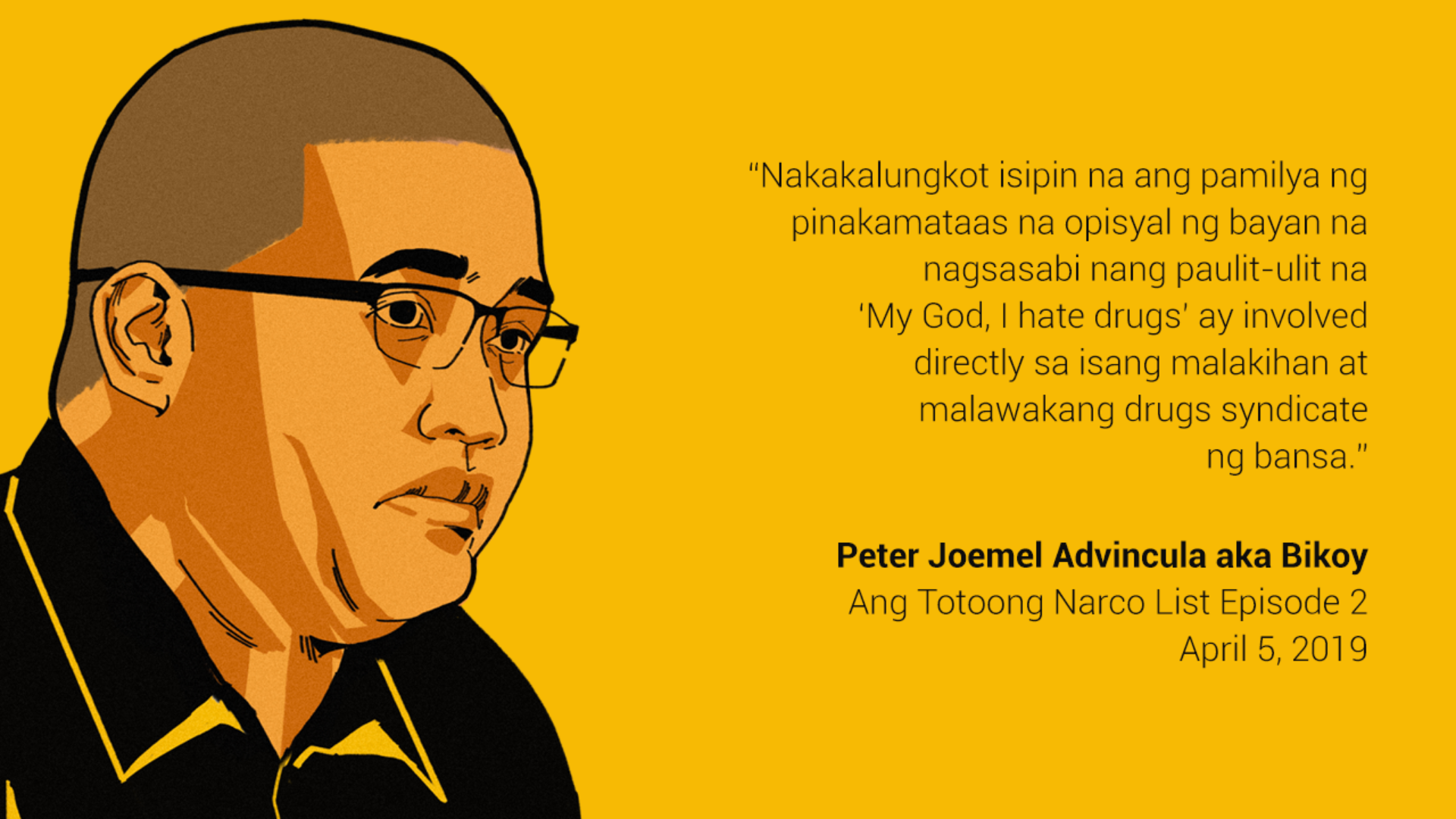 I. Underground room in Misibis Bay

Back in 2016, Advincula was just one of thousands of prisoners inside the New Bilibid Prison. He was serving a 6-year sentence for estafa handed down in 2012. By December, he had an idea for a way out.

He reached out to the office of Senator Vicente “Tito” Sotto III, and told them the story of how he met Bicolano business tycoon Zaldy Co.

Advincula said Co hired him to be a technical man for the so-called Quadrangle Drug Group he claimed was based in Misibis Bay resort in Bicol. There, Advincula was supposedly given access to the CCTV room of underground quarters of the syndicate he called the "Central House."

Advincula also told Sotto’s team that aside from minding the cameras, he was also a leader of a drug delivery team.

What he claimed to have seen in the monitors could be damaging to any presidency: that in April 2011, former president Benigno "Noynoy" Aquino III, his justice secretary at the time, Leila de Lima, his executive secretary Paquito Ochoa Jr, and Mar Roxas paid repeated visits to the syndicate’s headquarters.

(I saw through Camera 36 of our CCTV footage in the syndicate’s technical room that Elizalde Co handed over two brown envelopes to former president Noynoy Aquino, who then handed them to undersecretary Ricardo Puno...That afternoon, President Aquino left Misibis Bay, aboard a private helicopter owned by Elizaldy Co.)

At the height of the Bikoy issue in May 2019, Sotto came out to say Advincula had approached him in 2016 but that he found his claims suspicious.

During that time, De Lima was being investigated by the House justice committee for supposed participation in the drug trade inside Bilibid. Her bodyguard Ronnie Dayan was her alleged bagman.

Advincula was never invited as a witness in the 2016 public trial of De Lima, his name unknown until he became Bikoy. 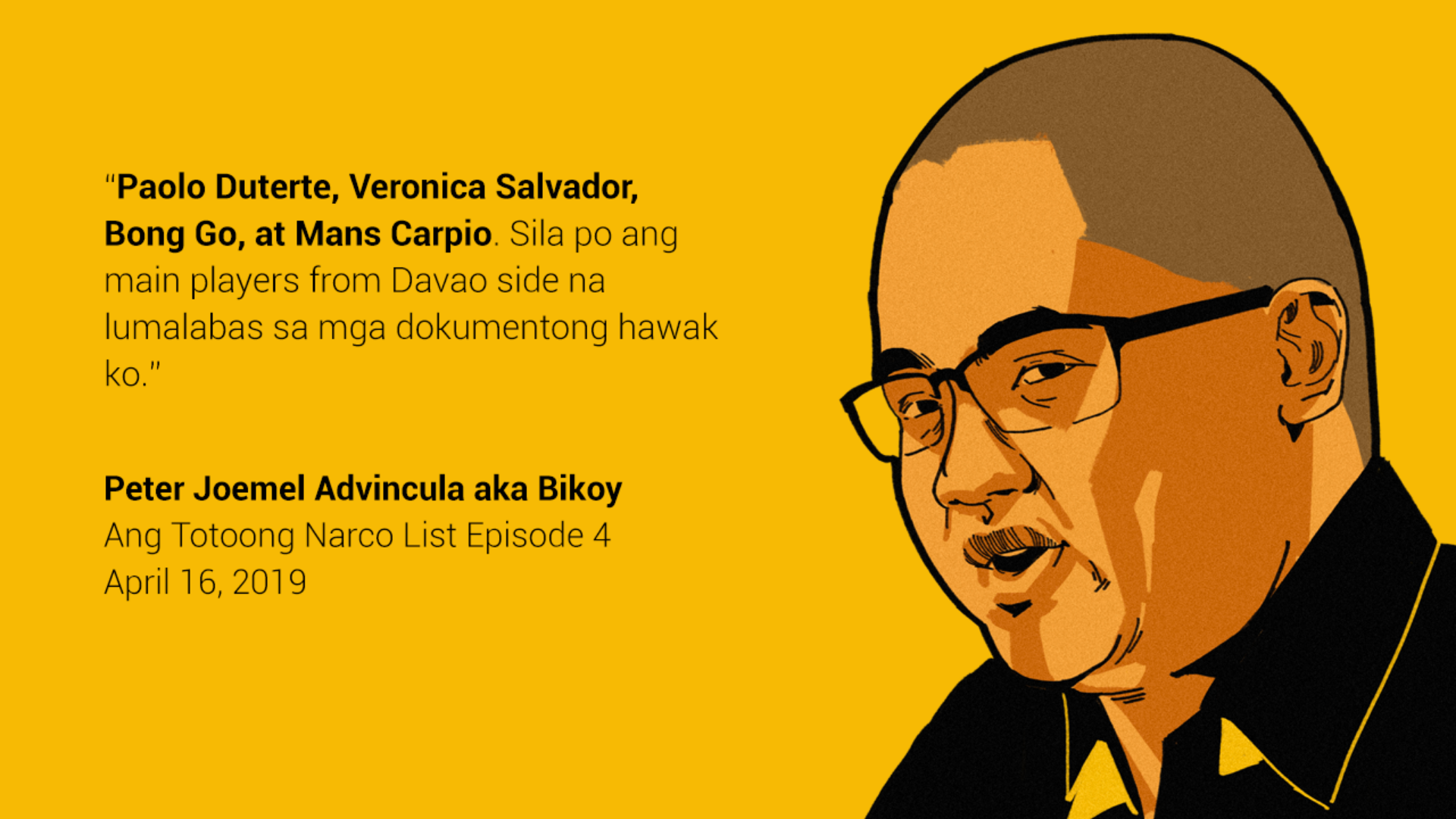 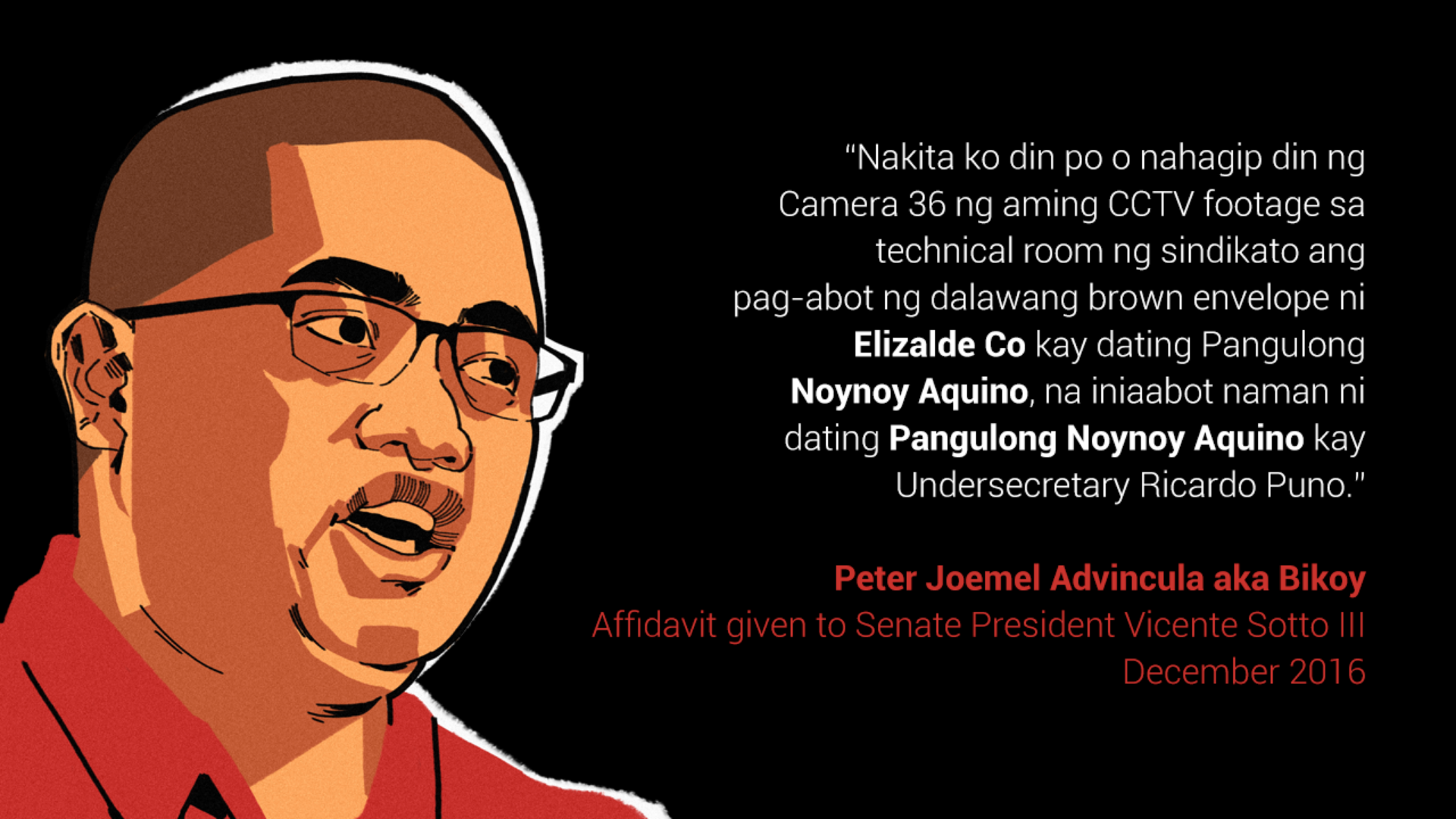 This anti-Aquino administration narrative was overhauled in 2019, when Advincula assumed the character he is most known as today. He was already a free man, but he said he felt he needed to say something about the Duterte administration.

He shrouded himself with a hood, spoke in the safety of shadows and called himself “Bikoy.”

In this new story, Advincula introduced himself as a former member of a Bicol-based “Quadrangle Drug Syndicate,” but this time he claimed to be in charge of managing financial documents and scanning supposed tattoos that senior syndicate members bore to claim their monthly shares in drug money.

He retained Ochoa, Puno, and added former Aquino cabinet secretaries Proceso Alcala and Ramon Paje as cast members. But he went on to hurl accusations against people close to President Rodrigo Duterte.

“Paolo Duterte, Veronica Salvador, Bong Go, at Mans Carpio. Sila po ang main players from Davao side na lumalabas sa mga dokumentong hawak ko (From the documents that I hold, they appear to be the main players from the Davao side),” Advincula said in episode 4 of the video series, calling them part of the so-called Tausug drug group.

Advincula claimed that he saw Paolo Duterte and Go inside Misibis Bay repeatedly, and that he himself scanned their supposed syndicate tattoos.

He again accused Bicol tycoon Elizaldy Co of keeping the drug syndicate in his Misibis Bay resort, and then accused other Bicolano politicians of being part of the Quadrangle Group, namely: 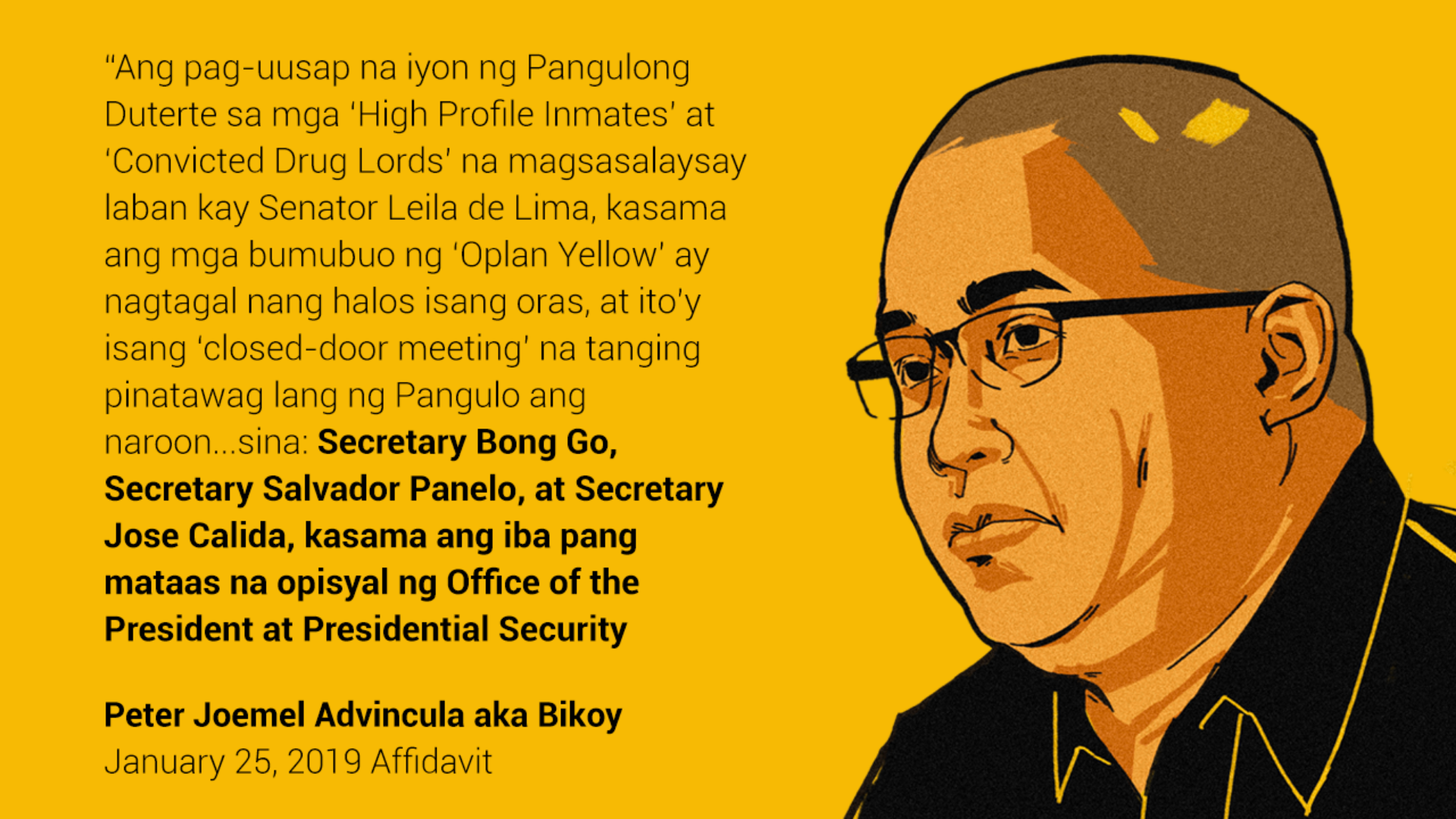 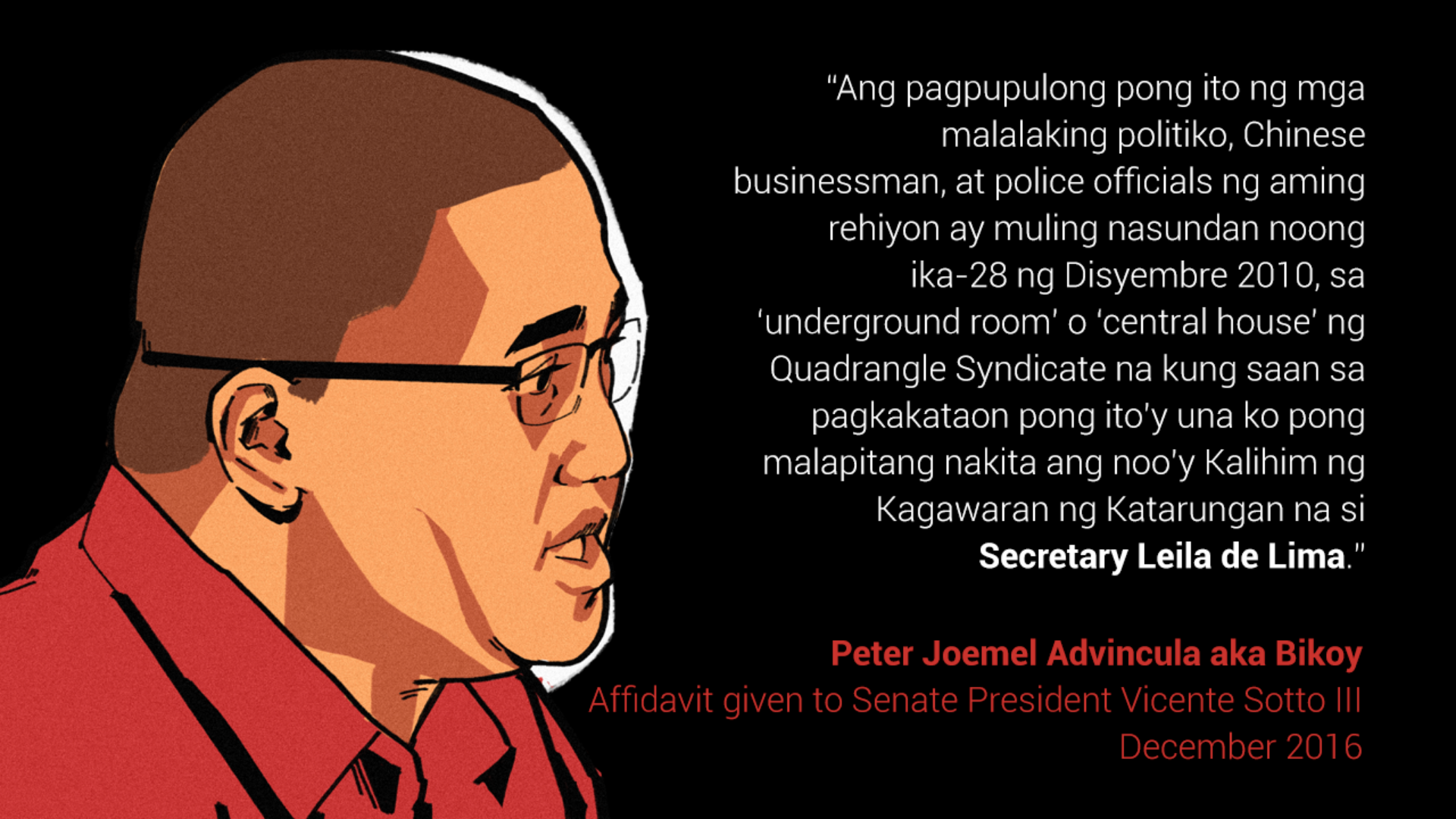 His accusations in the video are only part of a longer unsigned affidavit by Bikoy and obtained by Rappler.

(In every meeting of the patrons and patriarchs of the Quadriangle Central House, there was Paolo Duterte, Bong Go, and James Baay, with other Chinese nationals, businessmen, and high-ranking police officials of our region and Davao City, who accompanied Paolo Duterte.)

He expanded it to another narrative, which included "Oplan Yellow" in which he claimed to have seen President Rodrigo Duterte himself inside Bilibid during his detention, plotting drug charges against his fierce critic De Lima.

Advincula said in the affidavit that he was convicted of large-scale illegal recruitment that sent him to Bilibid on May 27, 2016.

Advincula claimed to have been part of a secretariat in the Inmate's Complaints Information and Assistance Center (ICIAC) of Bilibid's Medium Security compound, where he said, he prepared some "Oplan Yellow" documents.

(At times, my companions and I from the technical secretariat called the numbers to give updates and situationary developments and additions about the scripted sworn statements we were preparing for the high-profile inmates and convicted drug lords against Senator Leila de Lima.)

(On Saturday, in the second week of September, year 2016, between 6 and 8 pm...there was a convoy of cars at the Medium Security Compound carrying President Rodrigo Duterte, with Secretary Bong Go, Secretary Salvador Panelo, Secretary Jose Calida, and other high-ranking officials of the Office of the President and the Presidential Security Group.) 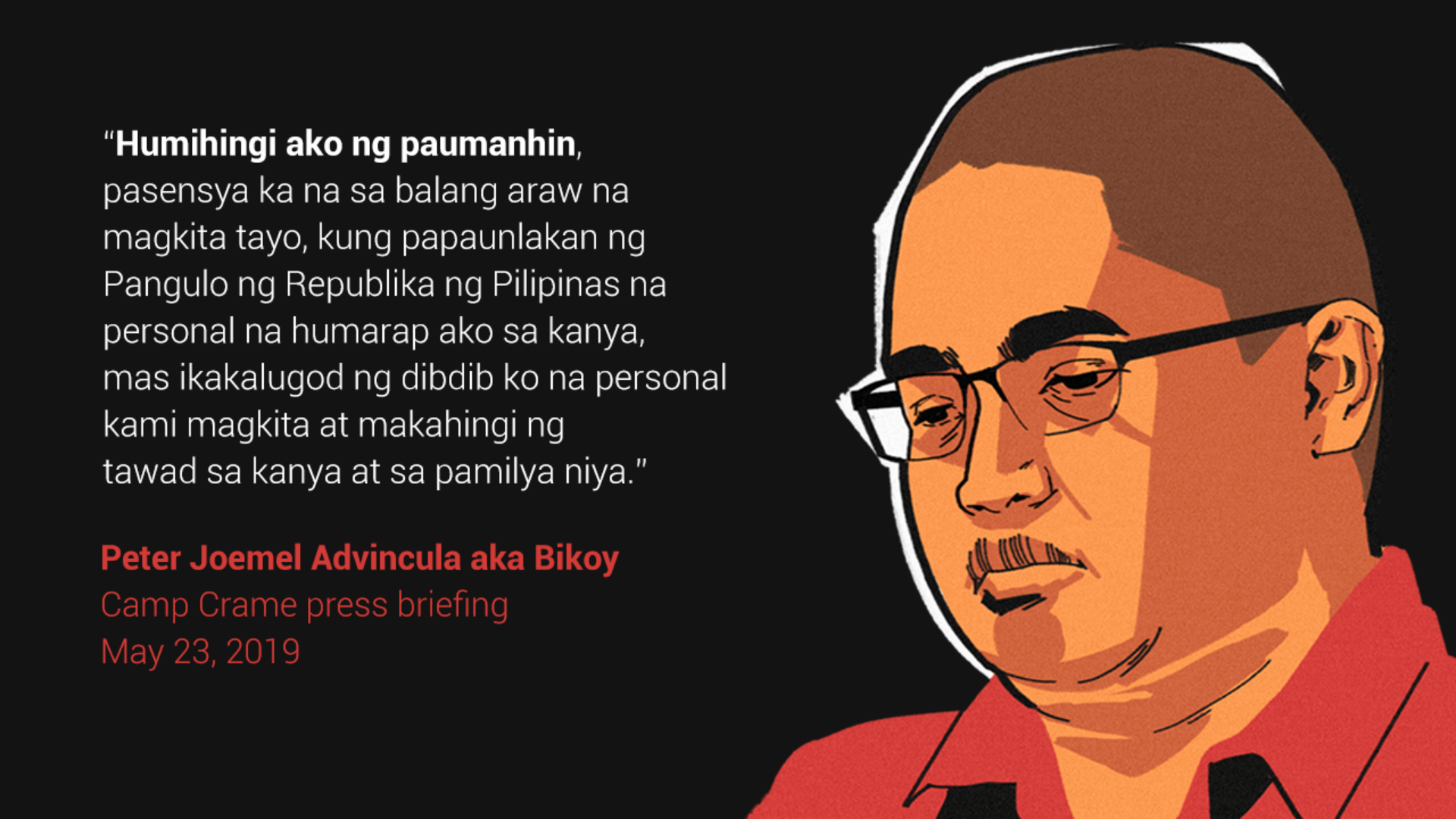 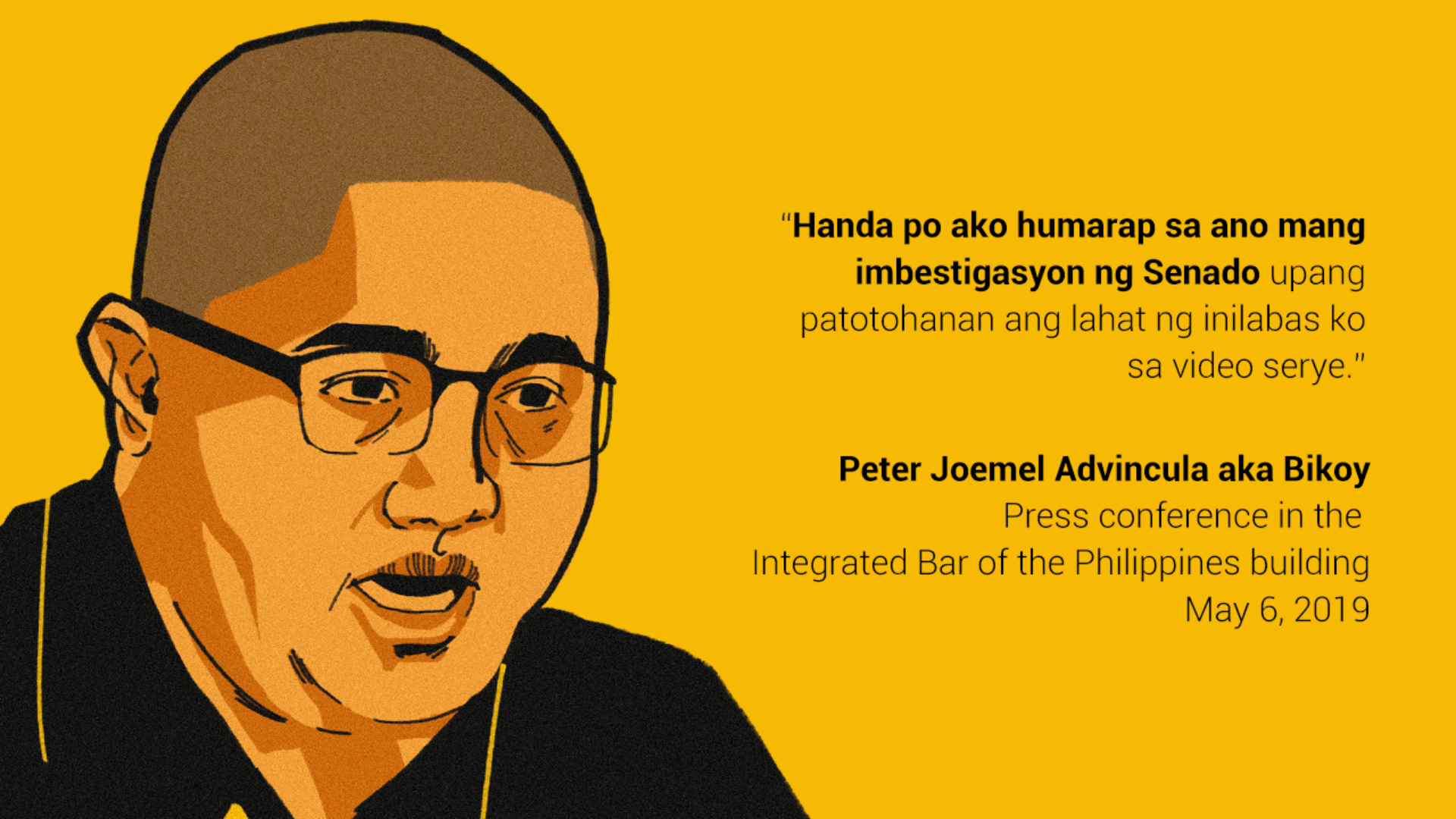 As his accusations against the Duterte administration sparked controversy, Advincula showed up in a press conference held at the Integrated Bar of the Philippines (IBP) headquarters on May 6.

There, he asked for help to sue Paolo Duterte and Go.

But two days later on May 8, Advincula stood at the pedestal of the PNP in Camp Crame, baring another grand twist to his story.

Advincula retracted all his public statements against the Dutertes and Go, and then accused their political nemesis, former senator Antonio Trillanes IV, of masterminding the anti-administration accusations.

He claimed that it was the Liberal Party who was behind the Ang Totoong Narco List (The Real Narco List) videos, with involvement reaching up to Vice President Leni Robredo.

Trillanes has denied Advincula's claims, but admitted to meeting him in August 2018 to vet his claims.

Before he could start a new narrative, however, Advincula had to clean a messy plate.

He disowned his two previous affidavits, and admitted that everything about the underground room in Misibis Bay was false.

But in retracting, he made another accusation that should interest investigators if they truly believe in Advincula – that there was a plot of sorts from within the Bureau of Corrections to jail De Lima for drugs.

(During that time at the BuCor, there was a need to establish a direct link between Senator De Lima herself and the drug syndicate...I only entrusted it to authorities, but the people of BuCor held an intense grudge against Senator De Lima.) 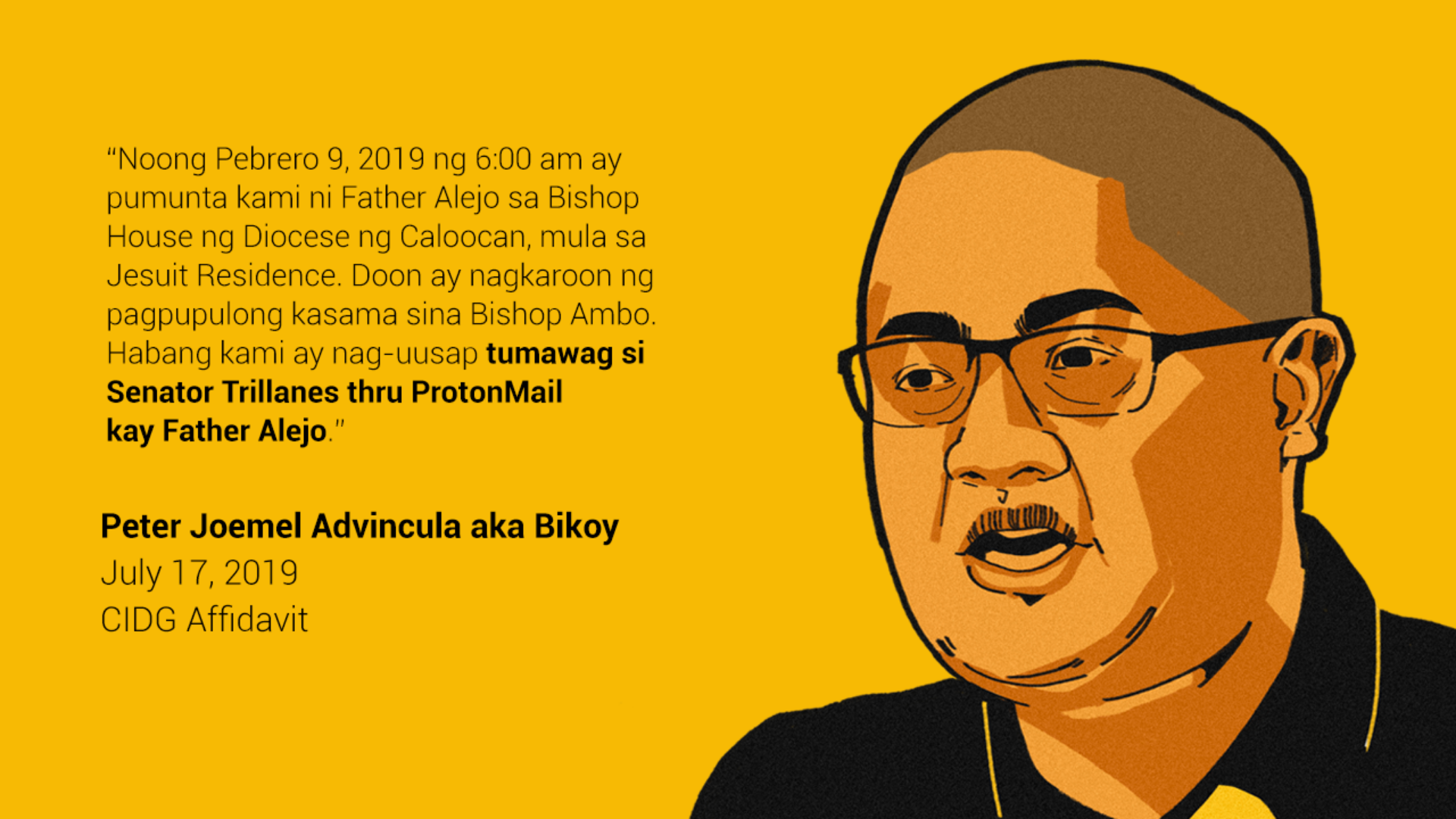 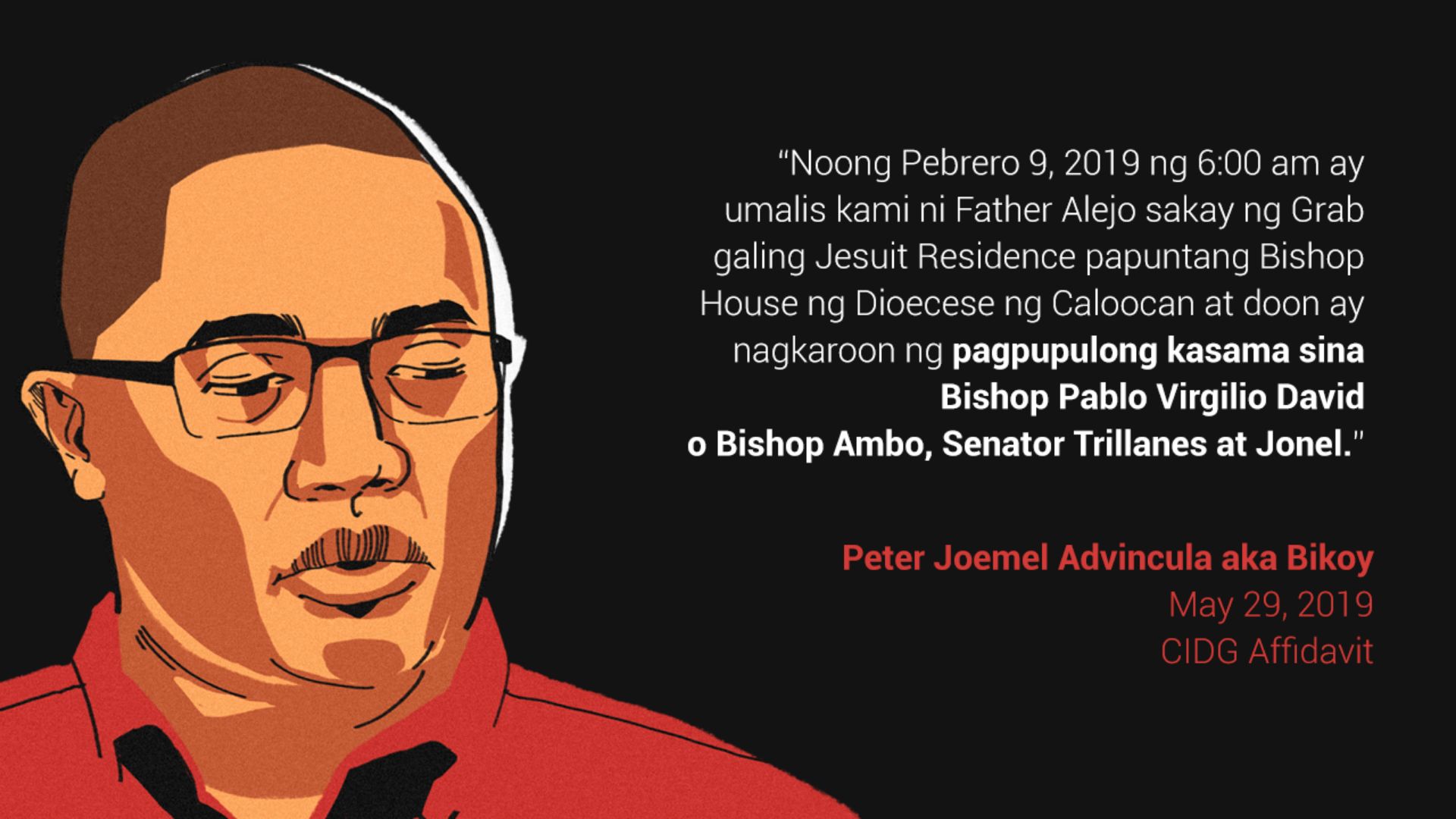 Advincula has executed two CIDG affidavits that link the Project Sodoma conspiracy with the opposition, one dated May 29, 2019, and the other, dated July 17, 2019. The July 17 version is the one that was submitted to the DOJ when the CIDG filed the complaint of inciting to sedition.

Even in these affidavits, Advincula made contradictory claims.

In both, Advincula said he first asked Father Ruben Reyes for financial help in August 2018. Advincula said he knows Reyes because the latter, a Jesuit, served as the chaplain of the Naga City Jail where he served time before Bilibid.

Advincula claimed Reyes linked him up with other priests associated with the Ateneo – all of whom are also respondents in the sedition complaint.

Advincula said that through the Jesuit priests, he met Trillanes on August 29, 9 pm, at the Jesuit Residence inside Ateneo.

On October 11, 2018, Advincula said he met top aides of Trillanes at the Loyola School of Theology where he was handed his 2016 affidavit – the one involving Aquino, De Lima, Roxas etc – but revised and replaced with Duterte and Go.

(We spoke about the document I gave to Senator Trillanes and the others in August, but I saw that there was a different version that now referred to the Duterte family and Bong Go.) 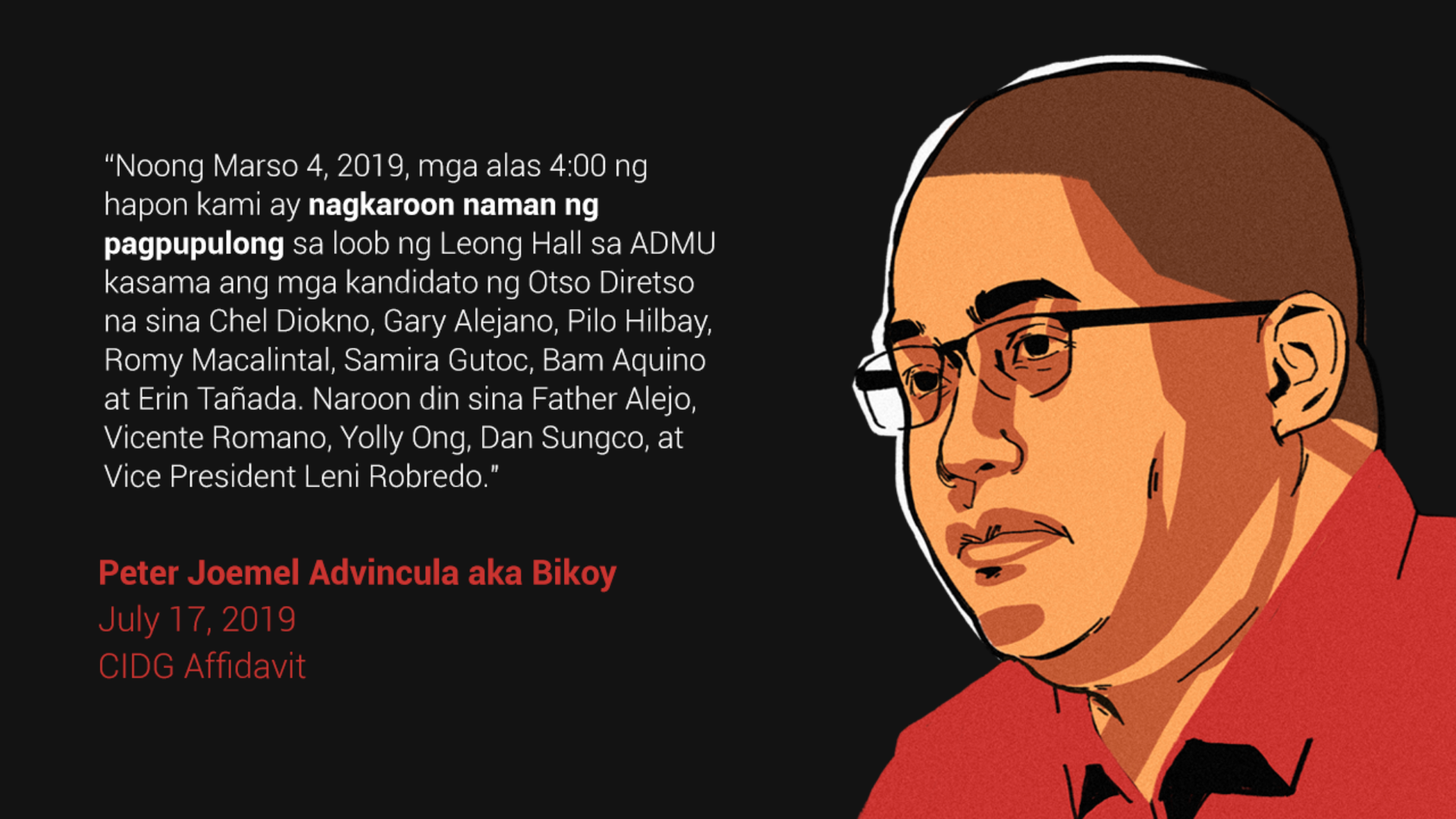 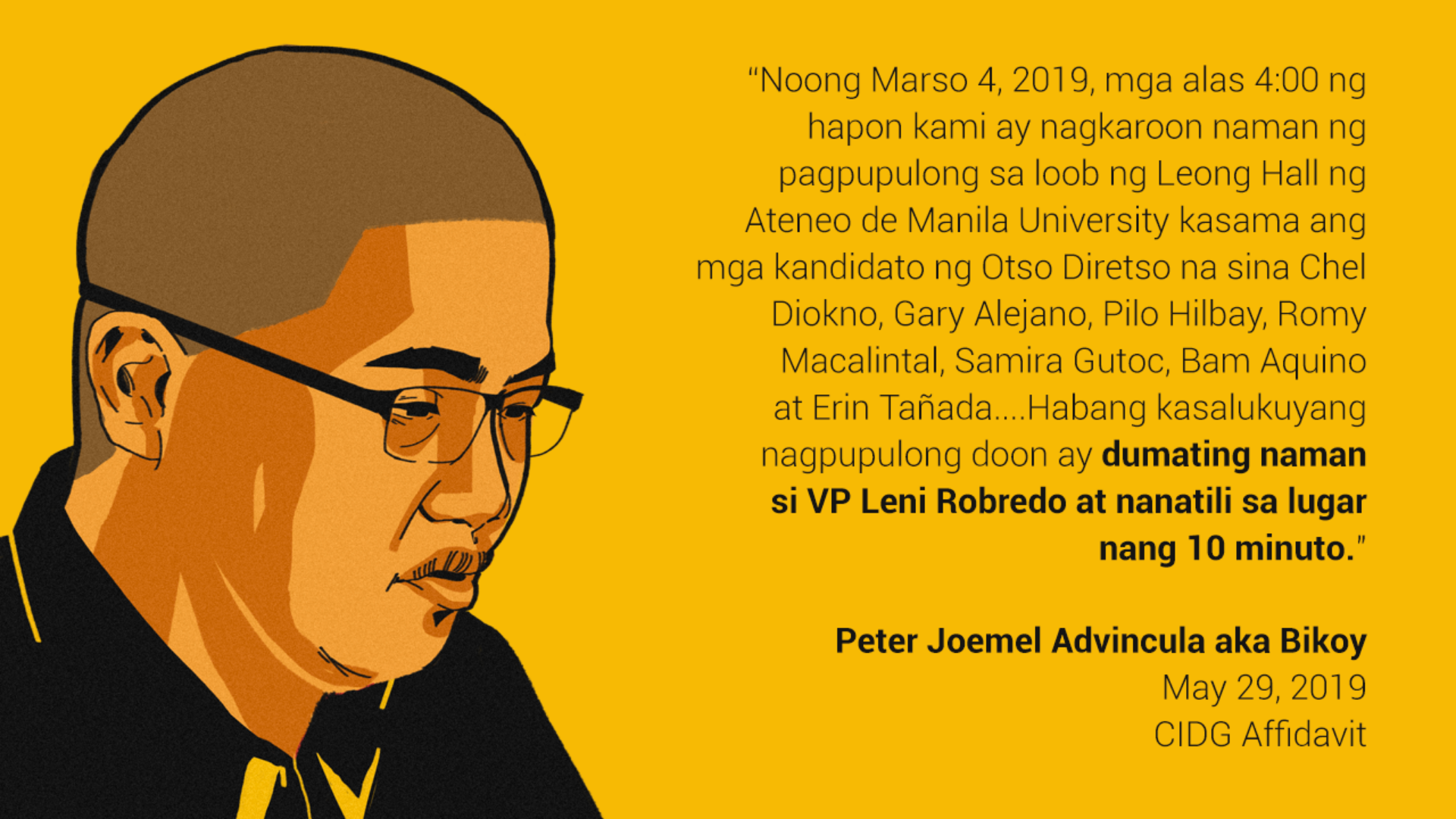 Advincula claimed he met Robredo on March 4 at Leong Hall inside Ateneo, along with Otso Diretso candidates, with only Roxas missing.

The Otso Diretso candidates and the Office of the Vice President (OVP) have denied Advincula's claims.

Alejano said the March 4 Ateneo narrative is convenient because the candidates were on campus for the Rappler senatorial forum.

"Bikoy's allegation against me is a complete lie and ridiculous. Again and again, I categorically state that I don't know Bikoy and have never met him. Tinaon niya ang kanyang kwento ng meeting daw niya sa Otso Diretso (8D) on March 4, 2019 where there was a Rappler Senatorial Forum in Leong Hall in Ateneo attended by the members of 8D. I must emphasize, though, that such activity was well covered by media and witnessed by many people both inside and outside the venue. Certainly, the truth will come out," said Alejano.

The two CIDG affidavits in May and July 2019 made mention of electronic traces of Advincula's communication with the people he is accusing, key cards of the apartments that he claimed were the Project Sodoma bases, as well as receipts for when they supposedly bought gadgets to shoot the Ang Totoong Narco List videos.

Witness credibility and corroboration are strong considerations of prosecutors when determining probable cause. The DOJ had once before cleared a drug suspect because of inaccuracies of an illiterate witness.

The DOJ wants to haul into its rooms the second highest official of the land, members of Congress and the Catholic Church – and line them up against a government star witness who has flip-flopped many times over. – Rappler.com