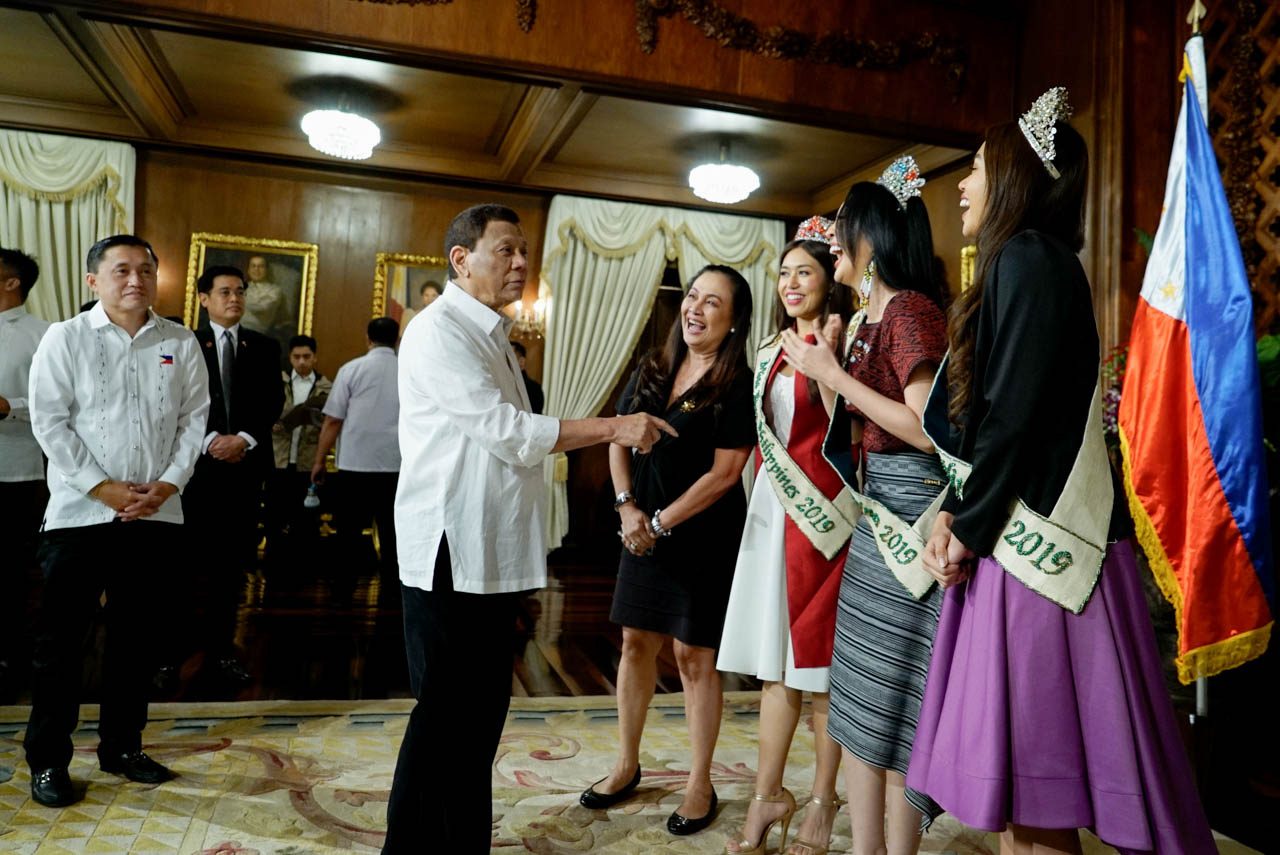 Facebook Twitter Copy URL
Copied
Bong Go goes with the President to post-earthquake inspections and meetings with beauty queens. How is this affecting his role as senator?

MANILA, Philippines – As expected, being senator has not stopped Bong Go from being a constant presence at President Rodrigo Duterte’s events.

Out of 15 public events of the President from July 23 to August 6, the neophyte senator and former special assistant to the President was present in 11 or more than half.

He’s notably not by Duterte’s side on days when there are Senate sessions, like on Tuesday, August 6. That day, Duterte had engagements with local government executives and the Federation of Filipino-Chinese Chamber of Commerce and Industry Inc (FFCCCII) yet Go was not in attendance.

Lest the public think he’s not doing the job he was elected to do, Go has already filed at least 14 bills.

In recent presidencies, there’s been no senator like Go so often seen with a sitting president. Sure, chief executives always have their favorite allies in Congress, as with the case of former president Gloria Mapacagal Arroyo, who included her favorite congressmen in her foreign trips.

But it’s rare for only one lawmaker to be held in such special regard by the President. Go attends even presidential events where no other lawmaker is present.

They’re often activities where you would expect an aide to be present, but not a senator. 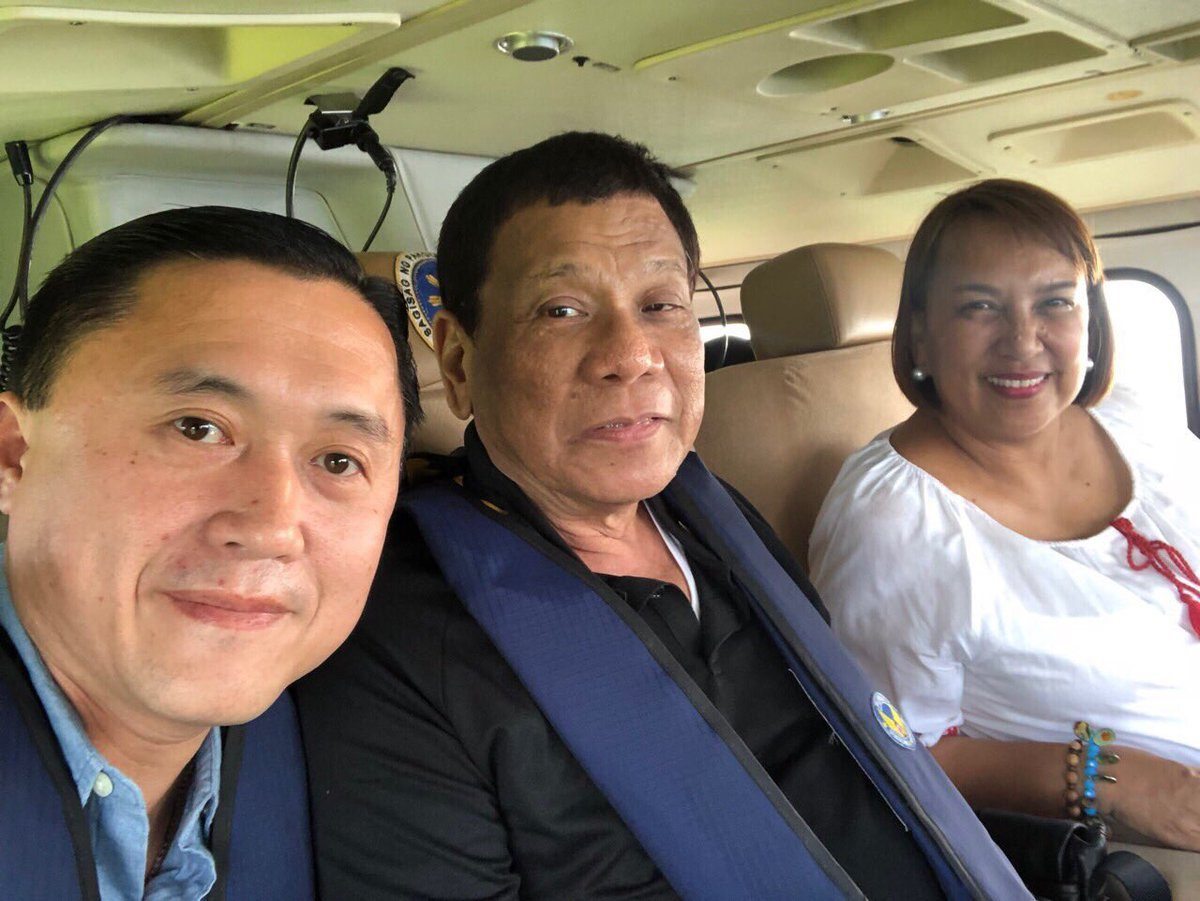 When Duterte made an aerial inspection of Batanes after the July 27 earthquake, Go was beside him in the chopper. When Duterte and Public Works Secretary Mark Villar inaugurated the Candon City bypass road in Ilocos Sur, Go was with them in the open-air car ride. When Duterte met with officials of Vietnam’s Communist Party, Go was the only Filipino lawmaker there.

Even when the be-sashed winners of Miss Earth Philippines paid a courtesy call on Duterte, Go found a reason to be there, smiling as his former boss made small talk with the ladies.

Here are the presidential events Go has attended from July 23 to August 6:

Go was absent from only 4 public activities – the presentation of credentials of ambassadors on July 24, the oathtaking of new appointees on August 5, the farewell call of Danish Ambassador Jan Top Christensen on August 6, and the oathtaking of the League of Provinces of the Philippines and FFCCCII officers on August 6.

Evidently, Go can’t shake off his habits as Duterte’s longtime aide. So persistent are his links with the Palace that Palace staff still have special protocols should Go wish to be interviewed by Malacañang reporters.

Duterte also still frequently mentions Go in his speeches, calling him “Senator Go,” as he did during the campaign season to promote Go’s candidacy to his audience.

Most prominent of all was when Duterte highlighted, not only Go, but Go’s pet bills in his State of the Nation Address last July 22, Go’s official first day on the job as senator since it was on this day when the 18th Congress convened.

And even if he is no longer SAP, Go apparently still gets first dibs on Duterte’s decisions. It was from him that reporters got information about the appointments of SC Justice Zalameda and agriculture chief William Dar, even before Malacañang could confirm them.

But striving to be by Duterte’s side in his official functions is bound to take time and resources.

What type of work is a senator expected to spend his time on?

“As senator, Bong Go can use his time familiarizing himself with the work of a senator, brainstorming with his staff on urgent legislation, meeting constituents and lobby groups, focusing on the committees assigned to him,” said professor Ela Atienza, chairperson of the University of the Philippines’ political science department.

Go is chairperson of two Senate committees, health and sports.

Atienza added that Go can also solicit position papers from different sectors on proposed laws that could affect them or study the work of executive agencies since the Senate also has oversight functions, she added.

But another way of thinking about Go’s unflagging appearances with Duterte is it’s one way to ensure harmony between the Senate and the President.

Go’s fellow senators think his closeness can help them understand Duterte and his legislative priorities better. The Presidential Legislative Liaison Office (PLLO) is technically supposed to do that job. The office has been criticized by senators in the past for lackluster work.

But with Duterte’s highly personalistic style and the premium he places on trust and personal loyalty, Go might just be the go-between Congress needs to prevent more vetoed bills, the surest sign of a disconnect between the executive and legislative branches. (READ: House, Senate eye ‘zero veto’ in 18th Congress)

But then could Go have achieved that job better by heading the PLLO? Especially since being senator comes with one other requirement: independence.

Democracies in presidential forms of government are rooted in the separation of the legislative and executive branch so that the two can balance each other and serve as a check on the other’s powers.

“It does not reflect well on the ideal expectation that a senator should represent a branch separate from that of the President,” said Atienza.

With Go still appearing by Duterte’s side like an aide, the public will continue to see the newbie senator as someone who enjoys the best access to the President. It’s a strong political message. Go enjoys the powers of elected office but still gets to whisper in Duterte’s ear.

“It shows that the personal ties between the two are still being flaunted in public even if they should be working in different branches of government,” said Atienza.

Apart from his events with the President, Go busies himself with visits to fire victims and other personal engagements. On August 1, police beat reporters were surprised to see him take over their regular press briefing with police chief General Oscar Albayalde.

Go, wearing camouflage-patterned polo, took to the podium to allege a new conspiracy by opposition politicians to ruin his reputation and that of other administration allies.

With his newfound stature as senator and his ever-strong ties with the President, it seems there’s no stopping Go. – with a report from Aika Rey/Rappler.com