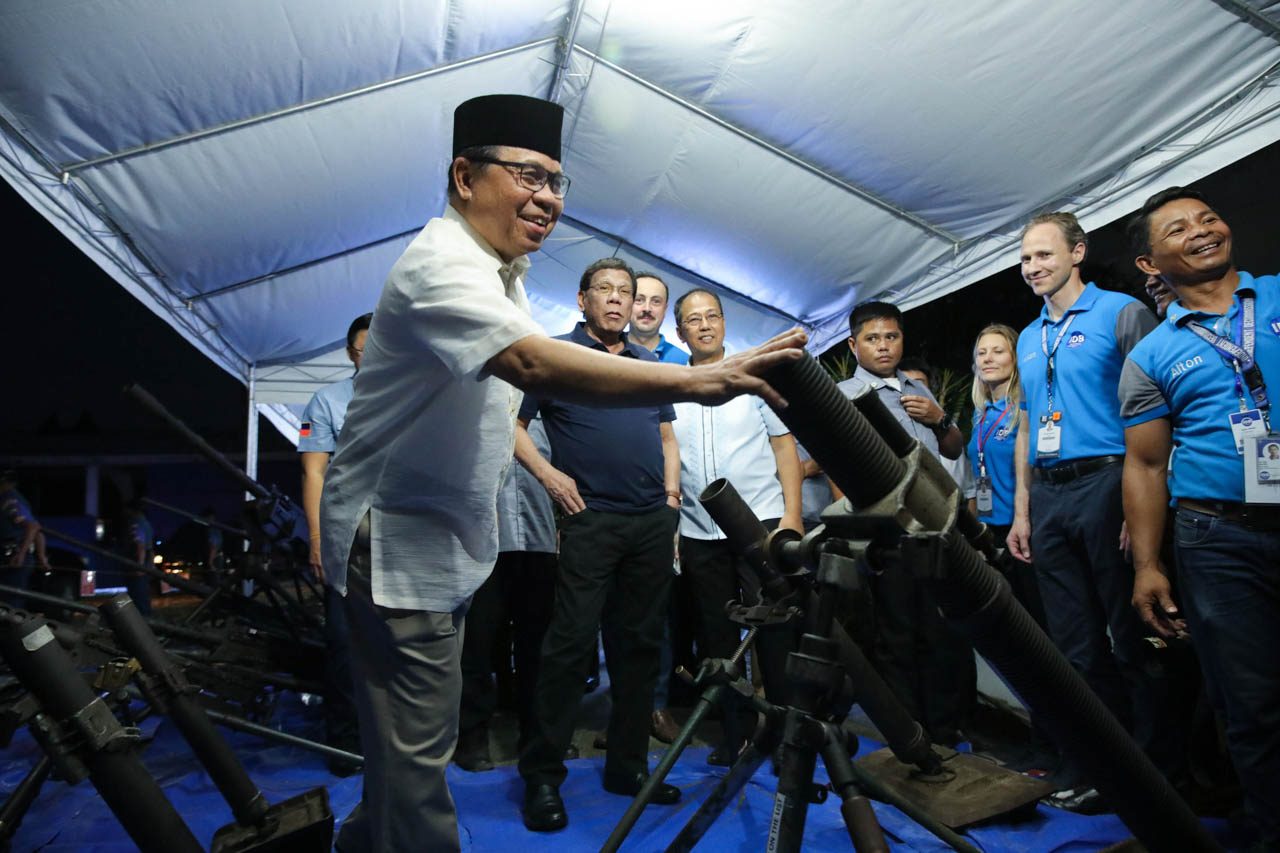 Facebook Twitter Copy URL
Copied
In its first 5 months, the new Bangsamoro government gets past birth pains as its Parliament and Cabinet struggle to make an impact on the daily lives of the region's people

MANILA, Philippines – When the Bangsamoro region’s first leaders took their oaths on March 29, they did so before the Koran and in the name of Allah.

Interim Chief Minister Al Haj Murad Ebrahim, a former rebel who is the new region’s top official, led them in an oath of “moral governance,” one that wove the task of leadership with a holy promise. It was a message to the people of Muslim Mindanao that the government being sworn in is their government.

Indeed, all eyes are now on the Bangsamoro Autonomous Region in Muslim Mindanao (BARMM), as it tries to fulfill the Muslims’ vision of self-rule and lasting peace in Mindanao.

It’s been over 5 months since BARMM’s inauguration at the Shariff Kabunsuan Cultural Complex in Cotabato City. Ebrahim has formed his Cabinet and the Bangsamoro Transition Authority (BTA), formal name of the interim government, has begun convening as a Parliament. Two of its members passed away. New members were added, bringing the BTA membership to 76 out of the required 80. (READ: Who’s who in the Bangsamoro Transition Authority)

The region’s first months have been all about transitioning from the old set-up.

The first challenge for the BTA was how to shift from the structure of the now-defunct Autonomous Region in Muslim Mindanao (ARMM) to the new Bangsamoro government, which now covers a larger geographic area and will wield more powers.

The ARMM employed 36,000 people whom the BTA must now manage.

One of its birth pains was about money: the salaries for the BTA members and their staff. Because there was no appropriation for their salaries in the 2019 government budget, it took 4 months before the officials could get paid. Many had to shoulder their expenses traveling to and from the government complex in Cotabato City.

Their salaries are sourced from the budget department’s savings and the Office of the President’s contingency fund.

The real headache, however, was the salaries for the officials’ staff. The Department of Budget and Management said it could provide salaries for a maximum of only 3 personnel. BTA members wanted 5 staff and a higher salary grade.

But the BTA had other things to worry about. By end of June, 3 months after the inauguration, President Rodrigo Duterte was getting impatient.

He said in public that the BTA had to “hurry up.” He complained of a “communication breakdown” between the BTA and the national government. Ebrahim lost no time setting up a meeting with Duterte less than two weeks later, on July 10.

He and his Cabinet updated the President and moved to form the intergovernmental relations body (IGR), a group that would allow the BTA and national government to coordinate.

But here it was Duterte’s turn to dilly-dally. Ebrahim had already chosen the 7 BTA members for the group while Duterte has not.

Sinarimbo admitted that the IGR should have been formed much earlier, to speed up the cures to the early difficulties involving budget and coordination.

Duterte appeared to have his own fix. He announced he wanted ex-agriculture chief Manny Piñol to be his “point man” for the Bangsamoro government. Piñol, who isn’t popular  among BTA members for his role in opposing an early agreement on an autonomous region, has been named Mindanao Development Authority chief, but coordinating with the BTA is not within that office’s mandate.

The true test for the Bangsamoro government is the strength of its Parliament, said Ben Bacani, executive director of the Institute of Autonomy and Governance, based in Cotabato City.

The BTA also sits as a parliament, tasked with crafting the region’s first laws. The BTA’s executive power rests on the interim chief minister and the ministers in his Cabinet.

The parliamentary form sets the BARMM apart from the rest of the Philippines, which has a presidential form of government. Champions of the new region had called for this form, claiming it would be more inclusive and in keeping with the Bangsamoro culture. It has to live up to that now.

“You have to prioritize the organization of a strong Parliament. That is the test of the transition, otherwise it will just be the ARMM with a strong executive. How much does the Parliament participate in crafting major policy decisions? Parliament has to control the funds,” Bacani told Rappler on September 4.

It is through the Parliament, he said, “where people start to feel they are part of government.”

A privilege speech by Minority Leader Lisa Alamia on August 23 called for “unity” in the BTA and a rejection of a ”vicious and unjust” schism.

“Mr Speaker, the elephant in the room that I am referring to is the false and perceived dichotomy of ‘ARMM versus BARMM.’ This othering that separates and further divides our people, divides us instead of uniting us,” she said.

Alamia herself was a former ARMM executive secretary and social welfare secretary. Such issues are normal after a conflict, said Bacani. But the technocrats and ex-revolutionaries need to move forward and work together.

“Revolutionaries need the support of technocrats. Technocrats have to accept that revolutionaries are now the decision-makers. You have to help them lead, provide technical assistance. Those parties have to be open to work together. You see distrust when you exclude,” he said.

The groupings within the BTA highlight the need to “clarify” the relationship between the executive branch (Cabinet) and the Parliament.

For the first 4 months, the Parliament was not being informed of Cabinet decisions. They were also holding sessions only 3 days a month.

After Ebrahim met with Duterte in July, things changed. It was decided that Parliament would convene 6 days a month – Wednesdays to Fridays of the 3rd and 4th week of every month. Ebrahim also decided to finally give regular updates to the Parliament. Every Wednesday session would feature a “Chief Minister’s Hour” in which Ebrahim would report on the government’s progress and take questions from Parliament members.

“The fact that he is reporting and saying he is open to questions, I think it’s a big improvement,” BTA member Amir Mawallil told Rappler.

Parliament members had also recently been told they would be consulted on the programming of P30 billion in funds that could be provided by the national government within the year.

Finally, on August 23, the Parliament passed its first law – adopting a Bangsamoro flag.

The transition plan, Sinarimbo said, was finished late. In fact, it has not been finalized.

A version of the transition plan obtained by Rappler lays down the structure of the Office of the Interim Chief Minister, ministries, and Parliament; phasing-out schedule; and transition mechanisms. Sinarimbo confirmed the document was a version of the plan, but not the latest, due to some minor changes.

As for the 7 codes and law protecting indigenous peoples, the BTA targets passing them all by the end of 2019. The first draft of the codes will come from the Cabinet, with ministers assigned to codes relevant to their ministries (Sinarimbo, for instance, is in charge of the local government code).

Ebrahim wants to submit the draft codes to the Parliament by October so that they can be approved in December, in time for 2020, when the first block grant, projected to amount to P63.3 billion, comes in.

The Duterte administration is asking for a total of P70.6 billion for the BARMM for the year 2020. The amount includes the block grant and a P5 billion Special Development Fund.

Change you can feel

While the BTA is busy with setting up the bureaucracy and crafting its first laws, observers and experts are pushing the new government to make its presence felt among average Bangsamoros.

“There is low hanging fruit that needs to be delivered and it is not being delivered. There is no discussion on issues about land. Anyone who’s gone through the process to start pushing this law (BOL) would have recognized that the IPs have always carried this issue. No one is dealing with that,” he said on September 3.

He said his group has “not seen any effort to bring in the Tausugs,” the dominant ethnic tribe in Sulu, an island province that voted against joining the BARMM but was still included because of provisions in the BOL.

The Cabinet is aware of the urgency of reaching the people, said Sinarimbo. It’s why one of the plans for the P30-billion BARMM budget for 2019 is to allocate some of it to health services and education subsidies that will go straight to barangays, the smallest government unit.

Nikki dela Rosa, IAP country manager, said the BTA has to be vigilant against any policy that appears to exclude some ethnic groups and sectors, especially since BTA members from Maguindanao and Lanao del Sur far outnumber those from the island provinces.

A question of budget

Bacani is not that worried about ethnic lines since such issues will crop up under any leadership in ethnically-diverse Mindanao. The “true test” for BARMM inclusivity is the allocation of the 2020 block grant.

“You need to come up with policies that are inclusive, and you will be able to see that in the budget. That will be the test. How will they budget their block grant, how they will allocate the funds of the reigon to benefit everybody?” he said.

A strong, involved Parliament is also one way to make all Bangsamoro peoples feel recognized by their government. BTA members representing their provinces should be able to speak out, participate in decision-making and governance, and make laws that will be felt by their constituents. Average Bangsamoro residents should feel their representatives hear their concerns and act on them through the BTA.

Bacani also urged the BTA to be more transparent.

“They have to communicate what their plans are. Because there is a problem with what is really happening. You don’t hear much,” he said.

The BTA should coordinate better with the media to ensure developments in both the Cabinet and Parliament reach the public. The final transition plan should be made public. BTA members must keep their constituents updated on developments and be open to questions. Bacani credits Ebrahim with setting the right tone for the BTA.

But as the Bangsamoro government pushes on in its first year in power, it will have to prove that words lead to action. “Is it more than words? You need the right processes to follow through. What is your plan? How do you promote that in terms of policies, structures and processes?” asked Bacani.

The clock is ticking for Ebrahim.

Will the MILF-led BTA get the ultimate affirmation through an election of its members to the first elected Bangsamoro government? Or will power return to the political clans who have long dominated parts of Mindanao? (READ: Power brokers in the Bangsamoro region)

With high hopes and billions in funds about to pour in, the time is ripe for the BTA to prove it is the government the region needs. – Rappler.com