Facebook Twitter Copy URL
Copied
(UPDATED) The children of the late National Artist and architect Bobby Mañosa are facing at least 9 cases in court demanding payment of over P253 million. This is on top of over P372 million they owe other entities as of August 2019.

MANILA, Philippines (UPDATED) – The family of the late Bobby Mañosa, the national artist who reportedly designed the infamous “cauldron” of the 2019 Southeast Asian Games, has been accumulating lawsuits seeking payment of an estimated P253 million worth of debts for the last two years.

The lawsuits, however, exclude a longer list of entities – people belonging to wealthy families; a government agency; and a bank – all also expecting money from the siblings worth another P372,886,612 as of August 2019.

In total, the family owes all of them P626,237,920. This, as their companies struggle to pay P1 billion in business obligations accumulated over the years.

The demands came from a multimillion-peso real estate project marketed with the Mañosas’ portfolio of architecture and interior design that never saw fruit called “Anahaw Park Project” near the posh Alabang Hills Village.

Rappler obtained a copy of a counter-affidavit by the Mañosas in one of the lawsuits. There, the siblings denied all allegations of fraud and intentions of scamming investors.

A tale of friendship

The complainant with the biggest demand for payment is Marisol Ramirez, a single mother with two children who got her income from inherited property she leased. She made passive income from personal investments.

Ramirez met the Mañosas through a mutual friend in 2011 after she moved to the exclusive Ayala Alabang Village in Muntinlupa. Since then, she and the family exchanged invitations for intimate dinners and family celebrations.

“I became close friends and I also felt close to the Mañosa family,” Ramirez wrote in her complaint.

At the peak of this trust in April 2017, Dino Mañosa invited Ramirez to invest in an upcoming project they had: the Anahaw Park Project.

She had to invest P50 million and could get her returns either through the acquisition of two houses in the project with a 15% discount, or a return of 8% per year for two years (P50 million turns to P58 million with the interest.)

The pitch as recalled by Ramirez in her complaint went this way: “The Anahaw Park Project would be a high-end residential project in the Alabang Hills Subdivision where the clientele would be individuals with high net worth, and the structures would be designed by his siblings, Bambi and Gelo…[T]he houses in Anahaw Park Project will be designed and built using the ‘Mañosa’ brand and style.”

Ramirez decided to invest on May 10, 2017, later deciding to get the P58-million return option.

Come 2019 and Ramirez said all she has received from the family has been P250,000, the offer to the shares in a property worth only around P1 million, and a trove of messages promising her that the Mañosa family would pay her back. 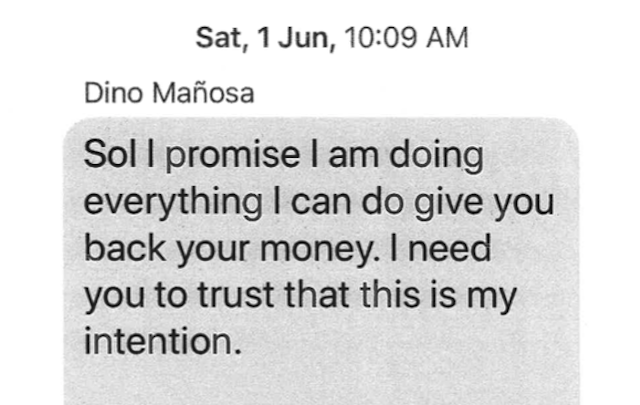 Marisol Ramirez saw the first warning when she gave her P50-million check.

On May 10, 2017*, Dino Mañosa arrived at Ramirez’s home to present the Investment Proposal Letter. It was dated April 25, 2017, was supposedly for a “Mañosa Confidential” project, and indicated that her money was going to Mañosa Properties, Inc (MPI).

In late 2018, Ramirez recalled hearing from the grapevine that the Mañosa family’s projects had been struggling to meet deadlines and had difficulty paying suppliers.

She then heard that the Anahaw Park Project would be delayed because of a dispute with the Ayala Hills Village Association, which involved fighting for the right of way for the project to access Don Manolo Boulevard, a key artery in Alabang.

Still, she anticipated the day she would receive her returns for her and her children.

Ramirez was supposed to collect her money on May 12, 2019, but there was nothing.

She reminded Dino Mañosa of their agreement through text – their usual line of communication – but Mañosa said he would instead get back to her in writing.

Three days later, Ramirez got a letter from Dino Mañosa, president of MPI, saying that the investment could not be returned because of the company’s “unforeseen position” with the Anahaw Park Project.

He also sent her a P250,000-check, which Mañosa said in his letter, should be seen by her as “a sign to show good faith.” Ramirez saw only reason to panic.

Furious, Ramirez recalled in her complaint that she barraged Mañosa with text messages.

“Where did my money go?”

“Don’t you think I deserve an answer?”

Mañosa said he wanted to explain in person, but Ramirez texted back, saying she could not even face him as she felt “sick to [the] stomach.”

“I promise you that we (my whole family) have been trying to solve this problem and approaching our network to help us…We have been looking for partners who can buy into MPI and inject equity to help us,” Mañosa said in a text message.

A meeting took place to discuss the payment with their original mutual friend, Jose Maria Fernandez-Guerrero. Ramirez did not attend.

At the meeting, Mañosa supposedly admitted that the project had not even begun construction and that the company which owned the land where the project was located was not MPI but another Mañosa company, Mañosa Farmstay, Inc.

But days later, she only received an offer of 25% of a certain Verdana Malampasan property. It was worth around P1 million.

Gelo supposedly said he was “hands-off” with regard to his brother’s dealings, and Bambi had “no idea” about her investment. 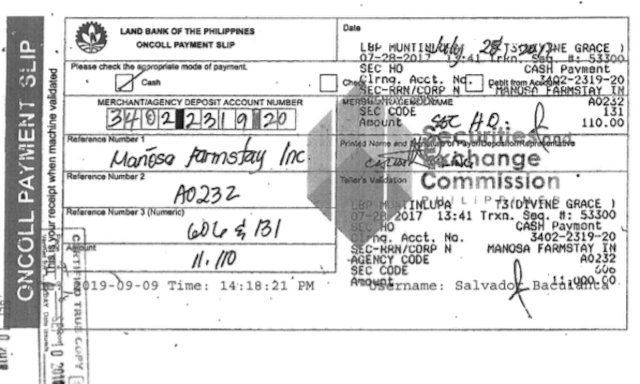 She could no longer get the family to speak with her clearly so she investigated and found that MPI had an authorized capital stock of only P10 million, which indicated that the company could not possibly bankroll an Alabang development, let alone engage in real estate.

“It had no authority to solicit investments from the public. Despite this, MPI and the Mañosa family, through Dino, solicited P50,000,0000 from me. Worse, through fraudulent misrepresentations, I was made to believe that I was investing in MPI’s Anahaw Park Project, which, in reality, was non-existent,” Ramirez said in her complaint.

On September 13, 2019, Ramirez filed her complaint with the Office of the City Prosecutor of Muntinlupa, accusing the siblings of syndicated estafa. She also asked that a precautionary hold departure order be issued against the Mañosas to block any escape plan.

“It is undeniable that the MPI, through its directors, officers, and stakeholders, are undoubtedly engaged in illegal activities to defraud the public,” she said. – Rappler.com