Facebook Twitter Copy URL
Copied
Setting up more organized and stronger coordinating systems in the justice sector is a global trend. The Philippines tries to keep up.

MANILA, Philippines – The word “justice” in the Philippines has been mocked to be “just-tiis” or endure, with insufferable bureaucratic processes and delays that could stretch for decades.

Such is the fractured justice system of the Philippines. So what if someone tells you of a grand plan to fix it, and the solution is as simple as an advice to a quarrelling couple: you should talk more, and talk better.

In the Philippine Development Plan (PDP) for 2017 to 2022, which basically lays out the government’s long-term targets, better coordination among justice agencies is the catch-alll fix in “pursuing swift and fair administration of justice.”

“This historic shift will deliver justice in a way that is responsive to the demands of its constituents,” says the PDP.

How will this work? Enter the justice zones.

A justice zone is not a physical construction but a concept. It sets up a communication and coordination mechanism among the justice agencies in that locality – police, prosecutors, courts and prisons.

“[The] Justice sector is often very fragmented, more so than other sectors, you have this big number of institutions, all independent, they don’t talk together, they’re not encouraged to talk to each other,” said Christian Eldon of Governance in Justice (GoJust), a 3-year, European Union-funded reform program that ends in June 2020.

“It’s like the system is set up to fail, it has a problem by default, by design, not saying that you can design it any other way but it’s something that comes with the structure, [and] many, many countries face this,” Eldon said.

The justice zones are envisioned to fill these gaps.

For example in Cebu, when a water crisis hit one of the detention facilities there, the justice zone mechanism was a crucial part in solving the problem. Ordinarily, it would be the Bureau of Jail and Management Penology (BJMP), which is under the DILG, which would be left to solve the problem.

In the justice zone setup, an executive judge (EJ) took the lead in assembling a team representing all sectors and met with the water board of the area.

“The EJ and his colleagues, they realized they knew somebody in the water board and they went there as a team, sat down and explained, and as part of their corporate social responsibility, they are delivering 30,000 liters of water every week, free of charge,” said Eldon.

“It’s one simple thing, but it’s exactly what they’re supposed to do,” Eldon added.

Difficulties in setting up

The Philippine Development Plan targets 14 justice zones by 2022; GoJust has committed to 8 of that. At present there are 6 – Quezon City, Cebu City, Angeles City, Davao City, Bacolod City, and Naga City, the last 4 were launched during the 11-month term of retired chief justice Lucas Bersamin.

If it’s just a communication problem, why are there so few justice zones? Because there are standards.

First, it must be proven that it works. Otherwise a mass creation of justice zones is futile.

Eldon said indicators for success have not been developed yet because “it is time consuming” and has always been left out in key meetings.

“How do you measure the impact. That’s important to do, if you want to maintain it in the long run, you have to be able to show the results. Therefore we need a good monitoring system in place, that has to be strengthened,” said Eldon.

An example is congestion of jails.

“The number of days after a prisoner is set to be released from jail and he remains in jail, if you shorten that, then that should be the variable to be used in evaluating how effective the justice zone mechanism in addressing the concerns of a Person Deprived of Liberty (PDL). But that’s the long-term goal,” said Justice Undersecretary Markk Perete.

Right now, the justice zones are supervised by a secretariat of the Justice Sector Coordinating Council (JSCC) composed of the DOJ, DILG, and Supreme Court.

But even that has to be improved.

“The challenges that remain include sthrengthening the communication structure between the justice zone and the JSCC, between the local area and the national area, because they’re not sure, they’re not clear, whom do we send a request to, is it the secretariat, is it the Program Management Office (PMO), is it the Technical Working Group, is it GoJust, so that has to be streamlined,” said Eldon.

A shared database and communications software would be the dream, where agencies talk through a streamlined digital process, rather than the traditional ways of setting up meetings and sending memos to each other.

The DOJ will begin with the National Justice Information System (NJIS), a shared information portal which was scheduled for launch this December but was moved to January 2020 due to the typhoon.

“The portal will contain the crime index and the single carpeta system. Right now the access is to the law enforcement and then the judges and the prosecutors, but in the long run, it will be made available to the public,” Perete said. In the single carpeta system of the NJIS portal, judges and jail officials will know all the prisoners who are already eligible for release. It will aim to slowly decongest prisons in the country.

Another key feature of the NJIS portal is the crime index.

The crime index is a list and definition of all the crimes and offenses in Philippine penal laws, so that police officers and prosecutors will have a uniform understanding of what those are.

The goal is not only for law enforcement to build up stronger cases, but also to weed out weak cases so they do not clog prosecutorial dockets, and eventually, court dockets.

“[There are] too many cases entering the system, no mechanisms to filter them out and therefore you end up clogging the system because all cases have to go through and can only get out through a decision by court, and no system can cope with that, so you need these filtering mechanisms,” said Eldon.

GoJust reports that in 49 courts that are implementing case decongestion plans, the dockets were reduced to 66,213 cases from 81,543 cases inventoried at the start of the program.

It will go hand-in-hand with a pending legislation called the Criminal Investigation Act that streamlines the process of deciding which cases are sent to trial and which aim to “eliminate bureaucratic layers which cause undue delays.”

“The National Prosecution Service (NPS) statistics in terms of nomenclature of crimes are limited to probably major crimes, drugs, homicide, rape, so maybe like a maximum of 10 or 20 crimes, but if you have this on their system, it will be easy for them to extract and it will be very accurate and it can be down to the last level of offense,” said Ingrid Gorre, a local expert of GoJust. The reason why the justice sector is fragmented by design is to preserve the independence of each agency.

Police officers, and other law enforcement agencies, file the complaints, which will be resolved by prosecutors. If there is probable cause, the prosecutors will try to score a conviction before the courts.

If you get all of them talking, it may open up the risk of collusion.

“Yet given present circumstances and realities that have seen disturbing incidents of weaponization of the law versus critics and dissenters…this may be abused or may result in the perpetuation of such practices,” Olalia added, as progressive groups continue to slam the raids on, and arrests of activists prompted by police officers applying and then securing search warrants from courts.

For former Supreme Court spokesperson Ted Te, “[Justice zones] are really designed only as coordination and synchronization of efforts. But even without a mechanism, if officials want to collude there is nothing to prevent that.”

“That is a lesson to be learned from history,” Te added, referring to the assassination of former senator Benigno “Ninoy” Aquino Jr, where the Supreme Court in 1986 found that the late dictator Ferdinand Marcos “had stage-managed in and from Malacañang Palace a scripted and pre-determined manner” the acquittal of General Fabian Ver and a dozen soldiers in the Ninoy murder case.

That case entailed a military investigation, a separate fact-finding board, prosecution by the then-called Tanodbayan, and later a trial at the Sandiganbayan, which was decided “under the compulsion of some pressure which proved to be beyond their capacity to resist.”

Olalia also worried that “this might just fit into the so-called ‘whole of nation approach’ and the ‘drug war.’“ 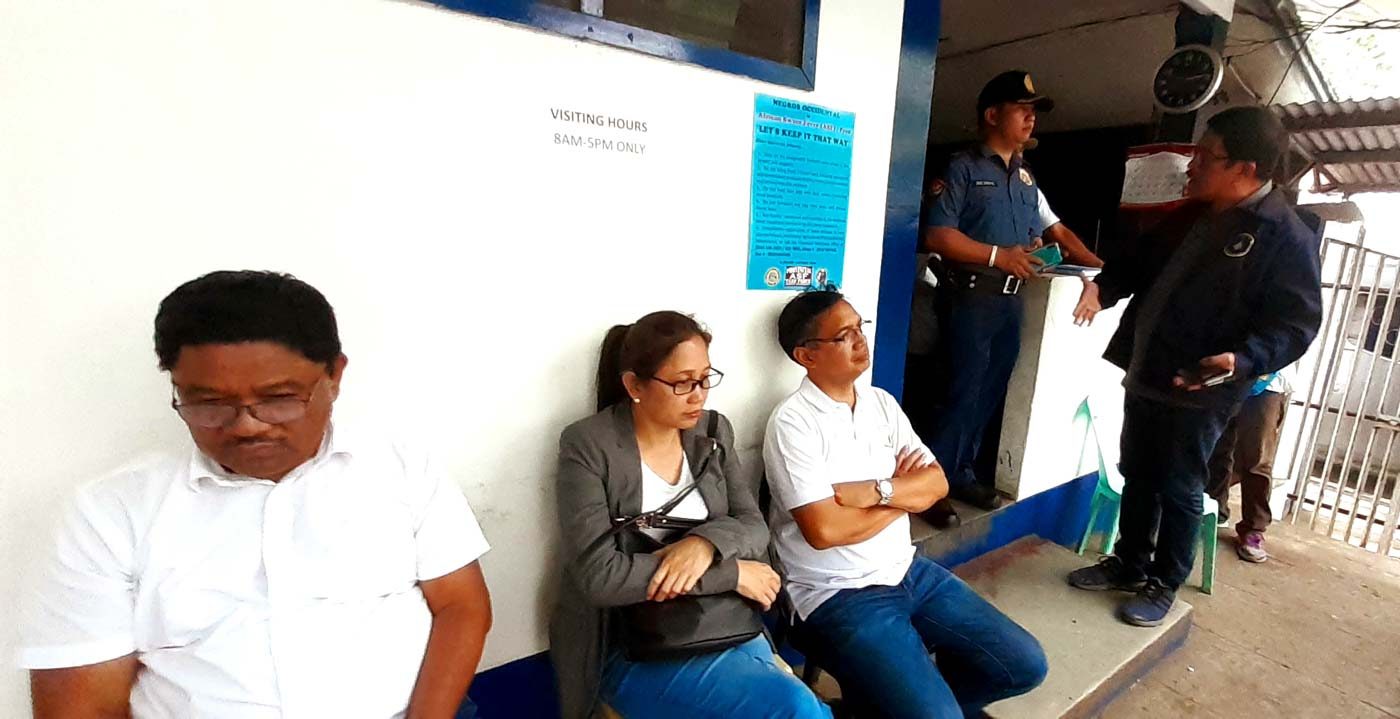 Perete said the JSCC is making sure the mechanisms do not remove the independence of agencies.

“For example in the budgeting process, each department handles the budget for a particular project. The other department would not have a say in how it is run, they just receive inputs on how to make sure that the project instituted by one will not adversely affect the project of another,” Perete said.

In the end, it will depend on an honesty system of some sort, where justice zones are trusted to “not discuss the merits, just the resources needed,” according to Te.

The reform is a fantasy written by the best and brightest, with an all-star cast from the 3 branches of government and the international community.

But Filipinos have heard all sorts of fantasies all too many times before. Will this be the one that comes true? – Rappler.com