Will e-cigarettes help you quit smoking? 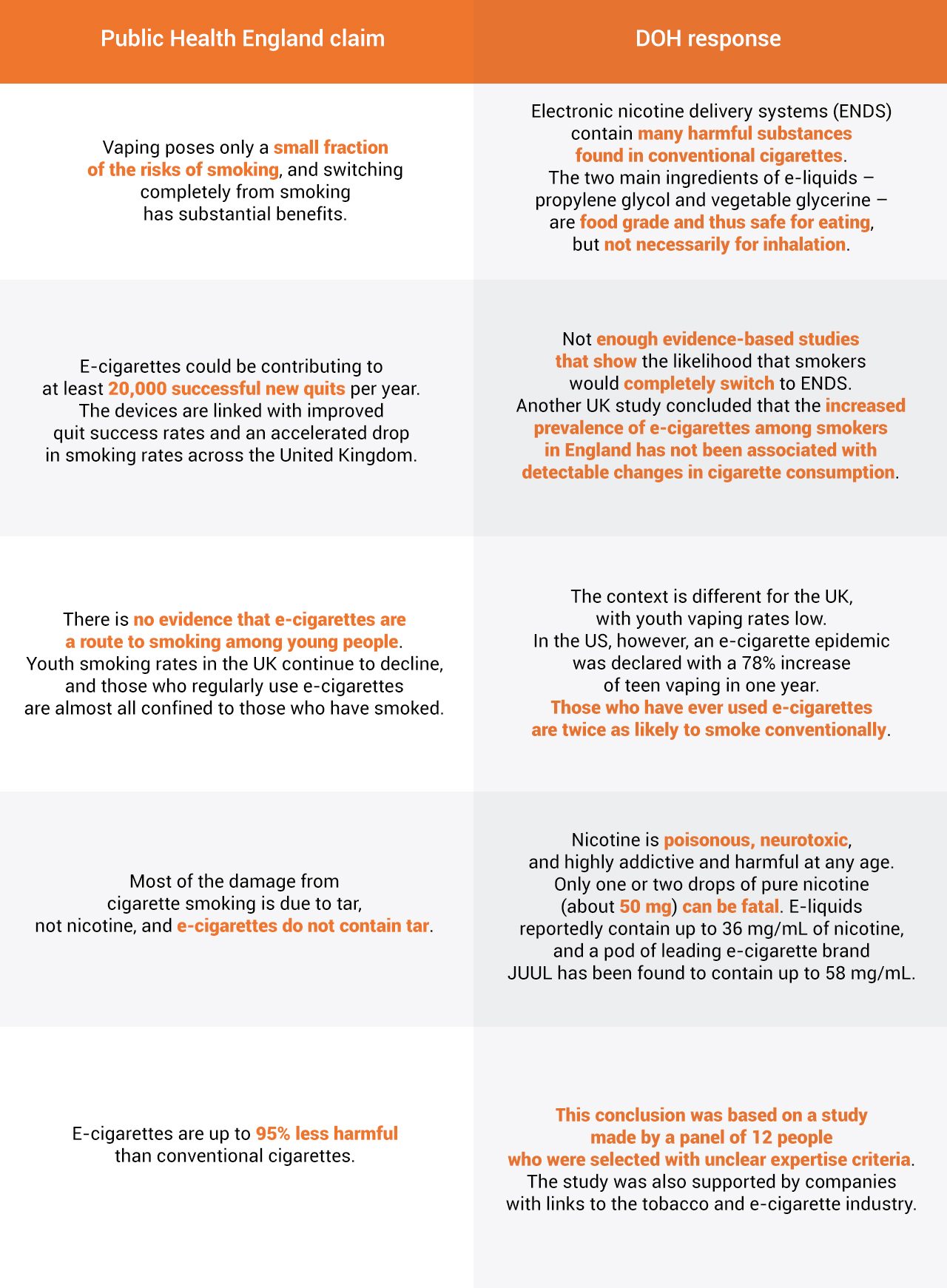 MANILA, Philippines – EJ, not his real name, lit his first stick at 17. After almost 4 years of smoking, he decided to try a vape device. He said it was time to quit. “E-cigarettes seemed healthier,” he said. “Plus a big factor, too, is that it doesn’t smell.”

“One of the differences that made me opt for vaping instead of cigarettes is, if I remember correctly, the secondhand smoke isn’t as toxic, and there are way less harmful chemicals present in vape than in cigarettes. I mean, if I save myself and the people around me, then it’s a win-win,” said EJ.

For a few months, he used both traditional sticks and his vape. Now he vapes purely, but the end of smoking altogether doesn’t seem to be in sight.

“I haven’t really thought about stopping my vaping. It’s usually when I drink or when I need peace of mind – the same way I smoked before. For now, I’ve only just switched means to get the sensation,” he said.

“I don’t know how well I am on the road to totally quitting.”

EJ is one of the roughly 180,000 adult electronic cigarette users in the Philippines. There are also an approximate 360,000 youths reported to have ever tried an e-cigarette, according to a 2015 World Health Organization (WHO) report.

President Rodrigo Duterte’s vaping ban in November 2019 came after the first e-cigarette or vape-associated lung injury (Evali) case in the country. In the United States, a vaping epidemic was declared by the surgeon general after at least 39 died and 2,000 became sick due to vaping-related lung illness.

Smokers who are looking to stop are also significantly joined in the market of e-cigarettes by young people. With e-liquids or “juice” flavors that range from sour candy to blueberry cheesecake, it’s hard to blame kids for wanting to try vaping. The lack of burning tobacco may also lead people to believe that e-cigarettes are safe.

But are they really?

Electronic nicotine/non-nicotine delivery systems (ENDS/ENNDS) have at least 9 bills on their regulation pending in Congress. Health professionals and the vaping industry engaged in a tug-of-war of negotiating excise taxes, and now regulations. If it were up to the health groups, an outright ban of vaping devices would be best.

Possibly the most-cited data finding that pro-vaping groups use to justify electronic smoking as being a “safer” alternative is from a study by Public Health England (PHE). This study found that, among other claims, e-cigarettes are up to “95% less harmful” than traditional cigarettes.

Research on e-cigarettes may not yet be as extensive as available information on cigarettes, but tobacco cessation expert and pulmonologist Maricar Limpin believes that for as long as there is potential for harm, doctors are “morally obligated” to advise against the use of vape devices. (READ: E-cigarettes: 5 things to know)

The Department of Health (DOH) provided Rappler with a report focused only on debunking the claims of the PHE study. The graphic below shows key findings and how the DOH responded with “updated evidence.”

The DOH acknowledges that e-liquids and their resulting vapor are less harmful due to lower levels of carcinogens (cancer-causing substances) compared to cigarettes. However, they still expose users to high levels of toxins that may increase the risk of heart and lung disease.

Limpin said that lower concentration of chemicals does not necessarily mean less harm. Consuming poison even in small amounts could eventually kill a person.

American academic and tobacco control activist Stanton Glantz also said e-cigarettes may expose users to lower levels of some toxicants in cigarettes, but they also contain higher levels of toxicants not even found in traditional cigarettes. A US study found that chemical burns found in patients were associated with e-cigarette use.

Bystanders are also still in danger of exposure to toxicants through secondhand emissions from ENDS, although at lower levels than cigarettes.

But is it beneficial to do a complete switch?

The US Department of Health reported that e-cigarettes have the potential to benefit non-pregnant adult smokers if used as a complete substitute for regular cigarettes and other smoked tobacco products.

A complete switch, however, has not yet proven to be the norm in the Philippines.

In a Senate hearing on September 5, 2019, DOH Undersecretary Eric Domingo said they observed that instead of smokers switching from regular cigarettes to vapes, they tend to use both, switching back and forth. “So hindi naman po talaga nawawala ‘yung paggamit ng sigarilyo – nagiging two products lang ‘yung ginagamit nila,” he said.

(So the use of cigarettes is not eradicated – [the smokers] just use two products instead.)

The Journal of American Heart Association also reported that e-cigarettes “primarily promote switching from one form of nicotine delivery to another, while only minimally supporting complete recovery from nicotine addiction.”

For the health department, e-cigarettes are not only ineffective in smoking cessation, they also pose new dangers to kids who may not otherwise have started smoking. Non-smokers who start vaping are twice as likely to start smoking, and nicotine is especially harmful to teenagers whose brains are still developing.

“E-cigarettes are reducing smoking cessation rates and expanding the nicotine market by attracting the youth,” the DOH said in a report.

The US surgeon general reported that e-cigarettes are the most commonly used tobacco product among the youth, surpassing cigarettes in 2014.

But industry-leading JUUL Labs and other e-cigarette groups are all for the campaign against minors’ use of products. JUUL Labs APAC South President Kenneth Bishop said in a Senate hearing on September 11, 2019 that no company should be selling youth-oriented flavors, but non-tobacco flavors still play an important role for smokers looking to dissociate from tobacco.

“We are continuously active in implementing measures that are in the best interests of helping adult smokers transition away from cigarettes while also protecting against underage appeal and access,” a JUUL spokesperson told Rappler.

Following the passage of Republic Act (RA) 11467 last January 22, all flavored pods and juices apart from tobacco and menthol flavors are officially banned and the minimum age to use or buy ENDS is 21. Vape shops have 18 months to comply, and JUUL has announced its advanced compliance.

How can one actually quit?

Around 77% of the 16 million smokers in the Philippines planned to, or thought about, quitting, but only 4% successfully quit in 2015, according to the WHO. Around 68% attempted to quit without assistance.

The DOH has a smoking cessation program that follows the extensive Clinical Practice Guidelines on the Diagnosis and Treatment of Tobacco Use and Dependence:

The DOH reports a Quitline success rate of 89% in 2018, but the total number of enrolled patients in Quitline that year was a measly 28.

The DOH, however, promotes the program through communication materials in public places like in public transport hubs and in schools, malls, and workplaces. They also campaign through social media, television, and radio, and conduct activities for World No Tobacco Day every May 31st and National No Smoking Month every June.

In any case, the DOH is firm on one thing: e-cigarettes have not been approved as a smoking cessation tool.

Human lungs are made for breathing air. While e-cigarettes may be a less harmful alternative for smokers, absolute quitting is the way to go, and the ENDS industry makes no guarantees a smoker will get there. (To be continued) – Rappler.com