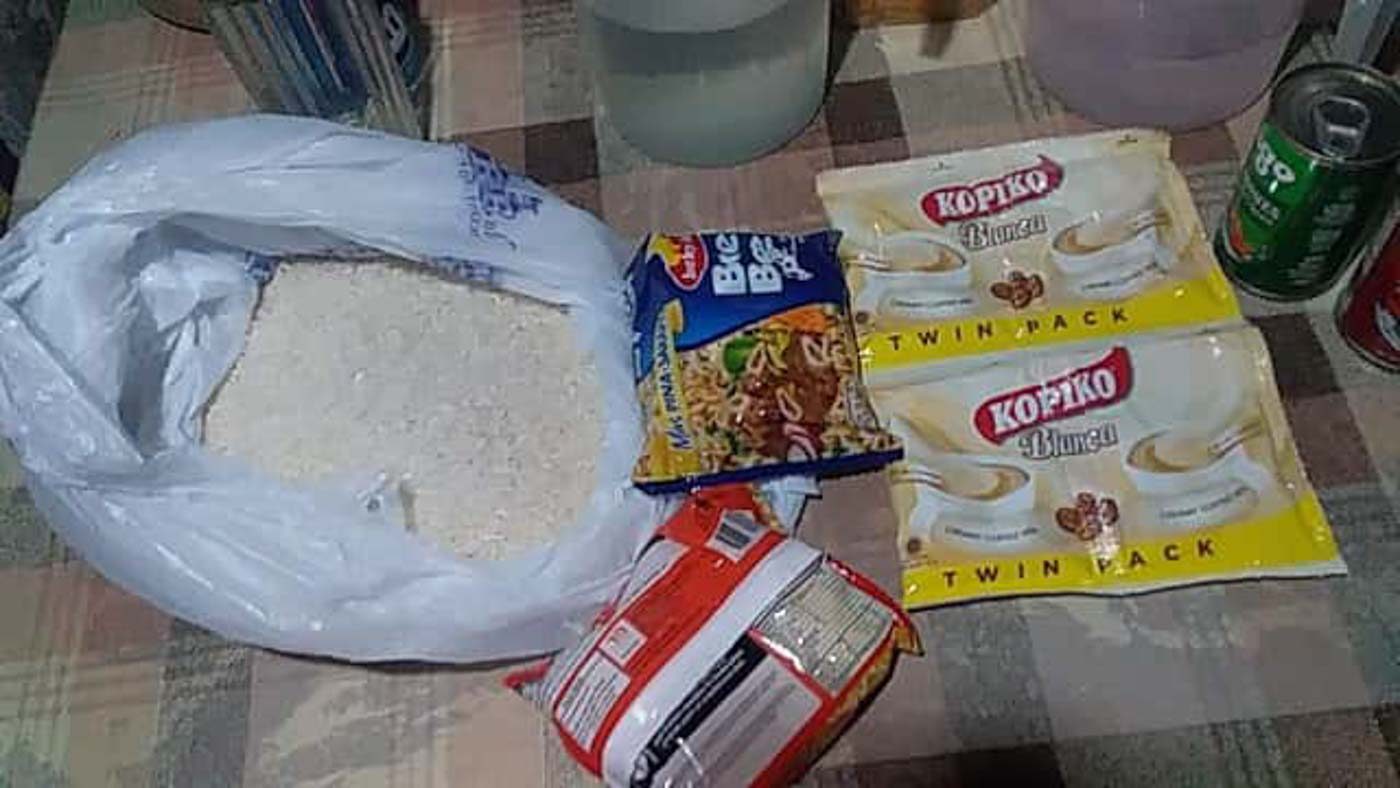 It was April 13 when the barangay officials finally came – two weeks into the first month of the government’s emergency subsidy program (ESP). Members of a Caloocan community messaged each other from across houses as officials told them that since there are more than 1,600 families in the barangay, and only 583 social amelioration cards (SACs) provided, 4 families would have to share one subsidy from the DSWD.

Lorna* and other members of the community knew that this wasn’t right. They all pointed to a video of House Speaker Alan Peter Cayetano, where Cayetano made it clear – one family is to one card.

(When the barangay officials came, the community was talking among ourselves and agreeing that we shouldn’t sign the forms. Everyone should be equal. If the subsidy is P8,000, it should be P8,000. We shouldn’t settle for just P2,000. That’s what Cayetano said, too.)

While some wanted to ignore the forms, others agreed to splitting – they couldn’t afford getting nothing.

The DSWD disclosed that P1.7 billion had been transferred to the Caloocan city government by April 13. Qualified families in Caloocan are supposed to receive P8,000 a month for April and May.

But the officials reportedly left answering none of their questions. They left the forms overnight for the families to group themselves, and said they would come back the following day to pick them up.

Back home, Lorna counted the relief goods left on her shelf. Even if the DSWD cash aid hadn’t arrived, she was thankful they received these from her local government. Lorna decided her family of 4 was having sardines for the night. From the can, she counted the number of fish inside to see if there would be one for each of them.

Lorna’s mother, a senior citizen, is epileptic. Her doctor said she can’t have salty food, but the family can’t afford to be choosy at this time. “No choice,” said Lorna. “Kaysa wala (Instead of nothing).”

Her husband, a factory worker at a food company, has been out of work due to Luzon’s enhanced community quarantine (ECQ). Luckily, he was able to get his salary of P5,000 on March 15, two days before the ECQ kicked in. He earns a minimum wage under a no work, no pay policy.

The family has no savings – every month’s salary is just enough to get by.

Even though she knew it was wrong, Lorna included the names of her family in a group of 4 under one SAC.

Under the Bayanihan to Heal as One Act, the government is mandated to give cash aid to 18 million poor families who were further affected by the coronavirus pandemic. The DSWD has P200 billion to shell out for two months under its emergency subsidy program.

The qualified families are based on the 15 million families included in the 2015 Listahanan – the DSWD’s data collection system that identifies the poorest households in the country, along with 3 million more families based on population growth.

Multiple reports have surfaced that the government’s list does not jibe with the actual number of families in need. The DSWD admitted “shortcomings” in the program’s implementation on April 9. (READ: Duterte chaos leaves barangay officials ‘helpless’ amid lockdown)

As of April 19, the DSWD said more than P22 billion has been released to 4.7 million beneficiaries of the ESP. This translates to only 26% receiving aid, even as the DSWD disclosed that the agency has already downloaded P74.5 billion to local government units (LGUs).

The DSWD said it expects the April payouts to be completed before the month ends.

DSWD Secretary Rolando Bautista assured the public that the cash distribution would be strictly supervised by the Department of the Interior and Local Government (DILG), the Philippine National Police (PNP), and the Armed Forces of the Philippines (AFP) to prevent abuses. But Lorna said the barangay secretary only came with a kagawad and a volunteer.

A member of Lorna’s community called up the DSWD to complain. The DSWD reportedly told them to bring their concern to the DILG. When they called the DILG, Lorna said the DILG referred them back to the DSWD.

DSWD told Rappler it is investigating the incident with the hotlines. The agency also said that any local officials caught abusing the subsidy program would be sanctioned.

On the same day Lorna said the officials came by, DSWD spokesperson Irene Dumlao announced that the agency discourages dividing the subsidies, since the amount per region was determined to be what a family needs to get by for a month. Instead of sharing, families who were not included in the LGU’s list can appeal with local social welfare offices.

Lorna said their barangay captain is nowhere to be found. Every time someone from the community goes to the barangay hall to follow up, Lorna said the staff says he’s away or busy. The last time Lorna saw him was before the lockdown.

Confused who to turn to, Lorna took to social media to look for free legal advice. She found Tugon sa Bayan, an initiative by the San Beda Law Student Government and San Beda Legal Aid Bureau.

Although the national government has a database of the poorest families, the DSWD only transmits the number of forms based on how many they know to be beneficiaries in that locality. The DSWD does not provide the actual list of families that will receive the aid. Bautista said they expected the LGUs to “memorize” the profiles of their constituents.

Lorna strongly believes there is politicking, or “palakasan,” in how her LGU is determining who the beneficiaries should be.

In an April 20 press conference, the DSWD was asked to comment on a suggestion that the agency’s personnel should themselves do the legwork for the program to reduce instances of palakasan.

“Walang manpower ang aming ahensya para gawin ito, kaya humingi kami ng tulong sa DILG at LGUs na tumulong sa pag-distribute ng ganitong subsidy (Our agency does not have the manpower to do this, which is why we asked the DILG and LGUs to help out in distributing the subsidy),” said DSWD Undersecretary Camilo Gudmalin.

Rappler reached out to Tugon sa Bayan for the status of the legal aid for Lorna, but they have not responded as of posting.

29-year-old Jay-j* is a messenger with a motorcycle that always breaks down. He recalls a time while on duty, the motorcycle conked out along Commonwealth Avenue on a rainy evening. He dragged it along for more than a kilometer to find a repair shop before riding back to his Bulacan home. He had a fever the next day, but he laughed at the incident when he recalled it.

Before the lockdown, Jay-j didn’t mind going home every day from the city, because he had a full house with his 3 children to welcome him. His salary wasn’t much, but it was regular and dependable. With the lockdown in place, however, he follows a no work, no pay policy.

On the day President Rodrigo Duterte announced the Luzon-wide lockdown, Jay-j was able to rush out of Metro Manila before checkpoints became strict. The household of 7 had collective savings of P15,000, but Jay-j had to spend P6,000 for his mother’s chemotherapy.

The remaining P9,000 for his household ran out in two weeks.

Jay-j said that just before April, barangay officials went around with supposed SAC forms to survey the neighborhood.

(We were asked to sign a photocopied version of the DSWD’s form, and we noticed there was no seal. So this wasn’t the real sign-up yet, but just a survey…They told us they would still determine who would and who wouldn’t be given aid.)

This was the last time Jay-j saw the officials. Nearing the last week of April, nothing has come back – not even the real SAC forms.

Gudmalin responded to reports of SAC photocopies, saying typically the rule is that photocopying is not allowed. But some local governments may be afraid of damaging the original forms, and so they might photocopy them first and transfer them to the real forms later. “Merong kanya-kanyang strategy (They have their own strategies),” Gudmalin said.

While the community waited, Jay-j reached out to Alex*, a former student whom Jay-j befriended when he was a food server at a university a few years ago. Alex first thought Jay-j was only asking for enough to feed his family.

“In hindsight, the amount was fairly small – P3,000. What touched me to my core was how he split the money I remitted to him and bought for families in his community; he could’ve kept the money for him and his family. So I thought that while the community’s waiting for government aid, maybe we can help them first,” said Alex.

Alex joined hands with two friends who were willing to help with social media promotions and audits. They source the cash through mobile banking, then remitted the donations to Jay-j who handles buying and distributing food. Jay-j took the initiative to lead relief efforts in his own barangay, which continues to wait for aid from the DSWD. 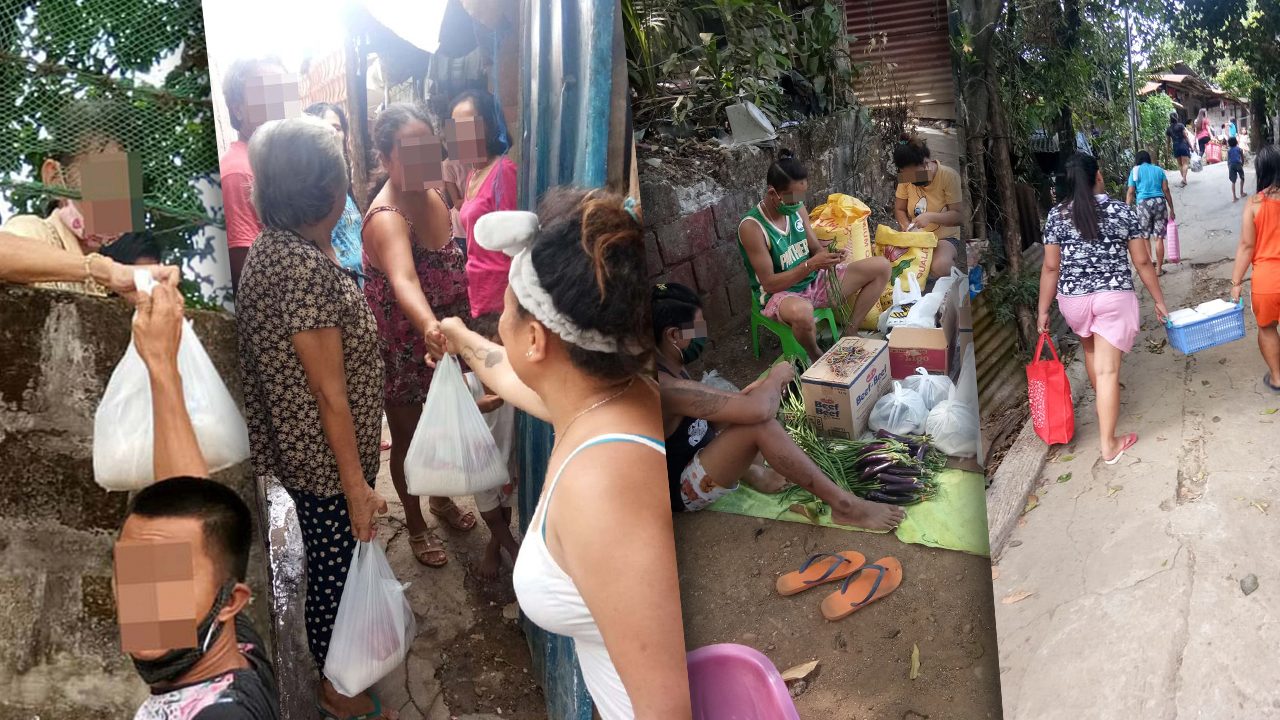 Various private donation drives like Alex’s have sprouted amid the coronavirus pandemic. Earlier, “unauthorized public solicitation activities” prompted the DSWD to remind the public to secure permits to conduct drives, subject to processing fees. Public clamor pushed the agency to take down the posts and study waiving the fees.

“Kung hindi sila nagbigay, ‘di ko talaga alam anong gagawin ko (If the group didn’t help us, I wouldn’t have known what to do),” said Jay-j.

“The government’s response has been slow and a lot of families haven’t been reached by the ESP. So the private sector has to step up, especially given less capacity constraints on their part. For our little operation, it’s as simple as remitting via GCash,” said Alex.

But not every community will be reached by good samaritans.

(I wish the government would make sure that they have representatives on the ground so that they can see the shortcomings and problems in implementation. Because no matter how good the plans and laws are, all those will go to waste if there is no proper implementation.)

Duterte promised aid to all poor families, even those left out of the national list. For those who need food, Duterte said local governments will take care of them. (READ: ‘Walang-wala na’: Poor Filipinos fear death from hunger more than coronavirus)

“Gagastos tayo para sa Pilipino (We will spend for the Filipino),” Duterte declared.

But to date, Lorna and Jay-j continue to wait, along with their families, for their subsidies from the DSWD.

With the future of the Luzon lockdown uncertain after April 30, they can only hope that the aid that government had promised would truly come. – Rappler.com

*Names have been changed at the individuals’ requests for anonymity.

TOP PHOTO: COMMUNITY. A resident of a Bulacan barangay hands over a food pack to his neighbor while observing physical distancing. Photo courtesy of Jay-j