In the fight vs COVID-19, these women mayors didn’t take chances 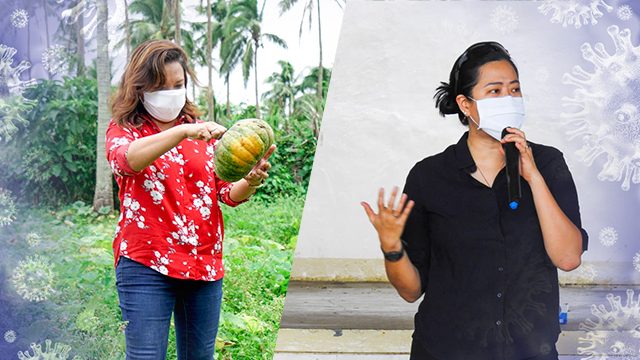 Facebook Twitter Copy URL
Copied
Mayors Trina Firmalo-Fabic of Odiongan, Romblon, and Krisel Lagman-Luistro of Tabaco, Albay, consult their constituents and get creative in their response to the health crisis

MANILA, Philippines – From New Zealand with Jacinda Ardern to Taiwan with Tsai Ing-wen, from Germany under Angela Merkel to Finland under Sanna Marin, much has been said about how having women leaders led to these countries’ successful coronavirus pandemic response.

Filipinos, however, didn’t have to look far to find proof that women who are open to creative solutions and collaboration, women who appreciate data and planning, get things moving in times of crises.

Both Mayor Luistro and Mayor Fabic are members of Angat Bayi, a group that recognizes the fundamental value of women’s political participation in governance.

“It is really rooted in gender norms – how women are raised as caring, empathetic, and responsive…though women are not naturally born with these traits. It’s how we are socialized growing up. All these feminine traits we learned turn out to be very useful in times of crisis such as the COVID-19 pandemic,” said Dr Nathalie Africa-Verceles, director of the University of the Philippines Center for Women’s and Gender Studies (UPCWGS).

All these traits, according to Verceles, are the exact opposite of what’s demonstrated by typical strongmen whom many communities are used to having.

“The feminine traits are weapons that we can use to navigate the crisis in such a way that we are able to meet the needs of everyone…. The strongman leadership will work if we know the enemy. But this one we are still learning from it. It’s something that takes longer and strategic thinking,” Verceles explained.

Instead of downplaying, and cursing, the coronavirus to appear being in control of the situation – as someone we know in Malacañang – Mayor Luistro immediately acknowledged that the unprecedented health crisis would alter the reality in her community. Tabaco is used to complex disasters like typhoons, earthquakes, and volcanic eruptions, but she knew that the health crisis would be nothing like anything they had experienced.

(We are used to emergency response. However, the coronavirus is not environmental. It’s a health calamity. It helped that I’m a nurse. With my public health background, I am exposed to various health issues and concerns.) “In the beginning, there was no policy. For example, we had to run our own quarantine policy. We initially did not know what should be there and what should not be there. What was paramount to us was to keep everyone safe – that became our guide in creating our own set of rules. It was only fairly recently when the IATF (Inter-Agency Task Force) was able to cascade policies,” Lusitro said in a mix of Filipino and English.

Tabaco acted fast, especially when it came to distributing cash aid to those who were in need. The local government had been maintaining a community-based data monitoring system since 2008, so they had reliable and updated data on which families should receive the cash aid.

Because of this, Tabaco was among the first local government units (LGUs) in the Bicol region to complete the delivery of cash aid from the social welfare department.

Mayor Fabic also didn’t take chances in insulating Odiongan from the spread of the novel coronavirus. Her town in Romblon is on an island that can be reached by boat from Batangas, Panay, and Mindoro islands.

As early as January 31 – at a time when the national government downplayed the threat of the coronavirus – Odiongam was already closely keeping tabs of tourist activities – the island had seen visitors from different parts of the world, including from the province of Hubei, China, where the epicenter of the virus, Wuhan City, was. (READ: ‘Travel with me around PH,’ Duterte tells Filipinos amid tourism slump over coronavirus fears)

“Bawat dating ng barko sa Odiongan pier ay tsine-check ang travel history kung may galing sa China…o sa ibang bansa na apektado ng nCov,” Mayor Fabic said in a February 1 post on social media. (For every ship that lands in Odiongan port, we checked if any of them had travel history with China or other countries affected by the outbreak.)

By February 1 – while the national government refused to enforce strict travel restrictions to and from other countries with coronavirus outbreaks – the island municipality established a task force on new infectious diseases, set up checkpoints at ports and between barangays, coordinated with the rural health unit, and constantly updated their constituents with what was really going on.

“There is that belief that men are risk-takers. Would you even go out of the house to go out of the mask? We see leaders like [US President Donald] Trump who don’t like to wear a mask because they see it as a sign of weakness. It’s also how they view the pandemic – as if it’s an enemy that needs to be defeated,” Verceles said, contrasting male leaders with their female counterparts.

According to Verceles, another feminine management style that proved to be effective during a pandemic is the tendency for women leaders to be open to consultation and letting others participate in the decision-making process.

“We don’t need to show that we know everything. We are willing to show weakness. When we decide, we also ask other people and viewpoints,” Verceles said.

In Odiongan, Mayor Fabic noted that there were “many directives from above, but how do you implement these adopting it to your local situation? Are they appropriate?”

She resolved this through a series of consultations with municipal and barangay officials and stakeholders. A lot of the town’s projects during the lockdown were born out of these consultations, including the laboratory on wheels for the elderly, library on the go for children, and the mobile market for residents. The female mayor didn’t shy away from getting ideas from other local chief executives.

“There are also a lot of dynamic men, but I think the trademark of female leaders is that they are more consultative, nurturing, and inclusive. And there’s humility. We don’t mind to look at what other towns are doing. I know I patterned a lot of my programs based on what I saw what worked in other places,” Fabic said, citing the shuttle services and debriefing sessions they provided for frontliners.

In Tabaco, Mayor Luistro, a former congresswoman, shared how she closely coordinated with the 5 other LGUs in the first district of Albay.

“Kapag may directive sa ’taas, ’di kami nahihirapan kasi nag-uusap-usap kami agad. Di kami pisikal na nagkikita. Ang laking bagay na may group chat na,” she said, adding that this helped them ensure accountability and align on local policies. (Whenever there was a directive from the national government, we coordinated immediately to make things easier. We didn’t meet physically. It pays to have group chats during this time.)

These initiatives helped address immediate health concerns in the town of Odiongan when the lockdown started. Even when overseas Filipino workers and other stranded individuals came home, the town maintained its record of zero positive cases.

However, as the crisis became less of a health problem in Odiongan, the next challenge for the town was to help the vulnerable groups who bore the brunt of the economic challenges that resulted from the lockdown.

How would they provide them food?

The solution was a program that hit two birds with one stone: the LGU, using the calamity fund, bought the products that farmers and fisherfolk couldn’t deliver to the public market. These were then included in the relief packs for distribution, providing nutritious and fresh food to the beneficiaries.

Because these commodities were perishable, the LGU came up with a logistical system where packing and distribution to 14,000 to 15,000 households were completed in just a day.

“We were not boxed by the traditional responses during a disaster. We looked into what else we could do and into solutions that could really respond to the needs of the residents…. Because of that, we were able to come up with creative approaches that would address [not only] the very obvious needs of the people but also their underlying needs,” Mayor Fabic said in a mix of Filipino and English.

According to the Odiongan mayor, they were able “to inject 1.7 million pesos into the local economy” through this initiative.

Tabaco also came up with an innovative solution to twin problems: there were women who lost their livelihood during the lockdown, and frontliners needed face masks and personal protective equipment (PPE).

Seamstresses who lost the opportunity of earning from making graduation togas and prom gowns were tapped to produce PPE sets and face masks instead. These were purchased and distributed by the local government.

(It is beneficial to look at problems through gender-sensitive lenses. For example, when it came to our seamstresses, we were able to provide them a source of livelihood through the production of masks. Now, they can earn as much as P7,000 a month.) 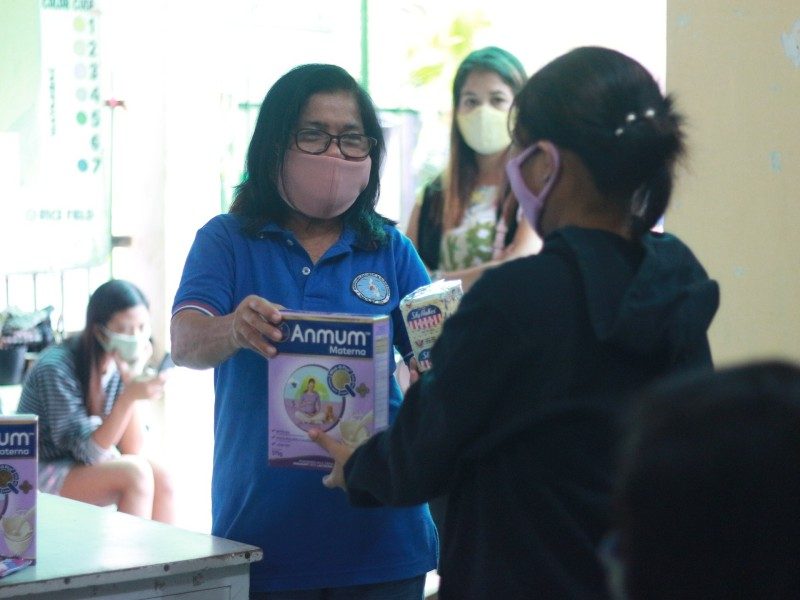 Luistro also described their relief operations as something that isn’t “one-size-fits-all.” There are special interventions for malnourished children and pregnant and lactating women. On top of providing them standard items in relief packs, “malnourished children are given fresh eggs, monggo, and squash. Breastfeeding mothers are given calcium, the elderly are given sweet potatoes and other fresh vegetables.”

Not simply men vs women

Mayors Luistro and Fabic cited their municipalties’ record of zero positive cases even when a large number of residents came home recently through the national government’s Balik Probinsya program.

Another success indicator for Mayor Fabic is that Odiongan residents remained relatively calm. “There were no fake news or panic because we provided regular and timely updates, and we were honest with them,” she said.

There are a lot of lessons to pick up in the stories of Odiongan and Tabaco, especially when trying to understand how female leaders have been effective in their governance. One of them is to simply make space for them.

“Women continue to be seen as unsuited for larger roles in political leadership. Yet the main lesson that we have learned this time is that we can trust our women leaders,” Verceles said.

The fact that there are also other male leaders doing well during this pandemic proves that effective leadership has nothing to do with a person’s gender. Verceles said this should teach the public to “look beyond whether [she or] he is a female or male and focus on what that person can do.”

Verceles concluded, “There is no better time for us to look, listen, and learn.” – Rappler.com