After Yolanda: Gov’t agencies pick up the pieces 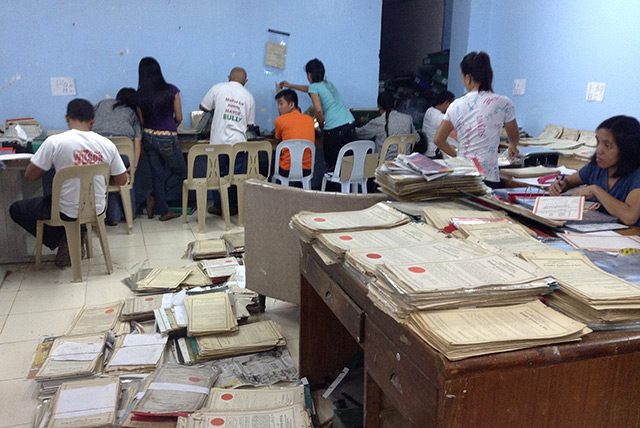 MANILA, Philippines – Many regional and provincial offices of government agencies also bore the brunt of Super Typhoon Yolanda when it struck Eastern Visayas on November 8, 2013. Buildings braced for nature’s wrath, while public records were at risk of being destroyed.

Just like the storm’s survivors, these offices strove to recover from the typhoon’s onslaught. While picking up the pieces and assessing the damage, they assisted affected employees; some even joined in relief and recovery operations.

Rappler talked to 4 agencies to find out the condition of important public documents post-Yolanda, and to determine efforts to resume normal operations.

The Philippine Statistics Authority (PSA) reported that all documents in the local civil registries of Hernani and Lawaan towns in Eastern Samar – around 25,000 birth, marriage, and death certificates in all – were completely destroyed by Yolanda.

After the storm, the PSA, through the National Statistics Office (NSO), started reconstituting these lost records.

“Since we are the central repository of civil documents, we help them by producing xerox copies of the records, which we then sent to Hernani and Lawaan,” said Director Lourdes Hufana of the NSO Civil Registration Department. 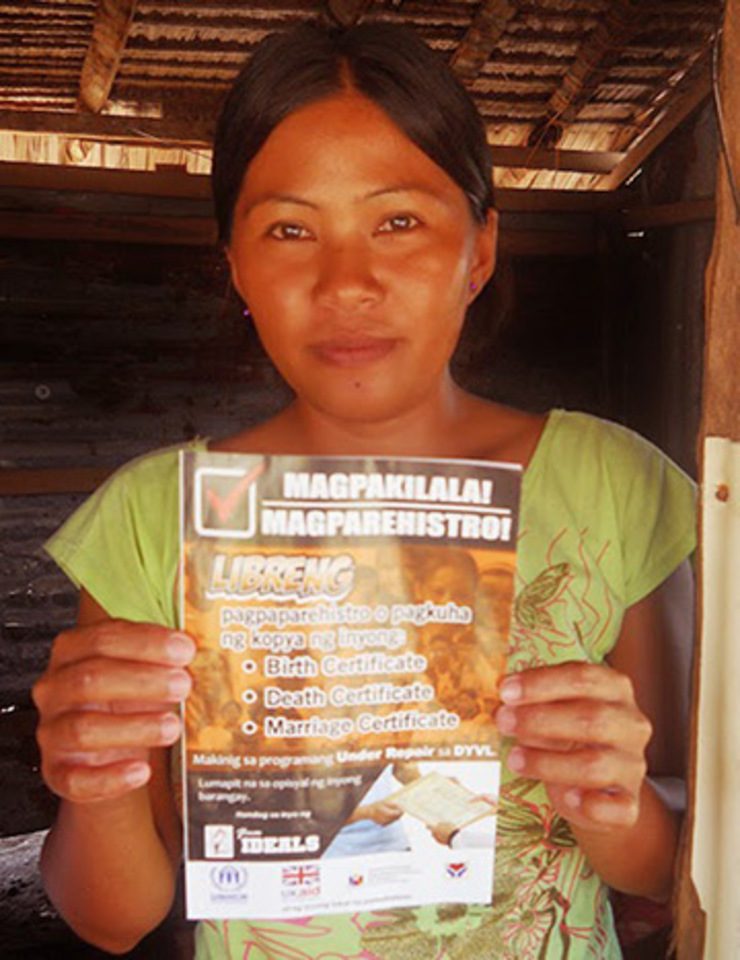 The PSA-NSO also helped assist Yolanda survivors in securing benefits. “If a Yolanda victim had a job or insurance, their dependents could claim benefits but they have to prove that they were the victim’s spouse or child, with the help of marriage or birth certificates,” Hufana explained.

The agency verified the identities of Yolanda survivors with the help of the NSO Central Office and nearby field offices in Cebu and Iloilo, and provided them copies of civil documents.

Through mobile caravans in 20 cities and municipalities in Region VIII, it also conducted late registration for those who lost birth and marriage certificates.

“They neither had shelter nor money after the storm. Why make them go to our offices? So we went to them ourselves to have them registered. But we still need supporting documents from them. It would be problematic to just register them without supporting evidence,” Hufana said.

The agency partnered with the Department of Social Welfare and Development (DSWD), the Department of the Interior and Local Government (DILG), the United Nations High Commissioner for Refugees (UNHCR), and civil service organization IDEALS Inc.

Commission on Audit (COA) employees had little time to rest post-Yolanda. After recovering audit records and office equipment in their offices, they had to monitor Yolanda relief, recovery, and rehabilitation efforts by other government agencies. (READ: COA: Yolanda relief ‘chaotic, crazy’)

The COA-Region VIII office in Palo, Leyte, was partially damaged by the storm. It was also the case for COA offices in Ormoc City and 7 towns of Eastern Samar, as well as for at least 11 auditing offices based in other government agencies in Tacloban City and Palo in Leyte, and in Catbalogan City, Samar.

Sadly, the COA-Leyte provincial office and its local offices in Tacloban City and in Hernani, Eastern Samar, were totally destroyed. The same could be said for 16 auditing offices based in other agencies in the region, as reported by COA to Rappler. Audit records in many of these areas were totally damaged or washed out by the storm surge. COA said that audit teams made an inventory of these records in all government agencies, to see which ones kept copies of a specific audit record or evidence.

Reconstruction of lost records was only possible “if one of the offices who has custody over them was not affected by Yolanda,” said COA.

“If all offices which have simultaneous custody over the records were badly hit, the only available option is for the concerned agency to file a request for write-off of accountability on account of loss of documents evidencing financial transactions,” it added.

To date, no agency has requested assistance from COA-Region VIII in the possible reconstruction of lost documents or records.

COA also said that it has yet to receive any categorical report of any pending cases affected due to lost or destroyed documents. However, some teams are having difficulty performing audits because the disbursement vouchers and its supporting documents have been lost or destroyed.

On November 20, 2013, more than a week after the storm, COA ordered the immediate post-audit of the rescue, relief, recovery and rehabilitation efforts and activities while the state of national calamity was in effect.

In April 2014, COA also issued accounting and reporting guidelines on the receipt and use of the Calamity Fund, cash and in-kind aids from local and foreign sources, and the agencies’ respective budget allocations for the Disaster Risk Reduction and Management (DRRM) program.

In September 2014, COA released its assessment report on how the quick response funds (QRF) of the Office of Civil Defense (OCD) and the donations received by the National Disaster Risk Reduction and Management Council (NDRRMC) were utilized. (READ: COA: Yolanda fund, donations did not reach victims)

Seven registries of deeds (RD) along Yolanda’s path were affected, but only one was greatly damaged: the Leyte Registry of Deeds in Palo town.

Fortunately, only around 800 to 900 original copies of land titles were destroyed there, said Deputy Administrator Robert Nomar Leyretana of the Land Registration Authority (LRA). The Palo RD was within 40 meters of the storm surge path, but a sealed vault – present in all RDs – kept all land titles intact. The land titles that were destroyed “were out of the vault, those that are pending at the workstations of LRA personnel when Yolanda struck,” Leyretana said. These titles could be replaced via judicial reconstitution.

However, because of the experience, the LRA in June 2014 decided to convert to digital format every land title stored in Palo.

The agency partnered with the United States Agency for International Development (USAID) for the scanning and conversion of 223,000 land titles in Palo, for encoding into LRA’s central database. USAID hired and paid for the salaries of the volunteers from Palo and nearby towns, said Leyretana. (READ: What’s with the LRA database?)

As for the owner’s duplicate copy (ODC) of the land titles which Yolanda survivors may have lost due to the typhoon, the LRA thought of a way to speed up the reissuance of ODCs.

Normally, owners have to file in court a petition for reissuance of a lost ODC, as stated in Presidential Declaration 1529. “But since we expect that many have lost their duplicate copies in Yolanda-hit areas, the courts may be inundated with petitions. Considering also that the courts are likewise recovering, their petitions might languish there,” Leyretana said.

The LRA submitted to the Department of Justice (DOJ) a draft Executive Order that would allow people whose ODCs were lost to have it replaced through an administrative reissuance by the LRA, instead of going to courts. It has yet to be approved by Malacañang, but Leyretana noted that the government may be taking its time to check the measure’s legality.

The Commission on Elections (Comelec) said that its local offices in 33 of 136 municipalities in Eastern Visayas, as well as its city and provincial office in Tacloban City, suffered damages due to Yolanda.

Voter registration machines (VRM) in 28 of these towns were also damaged. Books of voters in most of these offices were likewise destroyed, said Comelec Region VIII Director Jose Nick Mendroz.

But Mendroz reported that these offices were able to recover in time for voters’ registration for the 2016 national elections, which started in May 2014.

Election personnel reported back to work by the 2nd week of December 2013. While electricity was not yet available, they continued operations using generators provided by Comelec-Manila.

Replacement VRMs were delivered by Comelec-Manila to affected areas by early February. Destroyed books of voters were also reconstituted by producing copies of provincial or national central files, as stated in Section 40 of Republic Act 8189 or the Voter’s Registration Act of 1996, said Mendroz. – Rappler.com