MANILA, Philippines – What makes the former Jorge Mario Bergoglio of Argentina, now globally known as Pope Francis, click so well with Filipinos – from all ages, Catholic and non-Catholic alike?

Mobbed like a rockstar whenever he goes, the Holy Father has conquered the Philippines to easy submission, bringing back memories of the 1995 papal visit of the lovable late Pope John Paul II.

It took the beloved late pontiff two trips to leave an indelible mark on the consciousness of Filipinos.

But in the case of Pope Francis, who assumed the papacy only two years ago, the excitement and fervor he generates is comparable to that generated by John Paul II, now a saint following his canonization in 2014.

What makes him connect easily with the “selfie” generation, apart from the obvious fact the Philippines is a captive audience with more than 80% of the population Catholics?

Former seminarian and De La Salle philosophy professor Arcadio Malbarosa agreed, adding that his speeches and homilies “are sourced from the heart.”

“When one talks from the heart, there’s a universal connection to it,” Malbarosa said.

The head of the Catholic Church, who is on a 5-day diplomatic and apostolic visit here, attracts hundreds of thousands of people, which the BBC described as “rapturous”. Throngs of people occupy whatever space is available along roads and open areas just to see him in person, vigorously clicking their cellphones, and other electronic gadgets to capture an important piece of history for posterity.

In his homily in Tacloban, which was devastated by Typhoon Yolanda (Haiyan), the Pope said, “I am here to be with you. A little bit late, I have to say, but I’m here.” Those were consoling words for a people battered by a series of disasters.

Speaking in Spanish before priests, religious men and women, seminarians, and survivors’ families at the Palo Cathedral, he said, “I’m truly saddened because I had something prepared especially for you but let us leave everything in the hands of our Lady.” He was apologetic he had to cut short his trip to Leyte.

In Luneta, where he will say a Mass Sunday, the crowd is predicted to swell to around 6 million that could easily better the 5 million people who gathered there  during the celebration of the World Youth Day with John Paul II.

The sea of humanity at the 1995 Luneta event remains to this day the largest papal crowd in history.

His charisma extends even to members of other faiths.

Social media posts and tweets from people who say they are not Catholic described Pope Francis as “inspiring,” “lovable,” and “admirable” especially after he talked about social inequality, injustice, and corruption in his speech in Malacañang Friday.

“I am not even a Catholic but this Pope makes me proud!” says one tweet scrolled on a cable news channel.

The messenger of Good News has not only conquered but also embraced Filipinos. 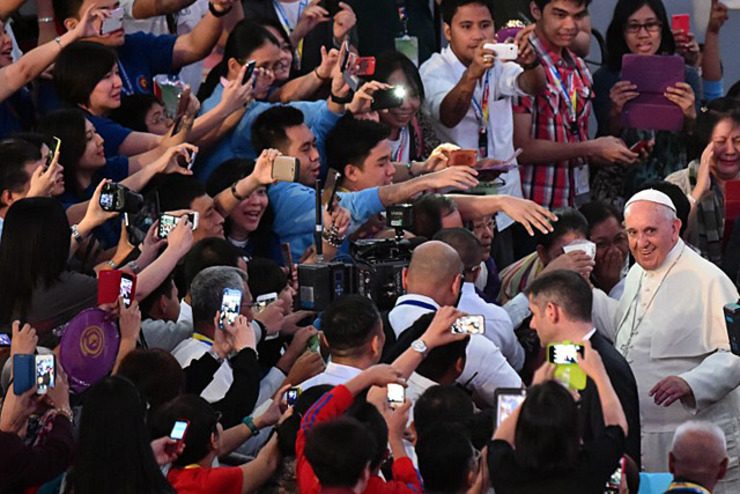 It would be easy to assume that the Filipinos’ excitement stems from the fact that the last papal visit happened 20 years ago. Probably so, but it’s just one of many factors.

Weighing heavily in favor of the Pope’s universal appeal, apart from his easy to digest messages, is that his issues and concerns strike a chord with the masses, which make them identify with him, Malbarosa, who also teaches medieval philosophy, conical legacy, power and social order, said.

“He speaks in behalf of the people. Para siyang naging sumbungan ng mga tao sa kanilang hinaing (He became like a repository of grievances of people.)”

“He does not theologize, he is not preachy, he speaks in a straight-forward manner,” consistent with his pastoral theme, mercy and compassion.

When Pope Francis spoke about the evils of corruption robbing the poor and when he reminded public officials to observe the highest level of  “honesty, integrity and commitment to the common good,” Malbarosa said the Holy Father “is speaking for those who cannot find their voice.”

In the Pope, the Filipinos found a “mediator’ in the same way that Filipino Catholics see the Virgin Mary as bridge to Christ and God.

Even President Aquino may have found a listening ear in him, when he unleashed a tirade on Filipino bishops who were fond of criticizing him.

“In contrast to their previous silence, some members of the clergy now seem to think that the way to be true to the faith means finding something to criticize, even to the extent that one prelate admonished me to do something about my hair, as if it were a mortal sin,” Aquino complained before the Pope in Malacañang.

When he spoke to the clergy about the dangers of “certain materialism which can creep into our lives and compromise the witness we offer,” the Pope was acting as the head of the institution who is fully aware of what ails it.

Self-criticism is not an established norm in the monolithic church, but the Pope appears bent on changing that.

Perhaps what immediately endeared the Pope to Filipinos is that from the very start, he has expressed desire to comfort the victims of Yolanda and fulfilled that promise.

And framing his messages with the economic reality marginalizing the majority poor, it was no surprise that the Pope quickly established a love affair with Filipinos.

It helped that Pope Francis comes from a background that most Filipinos are all too familiar with: social injustice.

“His messages are timely. He speaks about economic progress that does not trickle down to the majority. He talks about social injustice and inequities, issues that Filipinos relate to,” Cuarteros said.

In speaking about materialism in the Church, he wants to pull down the clergy from their high perch, and bring them back to the people whom they have alienated. “He reminded them of the vow of poverty.”

“That’s why he was able to connect easily. He spoke of situations in a language that they understood,” Cuarteros said.

Cuarteros also said Filipinos likewise appreciated the effort of the Pope to speak in English to be able to bring his message to more Filipinos. Pope Francis speaks Spanish and Italian and is conversant in Latin.

If only for that, he deserves the full appreciation of Filipinos. – Rappler.com