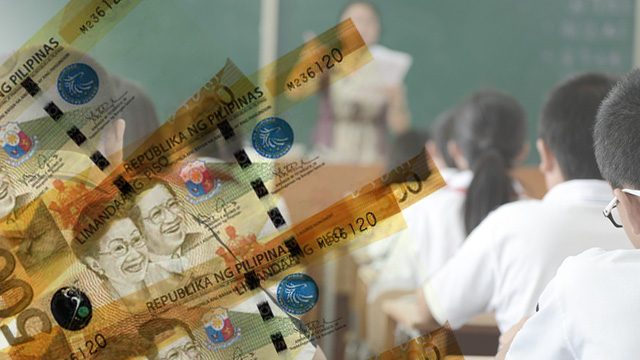 Facebook Twitter Copy URL
Copied
Basic education coverage in the Philippines improved in the last 5 years, children are now in schools at higher rates and at younger ages. The improvements are mostly in elementary schools; however there are only limited gains among high schoolers.

MANILA, Philippines – The government committed, through the Millennium Development Goals, that all children between 5 and 15 years old must be in school. Yet in 2008 nearly 3 million children were not, representing 13% of the school-aged population.

Full implementation of the Kindergarten Law was responsible for gains among 5-year-olds. The law made formal schooling at 5 years old mandatory, free, and the responsibility of the Department of Education (DepEd).

The government has been expanding the DepEd’s budget to support the law’s implementation. Its 2015 budget of P361 billion represented an increase of 18% from 2014; however even with expansion, as a proportion of the national budget it remains about the same, and lower than the budgetary commitments our neighboring countries devote to education.

Expanding the responsibility of DepEd has had an equalizing effect on access to education because it offers more years of free education, specifically at the Kindergarten level. Chart 1 shows the school attendance rates of 5-year-olds by educational level of the household head for 2008 and 2013, only for the poorest 20% of the country.

In 2008, Kindergarten was offered only in some public schools and was not required for entry into Grade 1. Among the poorest families with 5-year-olds, 47.2% were able to send their children to Kindergarten. Within those families, when the head of the household did not finish elementary school, the child is less likely to be in school. But when the head has more than a high school degree the child is more likely to be in school. These show large inequalities in access to Kindergarten.

Chart 1. (Based on income quintile, by education level of the household head) Upon implementation of free and mandatory Kindergarten, 92.2% of 5-year-olds of the poorest families attended Kindergarten. The data show that regardless of educational level of the head of the household, nearly all children of Kinder age in the poorest homes are now going to school.

This is where the 4Ps program, implemented by the Department of Social Welfare and Development (DSWD), must complement efforts of DepEd. For older children, economic hardship is a more important reason for being out of school compared to younger children.

Older children can work and bring income into the family, so attending school is an economic sacrifice. The 4Ps program can reduce the stress of economic hardship. Its recent revision extends assistance to children from 14 years old to 18 years old or upon high school graduation, whichever comes first.

Where are the remaining out-of-school children?

Dropout rates among boys are much higher than among girls, and this gender disparity demands government attention if it wants larger gains in high school enrollment rates.

The 4Ps can improve high school enrollment rates, but this needs to be complemented by improving the education system to create learning environments that improve student retention, particularly among boys. – Rappler.com

Clarissa C. David is a Professor at the UP College of Mass Communication and a fellow of Social Weather Stations Inc. She is also the 2015 Outstanding Young Scientist awardee for social science. Jose Ramon “Toots” Albert is a Senior Research Fellow at the Philippine Institute of Development Studies and served as Secretary General of the National Statistics Coordinating Board.

Image of students from Shutterstock