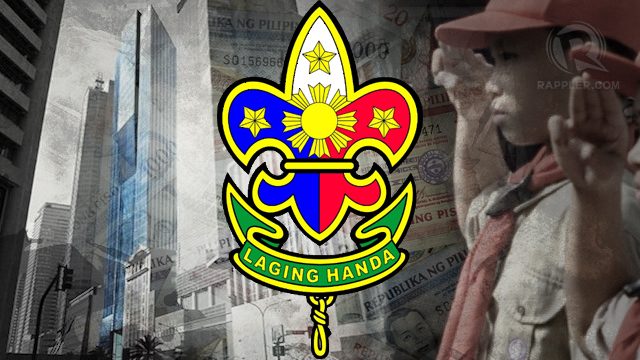 MANILA, Philippines – Seven years after the Boy Scouts of the Philippines (BSP) entered into a joint venture with property developer Alphaland, the Commission on Audit (COA) has yet to see any income earned by the BSP from its P600-million investment.

This, despite a P7-million rental for the use of BSP’s auditorium in Alphaland Makati Place (AMPI), a high-end commercial and residential skyscraper, paid in January this year. (Alphaland’s Mario Oreta revealed this payment during a Senate hearing in February.)

In a May 12, 2015 “audit observation memorandum”, a copy of which we obtained, COA found no record whatsoever of any income or collection received by the BSP from this joint-venture project.

Copies of the “rental contracts covering the purported rental payments from January to December 2014 made by AMPI to BSP on January 23, 2015 amounting to P7,609,920 were not submitted to the Audit Team,” COA said in its strongly-worded 5-page memo. COA resident auditors also complained they were not informed about the existence of these contracts.

They expressed doubt about the “time of collection” because these were “not reflected in the Trial Balance as of May 31, 2014 as part of Receivables and Rental Income.” Their conclusion: “Management either concealed the contract from the Audit Team or the contract never existed from the beginning to the detriment of BSP.”

Apart from this opaque deal, COA resident auditors pointed out that BSP’s share of 15% of the gross floor area of Alphaland Makati Place has not yet been identified. Till today, both parties have yet to agree on how much this would amount to.

In the meantime, BSP has been “deprived of funds that should have accrued to them as well as programs that could have been undertaken with the use of these funds or property,” the COA said.

Thus, the BSP officials may have violated the Anti-Graft and Corrupt Practices Act because they “neglected [their] duties” and entered into a contract “grossly disadvantageous” to government. To support this, COA cited section 3 of the law that enumerates such “corrupt practices.”

Earlier, in a February 2015 letter, COA resident auditors requested BSP to provide them with numerous documents such as:

As of May 2015, COA had not yet received any of these. The audit team believes that these documents were “non-existent and/or not undertaken by Management.”

However, Avisado told us that all these questions will be clarified and resolved when the resident auditors and BSP officials meet in an “exit conference.” This has yet to take place.

Avisado said that BSP has already submitted some of the documents required by COA and updated them on the status of the joint-venture project.

“Our Finance Group is working on the journal entries and preparing the Collection Report…It includes…all the payments made by Alphaland Makati Place for the area that they are occupying,” Avisado wrote us in an e-mail.

“Every month, the BSP sends a Statement of Account for the payment of monthly rental to Alphaland Makati Place and, so far, they have been up to date in their payment.”

As for the delayed determination of the 15% share of BSP in the gross floor area of AMPI, Avisado said that negotiations are still taking place. The BSP management committee, headed by former Governor Roberto Pagdanganan, is on top of this.

But more questions crop up as findings of the Anti-Money Laundering Council submitted to the Court of Appeals show business relations between two key figures who sealed the deal.

When former Makati Vice Mayor Ernesto Mercado exposed this questionable project in a Senate hearing, he mentioned that Gerardo Limlingan put the final touches to the agreement, together with Oreta of Alphaland. Mercado was privy to the joint venture since he negotiated it as Binay’s alter ego in the Boy Scouts.

Limlingan, for his part, has been a trusted financial adviser of Jejomar Binay since his days as Makati mayor.

It would later appear, based on sleuthing by the AMLC, that Limlingan and Oreta have active financial dealings. The AMLC limited its inquiry into recent bank transactions of Binay and his suspected dummies, past the 2008 Alphaland-BSP agreement. Still, the construction of the AMPI is ongoing.

Speaking through his lawyer in May 2015, Limlingan, however, denied being a henchman of Binay.

In 2013 and 2014, Limlingan and Oreta had about 4 joint bank accounts with BDO Private Bank, dealing in multi-million-peso deposits and withdrawals. It is unclear what their business relationship is and if these are related to the Alphaland project with BSP.

Roots of the deal

How did this all begin?

The Boy Scouts is rich in land but poor in cash. The organization thus decided to make the most use of its prime property, a one-hectare lot on Malugay Street corner Ayala Avenue Extension in Makati by entering into a partnership with Alphaland. The land was then valued by appraisers of Alphaland at P600 million. (READ: Did Binay use Boy Scout funds for 2010 bid?)

The joint venture agreement allowed Alphaland to construct buildings and, in exchange, pay BSP a 15% share of the gross floor area, apart from rentals for the use of space owned by BSP.

It surfaced during a Senate hearing that the land could have fetched a much higher price of P1 billion when the deal was inked in 2008. After grilling BSP’s Avisado and Oreta of Alphaland, Senators Sergio Osmeña III and Juan Edgardo Angara found the Boy Scouts to have been “shortchanged.”

Moreover, Alphaland had not paid any rentals in 2014 but was apparently forced to do so after Mercado alleged that Binay personally benefited from the project. A day after Mercado blew the whistle in January 2015, Alphaland paid BSP P7-million in back rentals.

More than 3 months after the Senate inquiry, both parties have yet to sort things out. And COA is tightening the noose on BSP which has not been fully transparent. – Rappler.com