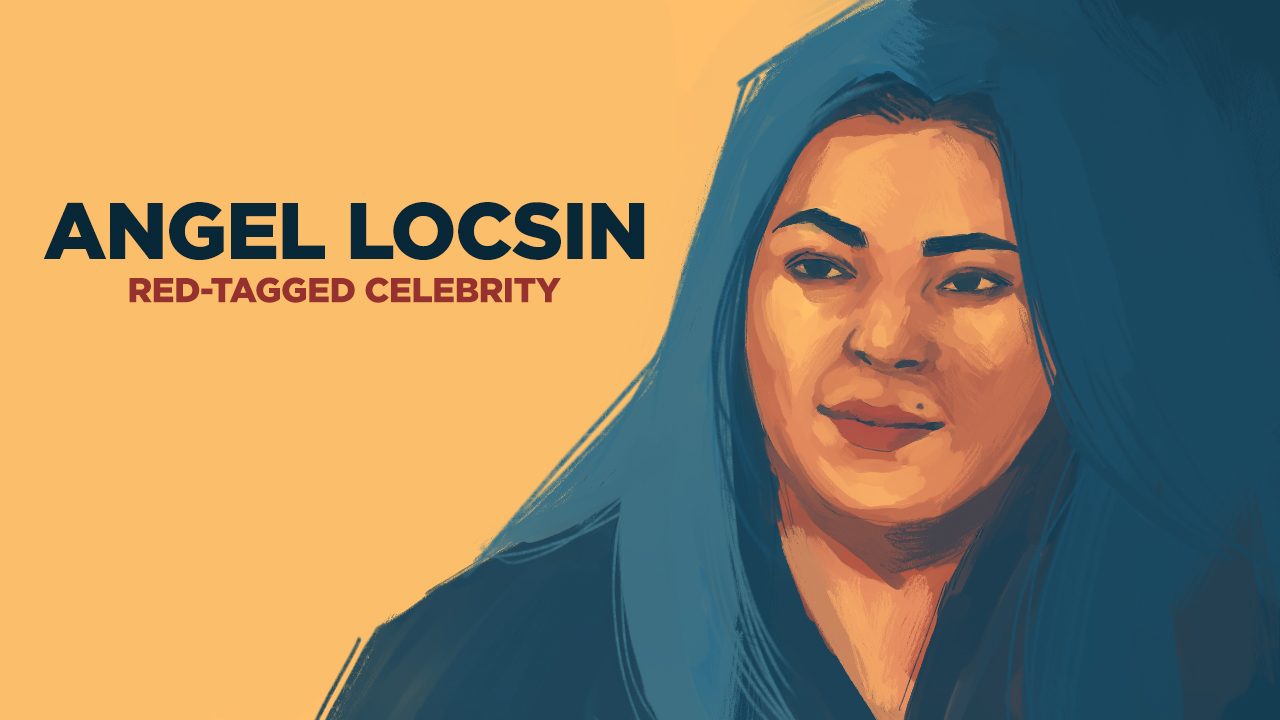 Facebook Twitter Copy URL
Copied
Faces of 2020: Instead of basking in the limelight, actress Angel Locsin has gone out of her way to help Filipinos in distress. So when some overzealous quarters tried to portray her as an enemy of the state, it did not stick.

The most recent TV series Angel Locsin starred in was the 2019 ABS-CBN hit The General’s Daughter. In it, she played an army nurse whom a military general was training to spy on his enemies.

In 2020, ABS-CBN was taken off the air, and Locsin became the subject of a military general’s insinuations that her sister and nephew were communist rebels, and that she supported them.

Under the Anti-Terrorism Law enacted this year, giving support to terrorists makes one guilty of a crime. Since the government considers the communist-led New People’s Army (NPA) a terrorist group, anyone found supporting it may be accused of terrorism, too.

A hero on- and off-screen

Emblazoned in Filipino popular culture as Darna, the onscreen superhero in red, Locsin has earned even deeper respect from the public for her altruism in real life. In 2019, Forbes named her one of Asia’s Heroes of Philanthropy.

What could be more endearing than a superstar trading her glamor for a volunteer’s Red Cross vest to distribute relief goods during calamities, or for a plain hijab to bring aid and good cheer to refugees in a war zone, as Locsin did in Marawi City in 2017?

Forbes said Locsin has donated as much as P15 million over the past decade to causes such as education, indigenous peoples’ rights, and ending violence against women and children.

If just for these, no military general would take offense at Locsin. The thing is, Locsin makes a stand on issues and, perhaps more troubling for some people in the defense establishment, she lends her starlight to her nephew (yes, not uncle) Neri Colmenares, the leftist Bayan Muna stalwart, to help him win elections.

At a Senate hearing in November, Lieutenant General Antonio Parlade Jr, spokesperson of the government’s anti-communist task force, clarified that he never accused Locsin of being a member of the NPA. It was her sister Ella Colmenares whom the general said was with the NPA.

Locsin has repeatedly stated that neither she nor any member of her family is involved with the NPA. She called on red-taggers to stop, because what they were doing put her and her family’s lives in danger.

The incident also made Locsin wonder whether she should stop her philanthropy, fearing the people she would help would be red-tagged, too.

A fight he can win?

President Rodrigo Duterte wants a legacy to leave behind, and he has decided it would be to stamp out the communist insurgency before he steps down in 2022. Again, the irony – he used to claim to be a communist himself, and even welcomed leaders of the communist movement to Malacañang when he came to power in June 2016.

But many things have gone topsy-turvy since then. Peace talks bogged down, the war on drugs did not end drugs, Red China is in the West Philippine Sea, and COVID-19 continues to pose a mortal threat to all Filipinos.

What Duterte needs is a fight he can win. The military assures him they can beat their bitter old enemy, the NPA, if they can only ferret out all its supply lines and cut them off.

And so the inquisition has spilled into anything that can be colored red. In October, Parlade warned actress Liza Soberano and Miss Universe 2018 Catriona Gray that associating with the progressive Gabriela Women’s Party could get them in trouble, or even killed in armed combat. He said Locsin would know what he was talking about.

(So what if they join Gabriela? Is that bad? Is that communist? No.)

(Why suppress them? Why red-tag them? Why say they’re communist? Because Gabriela tells the truth?)

It’s the same aversion to dissent and truth-telling that he witnessed during Martial Law but worse, Lamangan said.

Speak in public about social ills, corruption, anything unflattering to the government, and it will tag you as an activist, a leftist, a communist – as if these 3 things mean the same thing.

“Kalokohan lahat ‘yan (It’s all madness)!” Lamangan exclaimed. If anything, all this red-tagging betrays a paranoid and unraveling administration, he added.

Any consummate artist like Locsin will keep wanting to immerse herself in society because it is the source and object of her artistry, said Lamangan. And if the artist sees something wrong, won’t it inform her art and, in Locsin’s case, her public service?

Authoritarian regimes should know better than to target artists because history has shown that it is bound to backfire, said Chris Millado, vice president and artistic director of the Cultural Center of the Philippines.

The Marcos regime’s suppression and control of the media drove artists to find alternative platforms to tackle social issues. It led to the birth and heyday of social realism in different art forms in the Philippines, from paintings to songs to movies. It put forward the very things the dictatorship wanted shushed, Millado told Rappler.

“Just pushing through the very questionable agenda of this red scare, red-tagging sponsored by certain agencies, this will just basically open up their own weaknesses and their own fears, and then push artists and alternative artistic expression to find even more powerful forms of pushing back,” Millado said.

National elections are a year and a half away and political interests are surging. Millado thinks this is what red-tagging is ultimately about.

“Part of it is, of course, discrediting dissent,” said Millado. People in power want to stay, and they don’t want any unflattering talk about them going around, even if it’s true.

But it’s not just contrarian views, novel ideas, or artistic expression that are under threat from red-tagging. This year, several activists tagged by the government as having ties with the NPA were killed either in encounters with state forces or by unknown assassins.

“It puts reputations in danger. It puts lives in danger, especially in the context of the Anti-Terrorism Law. It definitely has no place in democracy,” Millado said.

Parlade has patched things up with Locsin, but some of the damage done to the celebrity’s reputation may prove difficult to fix. Internet trolls continue to disparage her and make false claims about her.

And yet Locsin’s handling of the ordeal – composed but defiant, setting the record straight – boosted her credibility, and endeared her more to those who understood the situation.

This is a celebrity who, instead of basking in the limelight, has gone out of her way many times over to help her countrymen in distress. So when some overzealous quarters tried to portray her as an enemy of the state, it did not stick. No act with an implausible script can go on for long.

Angel Locsin is ending 2020 with acclaim not just for her onscreen performances, but for what she has accomplished in real life. LionhearTV named her one of the Most Admired Celebrities of 2020, and EdukCircle recognized her as the Most Influential Celebrity of the Decade. – Rappler.com