Facebook Twitter Copy URL
Copied
Arnel Bile proves he deserves a second chance. He finishes college at the top of his class.

MANILA, Philippines – Among the goals of prison life is to reform societal deviants and then release them once they are ready to rejoin society.

That’s what happened to Arnel Bile, who not only proved he deserves a second chance, but that he can also complete college at the top of his class.

On September 13, heaven was glad with Arnel because he was finally able to leave behind the bars of Bilibid. He was among the 371 persons deprived of liberty (PDLs) released by the Bureau of Corrections (BuCor) under certain conditions or the Good Conduct Time Allowance law.

Arnel said his sentence had expired. An Albay native, Arnel relied on a “buy and sell” scheme before his detention. He said he would buy various products and sell them to his customers. His life was simple then – and he used to be content with that simple set-up.

But at 20 years old, Arnel was jailed for homicide. He was sentenced to 11-17 years of imprisonment, and was later transferred to the New Bilibid Prison.

Out of respect for his privacy, Rappler will no longer mention the details of his case.

Since 2011, Arnel has been behind bars – alone and surviving the challenges inside prison. He left behind his mother, live-in partner, and his child, who was only a year old when he was arrested.

Arnel said his partner left him, while his child – now 12 years old – never got to know him. He literally held on to his child’s photo while he was serving his time – and it was the only thing that connected them while he was away for 11 years.

According to Arnel, he has no idea what his child looks like now, and unfortunately, the same goes for his child. But despite this, Arnel said his child inspired him to redeem himself, reform, and aim for greater heights.

“Kaya talagang nagpupursigi ako. Para kung saka-sakali man na magkita kami, may maipagmamalaki ako sa kanya (That’s why I really pushed hard. So if ever we will see each other, I will have something he/she can be proud of),” Arnel said. 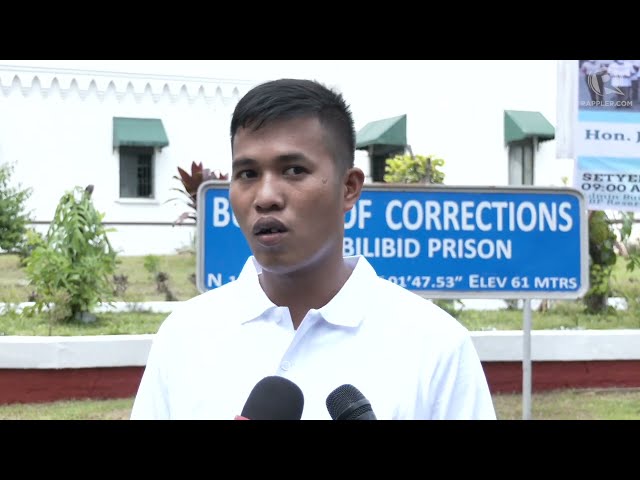 While in prison where violence and uncertainty are common, education became Arnel’s weapon. Inside Bilibid, Arnel said he was inspired to study.

“‘Yong edukasyon, ‘yon ang una kong pinuntahan na alam ko na ‘yon ang makakatulong sa akin para ‘di mawala ako sa sarili. At para rin makatulong ako sa aking pamilya (Education is the first thing I considered because I knew it would be the one to keep me on track. And also to be able to help my family),” he said.

At first, Arnel entered a vocational training program and studied furniture-making. He received a certificate for completing the program. As he discovered new things, Arnel could not help but share them with his fellow PDLs. He taught mathematics and algebra while in prison.

Later on, he decided to enter college and enrolled at the University of Perpetual Help System Dalta (UPHSD)’s Bilibid Extension School. He aimed for a Bachelor of Science in Entrepreneurship degree.

The UPHSD started the program in 1984 with the mantra “rehabilitation through education.” Within the property of the BuCor, PDLs can obtain a bachelor’s degree.

On September 9, Arnel got his degree and received his diploma and transcript of records. But on top of that, he finished a gold medalist – the valedictorian of the Bilibid Extension School for 2022, according to BuCor.

(I proved it now and I am here now in front of you. I am living proof that there is a hope for prisoners like us, that we deserve what they call a second chance. That God has a plan why we are here. God has a plan that explains why things happen.)

After serving his time and finishing college, Arnel said he now wants to start his new life.

Many would think that just like other PDLs, Arnel would immediately rush home to see his mother and child. But that’s not what he wants – he said he plans to take a little bit more time to establish himself.

Arnel said he plans to work for a year or two, save up, and then start his own business. He wants to prove that he is a different man now, matured and educated, he said.

Aside from proving himself, Arnel also wants to show that he is now a man full of dreams.

After facing his greatest challenge in life – surviving Bilibid and reaching his dreams – Arnel said one of the best advice he could give others is to not be prejudiced against PDLs.

(I want to tell them, we PDLs were imprisoned but we’re not bad people. What we did may have been evil, but it is not the totality of our person.)

Arnel hopes that people would be ready to accept that PDLs are still part of society.

“Sana matanggap nila kami sa malayang lipunan nang walang panghuhusga kasi minsan ‘yon ‘yong nagiging hadlang para mapagtagumpayan namin ‘yong isang bagay (I hope they can accept us in a free society without judgment because sometimes, that is what hinders us from being successful in our endeavors),” he said.

As to the family of the person he hurt, Arnel said he is remorseful and hopes they would forgive him.

(In the long time that has passed, I have not been able to ask for forgiveness. I want, even just here, to apologize to you. Even if you’re not ready now, I hope you can accept my apology. I hope the time comes that you will forgive me.) – Rappler.com

Arnel signed a written consent allowing Rappler to interview him and show his face for a video report. The interview was facilitated by staff of the Bureau of Corrections.