READ: Part 1: State-sponsored hate: The rise of the pro-Duterte bloggers

MANILA, Philippines – In the same way that President Rodrigo Duterte’s campaign depended on bloggers to evaluate online sentiment and generate online buzz in the lead up to the May 2016 presidential elections, the Presidential Communications Operations Office (PCOO) harnessed the bloggers’ dedication to Duterte, and to this day, depend on them to play the same roles – and more.

Part 1 of our series, State-sponsored hate: The rise of the pro-Duterte bloggers, focused on how the PCOO has legitimized pro-Duterte bloggers by giving them special access to government officials and resources, consultancy contracts, cash "allowances," and an interim accreditation policy for bloggers to cover the Palace.

These bloggers, who call themselves Diehard Duterte Supporters (DDS), are well taken care of by the PCOO and given unusual privileges, not just because of their constant defense of Duterte, but also because they serve as eyes and ears on the ground for the poorly-led agency under Communications Secretary Martin Andanar.

After Duterte's State of the Nation Address on July 24, the President held a press conference wherein he threatened to bomb Lumad schools for teaching subversion and communism.

“Umalis kayo dyan, sabihin ko sa mga Lumad. Bobombahan ko iyan, isali ko iyang mga istraktura. (I will ask the Lumad to leave. I will bomb their structures.) I will use the Philippine Air Force. You are operating illegally and you are teaching the children to rebel against government,” Duterte said.

The Lumad are indigenous people from Mindanao who have lost their ancestral land over time, have faced persecution, and have suffered human rights abuses as minorities.

Public response, at least among those who were vocal, was extremely negative.

The Communist Party of the Philippines, for instance, called Duterte “The lowest of the low” for his threat, and a “a madman with bombs.” The president of the National Union of People’s Lawyers, Edre Olalia, said the threat was “as monstrous as it can get.” The organization that operates Lumad schools, Alcadev, said the President made the accusations so he “can justify the attacks on our schools and threaten us to bomb our communities.”

Social media was also abuzz with anger. A netizen labeled him a “terrorist”, another called his presidency a “regime of intimidation”, while still another said it felt like “Syria than the Philippines.”

The backlash was so widespread that pro-Duterte bloggers alerted the PCOO through social media officer Pebbles Duque, whose main role is to organize and mobilize bloggers.

“Pro-Duterte bloggers told Duque about [the Lumad backlash] and asked her for a government response,” a PCOO insider said. “Duque then asked PCOO officials. It was only then that they realized they needed to do damage control, and released a statement the next day.”

The statement from presidential spokesperson Ernesto Abella said the threat to bomb schools was because Duterte wanted to protect Filipino youth.

The President "highlights the need to protect our youth and doing so entails ensuring they get the correct education that reinforces the right values that instill love of country and respect for our laws among others, and not rebellion," read the statement.

By July 28, the President himself clarified his statement, saying that what he meant was he wouldn’t bomb the schools while the kids were inside because his main point was, he wanted to protect them.

Multiple sources knowledgeable about the workflow of the PCOO confirmed that Duque is the direct link between bloggers and PCOO officials on a day to day basis, making her valuable to Andanar.

The Lumad bombing statement of the President was only one of many issues bloggers managed for the administration. The pro-Duterte bloggers often alert Duque about issues that gain steam online and that need damage control – from trivial to major.

It was the bloggers, for instance, who called the PCOO’s attention to the recent gaffes of the Philippine News Agency, when it used the Dole pineapple logo as its photo for its recent article on the Department of Labor and Employment, and when it posted a pro-China story.

“They monitor anti-DDS pages too,” an insider-source said. “Their monitoring is better than ours.” 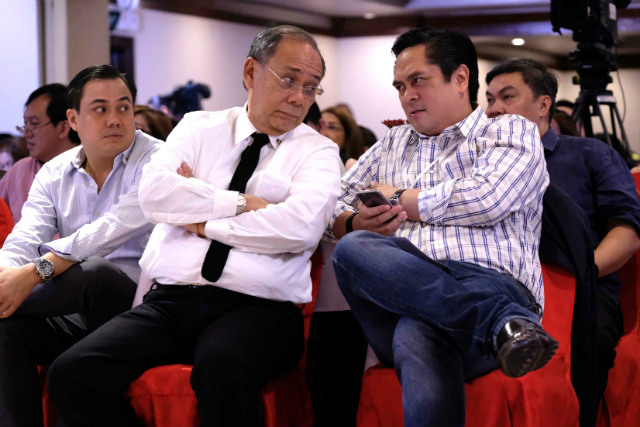 COMMUNICATIONS TEAM. Presidential Spokesman Ernesto Abella (2nd from right) has been given content and messaging after repeated blunders by Communications Secretary Martin Andanar (1st from right).

The insider also explained that Duque was the way through which Andanar managed to get the pro-Duterte bloggers into the PCOO's fold.

“Andanar uses her because she is friends with the bloggers from the campaign period. During the campaign, she helped unite online supporters. Now, he’s using her to get good publicity from the bloggers,” said the same source.

Asked whether the PCOO uses bloggers for crisis management, Andanar answered in the negative: “There is no such thing.”

Aside from monitoring the negative publicity surrounding the administration, the pro-Duterte bloggers are also used by the PCOO to spread positive news about the government.

In the PCOO, Duque is the one in charge of inviting and gathering bloggers to cover government events like the Dutertenomics forum, the Real Numbers forum, and forums announcing the government’s tax reform program, e-power program, and #BangonMarawi event, among others.

The bloggers are expected to post on their Facebook pages about the government events – as public relations officers would – to spread the message and praise government programs and initiatives.

“In every event, about 10-15 seats are reserved for Duque’s bloggers. Sometimes, they don’t fill it up, so bloggers bring their friends instead,” said a source knowledgeable about the PCOO's strategy.

Like social media monitoring, this is also something bloggers can do better than the PCOO, given their online followers.

A look at the posts of some of the invitees indicate striking similarities. Most share information on what tax reform is and rally netizens for their support for the bill, sharing a link to the government's FAQ page.

But there was also propaganda tactics and misinformation spread widely by pro-Duterte groups on tax reform. On the day of the forum, a group called Thinking Minds posted a video on YouTube entitled: "Shameful Yellowtard strategy: Starve the country of cash by OPPOSING TAX REFORM."

The message was simple: if you don't support tax reform, then you support the opposition.

It also alleged that the reason the Liberal Party opposed tax reform was because of a destabilization plot to oust Duterte.

The video starts with soft, heartfelt music, appealing to the emotions. Sentences are then slowly flashed on the screen one by one:

President Duterte has a problem.
He wants to reform taxes…
So he can help the middle class and the poor.
Duterte also needs money to build our infrastructure...
To attract investors to make our country prosperous.
But the YELLOWTARDS are STOPPING the REFORMS.
They are spreading lies to stop the reforms…
...so that Duterte will fail and they will return to power.
He needs our help more than ever.
Support TAX REFORM.

The video then goes on to show spliced clips of the President talking about tax and asking for support; an interview by hardcore Duterte supporter and blogger turned PCOO Assistant Secretary Mocha Uson with a tax expert; and news clips on tax reform from state-channel PTV.

The video was shared by Daily Duterte Facebook page – the admin of which was invited by the PCOO to the forum – to its over 300,000 followers.

It accompanied the post with the accusation: "The Philippines needs to reform its tax system to seize opportunities that will enable us to realize our potential as a 'tiger' economy but the Yellowtards will never allow this to happen because a Tiger Economy will prove how inutile YELLOW liberal politics is."

Interestingly, at least 6 other pro-Duterte groups shared the video as well, with the exact same post as the Daily Duterte page. Other pages that shared it include DU30 Correspondents, Duterte Speaks Now, Balitangbalita Duterte, OFW Global Movement for Duterte, Duterte, and President Rody Duterte. 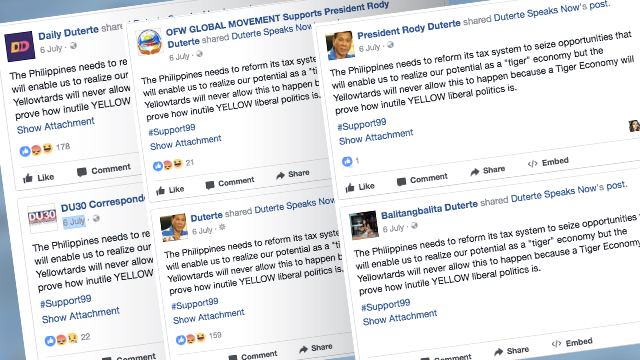 The allegations in the video are unproven; nor does the video provide any facts about a so-called destabilization plot.

Additionally, it is not only Liberal Party senators, who oppose the Malacañang version of the tax reform bill. Other majority senators against it are Sonny Angara and Win Gatchalian because of concerns over its being "anti-poor."

"No, there’s none," he said, referring to special treatment. "Actually, we’re just really open. Even bloggers from the other side, they’re all invited."

“Inviting a few non-DDS bloggers is a strategy by Andanar to show that neutral bloggers are also welcome,” said the PCOO insider.

However, compared to pro-Duterte bloggers, multiple sources who work with Andanar said that the content of these non-DDS bloggers is closely monitored to make sure they are “not anti-government.”

Aside from local bloggers, Duque also helps organize Duterte supporters from across the world.

On August 1, she welcomed them to Malacañang for a Museum tour and an interactive session led by the Office of the Presidential Adviser for OFWs and Muslim Concerns Secretary Abdullah Mama-o.

The same sources with PCOO experience said, the DDS OFWs are a solid, active, and engaged online force, who are deeply devoted to the President and who play the same roles as the bloggers in the Philippines – except on different time zones.

According to an insider, Andanar depends on pro-Duterte bloggers, because within the department, there is no established crisis communication group – aside from Viber messages among official PCOO staff.

“No one takes charge during a crisis,” one source said. “There is no point person, no go-to individual when a crisis ensues. Andanar himself asks various officials to take charge or take over, but only as issues arise, and when he hears that bloggers raise questions.”

The response is reactive, rather than proactive, said the same source.

This is unlike during the presidential campaign when media strategists met regularly and agreed on the message for the day or for the week. Efficient and professional, they also anticipated issues that could blow up and prepared messages to deal with and counter them.

At present, various PCOO officials talk about and vet messaging on the fly only through Viber, before it is turned into a written statement by Assistant Secretary for Content and Messaging Rachel Queenie Rodulfo.

Its current disorganization and lack of coordination means Andanar has relied heavily on bloggers, who monitor what is being talked about online. This is also what led him to tap Duque, who was close to the bloggers from the campaign.

"When Andanar realized her clout, that's when he took her in his inner circle," said a source.

“There is no need for PCOO to monitor social media themselves, because the bloggers do it. This is why he keeps the DDS bloggers close.”

With the pro-Duterte bloggers also spreading information on government programs – regardless of whether they are factual or not – it is easy to understand why Andanar is pushing for their accreditation in Malacañang as well. – with reports from Pia Ranada/Rappler.com