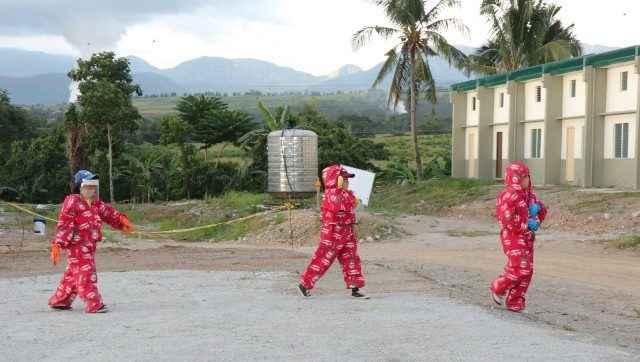 As metropolitan areas like Cebu and Manila were seeing the number of coronavirus cases rise by the hundreds in early March, first in Metro Manila, then in Cebu City, Ormoc City in Leyte province had none.

Mayor Richard Gomez knew that he had to move quickly to stop the virus from entering his jurisdiction.

Residents praised Gomez’s being pro-active in preparing his city like locking down Ormoc even as early as March 13, even before Cebu City and Metro Manila implemented their own lockdowns.

Residents have also lauded the city’s efficient house-to-house delivery of cash and food assistance, eliminating the need for residents to crowd in public spaces.

But nearly 3 months after Ormoc got its head start, the city now has its first case.

And the mayor is not happy.

“We are prepared and we are ready for the worst, but I’m not happy with what happened,” Gomez said about the first confirmed case.

The first case came a week after Gomez slammed the national government for its disorganized implementation of the Balik Probinsya program, a pet program of Senator Bong Go.

Returning residents are supposed to be tested before leaving the big cities, where health facilities are more capable of handling coronavirus cases. But as more repatriated Filipinos in provinces are testing positive, we are seeing that this has not been the case. (READ: OFWs struggle through prolongued quarantine in gov’t VIP treatment)

Gomez said that this could have been prevented with proper coordination with the local government unit.

Balik Probinsya is a program of the national government meant to help those working in the cities, or ex-OFWs, return to their provinces for good. Beneficiaries of this program get a cash allowance and livelihood assistance in addition to transportation back to their towns.

Hatid Probinsya is another program to help locally stranded persons stuck in Metro Manila and Metro Cebu during the lockdown get back to their home provinces. Other OFWs are being sent back to their provinces as well through a separate effort by the national government, in coordination with the LGUs.

As of Monday, June 8, at least 12 of the 51 cases in Eastern Visayas are returnees to their provinces through one of the national government’s initiatives.

“What happened to all the protocols that we’ve been working on? What happened to their protocols that they have been telling us to do if they themselves are not doing the right thing?!” Gomez said in a Facebook post. “It only takes one infected person to get to our city to infect a hundred innocent people bec of carelessness from the national government agencies.” (READ: Ormoc Mayor Richard Gomez slams government’s Balik Probinsya program)

While Ormoc is one of the more progressive cities in one of the poorest regions of the country, even Gomez will admit that it would not take very many patients to overwhelm the city government’s resources and its health system.

“We’re so sorry, the LGU does not have 5-star quarantine accommodations,” the actor-turned-mayor said in his Facebook post.

So far, at least 24,000 OFWs have returned to their provinces after being held in isolation facilities Metro Manila. An estimated 1,500 OFWs will continue to be sent back daily.

If the government continues to send back residents without a guarantee that all are tested, this could spell trouble for rural health systems, most of which are under-equipped to handle severe cases of the virus.

But just how many cases would it take to overwhelm the health system of Eastern Visayas?

Data shows that the capacity of the rural health system in the region is fragile.

According to data from the Department of Health, there are only a total of 16 ICU beds, 60 ward beds and 27 ventilators for the 4.4 million people in the region.

This only accounts for the inventory in public hospitals, meaning that should there be more than 27 critical COVID-19 cases at once, there will be no more ventilators left for the others.

The concern over the lack of facilities in the province had been highlighted by rural health expert Dr Gene Nisperos of the Community Medicine Development Foundation as early as March, when much of the focus was on locking down the big cities.

“We’ll be hard-pressed to catch up…Does your provincial capacity have the equipment? Supplement isolation rooms? Government has 3 types of hospitals, district, provincial and regional hospitals,” he said.

Most provincial hospitals, according to him, are “poorly equipped, rundown facilities and understaffed.”

Nisperos called rural areas the “next big front” in the war against the spread of the pandemic.

“We’re wary the narrative is focused on the hospitals in Metro Manila. It’s only the tip of the iceberg,” he said.

The new cases we are seeing in the regions may only be the beginning.

“There are many provinces where it is more widespread. It can spread fast. And we don’t have enough equipment to cordon them off and contain them,” Nisperos said.

According to latest data from the Department of Health (DOH), Eastern Visayas is also far behind the rest of the country in terms of health worker to population ratio. As of 2018, the DOH estimates there are only 2.6 doctors, 7 nurses, 4.7 midwives, and 1.3 medical technologists per 10,000 people. (READ: IN NUMBERS: What hospitals need to treat COVID-19 patients)

The National Capital Region, of course, has the highest proportion of doctor per population wtih 10.6 doctors, 12.6 nurses, 3.3 midwives, and 3.2 medical technologists per 10,000 persons.

This is why LGU leaders are doing what they can to play catch-up .

According to Gomez, over 215 OFWs are now in isolation facilities in the city, which were completed only last April.

In a small town in Eastern Samar province, health worker Joan said she was nervous about the new overseas Filipino workers arriving in her town.

As of this writing, Eastern Samar has only 11 patients with suspected coronavirus admitted with mild symptoms and one confirmed case, but as Joan knows, any more than that could make things difficult in the province. (Editor’s note: A previous version of this story said there were 11 cases of coronavirus in Eastern Samar. Those were “suspected” cases and not confirmed. This has been corrected.)

In the entire region, there are 92 patients admitted as of writing.

“As a health worker, we’re a little worried with the Balik Probinsya program and other returnees,” Joan said. “We have a lack of PPE (personal protective equipment) and testing kits. The province only has a few,” she said.

Her town, specifically, has only 17 isolation beds for a population of about 5,000 residents.

Joan has been working in the barangay health centers and checkpoints since the pandemic began in March.

The PPE shortage is worldwide, but is magnified in the severely underdeveloped parts of the country.

“For health workers, we don’t enjoy benefits like hazard pay that are supposed to be given to health workers,” she told Rappler in a Messenger interview.

“We’re called to do disinfection, which is too risky for health workers, but we can’t complain. We get called when there are arrivals from Manila or other countries, we’re needed to go to disinfect and conduct the triage,” she said.

“LGUs can be more pro-active by sourcing out PPE,” Nisperos said. He advised that they should not rely on the DOH to provide their essential needs. “So they should arrive already, even before the DOH orders come in.”

Volunteer groups and civic organizations have been stepping up to help distribute PPE sets to the provincial hospitals that haven’t been able to secure enough from the DOH.

Another hurdle the region had to overcome was opening up their own testing center.

They were finally able to accomplish this on May 8 with the opening of a lab in the Eastern Visayas Regional Medical Center in Tacloban City. Prior to this, all samples in the region had to be sent to the already-backlogged Vicente Sotto Memorial Medical Center in Cebu City, which has been swamped with swabs from the densely populated Metro Cebu.

From May 8, when the lab was first opened, there were only 19 confirmed COVID-19 cases in all provinces in Region VIII. That number has doubled as of June 7.

Tacloban reported its first coronavirus case, also a returning OFW, only on June 3.

Sebastian*, a paramedic responder based in Tacloban City, said he feels that while the city should have taken the 70 days of having no cases to prepare, they are still not prepared to handle an outbreak.

“Honestly, we’re not prepared. Even with the establishment of the Barangay Health Emergency Response Team (BHERT), we are not prepared,” Sebastian said in Waray.

BHERT is the first that residents should call if anyone in their household exhibits COVID-19 symptoms.

“Even the proper wearing of gloves and other PPE was not taught to the local frontliners,” the emergency responder added.

“Should the program continue with the unclear and confusing system, no clear coordination with the local government units, everyone becomes at risk,” Sebastian said. “Especially those who have comorbidities or underlying health conditions. There’s also the spreading of rumors (with regard to returnees) in the community, which really affects everyone,” he added.

The cities of Tanauan and Baybay also reported their first cases on May 28. They were both returning OFWs, who were part of the national government’s repatriation program.

But the ones in the toughest positions are the OFWs and locally stranded residents themselves.

After losing their jobs abroad or in the cities, they are stuck in the capital on lockdown – or under quarantine – while waiting for testing requirements to be completed before they can return home. (READ: ‘Walang malapitan’: Stranded ‘probinsyanos’ feel abandoned by Duterte gov’t)

Then they are quarantined again in their hometowns if LGUs are not convinced their documents prove they are coronavirus negative. If they test positive, they may be subjected to an even longer isolation.

Back in Ormoc, where there is only one confirmed case so far, Gomez has already ordered police to tighten the borders once again, and not let residents leave the city, nor let people from other towns come in.

“I don’t want this to spread further,” Gomez said on his Facebook live on June 5, visibly frustrated with the fact that the city’s long coronavirus-free streak was over.

And even after a verbal argument with the Department of the Interior and Local Government’s Secretary Eduardo Año and Presidential Legal Counsel Salvador Panelo, Gomez repeated his call to ask for coordination from the agencies sending residents back home. (READ: FALSE: Richard Gomez won’t accept returnees to Ormoc City)

“To the national agencies, if you bring people to the province, test them first before you send them on the bus or plane. Don’t make them leave if they’re positive,” Gomez reiterated. “Last week, there was only one in Burauen [town], now there are many.”

With the influx of returning residents, and without any assurance from the national government, Gomez knows he is going to have to work thrice as fast to stop a wider outbreak.

“We don’t want the infection to spread further, but what else can you do, it’s already here,” he said. “We’ll just have to work and be more vigilant.” – Rappler.com

Êiver Villegas is a student journalist from the University of San Jose Recoletos, but is currently in Leyte, where he is originally from.