Public school teachers of the Rafael Palma elementary school in Manila report back to work after the DepEd orders them to be in their classrooms even without their students, on April 25, 2022. Rappler

Facebook Twitter Copy URL
Copied
Teachers now have to compete with social media as source of information. The distance learning setup makes it difficult for them to guide students immersed in false information online.

MANILA, Philippines – Some time in March, as he was resting after a grueling day of online classes, social studies teacher Danilo Lumabas saw in his Facebook feed a post by one of his students that made him scratch his head. The post was a lie favoring the Marcos family, common on social media these days.

(I sent the student a personal message. I asked him, “Son, do you know what you have just posted? Have you read something about it?” He answered me, “No, sir.” Then why did you share it? He told me that he just found the graphics interesting and he liked the story it told.)

Although he sent his student links to reference materials debunking the Marcos lies, Lumabas said he didn’t know how the student reacted. What was more alarming, however, was the student told Lumabas he didn’t encounter those lessons in grade school.

There would be many other instances of his students sharing disinformation online, Lumabas said. Remote learning has it made it hard for teachers like him to guide their students since they don’t see the children in person.

Since the pandemic started in March 2020, schools in the country have been doing distance learning, which experts believe has exacerbated the learning crisis in the Philippines.

Filipinos have became more deeply immersed in the internet due to the pandemic, especially since almost everything, particularly classes, shifted online.

Patient Zero: A study on the Philippine Information Ecosystem 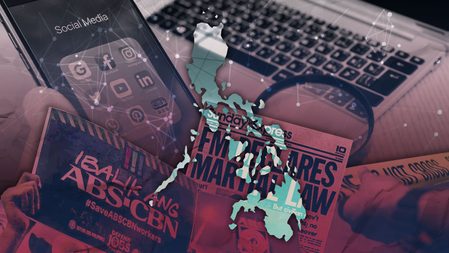 (Teachers have a bigger role to play here. Social media has become the teachers’ competition when it comes to giving information to students. What’s more important is for teachers to be there to correct the false information that students get from online sources.)

Lumabas said there’s no specific subject dedicated to it at lower grade levels, and there lies the problem – because students as young as 7 years old are already attending online classes.

(This batch of students studying during the pandemic spend most of their time on social media. And not all students have the ability to filter information, they just accept as true and accurate what they read. Often, they share these without checking.)

Lumabas said he would always try to insert some sort of media literacy lessons when teaching social studies. But this can only do so much.

A survey done by the Social Weather Stations in December 2021 revealed that a majority or 51% of Filipinos find it difficult to spot fake news on television, radio, or social media.

Lumbas said that it would be better if the K to 12 curriculum undergoes regular review to include important issues that need to be discussed, especially in this age of social media.

In an interview with Rappler, historian and Project Saysay founder Ian Alfonso said that the solution requires not merely adding media literacy subjects to the curriculum. Teachers also need to be “equipped” with tools and ways to spot disinformation online and teach students how to verify malicious claims.

Project Saysay is an advocacy group that aims to “propagate relevant, useful, and inspiring information – in print and online – sourced from Philippine history.”

The Department of Education (DepEd) has actually been conducting webinars on media and information literacy, like the one given to youth leaders in July 2021. In November that year, it partnered with Microsoft Philippines to train teachers and students on the use of latest productivity tools useful in digital education practices. The dissemination and impact of the learnings are not yet known.

But for Lumabas, issue-specific topics on media literacy are being left out. What they need, according to him, is a training program on spotting and correcting disinformation online so they can teach these to their students.

(Our call was to have a training program specific to addressing disinformation on social media. DepEd is actually giving us trainings like INSET trainings for media and information literacy, but these are not relevant to what we need.)

Learning crisis? ‘Not our fault’

But students falling victim to disinformation is just part of a bigger problem. Recently, the issue of a learning crisis became a hot topic on social media and made headlines after a clip from the reality show Pinoy Big Brother went viral. It exposed some teenage TV contestants’ lack of knowledge of basic historical facts. (READ: Briones on ‘MaJoHa’: Learning crisis inherited from past administrations)

In the segment of the show, teen contestants were asked, among other questions, for the popular collective name of the priests who were executed during the Spanish rule: Mariano Gomez, Jose Burgos, and Jacinto Zamora.

The “housemates” answered “MaJo,” then “MaJoHa.” The correct answer was “GomBurZa.”

The priests were executed by garrote by Spanish colonial authorities on charges of subversion arising from the 1872 Cavite mutiny.

Education experts Rappler spoke to said that recent incidents were a manifestation of a “learning crisis” in the country which was exacerbated by the ongoing pandemic.

But Education Secretary Leonor Briones said the current administration should not be blamed for this. She stressed that problems, such as the lack of basic knowledge in Philippine history, were merely passed on to them by previous administrations.

Briones said DepEd only “faithfully” implemented the curriculum that was passed on to them, noting that the problems of the education sector also emanated from the previous administrations.

“I’m just saying that, if you count the years, the years where the learners have been under our direct tutelage, probably would be at the most Grade 4 or 6. I’d just like to point that out. Because we say that education is in crisis, therefore this admin is to blame,” Briones said in a recent press briefing. “We tend to forget that education policy is a result of policies under the leadership made before.”

Meanwhile, Education Undersecretary Anne Sevilla said in the same press briefing that trivia questions asked during that segment in the show should not be used to gauge a student’s intelligence. She noted that the questions were formed with “entertainment” as one of the objectives.

Sevilla said the education approach in the country had shifted to promoting critical thinking instead of mere memorization. She said that basic questions of who, what, where, and when are not a priority in the current curriculum as they now teach students the how’s and the why’s.

Sevilla said that these basic questions are not even asked in the Programme for International Student Assessment, where the Philippines scored the lowest. (READ: PH lowest among 58 countries in math, science – global assessment) – Rappler.com