The man from Mindanao: Duterte’s legacy Facebook Twitter Copy URL
Copied
The first president from Mindanao held a lot of promise, only a handful of which were fulfilled – but it's his cultural and political impact that'll linger in the region and beyond

DAVAO CITY, Philippines – At the Ecoland Terminal in Davao City, Nilo Lampyos, a luggage porter at the transport hub, idled beside his fellow porters just outside the gate through which buses exit.

Times have been hard since the pandemic and while travel restrictions have started to ease, he said it’s another thing that’s keeping travelers from hopping aboard: the rising price of oil. When gas prices go up, he explained, it becomes harder to transport both people and cargo – including the harvest from farms outside the city.

But while life is especially difficult now in the waning weeks of outgoing President Rodrigo Duterte’s administration, Nilo still beams with pride when he talks about his kababayan. He’s especially ecstatic about a younger Duterte’s future role in government.

“Lipay kaayo uy (Of course, I’m happy),” he said, when asked about Duterte’s daughter, Vice President-elect Sara Duterte, who had taken her oath in Davao City on June 19 – nearly two weeks before her term actually begins.

Davao City is the best, he said, and so is Duterte as president. “Tan-awa ang mga kalsada, six lanes na, four lanes na. Sa tanang Pilipinas, siya ra’y naka-nindot ug ingani (Look at the roads, they’re six or four lanes wide. Only he has been able to do that),” said Nilo, although he didn’t say which roads in particular were the most extraordinary to him.

It’s no surprise that Duterte remains popular in Davao, a city he’s governed for over 30 years. But his popularity across the country and especially in Mindanao is almost hard to fathom: 97% approval with just 1% disapproval, according to a Pulse Asia December 2021 survey.

He is, after all, the first president to come from Mindanao and the man who, for better or worse, had managed to put Mindanao and Mindanao politics in the national spotlight – perhaps for good. 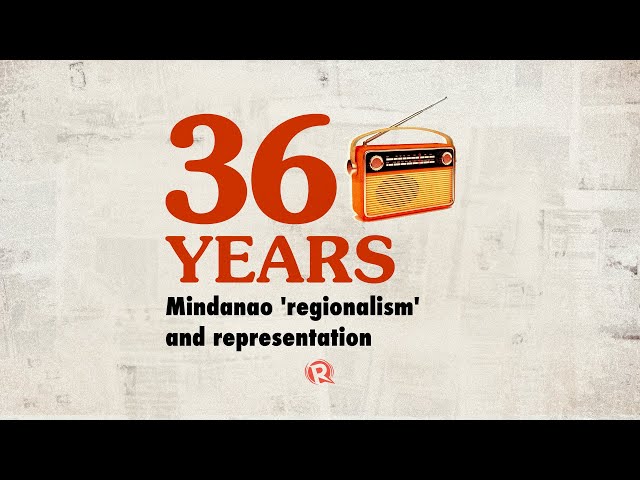 The idea of its very own in Malacañang no doubt enthralled Mindanao and the Bisaya-speaking parts of the Visayas. His promises, too, were just as enthralling.

In his final speech before a sweeping victory, Duterte spelled out, within the first four minutes, why (among the many reasons) he was running: centuries of injustice toward, and strife within, the southernmost islands of the Philippines, traced all the way to the time of the Spaniards.

Six years later, Duterte’s promise of peace in Muslim Mindanao was delivered, but is still work in progress.

Building on the work of presidents before, especially of his immediate predecessor’s, Duterte led the push to finally pass the Bangsamoro law, leading to the creation of the more independent Bangsamoro Autonomous Region of Muslim Mindanao (BARMM).

The work ahead is longer in Marawi City, where strategic parts of the city are still in ruin after a months-long war against ISIS sympathizers in 2017. Duterte exits his presidency with the enactment of the Marawi Compensation Act, which creates a board that will process the claims of Marawi residents whose homes and properties were damaged by the war.

President-elect Ferdinand Marcos Jr., right after campaigning in Marawi City on March 31, had said that there’s “no need” to focus on Marawi rehab since Duterte was already “finishing it.” The compensation act had not been signed when Marcos Jr. made those statements.

The clamor for representation in national politics isn’t just about optics. For Filipinos living in the poorest areas of the Philippines, it’s about getting a chance of getting a bigger piece of the pie – or any piece at all.

Ramon Beleno III, a history and political professor at the Ateneo de Davao University, put it this way: “I’ve traveled around the country for work before. In terms of infrastructure, you’ll really see the glaring difference between infrastructure in Mindanao and [other parts of the country].”

During Kusog Mindanaw, a 2021 multisectoral conference that aimed to form a Mindanao agenda for 2022, Senator Aquilino Pimentel III, erstwhile partymate of Duterte, pinpointed at last five major infrastructure projects that would benefit Mindanao the most through job creation. They are the following:

As of June 2022, none of the five projects have been completed. The Mindanao Railway, by the looks of it, will now be up to Marcos Jr to execute.

It’s this ratio of big promises to actual execution – among other things – that tempers human rights defender and Kagay-anon Carlos Conde’s view of how Duterte has served Mindanao.

“[Duterte] knows many of these gut issues in Mindanao, and he used that in the [2016] campaign. I don’t want to diminish whatever he did or not do but clearly, our region still faces a lot of problems. And that’s something [president-elect] Marcos will have to contend with. Given the history of the Marcos family in Mindanao, I’m not holding my breath,” said Conde in an interview with Rappler.

But Beleno sees it with a different lens. For the Mindanaoans he’s interacted with, “Build, Build, Build” – or infrastructure projects – is Duterte’s biggest legacy. And they’re not even talking about major ticket items.

“It’s the roads, the farm to market roads, the barangay halls, the public school buildings. It’s not the big ticket projects, but the projects that people really feel they benefit from,” he explained.

But it’s culturally – in our politics and in our democracy – that Duterte’s impact is perhaps felt the most.

The 2022 polls, no doubt helped by the brand of one Rodrigo Duterte’s politics, saw political dynasties across the Philippines consolidate their power, either through the sheer number of family members elected or the breadth of their influence.

One does not need to look beyond the top two posts for the strengthening of political dynasties: Marcos Jr.’s is the son of a former strongman, whose sister is a senator, nephew is a governor, and son is a district representative. His vice president is Duterte’s daughter, whose brothers are either mayor or district representative of Davao City.

The Uniteam Alliance, the soon-to-be ruling political bloc which Marcos Jr. and Sara Duterte ran under, is mostly a coalition of old and big names in Philippine politics, many of them dynastic, too.

Coupled with Duterte rhetoric that then translates into blood on the streets, Conde said it’s a heady combination. “That’s a setback for democracy, in that sense. Now, the next time somebody comes along and says, ‘let’s start cleaning up our streets and kill people,’ it will be okay. Kahadlok uy (That’s frightening),” he added.

Ironic, coming from a president from a region whose people have historically been denied their rights. “Human rights have been demonized in ways that we haven’t seen, not even during the [first] Marcos time,” said Conde.

That Duterte’s brand works – and can even help translate into an electoral win for his heir, Sara Duterte – helps solidify the idea of a Mindanao and Visayas vote. Both Marcos Jr. and Sara Duterte won big in most of the Visayas, save for the bailiwicks of outgoing Vice President and losing presidential candidate Leni Robredo.

But his proof of concept is also likely going to lead to the creation of “mini Dutertes,” said Conde.

When he charmed the electorate in 2016, Duterte spoke of peace and safety, even as he vowed a “blood bath” in the name of a now-failed drug war that targeted the poor. After emphasizing his supposed Maranao roots and flexing that some of his grandchildren had Tausug roots as well, Duterte began chanting: “Allahu akbar!”

It’s a phrase that should not be feared, he said, because it’s a declaration of praise for God. “‘Wag kayong matakot kung magsabi ng ‘allahu akbar’ kasi (Do not be afraid to say ‘allahu akbar’) we praise God and when you believe in God, you do not harm your fellowmen,” he said.

After six years of power held by the south, Philippine politics now shifts to the north, or the “Solid North” as Marcos Jr. begins his term. Still, Duterte lingers both in Mindanao and the rest of the Philippines. Then, of course, there’s Sara Duterte. – Rappler.com