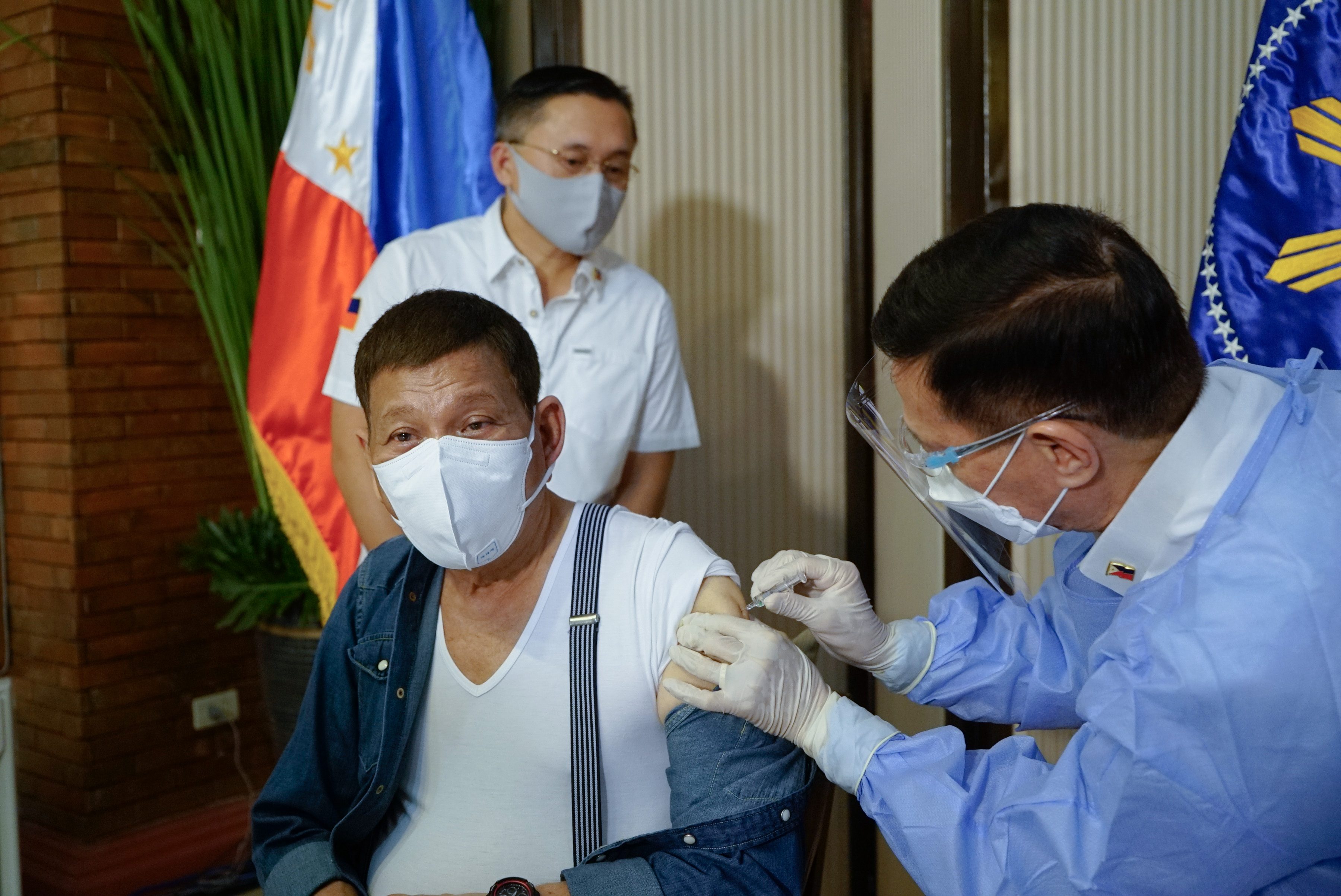 For a leader of a country where vaccine hesitancy threatens pandemic response, President Rodrigo Duterte’s own vaccination against COVID-19 was shrouded in mystery.

Duterte’s vaccination with his first dose of Sinopharm’s vaccine on Monday night, May 3, was sudden, unannounced, and peppered with unknowns.

Compared with leaders of other countries battling significant vaccine hesitancy among their people, Duterte’s vaccination was far from transparent. It has also raised concerns affecting Filipinos’ trust in approved vaccines.

Not least of the roots of these concerns is that the Sinopharm vaccine Duterte received has not even been approved for emergency use in the Philippines.

The day after Duterte’s vaccination, Presidential Spokesman Harry Roque had to address media questions on why the President could not have just been given one of the 3 vaccine brands in the country approved for use among the elderly – the AstraZeneca vaccine, Sinovac’s CoronaVac, and Sputnik V from Russia.

The mysterious ‘1,000 doses’ donated by China

Malacañang reporters were caught off guard on Monday night when Senator Bong Go, Duterte’s longtime aide, suddenly messaged that the President was about to get his first vaccine shot.

Mere minutes later, around 7 pm, Go went live on Facebook showing Duterte with his denim sleeves folded open, about to get injected in the arm by Health Secretary Francisco Duque III.

It took Roque an hour to officially confirm the President got vaccinated.

But there was more the Palace failed to announce beforehand. It turns out, the dose given to Duterte was one of 1,000 Sinopharm doses “donated” by China.

This was revealed only on Tuesday by Roque during his press briefing. Asked when the donation arrived since no government agency had ever mentioned it before, Roque said he did not know.

The succeeding deliveries of Chinese vaccines totaling 2.5 million doses were all procured by the Philippines. The most recent such shipment, comprising of 500,000 doses, arrived last April 22.

If Galvez was referring to the shipments of donated Sinovac vaccines, it would mean the Sinopharm doses had been in the possession of the government for two to three months without the public knowing.

That this is the first time anyone has heard of the donated 1,000 Sinopharm vaccines is surprising given that the government has, so far, never failed to announce impending vaccine arrivals as a way to promote its efforts to sustain the national vaccination drive.

Before Roque’s announcement, most had assumed Duterte received one of the 10,000 Sinopharm doses obtained by the Presidential Security Group (PSG). But the Duterte spokesman admitted something else on Tuesday: those doses haven’t even arrived.

Still, Roque maintained Duterte’s vaccination was “legal” since it is covered by the compassionate special permit issued by the Food and Drug Administration to the PSG hospital covering Sinopharm vaccines.

Then there’s the suddenness of the Chief Executive’s vaccination amid assurances from the Palace that he had opted to wait for an EUA for Sinopharm.

Duterte had initially insisted that he would get the Sinopharm vaccine, preferring it over “products by white people,” prompting Palace lawyers to study if the compassionate special permit covering the PSG’s Sinopharm jabs could cover Duterte since he is technically the commander-in-chief of the PSG.

Then on March 2, Roque announced that Duterte had decided to just wait for the FDA to issue an EUA for his preferred vaccine brand since, anyway, Sinopharm intended to apply for such approval.

But until now, no EUA has been granted. In fact, the FDA says Sinopharm has not officially applied for an EUA.

According to Roque, Duterte just got tired of waiting.

“What changed is the fact that the EUA has been grossly delayed. That’s why the President, when the Chinese government donated, opted to have his vaccination,” said Roque after being asked by Rappler.

Duterte himself commented as he was about to get injected that he had been waiting a “long time” for his vaccination and that his doctors finally gave the go signal after making an “assessment.”

In short, the dose administered to the President was legal because it is covered by a compassionate special permit, but details of its origins are murky since it apparently does not belong to the 10,000 Sinopharm doses secured by the PSG which are not yet in the country.

Instead, the shot came from a separate donation of 1,000 doses from the Chinese government that are said to be already in the country.

Yet from a public relations perspective, Duterte’s vaccination may have been a wasted opportunity to drum up vaccine confidence in a country where as much as 6 in 10 people don’t want to get vaccinated.

Back in February, weeks before the country’s first COVID-19 vials arrived, the Palace announced Duterte was finally willing to get vaccinated in public due to “public clamor.”

Lawmakers and Cabinet members were one in thinking that the sight of Duterte getting vaccinated before the public eye would convince more Filipinos to get their jabs.

Roque and Health Secretary Francisco Duque III vowed to try to convince Duterte, after the President initially said he wished to get vaccinated in private.

Though Duterte’s vaccination was livestreamed on Facebook, it lacked much of the fanfare and preparation of other government initiatives meant to promote the vaccination drive.

There was no ceremony, no heartening speech from the President encouraging Filipinos to get vaccinated, no explanation of what vaccine Duterte was to receive and why.

The livestream was not even aired on an official government platform, since it was only streamed by Go on his page. Malacañang only later on released a video of the event.

Far cry from other world leaders

Duterte’s vaccination and the way it was used as a messaging tool is a far cry from the strategy used by other world leaders.

US President Joe Biden’s vaccination with his first Pfizer-BioNTech shot was covered live by television networks and took place in a Delaware hospital. He took the opportunity to assure Americans that vaccines are safe.

Singapore Prime Minister Lee Hsien Loong was also vaccinated in front of media cameras at a local hospital. He used the event to tell Singaporeans, “It will make us safer, and it will make you and your loved ones safer too. So please take it when you can.”

Meanwhile, Philippine government officials and medical experts have said again and again that convincing more Filipinos to get vaccinated is crucial to achieving herd immunity this year.

A Pulse Asia survey in March showed that 61% of Filipinos don’t want to get vaccinated. An Octa Research survey mirrored those findings with results showing that nearly half, or 46%, of Filipinos shun a COVID-19 vaccine.

Crucially, these leaders all received vaccines approved for emergency use by the their vaccine regulatory bodies, since it’s these vaccines that would be available for their populations.

In contrast, Duterte received a vaccine that only a very limited group of people can use – specifically the PSG and likely their families.

Roque was asked by reporters to comment on whether or not Duterte’s choice of vaccine might lead many Filipinos to doubt the safety and efficacy of vaccines with EUAs, given that the President himself decided to go with a different jab.

Roque’s response was off-tangent at best, contradictory at worst.

“I don’t think it has any effect on vaccine confidence because the people can see that the best vaccine is whatever is available.”

The early weeks of the government’s immunization push had already been overshadowed by the unauthorized Sinopharm vaccinations of Duterte’s security guards. Critics said the controversy gave the impression that the powerful and well-connected could sidestep government processes meant to keep people safe.

Far from holding his guards accountable for the breach, Duterte even shielded them from any congressional investigations on the matter. 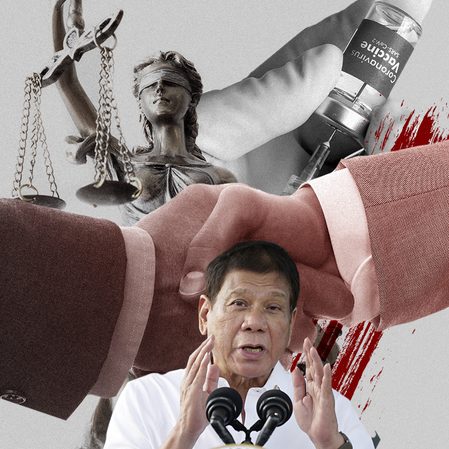 Then after the government said ordinary Filipinos could not choose their vaccine and would have to take whatever was available and approved by the government, the Palace said Duterte can get whatever vaccine he chooses because “the President is the President.” – Rappler.com