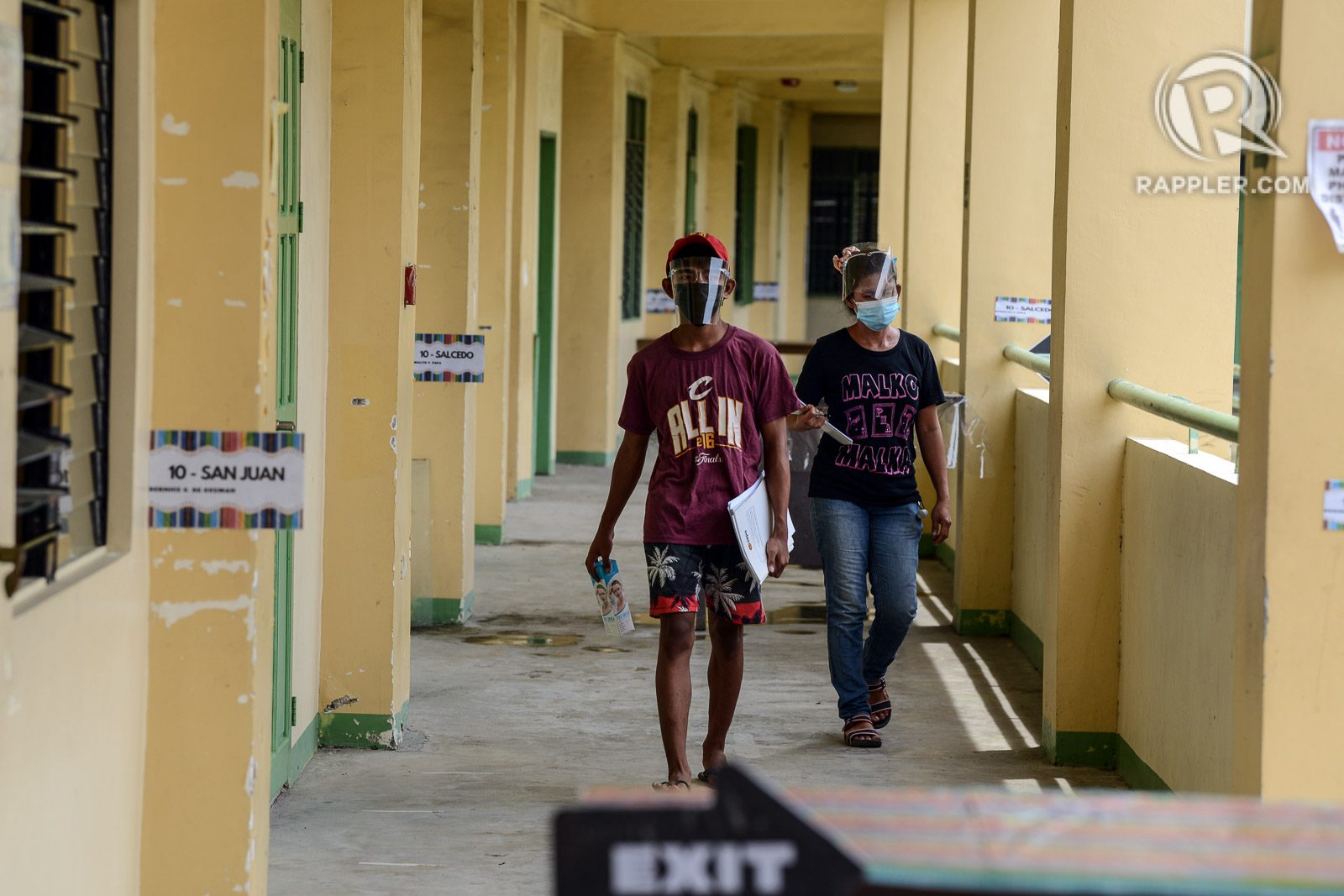 SCHOOLS. Parents of Grade 8 pupils of Noveleta National High in Barangay San Rafael get hold of materials for modular classes in school year 2021-2022.

MANILA, Philippines – To make ends meet, 51-year-old Lorenza Sua-an is selling products online, which she sources from her friends because she does not have enough capital. The meager salary of her husband, who works as a church caretaker and earns P6,000 a month, is not enough to feed seven family members living with them. Of these, five are still studying.

But things will get more difficult for the Sua-an family financially when face-to-face classes resume on November 2. While Sua-an favors the return to in-person classes, rising prices of basic commodities is now a major consideration for financially struggling families like hers.

In her first order as education secretary, Vice President Sara Duterte directed all public and private schools in the country to transition to five days of face-to-face classes beginning November 2. Exemptions can, however, be given in “very specific areas” where blended learning can continue. The Department of Education (DepEd) said it would give the list of areas after their assessment before October 31, also the last day of the transition period.

(Honestly, I am in favor of face-to-face classes. I can’t explain well to my children their learning modules.)

Sua-an said that before the pandemic, she would give her two children, who were in their junior high school back then, P50 for their daily school allowance and P30 for three others, who were grade schoolers. But now, she worries that these won’t be enough for her children to get by each day in school.

While she is somehow in a better financial position compared to Sua-an, Urbano still finds it hard to fulfill the needs of her five children for their education.

Urbano works as a public school teacher but her income is still not enough to feed her family. Her husband works as building maintenance.

“Ako po ay natatakot. Every time na mag susuweldo is Mister, hindi ko na alam paano pagkasiyahin ang suweldo,” said Urbano, when she was asked how she plans to budget their finances when face-to-face classes resume. (I am worried. Every time my husband receives his salary, I don’t know anymore how I will be able to budget it.)

According to the Philippine Statistics Authority, the country’s inflation rate jumped to 6.1% in June. The last time inflation went up this high was in November 2018. Inflation refers to the general increase in prices and fall in the purchasing value of money.

National Statistician Dennis Mapa said that the purchasing power of the Philippine peso has declined. He said that P1 in 2018 is now worth just P0.87 in June 2022. (READ: IN CHARTS: This is how inflation ruined Filipinos’ budget in June 2022)

Sua-an hopes that the government will help poor families like them. While her family is a member of the Pantawid Pamilyang Pilipino Program or 4Ps, this is still not enough for their daily needs.

4Ps is the government’s poverty reduction strategy that gives financial help to extremely poor households to improve their health, nutrition, and education, particularly of children aged 0-14. The 4Ps has two types of cash grants that are given to beneficiaries.

(I hope the government can help us financially even just to provide capital for my online business so that I would have my own and I wouldn’t need to get products from my friends. It will be a big help and at least I would know where to source funds for my children’s school allowance.)

For Urbano, she hopes that the government would strengthen its school-based feeding program to cover all students, not just those undernourished. This way, she only needs to give her children daily transportation allowance.

“Malaking tulong po ‘yon. Kasi pamasahe na lang ibibigay ko ‘pag nagkataon,” Urbano added. (It will be a big help. Because if that happens, I only need to give them transportation allowance. She has five children who are still studying.)

While the government would offer free rides to students when classes resume, it will be limited to Metro Manila only. There are no plans yet if this would be replicated in the provinces, like Batangas where Sua-an and Urbano live. (READ: DOTr to offer free train rides for students, extends EDSA Carousel buses)

In 2018, two years before the pandemic struck, then-socioeconomic planning secretary Ernesto Pernia said that an average Filipino family of five would need an income of P42,000 to live above the poverty line.

There have been studies that showed students are “learning less” under the distance learning setup. Experts and lawmakers were alarmed by the learning losses brought by the pandemic.

“We have always maintained that considering the low level of learning, our students’ need to catch up, and psychosocial needs of our children, we need to shift to face-to-face classes like almost all of the countries in the world. We shouldn’t also disregard the lessons from the past two years,” Philippine Business for Education executive director Love Basillote said.

Over two years into the pandemic, the Philippines is among the few countries in the world where schools have not fully opened for in-person classes. As of May 3, there were about 26,344 schools nationwide that held in-person classes last school year.

Speaking to reporters on Wednesday, July 27, DepEd spokesperson Michael Poa said that they are optimistic that almost all schools would be able to hold face-to-face classes for school year 2022 to 2023. There are approximately 60,000 public and private schools in the country.

School begins on August 22. They are given three options for their transition to five days of face-to-face classes before November 2.

The DepEd said that these options will be implemented by schools only until October 31, 2022.

While it is high time for Philippine schools to return to face-to-face classes, Sara Duterte’s order drew criticism for supposedly not having sufficient health protocols in place.

But for the Vice President, Filipinos are more than prepared now since it has been over two years since the pandemic began.

“The difference now is that it’s easier now for Filipinos to live through the pandemic, they already accepted the mandatory wearing of face mask. They already know the basic health protocols. They already memorized these protocols because the government has been stressing its importance for two year now,” Duterte said. (READ: Young students tend to take off masks in face-to-face classes – DepEd)

Vaccination not required when schools shift to in-person classes 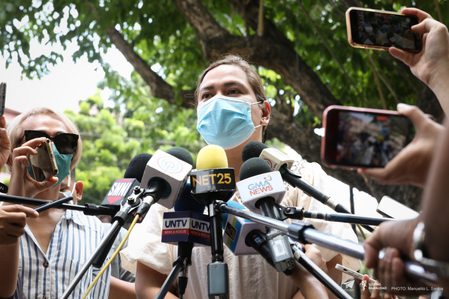 Speaking to Rappler during a protest action against President Ferdinand Marcos Jr.’s first State of the Nation Address (SONA) on Monday, July 25, Alliance of Concerned Teachers secretary general Raymond Basilio said the government needs to show parents and students that the county is ready to return to face-to-face classes.

(We understand the concern of parents and students because there’s still a pandemic. That’s why the government needs to prove to the public that it is now safe to go back to school.)

While Marcos said a lot of “promising” plans for the education sector during his SONA, he offered no details on his administration’s concrete plans for the safe return of students to schools. (READ: Are PH schools ready for face-to-face classes during pandemic?)

(Teachers are worried. We’ve run out of alcohol supplies. Thermometers are stuck at 36.1°C because there are no more batteries. Foot markers have also been erased. That’s why we understand the concerns of parents.)

There are still three months left before the country fully returns to face-to-face classes, and parents, students, and teachers have one wish: for the government to make them feel it’s safe to go back to their campuses. – with reports from Almira Coleen and Ashley dela Vega/Rappler.com

[Two Pronged] My mom expects emotional support, but never gave me any when I was a child

Help your kids start the day right with a ‘tibay’ breakfast

What is gentle parenting? An expert explains